Barnett Newman’s paintings, arriving at the apex of modernism in midcentury New York, show the complex relationship between art and spirituality. 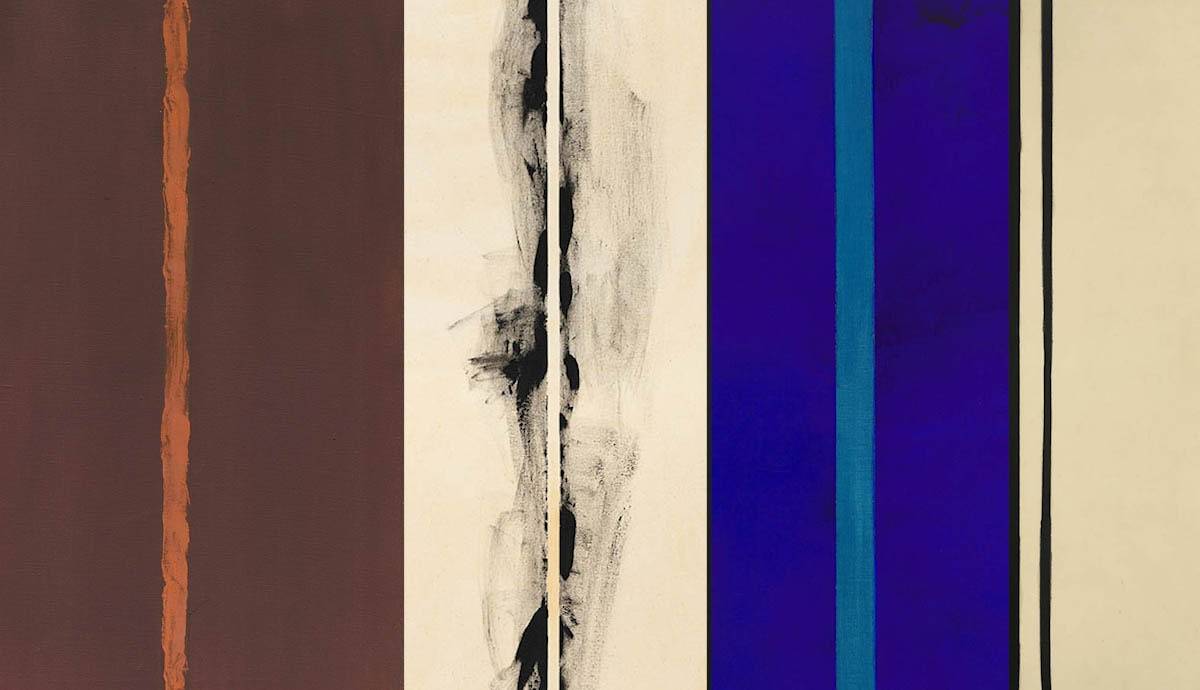 Barnett Newman was an American painter who worked during the mid 20th century. He is best known for his paintings incorporating long vertical lines, which Newman called “zips.” As well as bridging the divide between Abstract Expressionism and Hard-edge painting, Newman’s work involves a deep sense of spirituality which distinguishes him from other painters of the time. Read on to learn more about the famous artist.

Barnett Newman’s mature paintings can be identified by flat panes of solid color, cut with thin, vertical stripes. Newman came to this style relatively late in his career, beginning in a prototypical manner in the late 1940s and becoming more fully developed by the early 50s. Before this, Newman worked in a surrealist-adjacent style comparable to some of his contemporaries, such as Arshile Gorky and Adpolh Gottlieb, with loosely drawn, improvisational forms sprawling across the surface. After discovering the compositional power of these new “zip” paintings, they would completely dominate Newman’s practice for the rest of his life.

The first piece in which Newman painted a vertical line from the top to bottom of his canvas was Onement, I from 1948. This piece retains the painterly touch of Newman’s earlier work, which would diminish in the years to come. Just four years later, in Onement, V the edges have significantly tightened and the paint has flattened. Throughout the 50s, Newman’s technique would become even sharper and more precisely geometric, thoroughly hard-edged by the end of that decade. One thing is for certain, Newman bridged the gap between Abstract Expressionism and Hard-edge painting.

The appearance of Newman’s work from the 1950s forward complicates the relationship of his work to the artistic trend of Abstract Expressionism, with which he is often identified. But is Newman really an artist connected to Abstract Expressionism? The term ‘expressionism’ is not necessarily relevant to Newman’s work, at least as far as its typical meaning in art is concerned. These abstract paintings surely have an emotional dimension, but lack the spontaneity, intuition, and vigor associated with abstract expressionist painting. Newman would reduce the visibility of the human touch in his paintings as his career progressed.

As a result, much of the work that Newman produced from the 1950s until his death is difficult to regard purely as Abstract Expressionism. With these paintings, Newman traces the course of mid-century abstract art, moving from more expressive tendencies towards a negation of the work as a man-made object. Always, however, Newman is refining his approach to this one composition: A solid ground, divided with “zips.”

The Spirituality of Newman’s Work

Moving beyond their formal qualities, and speaking instead on the purpose and effect of Barnett Newman’s paintings, they are just as closely related to Byzantine and Renaissance religious art as to the work of Newman’s contemporaries. A parallel can be drawn, as well, to the Romantic painters of the 19th century, such as Caspar David Friedrich, and their pursuit of the sublime through nature. Indeed, Newman’s flat expanses of color sought to induce a sense of spiritual awe, though, of course, by rather different means than pre-modern painters of religious scenes, or by the Romanticists’ conventional representations of the natural world.

Newman himself explained this difference very well when he wrote that a “desire to destroy beauty” was at the heart of modernism. That is, a tension between an expression and its mediation in observance of aesthetic beauty. In practice, this means that Newman removed all barriers to and proxies for spiritual, sublime experience, in order to push his art as close as possible to a spiritual experience of its own. Figures or representations of any kind are abandoned in Newman’s work; symbols and narrative are unnecessary, or even detrimental, to achieving closeness to god. Rather, Newman’s notion of the sublime saw fulfillment in the destruction of representation and references to actual life. For him, the sublime was accessible only through the mind.

In an interview with the art critic David Sylvester in 1965, Barnett Newman described the state which he hoped his paintings would induce in the viewer: “The painting should give man a sense of place: that he knows he’s there, so he’s aware of himself. In that sense he relates to me when I made the painting because in that sense I was there … To me that sense of place has not only a sense of mystery but also has a sense of metaphysical fact. I have come to distrust the episodic, and I hope that my painting has the impact of giving someone, as it did me, the feeling of his own totality, of his own separateness, of his own individuality and the same time of his connection to others, who are also separate.”

Barnett Newman was interested in the power of painting to help one to reckon with their own existential conditions. The reduction of image, then, can be understood as a negation of any attempt to lose oneself amid a false version of the world. Instead, it should put the viewer deeper within themselves and the truth of the world around them.

Barnett Newman’s approach to spirituality in art was and is distinctive, drawing heavily on the innovations of modernism and arguably prefiguring further developments. Still, he did not abandon the history of religious art in his practice; this connection is reified in the titles of Newman’s paintings. Many of his works are named for biblical figures or events, such as the “Stations of the Cross” series.

Though the pieces are abstract rather than imagistic, these titles are a vestige of the narrative and figurative ideas which have informed Newman and his practice. These titles help Newman maintain an overt connection to spirituality, placing him in the long lineage of Abrhamic religious art. In an analysis of Newman, the art critic Arthur Danto wrote:

“Abstract painting is not without content. Rather, it enables the presentation of content without pictorial limits. That is why, from the beginning, abstraction was believed by its inventors to be invested with a spiritual reality. It was as though Newman had hit upon a way of being a painter without violating the Second Commandment, which prohibits images.”
(Danto, 2002)

Barnett Newman’s approach here can be contrasted with religious traditions where idolatry is forbidden, such as Islam, where abstract, decorative patterns and caligraphy are common forms of art. Newman quite specifically moves past these purposefully intellectualized abstractions of language in order to pursue an aesthetic closer to the fully emotional expressions of the “first men.” As Newman puts it: “Man’s first expression, like his first dream, was an aesthetic one. Speech was a poetic outcry rather than a demand for communication. Original man, shouting his consonants, did so in yells of awe and anger at his tragic state, at his own self-awareness, and at his own helplessness before the void.” Newman is interested in finding the most essential, basic state of human existence and expressing it aesthetically. This is what leads him to reducing his compositions so thoroughly, until only a few segments of separated color remain.

Barnett Newman’s treatment of painting as something with the power to existentially uplift and fulfill distinguishes him from most other artists of the mid-20th century. Amid the bleakness of the second World War’s consequences, many artists were unable to maintain meaning in this way, and instead used their work as a way of processing or articulating a new, nihilistic view of the world. As an example of Newman’s conviction to the contrary, he once said: “if my work were properly understood, it would be the end of state capitalism and totalitarianism.” What was special to Newman in this climate was his ability to still invest art with spirituality and a genuine purpose despite the impossible horrors of the world.

The beauty and strength of Barnett Newman’s work is this unshakable self-belief, arriving at a time when such a thing was never harder to maintain. Newman once speculated as to the origins of this nearly delusional commitment to art: “What is the raison d’etre, what is the explanation of the seemingly insane drive of man to be painter and poet if it is not an act of defiance against man’s fall and an assertion that he return to the Adam of the Garden of Eden? For the artists are the first men.” (Newman, 1947) Despite the depths of humankind’s fall, or the horror of their actions, Newman always remembers what could be. Through painting, he feeds this vision and summons the courage to see it felt by others.