The Danse Macabre is a strange tradition that emerged during the Late Middle Ages. Artists depicted people dancing with decaying corpses and skeletons, to express their fascination with death. 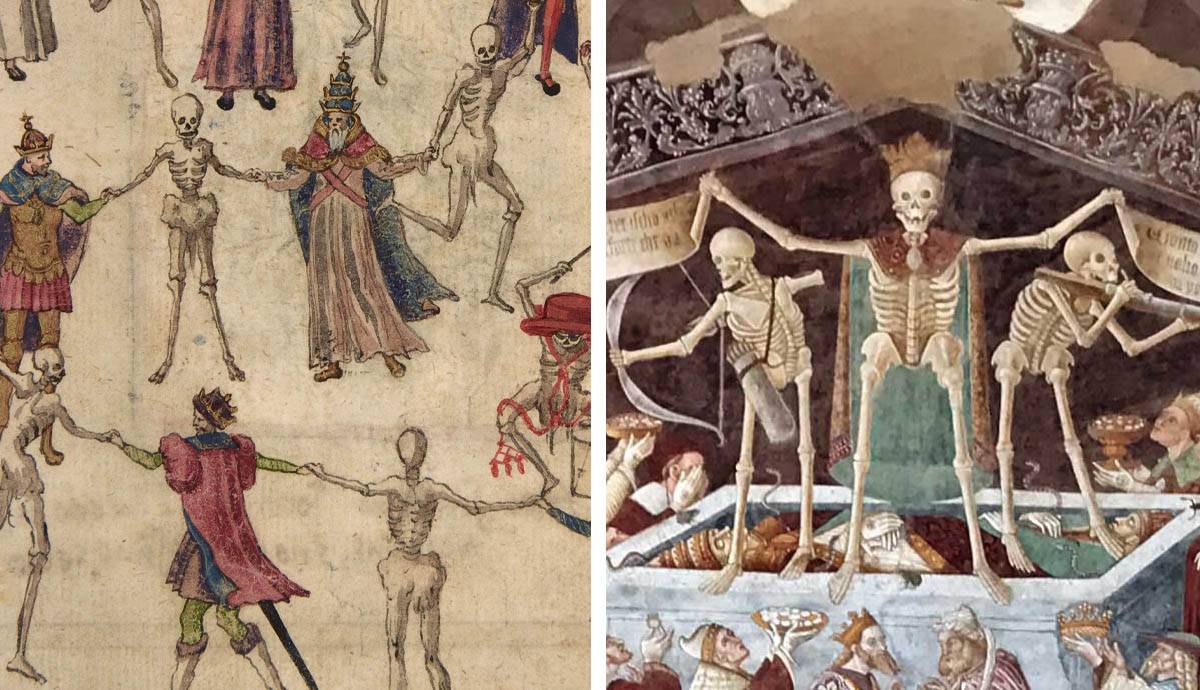 Before the 13th century, medieval artists in Europe depicted death as something peaceful, having complete confidence in Christian precepts and the guarantee of eternal life. The serene faces of recumbent effigies resting in cathedrals attest to the faith people had in the Resurrection and the afterlife. Death has always been a part of life.

However, the troubled times of the Late Middle Ages led to a new attitude towards death. People had mixed feelings of fear and fascination for macabre subjects. In this context, artists depicted the most dreadful and morbid images of skeletons and people dancing with decaying corpses, sometimes eaten by worms. They developed a new way of representing the allegory of death: the Danse Macabre.

Around 1300, Europe had reached a turning point. The feudal system was at its best, the mild climate of previous years had created abundant harvests, and the development of medieval cities and new technologies offered Europe a period of social peace. However, it did not last for long.

During the Middle Ages, life expectancy was definitely low — around 35 to 40 years old during the 13th century. At the time, numerous incurable infectious diseases spread among the population. The calamities that hit Europe and other parts of the world during the first half of the 14th century were even worse; they left a durable mark on mankind, instigating a general climate of anxiety and exacerbating the fear of death.

The first of the great disasters to hit Europe during the Late Middle Ages was the Great Famine of 1315-1317. The famine even lasted until 1322 in certain places. Repeated crop failures due to bad weather and diseases among livestock starved the European population, leading to diseases, renewed violence, and death.

Only a generation later, from 1346 onwards, several plagues decimated the continent’s population. While some forms of the bubonic plague are transmitted by animals such as rats, in the 14th-century a new disease evolved, an airborne version that spread even faster. In only five or six years, the Black Death killed between 30% to 50% of the European population, around 25 million people. Certain parts of Europe suffered from even greater losses. Germany, for example, lost 40% of its people, 50% of people died in Provence in the south-east of France, and a scary 70% died in Tuscany, Italy.

Furthermore, the numerous conflicts of the Hundred Years’ War also weakened the Old Continent. Over 116 years, between 1337 and 1453, the Kingdom of France and the Kingdom of England fought against one another over the legitimacy of France’s ruling House.

The combination of a crowded continent, less gentle weather during the 14th and 15th centuries, and grand disasters led to a shift in society. A lack of resources meant greater competition. Gradually the gap between landlords and peasants, rich and poor, deepened.

These troubled times influenced people’s perception of death. Death could occur anytime, decimating the old and the young, and entire populations of women and men in the prime of their lives. Piles of bodies were left to rot in the streets because there were too many to bury, which certainly must have traumatized the population. The prevailing gloom was transcribed in the art of the Late Middle Ages.

In this context of fear, artists found new ways to represent Death. The concept of Memento Mori, from the Latin expression “remember you must die,” became widely used in the arts and architecture of the Middle Ages. It was later known as Vanitas, a genre characteristic of 16th and 17th-century painting in the Low Countries. Memento Mori was also related to two very popular medieval Latin texts known as the Ars Moriendi, which means “the Art of Dying,” published in 1415 and 1450. Both texts explained how to have a “good” death, following the Christian beliefs of the Late Middle Ages.

As with other medieval illustrations, depictions of Memento Mori served as an educational tool for the large part of the population that was illiterate. People needed to be reminded of the futility and ephemeral condition of their mortal life, so Memento Mori became a recurring theme of late medieval art.

Surviving 13th-century sculpted effigies often have serene faces and are dressed in their finest attire, presenting a general impression of peace. From the second half of the 14th century onwards, however, artists sculpted realistic tombs; they represented what was happening below ground. These cadaver monuments portrayed the deceased’s rotting flesh or skeleton, often wrapped in a decaying shroud.

Many sculptors followed a most curious and morbid trend already established in medieval literature, drama, and the graphic arts: the Danse Macabre. The French word “macabre” appeared in France in the 1376 poem, Respit de la Mort, by Jean le Fèvre. The Danse Macabre, or Macchabaeorum Chorea in Latin, represents the pinnacle of horrific depictions of death in late medieval art, with its decaying bodies and skeletons.

Initially present in late 13th-century literature, the Danse Macabre is an allegory of Death. It shows a dance that gathers the living and the dead together, both rich and poor. People are depicted according to their social status, from the pope himself, to children and hermits. The Danse Macabre’s theme is one of social satire that exposes human vices, and it quickly became notorious all over Europe, especially among simple folk. It showed that the rich and the poor were equal when facing death, regardless of social status.

The personification of Death is often depicted leading the cortege in the Danse Macabre. This theme was depicted in different artistic forms: literature, painting, music, and choreography. Before being painted on walls, the Danse Macabre was most certainly performed in churches or sacred places.

In graphic representations, musical instruments and the figures’ positions suggest a circular dance. Yet, instead of being a merry exercise, the living are forced to dance with ghastly creatures. Dancing becomes a punishment. Christianity often regarded dancing as something dangerous, evoking pagan rituals. It could easily turn into a vice. However, during the Middle Ages, dance and religion coexisted as it was common to dance inside churches or cemeteries at Christmas or Easter.

Another curiosity of the late Middle Ages that may be related to the Danse Macabre is the infamous “dancing plague”. All over Europe, hundreds of people suffered from a strange disease that made them frantically dance in groups for several days without stopping. They often went to churches or cemeteries, as they were believed to be cursed. They offered a truly diabolical scene to viewers. Was this due to an epileptic fit or epidemic of hallucinations? The origin of the plague is still unclear.

The Dancing Plague of 1518 in Strasbourg, France, forced the city council to organize the dancing mania at different locations around the city. They even brought in musicians to let people dance until they blacked out. Dance and death were always linked.

The Oldest Danse Macabre in the Holy Innocents’ Cemetery

According to the journal of a Parisian bourgeois, a Danse Macabre was painted in 1424 in the Holy Innocents’ Cemetery in Paris, making it the first known pictorial representation of the subject in Europe. The Holy Innocents’ Cemetery was an important place located at the center of medieval Parisian life. Over the years, over 10 million bodies were buried or piled up in mass graves. In medieval tradition, it was not a quiet place but was actually quite lively. People could cut across and meet in cemeteries, buy food or goods from salesmen, or enjoy actors’ performances there. Although a sacred place, the cemetery acted as a center for everyday life.

Jehan of Orléans, the painter of Charles VI, King of France, and his brother Louis I, Duke of Orléans, supposedly painted the scene on an arcade wall bordering one of the cemetery’s mass graves. Jehan portrayed delegates of the royal and religious powers, majestically dancing among skeletons and corpses.

The Danse Macabre of the Holy Innocents’ Cemetery in Paris was destroyed in 1669 to make way for new construction in the neighboring streets. Yet, the macabre figures were widely circulated, thanks to a Parisian printmaker named Guyot (or Guy) Marchant, who reproduced the cemetery’s paintings. The cemetery’s Danse Macabre was probably the original model that inspired all other representations in Europe, initiating the macabre trend.

Numerous Danse Macabre scenes can be found on church and cloister walls, especially in France and Northern Europe. Germany, England, Switzerland, Estonia, and Finland have some of the finest examples of Danse Macabre artworks.

Prints constituted the favored medium for Danse Macabre-related subjects, as it was the most effective way to circulate ideas among the local population. Most of these fragile documents have disappeared today. So have many of the Danse Macabre paintings on church or cemetery walls. Yet, the theme became so popular that it was used on other objects of a religious and secular nature, including on curtains and metalwork in churches, jewels, furniture, and architectural elements inside people’s private homes. Danse Macabre was not only an artistic trend, it was deeply rooted in people’s lives after the Late Middle Ages.

The theme continued to fascinate people during the 15th and 16th centuries. In 1526, Hans Holbein the Younger designed a series of woodcut models, the Dance of Death series. The famous Danse Macabre of the Dominican monastery cemetery in Basel, Switzerland, inspired him to create scenes that show Death startling men practicing everyday occupations.

Later, the theme was taken out of its religious context, and artists used it to criticize the ideas of their time and to comment on politics. For instance, the Danse Macabre strongly appealed to artists of the Romantic movement. Though firmly linked to the context in which the theme flourished, the Danse Macabre has become a recurring theme in art history. After the troubled period of the late Middle Ages, death has fascinated people and artists, and has been portrayed allegorically in an abundance of artwork.