HomeStoriesFascinating Facts from the Bas-Reliefs of Persepolis

Fascinating Facts from the Bas-Reliefs of Persepolis

The bas-reliefs of ancient Persepolis not only symbolized the greatness of Persia to ancient visitors of the King, they also continue to provide interesting facts about Persia to this day. 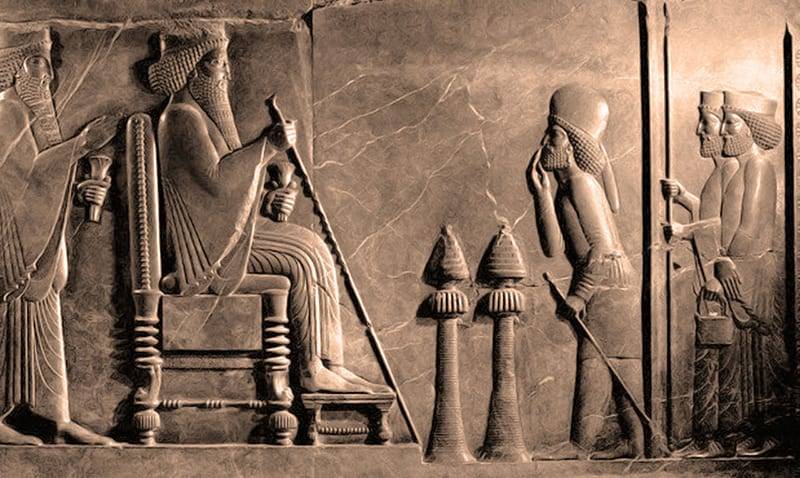 Bas-Relief is a sculptural technique where the artist carves his subject out of a flat, solid background. Relief can be done in varying degrees, from bas relief, a shortening of the Italian word “basso-rilievo,” just meaning low relief, to high relief.

What is a bas-relief?

In high relief, the figures and subjects extend further from the background; generally by more than half of the sculpture’s mass. Conversely, the bas-relief remains a shallow sculpture, with figures that barely protrude from the surface behind. These techniques can be used to varying degrees, even within the same piece of artwork, as in Lorenzo Ghiberti’s Gates of Paradise in Florence, which utilizes high relief for the main foreground figures and bas-relief to depict the background environment.

As one of the oldest forms of art, bas-relief has been used by many different civilizations. Some of the earliest discovered bas-reliefs were carved into rock caves around 30,000 years ago. The style became immensely popular in the ancient empires of Egypt, Assyria, and later Persia.

Combined bas-relief and high-relief was a particular favorite in Greece and Rome. These reliefs from ancient civilizations have proved invaluable for historians in the reconstruction of past cultures and events, and perhaps none more so than the intricate bas-reliefs of the palace at Persepolis.

Persepolis and the Persian Empire

The bas-reliefs of Persepolis were carved when the Persian Empire was at the heights of its great power. In 559 B.C., frustrated by the tightening grip of the Median Empire, Cyrus the Great had ousted the former king, established the new Persian Empire, and quickly consolidated territory. By the time Darius the Great, Cyrus’s great-grandnephew reached the pinnacle of his rule, the Persian Empire encompassed the majority of what is now the middle east, northern Africa, west and central Asia, and even to the Indus valley in India.

This grand empire required a capital to match it, and in 515 B.C., the earliest construction began on Persepolis, an entirely new metropolis located in the mountains of modern-day Iran. Too remote to serve as the day-to-day center of administration, its true function was that of a grand ceremonial center, particularly in audiences for foreign dignitaries and the celebration of Nowruz, the Persian New Year. Cyrus may have chosen the site, but in the end Darius oversaw most of the design and construction of the key imperial buildings. He commissioned sculptors to adorn these buildings with numerous and extravagant bas-reliefs.

Though the Persians did make records through inscriptions and some writing, their historical tradition was largely oral and pictorial. The beautiful bas-reliefs not only displayed the history and glory of the empire to ancient visitors, but they have continued to tell their story to modern viewers, providing valuable insight into the once-great civilization.

Life imitated art in the Apadana

One of the key indicators as to the identity of the Apadana, the ornate audience hall in the palace complex, was the collection of bas-relief sculptures lining its walls and staircases. The images depict guards, courtiers, and ambassadors from every corner of the Persian Empire. Historians and archeologists have been able to identify the individual delegations, including Egyptians, Parthians, Arabs, Babylonians, Nubians, Greeks, and many, many more. Not only do the reliefs provide evidence of the nations that paid tribute to the Persians, but they also provide historians with important details regarding those nations, and especially of the commodities and values associated with them.

A group of Armenians brings a stallion, supporting a report of Greek writer Strabo that the Armenians paid Darius with 20,000 colts. The Indian delegation brings gold and a buffalo, and the Nubians from southern Egypt present an elephant’s tusk and an okapi. Historians have even traced the movement of one-humped and two-humped camels with the assistance of the Persepolis reliefs, the one-humped camel being presented as a tribute by many of the Arabian delegations, the two-humped appearing with Iranian cultural groups.

All reliefs point to the king, but also reflect the overall nature of the kingdom

Perhaps the most exotic and cherished tribute came from the Susians, who are shown presenting Darius with a lioness and her two cubs. The lion was a traditional symbol of royalty in Persia. Representations of lions can be found frequently in Persepolis, for the city’s entire purpose, after all, was to direct attention to the great king of Persia. The central relief, now displayed in the Archaeological Museum of Tehran, brought the focus of the room and all its carved figures to the image of Darius, seated on his throne, flanked by his son, and receiving the tributes of the visitors.

The figures can be recognized as Darius and his son Xerxes as they commissioned the work, but the reliefs are also intentionally ambiguous, not capturing any unique features of Darius himself. In that way, the relief serves also as a larger, symbolic depiction of the strong Achaemenid royal line, great king and ready successor, at the center of the great Persian Empire.

Somewhat unique to ancient kingdoms is the tolerance of the Persian king and empire reflected in those images of the monarchy. Where Greek and Roman art often shows their leaders crushing surrounding nations, the Persian courtiers are shown leading them by the hand to come before Darius. It was a powerful piece of propaganda for all those who entered the halls, but also largely true. Having been violently subjugated by the Assyrians, Cyrus worked to build an empire that would integrate its conquered nations and remain respectful of their cultures and religions.

Persepolis reliefs depict one of the oldest known mythological motifs

In four separate locations around the Persepolis, the palace is an image of a lion in conflict with a bull. This motif dates back at least as far as the Stone Age, and its exact meaning is still being debated today. In one sense, the struggle is a loose symbol for eternity, the constant tension of life versus death and each releasing the other.

The Persepolis relief is thought to perhaps symbolize the defeat of winter, represented as the bull, by the spring equinox in the form of the lion, thus reflecting the New Year celebration that the palace housed. Yet curiously, while the lion was a symbol of Persian royalty, the bull was traditionally the symbol of Persia itself. In the permanent stone struggle of the lion and the bull, there may be a reflection of the monarchy itself. The lion dominates the bull, and yet the lion cannot live without the bull either.

As striking as the bas-reliefs are now, they are only a shadow of their original glory

Scientists have performed tests on surface samples taken from the limestone reliefs at Persepolis and found that the reliefs were all painted in their day. They have been able to identify pigmentation derived from Egyptian blue, azurite, malachite, hematite, cinnabar, yellow ochre, and even a rare green mineral, tyrolite. As impressive as the sculptures are today, imagine how awe-inspiring they would have been when decorated with vibrant color.

Persia’s dominance came to an end with the arrival of Alexander the Great of Macedonia. He and his soldiers took Persepolis in a state of heightened tension. Long-simmering fury over the Persian sack of Athens a century before, upset at having just fought their most costly battle yet at the Persian Gates, and anger at the discovery of a number of Greek prisoners who had been horribly tortured and mutilated by their Persian captors, whipped the battle-hardened soldiers into an emotional firestorm. Late one night, the most important ceremonial buildings went up in flames.

It remains uncertain whether the fire was a decision made in calculated vengeance or the results of a courtesan goading the drunken Macedonians. Alexander is said to have regretted the destruction, but the damage was already done, and the haunting evidence of it still remains. Brick walls in the Apadana bear the color change indicative of searing temperatures. Large amounts of rubble cover the courtyard between the Apadana and the Hall of a Hundred columns from where the fire collapsed the wooden ceiling of the structures. In the palace buildings, archaeologists found charcoal and ash covering the floors, and some columns even still bear the black scorch marks of the fire.

Ironically, the disastrous fire actually does have a modern silver lining. The inferno collapsed the walls of the building that housed the Persepolis Administrative Archives and buried the tablets beneath. Without the protection of that debris, the tablets would likely have been destroyed over the following thousands of years. Instead, archaeologists were able to carefully excavate and preserve those records for further study.

By Marian VermeulenBA History and PhilosophyMarian has been a devoted student of the ancient world since primary school. She received her BA in History and Philosophy from Hope College and has continued researching and writing on topics of ancient history from the Assyrian Empire to the Roman Empire and everything in between. She enjoys dabbling in historical fiction, but generally finds the actual true individuals of history and their stories more fascinating than any fictional invention. Her other passion is horses, and in her spare time she enjoys starting young horses under saddle and volunteer training for the local horse rescue.