HomeStoriesThe Cult of Reason: The Fate of Religion in Revolutionary France

The Cult of Reason: The Fate of Religion in Revolutionary France

The French Revolution is one of the defining episodes of modern history. What was the role of religion and the Cult of Reason, in relation to France’s national identity? 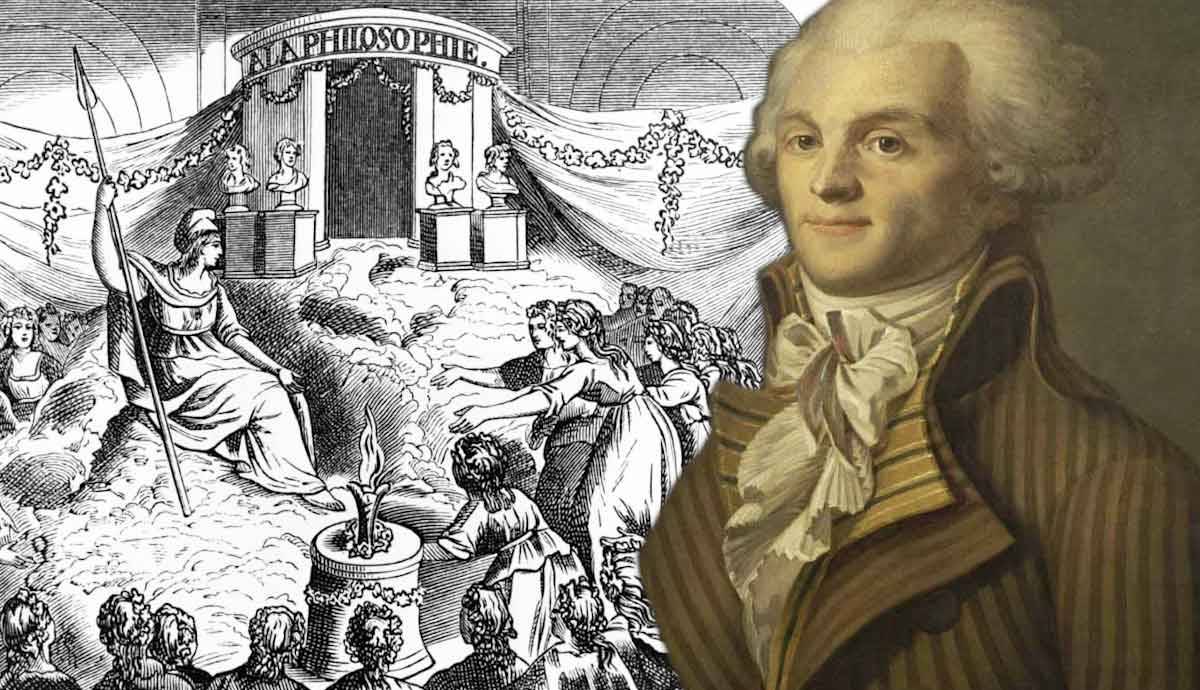 The French Revolution was one of the most tumultuous periods in European political history. Within this time frame, a centuries-old monarchy was abolished, new ideas took root across social classes, and the earliest flickers of national consciousness emerged. Modern France would not solidify until the late-nineteenth century, but its beginnings lie with the French Revolution.

Although the French Revolution was first and foremost a political phenomenon, other factors were at play, too. Religion, once exclusively the domain of the Roman Catholic Church, would become one of Revolutionary France’s most contentious arenas. Wherever religion was (or wasn’t), politics was right next to it. Some revolutionary leaders sought to replace the Catholic Church outright. Their solution was the Cult of Reason.

However, the Cult of the Supreme Being would not last long. Religion and politics occupied opposite ends of a seesaw, and the French state was stuck in the middle.

Religion in France Before the Cult of Reason

For over nine hundred years prior to the Revolution, the Catholic Church dominated the French religious sphere. Under the Bourbon dynasty, French kings forged a close partnership with the Church, both at home and abroad in Rome. By the eighteenth century, the Church was France’s largest landowning body, and aristocratic members and tithing provided it with massive amounts of income. Religious minorities, such as Protestants and Jews, faced persecution by the Crown and they could not publicly express their beliefs. The Catholic Church sometimes referred to France as “the eldest daughter of the Church”.

The Church would face its first major challenge during the early years of the Revolution. Many of France’s poorer residents, and some prominent ones, resented the clergy’s wealth and ties to the monarchy. As early as 1789, the new National Constituent Assembly had done away with tithing and had seized control of the Church properties. In July 1790, after much internal debate, the Assembly would pass the Civil Constitution of the Clergy. This law required Catholic priests to pledge their allegiance to the French nation. While some did so, others — labeled the “refractory” clergy — refused. The internal conflict would plague the Church for years to come.

At times, the anticlerical sentiments of the early Revolution turned violent. Mobs destroyed churches and monasteries in cities across France. However, not everyone supported such drastic measures. In one instance in December 1794, parishioners in the town of St. Bris gathered to resist the attempt to close their local church. The nature of religious practice had become a public battleground, setting up what has since become a major theme of modern French history.

In the vacuum left by the suppression of the Catholic Church, some leading revolutionaries sought to create alternative systems of belief to unite the newly formed republic. The first of these attempts would arouse intense emotion from all sides of the ideological spectrum: the Cult of Reason. Although it did not survive for long, the Cult of Reason would be followed by its successor systems. These short-lived religious experiments would define the careers of a number of famous revolutionary men — and even lead to their undoing.

Many Thinkers, Many Thoughts

From its inception, the Cult of Reason was not a unified system of thought. Its ideas reflected the ideological views of a number of revolutionary politicians, publishers, and journalists. Some of these figures also frequently fought with each other in their jockeying for political power. After all, the idea of creating a religion out of Revolutionary ideals was an inherently political project.

Perhaps the most radical proponent of the Cult of Reason was the newspaper editor Jacques Hébert. A harsh critic of the old monarchy, Hébert developed a sizeable following among the sans-culottes — poorer, working-class Frenchmen and women who supported the Revolution. He was also a militant anti-theist. To Hébert, the Revolution had to supersede Catholicism as France’s dominant ideological guide. In effect, the French Revolution was Hébert’s religion.

The printer Antoine-François Momoro was another major proponent of the Cult of Reason. He shared many of Jacques Hébert’s political views, from the end of the monarchy to anti-Catholicism. On November 10, 1793, Momoro, Hébert, and their allies organized the Cult of Reason’s first festival. They seized churches and repurposed them as “Temples of Reason,” dedicated to the exaltation of the Revolution’s more secular values of liberty and philosophy. Physical reminders of this period in French history still exist today.

It is difficult to determine how popular their new Cult of Reason actually was, although it does seem to have attracted working-class support. Additionally, outside sources’ depictions of its festivals as amoral and atheistic celebrations may not be entirely reliable. However, the Cult evidently disgusted one of the Revolution’s most famous figures, Maximilien de Robespierre, and the Committee of Public Safety, France’s de facto ruling body. To Robespierre, “atheism” was a social evil, and thinkers like Hébert and Momoro a threat to public security and morality.

Reason Rebuked: The End of the Cult of Reason

Hébert, Momoro, and other radical revolutionaries quickly directed their political diatribes against Robespierre, accusing him of being insufficiently committed to the French Revolution’s mission. Between their alleged absence of morals and their attacks on his authority, “The Incorruptible” Robespierre had had enough.

On March 13, 1794, the Committee of Public Safety arrested both Hébert and Momoro. The two men, who had tried to incite a revolt against Robespierre and the Committee, were dealt with mercilessly. Their trials were brief; neither of them was allowed to defend their actions. Eleven days after their arrest, Hébert and Momoro faced the death penalty. As many of its ideological fathers succumbed to the wrath of Robespierre, the Cult of Reason faded from existence. Yet the concept of a religious replacement for Catholic Christianity persisted in an ironic place: the mind of Robespierre himself.

Robespierre and the Cult of the Supreme Being

Few things seem to have occupied Robespierre’s mind as much as issues of morality. Like his fellow leaders of the Revolution, he resented the power the Catholic Church had possessed under the monarchy. However, the idea of atheism was just as repugnant to Robespierre’s sensibilities. A new, revolutionary religion had to guide the people’s sense of morality.

By May 1794, Robespierre had eliminated both Hébert’s faction and that of another opponent, Georges Jacques Danton. Seemingly feeling more secure in his position, Robespierre moved ahead with his goal of reshaping France’s devotional landscape. He got the National Convention to pass a decree on May 7, creating a new state creed known as the Cult of the Supreme Being. In his religious thinking, Robespierre was heavily inspired by Enlightenment philosophers, some of whom promoted the concept of a less personal creator deity. Oddly enough, like his old enemy Hébert, Robespierre would consider the Revolution itself a form of religion.

Robespierre would put his plan for the Cult of the Supreme Being into action on June 8, 1794. On this date, the Committee of Public Safety oversaw a massive festival in Paris dedicated to the new “Supreme Being”. Citizens could submit their own patriotic songs for the festivals, and the Paris celebration attracted a large following. The famous painter Jacques-Louis David helped organize the festivities, which culminated in the burning of an effigy of atheism atop an artificial mountain. Over the next few weeks, other parts of France held their own versions of the Paris festival. The Cult of the Supreme Being — or at least the patriotic festivities it promoted — seemed to be a success.

Critics of Robespierre, however, were quick to call him out for his alleged hypocrisy. After all, Robespierre had personally led the Supreme Being festival in Paris. They claimed that he had put himself at the center of attention again — anathema to French republican theory. The Cult of the Supreme Being may have attracted sizeable crowds, but it was essentially Robespierre’s pet project.

Supreme No More: The Thermidorian Reaction

Unfortunately for Robespierre, his time as head of the Committee of Public Safety and his heavy-handed style of leadership made him many enemies. On July 27, 1794, these enemies sprang into action. The violent arrest of Robespierre was swift, and his execution by guillotine even swifter.

Known to historians today as the Thermidorian Reaction, this coup d’état shook up the French Revolutionary state. The Jacobin Club’s so-called “Reign of Terror” ended; now it was the Jacobins who found themselves being purged. The so-called Thermidorians — a fractious grouping of anti-Jacobin forces — abolished the National Convention in August 1795, replacing it with the Directory. The Cult of the Supreme Being would die with Robespierre, failing to leave a permanent imprint on religion in France.

Several years after his rise to power, Napoleon Bonaparte would officially outlaw both the Cult of Reason and the Cult of the Supreme Being. Robespierre’s experiment with creating a patriotic, secular religion for France had ended in disaster.

Epilogue: The Failures and Successes of the Cult of Reason

The Cult of Reason did not achieve much success on its own. Its lack of philosophical cohesion led to its failure to take root outside of the minds of its creators. Additionally, the anti-theistic impulses of some of its most influential proponents angered Revolutionary authorities. Within a year, the Cult of Reason had collapsed, brought down by the political struggles of the day.

Robespierre’s Cult of the Supreme Being saw more success. Its annual festivals attracted multitudes across France. Yet it, too, would collapse rapidly — another victim of the political squabbles over the direction of the French Revolution. By 1802, its recognition had been banned.

What did linger in French political ideology was the early Revolution’s anti-clericalism. In the more than 230 years since the end of the Bourbon monarchy, religion has been a political flashpoint in France. The French state has gone back and forth from backing the Catholic Church to expressing strict secularism. Today, French law regarding the public display of religious symbols remains harsh. The Cult of Reason and its successors may have been a broad failure, but the ideological impulses that birthed them have endured well into the modern era.