HomeStoriesThe History of Rugby: The Most Brutal Sport

The History of Rugby: The Most Brutal Sport

With a rich and exciting history, rugby is one of the world’s most popular (and most physical) sports. 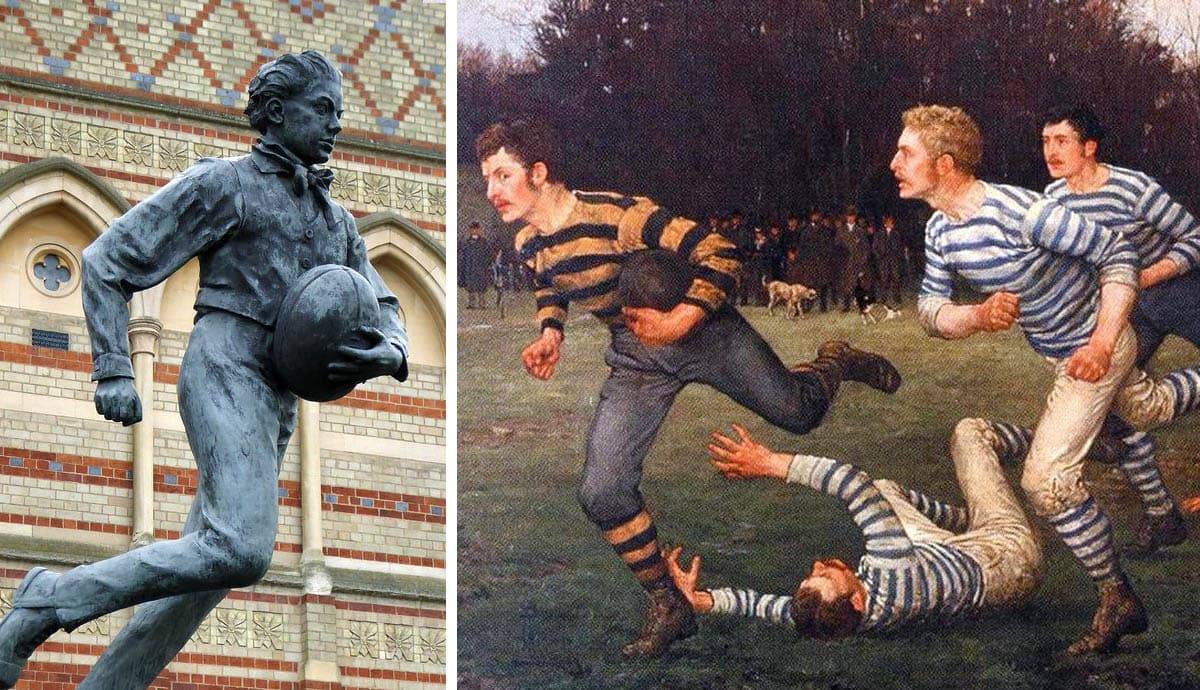 With a massive geographical footprint and almost half a billion fans worldwide, rugby ranks as one of the world’s most popular sports. Rugby is extremely brutal, and it regularly produces serious injuries. Nevertheless, rugby is also a beautiful game that requires huge levels of skill and athletic intelligence.

From its folk roots and malleable rules over a thousand years ago through the era of William Webb Ellis and the split between Rugby Football Union and Rugby Football League, to the modern game embodied in schools, leagues, clubs, national teams, and the World Cup, Rugby has a vibrant and interesting history.

The game of rugby, like American football, is derived originally from soccer. Various soccer-like games have been played throughout history across many ancient and medieval states and kingdoms. In England, where rugby originated, games similar to soccer are thought to have been introduced during Roman times. (The Roman occupation of Britain lasted from 43AD to 410AD.)

From the 14th and 15th centuries, right up until the 19th century, various forms of “folk” or “mob” football were played. Two versions of this game emerged: one in which the ball was maneuvered with the legs and feet and one in which the ball was picked up and carried. These games were notable for being particularly violent and had very little in the way of rules. It was not unusual to see fighting, broken limbs, and sometimes even death during one of these matches. Large games played between communities would usually consist of as many players as they could muster. The playing fields were immense; there could be miles between the two goals, with the houses of the opposing captains being used as such. Match reports often read similar to the reports of modern rugby games, with every inch of detail being recorded.

In 1336, King Edward III banned the playing of folk football, as it was seen to be a distraction from mandatory archery practice. At the time, England put an extremely high priority on producing longbowmen for its army. In addition, folk football drew noise complaints from merchants in cities and could also be used as a cover for violent protests. The ban remained in place until 1667. Despite the ban, people continued to play, knowing that it could result in imprisonment. Unruliness also prompted a ban on football in Scotland in 1424, and a similar game in France called la Soule was also banned.

Needless to say, versions of football where one could carry the ball were popular and continued to be played long before the supposed actions of Rugby’s anecdotal founder William Webb Ellis, who is reputed to have picked up the ball during a school soccer match in defiance of authority. William Webb Ellis attended Rugby School in Warwickshire from 1816 to 1825, yet evidence shows a form of Rugby football was played for at least 200 years prior to his attendance.

The reasons for this myth are rooted in Britain’s rigid class system. Rugby School was, and is, a “public” school (the same as a “private” school in the US) and was associated with Britain’s wealthy elite. The rules for Rugby Football Union came about in 1845, and the sport became immensely popular throughout England. A significant issue would cause a schism in the sport – the game was played by wealthy elites in the south and by the working-class in the north.

Clubs in the north wanted their working-class players to be compensated for time away from work while touring and for injuries incurred while representing their team. Rugby Football Union authorities responded by claiming that if the players couldn’t afford to play, then they shouldn’t play at all. In response, the clubs of Northern England broke away from the Rugby Football Union. They created their own Northern Union, which later became known as Rugby League, which evolved different rules to those imposed by Rugby Union.

Before this schism happened, however, a former member of Rugby School, Matthew Bloxam, refused to accept the idea that the game’s origins were not rooted directly in his school and had started the myth that the game was invented by a fellow student named William Webb Ellis. This myth gave the Rugby Football Union its authority over the sport. Still, when the Northern Union launched an inquiry in 1897 into the origins of the sport, Rugby School hastily erected a commemorative plaque stating that William Webb Ellis, “with a fine disregard for the rules of football as played in his time first took the ball in his arms and ran with it.” Despite there being no evidence other than the letters of an old man whose story changed each time he wrote it, the Rugby Football Union persisted. Its version of the sport eventually became the most popular, all the while maintaining their story of William Webb Ellis.

The first international rugby match was played in 1871 between England and Scotland, with Scotland emerging as the victor. In 1883, the annual Home Nations Championship began, which included the national teams of England, Scotland, Wales, and Ireland. In 1910 the competition expanded to include France and was renamed the Five Nations. In 2000, Italy was granted admission into the tournament, which is now known as the Six Nations. 1883 was also the year when rugby sevens were introduced: a game format where the team size is limited to seven players. The game is extremely fast-paced and short, lasting only 14 minutes, in contrast to rugby union and rugby league matches which last 80 minutes.

Rugby also spread all over and to the furthest reaches of the British Empire. In the 1860s, rugby was introduced to Australia, New Zealand, South Africa, and Canada. However, international matches involving these countries were logistically unfeasible, and it was only until commercial flights became available that international rugby began to be played regularly between teams from different continents.

In the early 20th century, the Southern Hemisphere sent its national teams to play in Britain, with New Zealand in 1905, South Africa following in 1906, and Australia in 1908. In 1905, a match between New Zealand and Wales started with the New Zealanders performing the haka, to which the Welsh responded by singing their national anthem. This was the first time a national anthem was sung at an international sporting event.

In the early 20th century, rugby union was included in the Olympic Games four times, the last time being in 1924 (the USA won gold). Two world wars and economic depression, however, took a toll on all international sports. In the second half of the 20th century, international tours became more common. The first internationally sanctioned rugby sevens tournament was held in 1973, and the Rugby Union World Cup was inaugurated in 1987. To date, the World Cup has been won by South Africa (3 times), New Zealand (3 times), Australia (twice), and England (once). In 2016, rugby returned to the Olympic Games in the form of rugby sevens.

While many countries have rivalries of their own, rarely is there a rivalry between geographic regions encompassing continents. In rugby, there is a constant rivalry between the northern and southern hemispheres, with different playing styles and differences in the how the game is refereed. The latter has been an issue many times.

While the northern hemisphere plays the Six Nations, the southern hemisphere has its own competition. In 1996, the Tri-Nations competition started, which involved South Africa, New Zealand, and Australia. In 2012, the competition was expanded to include Argentina and was subsequently renamed The Rugby Championship.

During the second half of the twentieth century, rugby took hold in many countries across the world. It became the most popular sport in many countries of various geographic and cultural backgrounds, such as Georgia, Madagascar, Namibia, Tonga, West Samoa, and Fiji. The sport has also encountered much interest and growing popularity in Japan and other countries in East Asia. This is partly due to the rugby sevens format, which has made the game very accessible for many countries. Every year, Rugby Sevens tournaments are hosted by the same cities, including Las Vegas, Dubai, and Hong Kong.

In the United States, rugby remains popular but not at a professional level, as it is overshadowed by the National Football League (NFL). With a huge total of 2588, the United States has the biggest number of rugby clubs in the world.

Women’s rugby has also grown alongside men’s rugby, with games being played as early as the 1880s. The first attempt at an international tour (from England to New Zealand) was canceled due to public outcry by people who regarded rugby as an exclusively male pastime. Despite the challenges, women’s rugby inevitably triumphed. Sometimes games had to be held behind closed doors, away from the public. In 1921, however, a women’s rugby league match was played in Sydney to a crowd of over 30,000 people. Due to pressure from the authorities, the game was not repeated.

Continuing to defy society’s gender roles, women pressed on, and women’s rugby endured and succeeded in gaining popularity until it was fully accepted, and the Women’s Rugby Football Union was formed. In 1991, the first Women’s Rugby World Cup was held and has been held every four years since. The United States won the inaugural event. Since then, New Zealand has won it five times, and England has won it twice.

There is much positivity for the future of rugby, especially as an amateur sport. With a huge number of competitions worldwide, international rugby competitiveness has reached new highs and will undoubtedly be augmented by the addition of countries where rugby is growing in popularity. Despite the setbacks caused by the Covid pandemic, rugby is emerging with much strength.