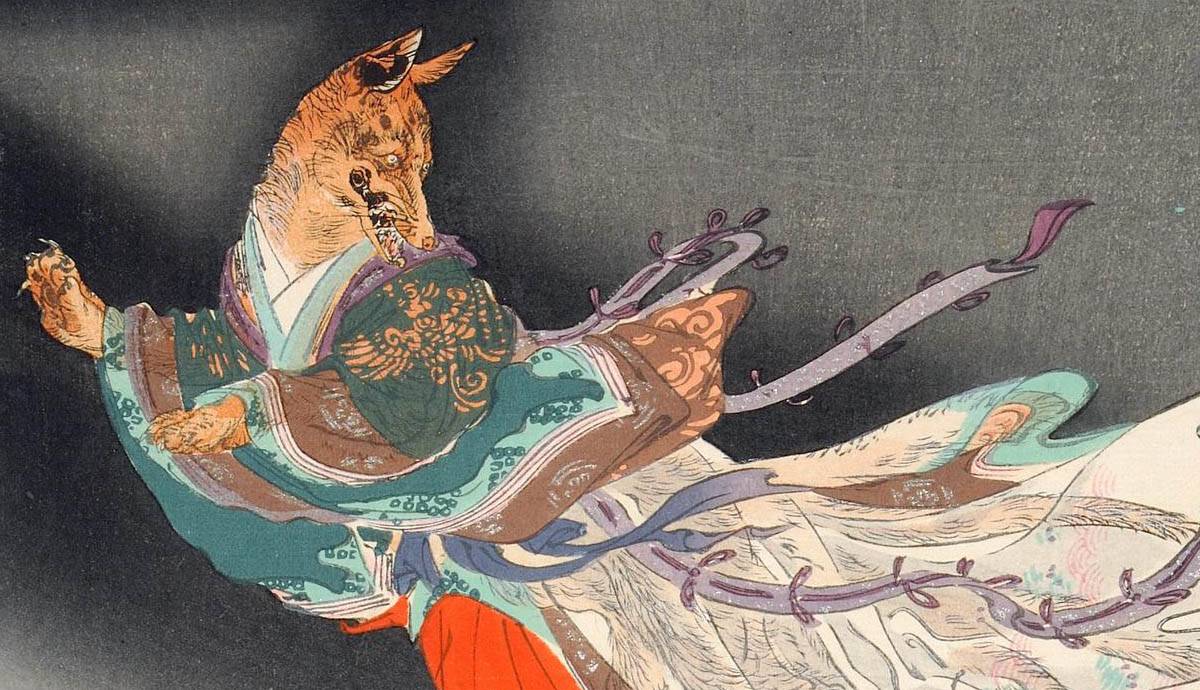 Nothing gives you quite as much insight into Japan’s traditional culture as learning about its mythical creatures. These unique supernatural beings, or ようかい(youkai) as they are called in Japanese, are mischievous creatures that can either be purely evil or help you out in times of need, for a price of course. Compared to Western mythology, Japanese mythical creatures tend to have much more creative designs, from amalgamations of different animals to flying heads and inanimate objects coming to life.

A lot of these mythical creatures are benevolent, but some can be terrifying and have served as inspiration for many Ukiyo-e Japanese artists as well as Japanese horror stories. Below, you can find out more about some of the strangest Youkai found in Japanese mythology.

The first, and possibly one of the most widely known youkai, is the raccoon dog, also known as Tanuki in Japanese folklore. Although tanuki are real animals found in the Japanese wild, they have inspired many legends and folktales in Japanese mythology about the so-called Bake-danuki (lit. monster raccoons).

Bake-danuki are powerful, mischievous creatures with a cheerful, jovial personality. They are not inherently evil, but they love using their strong shape-shifting and possessing powers to prank travelers and steal their money – for no other reason than to have fun.

Although previously thought in Japanese mythology to be guardians of the natural world, nowadays, Tanuki are better associated with their trickster nature. They can shapeshift into other humans, other animals, inanimate household objects, or even parts of nature such as trees, rocks, and roots. They can take any passing travelers by surprise and play pranks on them.

The Japanese folktales definitely didn’t try to keep things child-friendly: most of the time, tanuki are depicted in art as using their overly grown testicles as a traveler’s pack, or sometimes even as drums. This has sparked another phenomenon in Japanese folklore, named Tanuki-Bayashi — people hearing drum or flute sounds coming out of nowhere in the middle of the night, possibly explained by the mischievous nature of these Japanese mythical creatures.

You can find many Tanuki statues around temples in Japan. Most often they are represented as carrying a sake bottle, symbolizing virtue, and having a big belly and big eyes, as well as a hat to protect them from bad luck and bad weather.

Studio Ghibli’s (one of the most popular animation studios in Japan) movie, Pom Poko, revolves around the lives of these Japanese mythical creatures and paints them in a positive, humorous light.

Kitsune, or mythical foxes, are yet another famous youkai in Japanese mythology. They are known to be magical, highly intelligent Japanese mythical creatures that possess many powerful magical and spiritual abilities, including shapeshifting, far-seeing, high intelligence, and longer lifespans. In Japanese folklore, kitsune can be a symbol of both good and evil and were thought to grow a new tail for every 100 years they lived on this earth. The most powerful kitsune were the nine-tailed foxes, said to have acquired infinite knowledge and the power to see everything that is, was, or will be.

Japanese mythology recognizes two types of kitsune. The first type of kitsune, Zenko (lit. ‘good foxes), describes a type of benevolent foxes with celestial powers, most well known as the divine messengers of the God Inari, protector of rice fields, prosperity, and fertility. You can find many statues depicting these elegant, supernatural youkai in shrines dedicated to Inari, spread all throughout Japan. Luckily, these temples are easily recognizable by their typical red buildings and red torii gates.

The most famous shrine built to celebrate the Inari deity is Fushimi Inari shrine, found near Kyoto, which attracts many visitors from around the globe throughout the year.

Kitsune were not always seen as divine, benevolent spirits. The other type of kitsune recognized in Japanese mythology was Yako (or Nogitsune, lit. ‘wild foxes’), shapeshifting foxes who love playing pranks on humans, or quite the opposite, reward them, depending on their deeds.

3. Kappa – The Unique Inhabitants of Lakes and Rivers

Most youkai in Japanese mythology are more than animals with supernatural powers, some are incredibly unique in appearance and have many strange abilities.

Kappa is such a youkai, considered to be a Suijin (lit. Water God). Kappa is a humanoid Japanese mythical creature with some features resembling amphibians and reptiles. They tend to look different from a Kappa to another; some have adult bodies or child bodies, with skin colored in various shades of green. Their skin might be slimy or covered in scales, and their arms and legs webbed between the toes and fingers.

As unique as they can be, all Kappa have a turtle shell on their back, a mouth resembling a beak and an object resembling a bowl on its head, in which it carries a liquid that is said to be its life force. If this liquid spills or the bowl is damaged in any way, a Kappa can become incredibly weakened or even die.

Kappa are not necessarily friendly, and might play harmless pranks on travelers, or much worse: they are known to lure humans (especially children) into their rivers to drown them. They are especially fond of Sumo, a traditional Japanese sport, and may challenge these travelers to a match. Beware, however; they are also especially good at it.

In Japanese mythology, Kappa’s favourite food were cucumbers, which led to cucumber-filled sushi rolls (or maki) to be traditionally called Kappamaki.

Tengu is another Japanese supernatural being that appears in many shapes and forms throughout history. The first Tengu depictions showed them as monsters with crow-like features such as kite-like black wings, bird heads, and beaks. Later on, newer depictions show Tengu as long-nosed creatures with red faces.

At first, Tengu were considered mischievous Japanese mythical creatures but not inherently evil or particularly dangerous, as they were quite easy to avoid or defeat. Many legends speak of Tengu as bringers of war and destruction, but they were also known as protective deities and spirits of mountains and forests over time.

There is another form of Tengu in Japanese mythology, and that is the Daitengu (lit. ‘greater Tengu’). Daitengu are an evolved form of Tengu, with more human-like features and usually depicted as some sort of monk. Daitengu wear long robes and have red faces, with long noses. Usually, their power levels are directly proportional to the size of their noses. They live alone as far away from human settlements as possible, in forests or on remote mountaintops, spending their days in deep meditation.

The purpose of Daitengu is to achieve perfection and great wisdom through self-reflection, but that doesn’t mean they are always restrained and peaceful. Some Daitengu were said to have caused many natural disasters and suffering to humans, in a simple fit of anger.

5. Shikigami – The Dark Side of Japanese Mythology

Japanese mythology has plenty of terrifying legends and creatures, and Shikigami are a great example of such entities. Literally translated as ‘ceremonial spirits’, Shikigami are spirit servants with no free will on their own that have terrified Japanese people for centuries.

Traditionally, Shikigami were considered to be servants of Onmyoji, members of Japanese society thought to possess and use divine magical powers. These Shikigami were born through a complex conjuring ritual made by an Onmyoji and they only served one purpose: to fulfill the master’s wishes. More often than not, the orders of an Onmyoji were less than favorable (such as spying on someone, stealing, or even murder). Because of that, the scariest part of these legends around Shikigami was not the creatures themselves but the terrible things that humans were capable of once they were in charge of these devoted servants.

Shikigami are mostly invisible to the human eye unless they take special shapes. Some of the possible shapes are paper dolls, some types of origami or amulets, but the most popular one is turning them into neatly and artistically folded and cut paper manikins. Shikigami can also take the shape of animals, as they are known to possess chicken, dogs, even cows, in their quest to fulfill their master’s orders.

Creating a Shikigami was not a difficult task but keeping control of one definitely was. If an Onmyoji master was not strong enough, they could lose control of the Shikigami they summoned, causing them to gain consciousness and the free will to do whatever they wanted, including killing their old master.

One of the largest, most unique categories of youkai in Japanese mythology is, without a doubt, the one of Tsukumogami.

Tsukumogami are traditionally considered to be tools or everyday household items that have acquired a kami (or spirit) of their own, after living for at least a hundred years. Although generally considered harmless, there are instances of Tsukumogami becoming vengeful towards the people who may have mistreated them or abandoned them throughout their lives.

Among these Tsukumogami there are a few that are the most famous in Japanese mythology. The first ones are Kasa-obake (lit. monster umbrellas), monsters represented as one-legged umbrellas with one eye and sometimes arms and a long tongue. It is not clear what the purpose of these Kasa-obake was in Japanese folklore, but many illustrations of them have been found throughout the years.

Another example of a Tsukumogami mostly found in illustrations is Chōchin-obake, a lantern that becomes sentient after 100 years. Being worn out, the lantern would rip open and stick out a tongue, as the opening became its mouth. Sometimes, Chōchin-obake are depicted with human faces, hands, or even wings.

Boroboroton is a great example of an evil Tsukumogami – they will not hesitate to cause harm if they believe you deserve it. Boroboroton are Japanese sleeping mats (or futon), which come alive after having been used and worn out for 100 years. They come alive after they have been mistreated for so many years, but some may also come alive if they feel neglected or needless. They hold grudges against humans, and they come out at night to strangle sleeping humans and get their revenge.

The last notable Tsukumogami is the Ungaikyō, or “mirror beyond the clouds”. Ungaikyō are haunted mirrors that show whoever looks into them a distorted, terrifying version of themselves. They are also said to have been used to capture vengeful spirits and demons inside them.

Japanese culture truly sets itself apart from the Western one, through art, lifestyle, and especially its unique, vast mythology – learning about all the different creatures present in Japanese folklore opens the doors to understanding their culture just a little bit more. 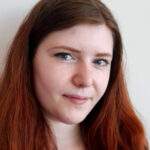 By Gabriela BabanBA Linguistics with JapaneseGabriela is a contributing writer based in the UK, currently on her way to finishing undergraduate studies and getting her BA in Linguistics and Japanese. Her interests include languages and cultures all around the world, as well as arts and mythology. She enjoys storytelling and teaching others about the subjects she is passionate about.

Nihonga: The Japanese Genre That Set It Apart From Western Style