Jeff Koons is an American contemporary artist who is both deeply loved and despised, depending on who you ask. He was born in York, 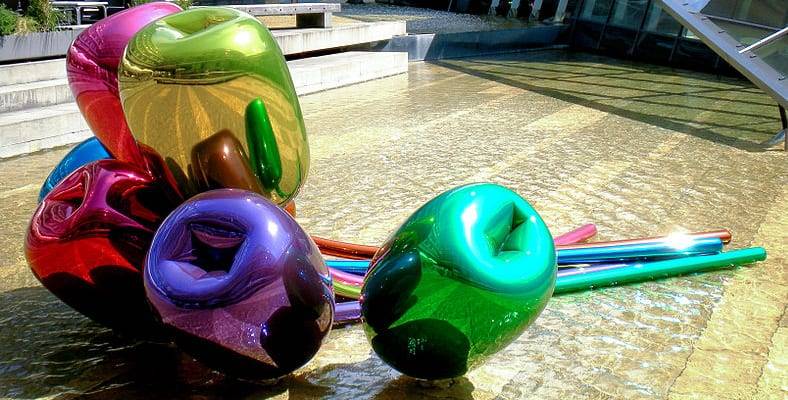 US artist Jeff Koons poses for photographs during a meeting at the French Cultural Ministry in Paris on January 30, 2018 Jeff Koons is an American contemporary artist who is both deeply loved and despised, depending on who you ask. He was born in York, Pennsylvania in 1955. Today he is the creator of the most expensive art piece by a living artist ever sold.

When he was a teenager, he was lucky enough to meet his artistic inspirations, including Salvador Dali around 1974. Taking his inspiration from a mix of pop art, ordinary objects, and iconography, Koons’ style is compared to that of Marcel Duchamp’s and Andy Warhol’s. However, Koons started his career on a different path from the usual “struggling artist” picture.

Koons earned his BFA from the Maryland Institute College of Art in Baltimore in 1976. After graduating, he became the studio assistant for pop artist Ed Paschke (also called Chicago’s Warhol). He then moved to NYC, where he started working at the membership desk at the MOMA. His next step in his career took him to the business side of the arts: he became a Wall Street commodities trader.

Working on Wall Street, he learned what it took for an artist not just to make great art, but also make money with it. He deduced that kitschy artifacts of pop icons could be styled together for sale. He used materials like metal, glass, and polyethylene. Some of his famous pieces are a bust of Louis XIV made of stainless steel, and a porcelain figure of Michael Jackson with Bubbles, his pet chimp. This style of framing famous icons with new media spoke to audiences. His pieces spoke to topics and ideas that viewers could understand.

Unfortunately, La Cicciolina’s and Koons’ marriage ended badly. They separated in 1992 and divorced 6 years later after a long battle for custody. But their creation of Made in Heaven still has a legacy, and it’s arguably what helped Jeff Koons shoot into popularity in the public eye.

Most Expensive Art Ever Sold By A Living Artist

In 2013, Jeff Koons won the title of having the most expensive art ever sold from a living artist. His piece, The Balloon Dog (Orange), sold at a Christie’s auction for $58.4 million. He toppled this record again in 2019, selling another animal-themed piece, Rabbit, for $91 million. Rabbit was a 3ft tall stainless steel figure of a bunny with a reflective face that viewers could use as a mirror. It was estimated to sell for $50-70 million but shot up to $80 million within 10 minutes of going on auction. After all auctioneer’s fees were counted, the final sale price came to $91,075,000.

Jeff Koons hasn’t been successful without a share of criticism, though. In 2015, he created a 40-ft tall high sculpture called Bouquet of Tulips for the city of Paris to honor the victims of the November terrorist attacks. His proposal was criticized by 25 French cultural figures including movie makers, artists, and politicians in an open letter to French newspaper Libération. They listed financial misplanning as part of their concerns, and they argued that the piece was too opportunistic to truly value the lives lost in the tragic event.

He also ran into controversy the year before, when an art collector sued him through the international Gagosian Gallery for failing to deliver the art he bought. The collector had paid off part of the $13 million he signed to get 4 sculptures in exchange for. The sculptures were originally scheduled to be completed on December 25, 2014. Later, the date was moved to September 2016, and then to August 2019. The collector canceled his order and filed a lawsuit by the time they announced the 2019 deadline.

There is another surprising detail about how Jeff Koons creates his masterpieces that also creates debate on artistic ethics: he doesn’t make his art himself. Some of his early work like the figure of Michael and Bubbles were made by European workshops that Jeff Koons commissioned.

In fact, like a true businessman, he runs his art studio like a production office. Jeff Koons provides the ideas, and a workshop of his assistants are the ones who do the painting, building, polishing and crafting to materialize his vision. The workshop is very fast-paced and has gained a reputation for seeing its assistants frequently fired or quitting. Hyperallergic writer Kyle Petreycik has highlighted that the traditional artist-assistant relationship is one where you work one-on-one with each other to build connections and experience. If you work for Koons, you don’t get this experience; it’s closer to a factory-like environment.

Koons has shown no sign of planning to change this system. In 2015, he moved his studio to Hudson Yards, New York. In the process, he laid off many of his workers. In 2017, he downsized his painting department from 60 artists to 30. He is also not shy of using industrial, mechanical tools for creation. He owns a stone-cutting facility in Pennsylvania called Antiquity Stone, which he also uses to create his work.

Despite this, Jeff Koons has left his legacy in contemporary art history. He is often called a “post-pop” artist, grouping him in with other important names like Keith Haring and Britto. Many see his artwork as vibrant and modern. He combines bright, neon colors with fun, relatable objects like balloon animals to make kitschy art. To put it simply, his art is fun.

Koons has been compared to the famous Dadaist pioneer, Marcel Duchamp, who was famous for creating the iconic Foundation in 1917. Artsy writer Annette Lin has compared the two, noting that they both recontextualize ordinary objects as art. Through that, both artists ask viewers important questions about sexuality, class, and consumerism.

In an interview with TheDailyBeast’s Blake Gopnik, he has answered claims that he’s a cheap industrialist. Koons says he doesn’t aim to make culture cheaper, but instead to “accept things for what they are, as they are.” In regards to the Made in Heaven series, he has encouraged, “dealing with the acceptance of oneself, and one’s sexuality… Everything in life is perfect, so I accept it.”