In 1534, the Protestant reformer Martin Luther met positively with an Ethiopian clergyman. Was Luther inspired by Ethiopian Christianity, or were his pre-existing views simply reaffirmed? 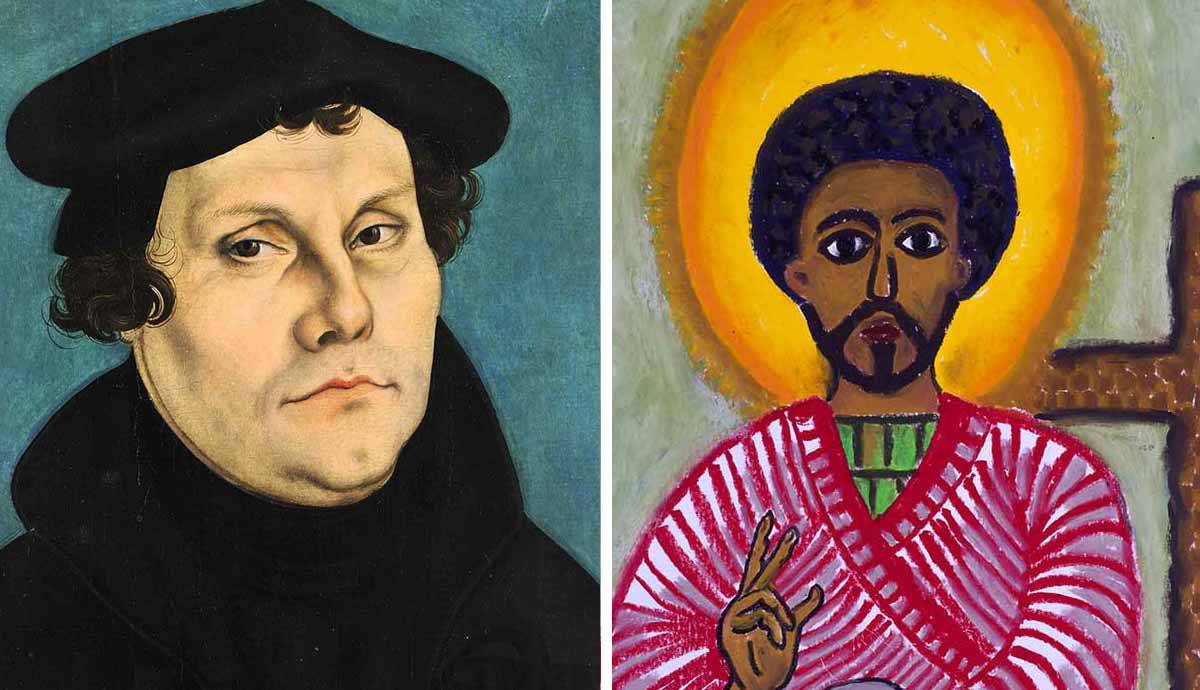 Let’s throw a concept out there: the Protestant Reformation. What comes to mind? A new focus on lay Bible reading? Promotion of vernacular languages in liturgy? Spread of ideas via the printing press and other new technologies?

All of these are good answers, and they only scratch the surface of what the Reformation was like to this who lived it. But what about religions other than Catholicism and Protestantism?

Did they play any kind of role in Reformation discourse?

It turns out that they did. Early reformers such as Martin Luther and Jean Calvin were well aware of Jews, Muslims, and other geographically close religious groups. But one interaction stands out: the dialogue between Luther and Abba Mika’el, a religious leader of Ethiopian Christianity.

How, then, does Ethiopia factor into our understanding of the Reformation? Was Luther inspired to act further by Abba Mika’el?

Formerly referred to by Europeans as Abyssinia, Ethiopia is actually Africa’s oldest Christian-majority country. The country’s official conversion to the faith of Jesus Christ occurred during the fourth century, under the leadership of King Ezana of Aksum. For over a thousand years, Ethiopian Christianity would develop in isolation from the faith as practiced in Europe and the Middle East.

Ethiopia is mentioned repeatedly throughout the Bible, including in the Book of Acts. This account features Philip the Evangelist preaching to various peoples and being met with both acceptance and resistance along the way. During his journey south from Jerusalem, Philip meets an African eunuch, said to be the overseer of the Ethiopian ruler’s finances. The Holy Spirit tells Philip to approach the man, who is reading the words of the prophet Isaiah. Philip explains the meaning of the passage to the man, who is receptive to Philip’s message. Philip baptizes the man in the river but is taken away afterward by the Holy Spirit. Overjoyed, the eunuch departs soon after. The Dutch artist Rembrandt would famously depict this encounter in 1626.

Ethiopian Christianity served as the foundation of the country’s form of kingship. From the thirteenth century until the late twentieth, Ethiopian emperors came from the Solomonic dynasty. Successive emperors claimed an unbroken line of descent from the legendary Menelik — supposedly the son of the Biblical Queen of Sheba and King Solomon. Notions of rulership in Ethiopia were thus intimately tied together with the region’s form of Christianity.

By the sixteenth century, Ethiopia’s Solomonic dynasty saw itself under siege. The Ottoman-aligned Adal Sultanate was growing in strength, and the indigenous Oromo people to the south felt restless. European contact with Ethiopia continued, especially via Portugal and Italy. The Europe Abba Mika’el would visit in 1534 would prove similarly tumultuous to his homeland.

Martin Luther and the Early Reformation in Germany

No historical phenomenona can be precisely traced back to a single event. That being said, historians usually like to mark Martin Luther’s publication of the Ninety-Five Theses as the beginning of the Protestant Reformation. This document — published on October 31, 1517, in the German city of Wittenberg — slammed the Church’s practice of selling indulgences for the forgiveness of sins. Luther found this repugnant, claiming that the Bible only gave that power to God. After this, Luther’s preaching against the Catholic Church grew more radical. Germany fractured further along religious lines, as did its geographical neighbors.

As the years went on, the Reformation splintered into competing denominations, often as hostile to each other as they were to the Pope. In Switzerland, Huldrych Zwingli led a local Protestant movement. Zwingli and Luther were at odds over a number of points in Christian doctrine, notably the theology of the Eucharist and the practice of Mass. The two men never truly reconciled.

It is important to note that Ethiopians did engage with the Catholic Church at this time. Small Ethiopian communities existed in places from Rome to the island of Cyprus. Did Abba Mika’el ever visit one of these communities?

According to Martin Luther’s associate and fellow reformer Philipp Melanchthon, Abba Mika’el arrived in Wittenberg on May 31, 1534. Melanchthon referred to Mika’el as a “wandering Arab” addressing his correspondent Benedict Pauli’s curiosity and his erroneous understanding of the Ethiopian’s origins. He also recorded notes on the first conversation between Luther and Mika’el. The exchange required a translator; Melanchthon laments that Mika’el only seemed to have a weak command of Italian and Greek. Still, it appears the Ethiopian monk and the German reformers intrigued each other. Over the next month, more discussions would follow regarding similarities between Protestant theology and Ethiopian Christianity.

Luther and Abba Mika’el’s first discussion would focus on the Christian Trinity — a topic Luther had recently preached about. The two parties claimed to agree on this important theological point, seemingly highlighting a parallel between Ethiopian and Lutheran thought. However, in reality the two branches of Christianity differed greatly regarding the nature of the Trinity. In the official Ethiopian Christianity of the time, the idea of humans being created “in God’s image” was interpreted literally, not just spiritually. What did Luther and Mika’el miss in their conversation?

The two holy men also discussed the Lord’s Supper and the Eucharist. From our modern perspective, we can identify several actual similarities. Both Lutheran Protestantism and Ethiopian Christianity argued that Jesus was entirely present in the Eucharist. Additionally, the concept of private mass — a practice so important to Luther’s Catholic enemies — did not exist in either tradition. While a closer examination free from communication hurdles would probably reveal major doctrinal differences, Luther and his Ethiopian friend appeared to be more in agreement than not overall. Abba Mika’el departed from Wittenberg on July 4, 1534. While he would never see Luther again, the Ethiopian monk had forged a bond with his German counterpart.

Luther’s Reaction to the Ethiopian Church

The conversation with Abba Mika’el left a notable impact on Martin Luther. He continued to think about the meeting three years later; writing from November 1537 recounts how Mika’el had told him, “This is a good creed, that is faith.” Luther even considered his own church and Ethiopian Christianity united, despite some identified doctrinal differences. As religious scholar David Daniels points out, Luther never said the same about his old rival, Huldrych Zwingli.

However, Daniels also argues that the Ethiopian Orthodox Church was a kind of “forerunner” to Luther’s Reformation. A close examination of the available evidence reveals this claim to be shaky at best. While Luther does repeatedly mention Ethiopia in his discussion of the early Church, he never visited the country or observed its version of Christianity directly. Had he been more familiar with Ethiopian culture, he probably would have been disgusted by much of what he saw. The Ethiopian Church’s greater emphasis on the Old Testament, similar dietary rules to Judaism, and its literalist interpretation of the “image” of God probably would not have sat well with him.

In addition, the fact that Luther and Abba Mika’el had to communicate through translators complicates things further. What did Luther or Mika’el not share with each other about their respective versions of Christianity? What was left undeciphered between the two? All of this is impossible for us to know. Nor do we know who exactly Abba Mika’el was. Was he a mainstream believer of Ethiopian Christianity? Or did he come from a branch of the faith deemed heretical by Church authorities? Unless Ethiopian evidence comes to light, we can’t answer this question, either. Martin Luther may have viewed Mika’el as an emissary for Ethiopian Christianity, but both men were limited in their understanding of each other despite their best efforts.

Conclusion: Was Ethiopian Christianity a Predecessor to the Reformation?

According to all available accounts, the meeting between Martin Luther and Abba Mika’el was constructive. The two theologians seemed to get along well, in spite of the language barrier between them. Luther especially enjoyed conversing with someone whose beliefs appeared similar to his own.

With the 500th anniversary of the Reformation behind us, some scholars have paid renewed attention to the dialogue. This has been quite illuminating as a new field of study. However, is it correct that Ethiopian Christianity could be seen as a predecessor to the Reformation? The short answer is no. The primary evidence we have is intriguing but limited. The translation issues at play in Mika’el and Luther’s dialogue mean that both men may have left valuable information out. In all likelihood, they probably misinterpreted each other on multiple occasions. Luther may have liked what he heard from Abba Mika’el, but Ethiopian Christianity cannot be seen as a precursor to the Lutheran Reformation in Europe. Instead, it was a separate development with aspects that Luther may have found aligned with his pre-existing beliefs.