HomeAncient HistoryRoman Theatre and Amphitheatre: Spectacle in the Roman World

From theatre plays to the gladiator fights in colossal amphitheatres, spectacle was an integral part of daily life and politics in Rome. 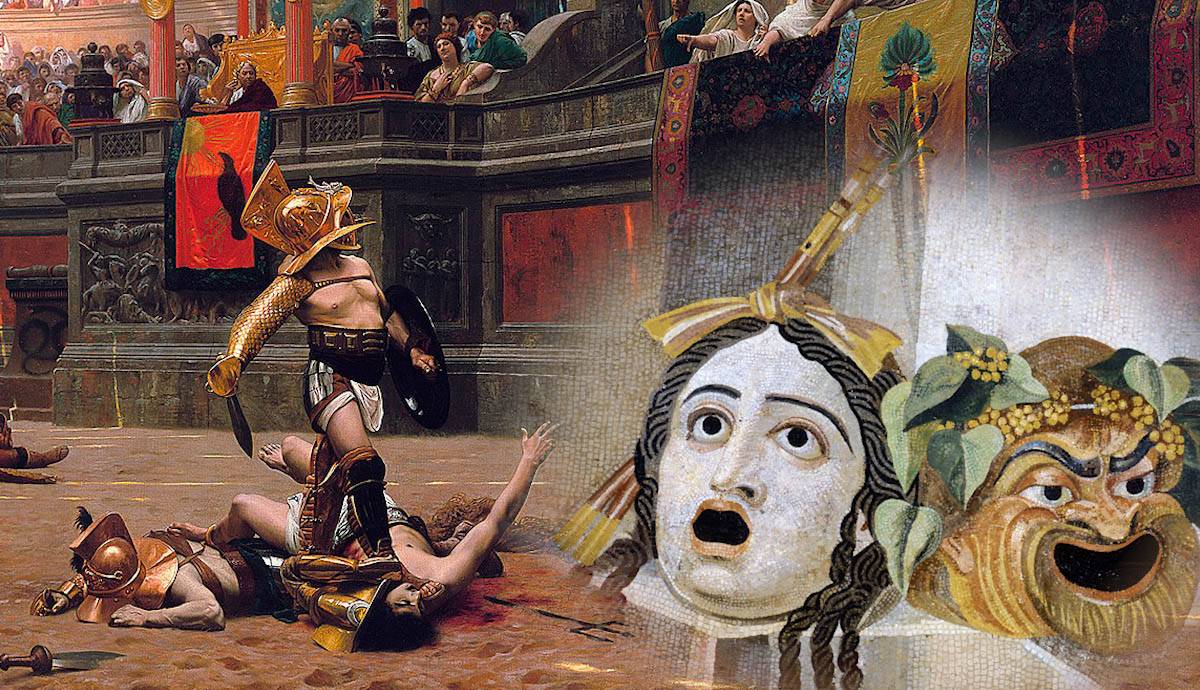 In ancient Rome, there was no shortage of entertainment. Spectacular chariot races drew in tens of thousands of Romans, who cheered for their favorite driver, their fervor occasionally turning to violence. Violence was omnipresent in bloody gladiatorial fights, which took place in colossal arenas — amphitheatres — in all major cities across the Roman world. While no blood was spilled on the stage, Roman theatres, also lavishly built and decorated, delighted the people, providing an impressive show.

However, for the Romans, the entertainment was more than pure spectacle. It was an opportunity for the rich and powerful to show their generosity. The event organizers could greatly benefit from their sponsorship. Funding the games and dispensing free food could boost sponsors’ ratings (from civil magistrates to the emperor), lighten the public mood, and lower the potential for revolt. It is no wonder the Roman authorities spent large sums of money on building entertainment venues and sponsoring a wide variety of shows and games.

The Origin of Spectacle in Ancient Rome: The Introduction of Roman Theatre

As with many other things, the Romans “borrowed” their concept of entertainment from the people they conquered. The theatre was introduced to the city on the Tiber by the Etruscans around 364 BCE. In the beginning, their repertoire consisted of dancers who performed their acts with musical accompaniment. Besides entertaining the public, these early shows had the task of pleasing the gods. In 240 BCE, the Greeks introduced the classical concept of drama — full-length scripted plays.

It did not take long for the Romans to master the craft. Several decades later, the Roman playwright, Plautus, was writing his famous comedies. Tragedies also flourished during the second century BCE. Sadly, no early Roman tragedy survives, though it was highly regarded in its day.

No less dramatic, and certainly bloodier, were gladiatorial fights. The deadly spectacle arrived in Rome from southern Italy in 264 BCE and quickly attracted the attention of the masses. The first recorded fight between gladiators was a part of funeral games (munera) in honor of a Roman aristocrat. By the mid-first century BCE, gladiatorial fights were staged at state-sponsored festivals (ludi). The great popularity of these deadly spectacles in ancient Rome led to the construction of the first purpose-built venues —amphitheatres.

The Roman Theatre: Majestic but Hollow

Unlike in the Hellenistic East, where each important city had its own theatre building,  Roman dramas were initially performed in temporary wooden structures. In ancient Rome, the first permanent Roman theatre was the Theatre of Pompey, built in 55 BCE by Pompey the Great. It was an enormous structure, capable of holding 20,000 spectators. At the time of its completion, the Theatre of Pompey was the largest building in Rome. The venue had a double role, acting as an elaborate stage and a victory monument for Pompey’s military campaigns. Ironically, Pompey’s architectural masterpiece would serve as a stage for a real drama — the assassination of his rival Julius Caesar, in 44 BCE.

Pompey’s building marked a new era for Roman theatre. The theatre was now an integral part of the urban landscape. Unlike the classical Greek model, carved from the hillside, the Roman theatre was a freestanding building, allowing for an elaborate external decoration and grandiose look. The larger inner space allowed for two to three-story-tall stage-front (scaenae frons), lavishly decorated with statues of gods and heroes, portraits of the imperial family, and local dignitaries. While the building remained unroofed, the huge awnings protected both the performers and the spectators from the effects of the weather.

Ironically, while the Roman theatre of the imperial era became a large and impressive venue, its repertoire changed significantly. By the first century CE, the composition of both tragedies and comedies declined precipitously. The audience of ancient Rome favored entertainment and performance rather than drama. In short, they demanded spectacle. The Roman theatre stage became a host to large-scale scenes consisting of hundreds of participants: dancers, acrobats, musicians, and actors. Roman plays were not much different from modern-day circus performances! Even wild animals could appear on the stage. The most popular theatrical shows of the imperial period were mime (often with strong sexual connotations) and pantomime (mostly recreations of classical myths).

The crude, down-to-earth entertainment alienated educated elites, who began to despise the theater, criticizing the vulgarity of the performances. The actors, both slaves, but also “free citizens,” were held in low regard, often having the same social status as criminals or prostitutes. Yet, this simplified but sensational sort of entertainment continued to draw a large audience. This fact was recognized by high officials, including the emperor, who continued to bestow lavish sums to the Roman theatre.

While the quality of Roman theatre shows declined, its larger cousin, the amphitheatre, enjoyed its heyday in the imperial period. The earliest arenas were temporary wooden structures. The first known stone amphitheatre in Italy (and the rest of the Roman world) was built at Pompeii, around 80-70 BCE. The Pompeii amphitheatre shares its iconic form with much more grandiose arenas—an elongated oval space in the center, surrounded by tiered seating. The earliest stone amphitheatre in the city of Rome was constructed in 29 BCE, during the reign of Emperor Augustus. Emperor Caligula also attempted to build an arena, but work was abandoned following his death.

The most famous and iconic Roman arena is, of course, the Colosseum. The massive structure, which still stands today, was begun by Emperor Vespasian and was completed under his son and successor Titus in 80 CE. The Colosseum featured elaborate basement facilities, including animal cages and mechanical elevators. The ornate multistoried façade, decorated by statues of gods and heroes, enclosed the sandy battleground, highlighting the importance and grandeur of the venue. The Colosseum could hold an estimated 50,000 to 80,000 spectators, making it the second-largest entertainment venue in the Roman Empire (the first being the Circus Maximus).

The Roman amphitheatre was a multipurpose building dedicated to mass entertainment. Their repertoire varied, encompassing all sorts of violent sports. The most common were gladiatorial fights, where professionally trained athletes competed in hand-to-hand combat in front of a frenzied audience. Contrary to traditional beliefs, the gladiators rarely fought to the death. For every ten gladiators who entered the ring, nine probably lived to fight another day. The best gladiators would gain both glory and wealth, becoming ancient superstars.

Gladiators also competed in the venationes, fights with wild beasts. War captives, condemned criminals, or heretics (including early Christians) were also thrown to the beasts (damnatio ad bestias), in this case with deadly results. The most spectacular (and rarest) form of entertainment was the naumachia—a staged naval battle held on specially built artificial lakes, including flooded amphitheatres. Warships (or entire fleets), crewed by prisoners of war or convicts, would fight until one side was destroyed.

Both the theatre and amphitheatre were an integral part of daily life in ancient Rome but they were more than mere entertainment venues. Throughout the imperial period, they remained an essential route to popular favor for emperors and high officials. The construction and upkeep of these massive buildings was a costly business, especially in the case of the amphitheatre, which required funds from the emperor’s coffers. The same applied to the organization of performances.

Standalone performances presented a considerable drain on the sponsor’s budget. The cost was further magnified during official festivals and on other special occasions when, in one day, audiences could see several different events. Yet, the investment was worth it. The large audience, assembled in one location, had a rare opportunity to engage in direct discussion with authority. The emperor, too, could address his subjects and soothe their tempers by dispensing free food, wine, and gifts. We should not forget that theatre shows and games in the amphitheatre were free of charge. Thus, through sponsorship, one could enhance his power and prestige while diverting the people’s attention from everyday problems.

Entertainment venues were a place where one could see the glory and power of Rome on display. These massive structures were often funded with the spoils of war, starting with the famed Theatre of Pompey. This edifice was more than a theatre building. It was a lavish complex that included the curia, a large park area, and a temple to Venus Victrix (or simply, Victory). The complex was also decorated with a relief showing Pompey’s military victories.

Similarly, the funds for the Colosseum came from the spoils of the First Jewish War. Thus, these already impressive buildings would remind visitors and passersby of Roman military triumphs and the achievements of their founders. The same was true of performances. One of the most expensive regular forms of entertainment was the venationes. Wild beasts were difficult and costly to procure and hence served to advertise the wealth and generosity of the sponsor. The theatre stage too could be used for the display of a menagerie. Thus, the large variety of exotic animals on display demonstrated the vast reach of Roman dominion.

The End of the Roman Theatre and Amphitheatre

Changes in the Empire’s socio-political and cultural makeup spelled the end for the Roman theatre and amphitheatre. The weakening of the imperial economy, philosophical disapproval, and strong opposition from increasingly predominant Christianity led to decreased interest and gradual abandonment of lavish shows and games. Already in 325 CE, Emperor Constantine the Great prohibited gladiatorial combat. The law, however, was never implemented in practice. A new blow came in 393 when Emperor Theodosius I banned all pagan festivals, of which the performances were an important part. Finally, on January 1st 404, the last gladiatorial combat in Rome took place. The venationes lasted until the sixth century, while chariot races remained a favorite pastime in the Roman East until their end in the mid-seventh century.

While the era of the Colosseum came to an end, theatrical shows survived into the medieval period, albeit on a smaller scale. The collapse of the Western Roman Empire and changing public lifestyles left the massive structures to fall into disrepair. Nevertheless, artists continued to entertain the public, in town squares or marketplaces, despite the Church’s attempts to prohibit (often vulgar) performances. Performed by jesters, jongleurs, bands, and acrobats, mime survived until the present day, representing an unbroken dramatic tradition from ancient Rome.

During the Middle Ages, both theatres and amphitheatres fell out of use, becoming places for executions, occasional church plays, or housing, with numerous dwellings built on their grounds. Some venues were turned into medieval fortresses. However, in an age when quality materials were difficult to obtain, these former “houses of entertainment” were often used as stone quarries. They were partly (or entirely) dismantled to provide material for new buildings, including churches, palaces, and defensive ramparts. Yet, surviving Roman theatres and amphitheatres are still impressive sights. The arena, in particular, remains the most recognizable Roman icon. Aside from the Colosseum, El Djem, Verona, Arles, Pula, and Nimes represent just a few of the majestic monuments that still stand as witnesses to the power and glory of the once-mighty Empire.