Sam Gilliam is an abstract, American painter. Since the 1960s, all the way through to the present day, he has continued to innovate and redefine his artistic practice. 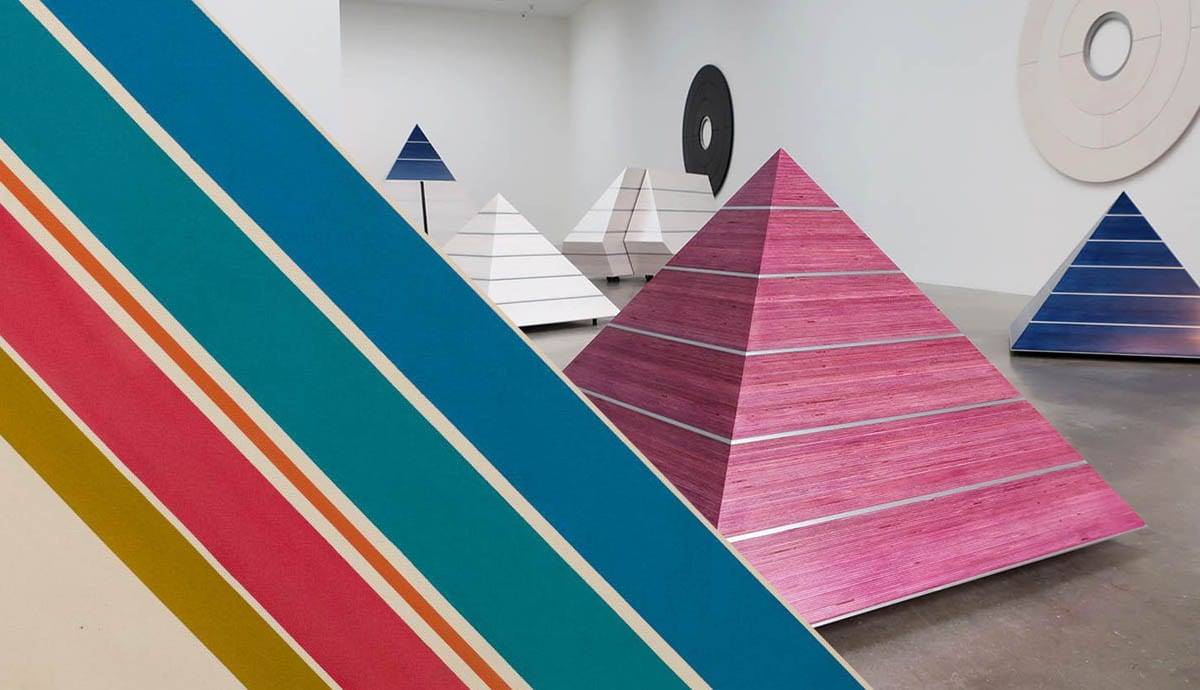 Sam Gilliam is a contemporary, American painter, active since the mid-20th century. He has dismantled and reconstituted his artistic practice numerous times. From his early hard-edged abstraction, to his iconic drape paintings, collages, and his recent sculptural work, he has remained a ceaseless experimenter. Gilliam crosses mediums and genres, including color field painting; he ventures between and in between them, but unites all of his work with a fundamental spirit of painterliness.

Sam Gilliam first gained notoriety for his hard-edged, abstract paintings, one of which was included in the landmark 1964 exhibit “Post-Painterly Abstraction.” This show was curated by the influential art critic Clement Greenberg for the Los Angeles County Museum of Art to highlight the stylistic tendencies of a new generation of painters, including Gilliam, who Greenberg observed were moving “towards a physical openness of the design, or towards linear clarity, or towards both[…]They have a tendency, many of them, to stress contrasts of pure hue rather than contrasts of light and dark. For the sake of these, as well as in the interests of optical clarity, they shun thick paint and tactile effects.”

Greenberg argued that this was a reaction against/an inevitable evolution of “Painterly Abstraction,” characterized by a “flurry of strokes, blotches, and trickles of paint[…]The stroke left by a loaded brush or knife” and “interweaving of light and dark gradations,” which was exhibited by artists like Hans Hoffmann and Jackson Pollock. This “Painterly Abstraction” had exploded in popularity since the 1940s, resulting in the formalization of the style and its subsequent reduction to a set of mannerisms. Certainly, Gilliam’s work from this early stage of his career confirms Greenberg’s thesis; clean, even, flat, parallel stripes of color, run diagonally across these canvases. Gilliam’s later work, however, somewhat complicates his place in this dichotomy of abstract painting.

Greenberg’s show observed that painters were moving away from authorial, Painterly flourishes, towards more anonymous seeming applications of paint, without the same violent expressiveness that was so definitional of American abstract painting in the 40s and 50s. In 1965, Sam Gilliam would disrupt this aesthetic trend with his “Drape Paintings.”

These paintings, made on canvas, were presented unstretched and draped from the wall, allowing the fabric to hang, twist, and fold over itself. In these works, the thin application of pure colors remains (emblematic of Color Field painting), but Gilliam combines sheds geometric clarity for a messy, Action Painting style, with blurred colors and splatters of paint. In removing his canvases from the stretcher, Gilliam further emphasized the bodily, human, and expressive nature of painting. In this sense, he revitalized Painterly concerns, without merely restating them, or adopting them as a set of mannerisms. Gilliam found a path, not by retreating into the past, but by uncovering a new manner of painterliness, drawn from a moment dominated by deeply unpainterly work: both Greenberg’s new form of abstraction and the arrival of Pop Art seemed to signal the end of painterliness.

These innovative draped paintings remain Sam Gilliam’s most recognized series. The power of Gilliam’s gesture was that in bringing forth the innate sculptural potential of painting, which is typically obscured by the convention of the flat, stretched canvas, often distracting from the real dimensionality of the materials, focusing instead on the illusionistic space created by color and tone relationships.

Despite the success of these draped paintings, Sam Gilliam was not content to stagnate. Starting in 1975, a decade after first taking his canvases off the stretcher, Sam Gilliam concerned himself, instead, with a series of collaged works. By 1977 these had evolved into a formidable body of work, collectively entitled “Black Paintings.”

In these “Black Paintings,” Sam Gilliam once again involves geometric motifs. However, they are superimposed over a dense ensemble of bright colors and dark black paint. Inside of the pictures, line segments, circles, and rectangles cut across the scumbled dunes of black acrylic paint through which splotches of color show. Notably, this series sees Gilliam applying paint thickly and indefinitely, once again recalling works of Action Painting. In a sense, these pieces merge the inclinations of his last two major series into something entirely new. The impersonal geometry of his hard-edge paintings meets with the charged freeness of his “Drape paintings.”

These collages are also connected to the “Drape Paintings” in the sense that Gilliam is, once again, recontextualizing canvas painting by using it as college material, attaching pieces of painted canvas to each other, emphasizing the mutability of this form. Much like the late works of Helen Frankenthaler, Gilliam’s collages blend the visual languages of Action Painting and Color Field Painting.

By the early ’80s, Sam Gilliam had begun to use hard-edged, irregular supports for his canvases. These later “Black Paintings” are often composed of multiple, differently shaped canvases across and between which geometric forms stretch over the same, thick, grounds of paint, alternately dark and bright. Through the 1990s and 2000s as well, collage has remained important to Gilliam’s artistic practice. The more recent collages have become much more visually complex and busy, in terms of their color and overlapping patterns. Gilliam has noted the influence of quilting on these later works. With these collages, Gilliam is connecting painting, a formerly self-obsessed medium, with other artistic traditions, escaping the inevitability of an inexpressive style by recontextualizing Painterly flourishes.

The Political and the Painterly

As an African-American artist, coming to prominence during the Civil Rights Movement, Sam Gilliam faced criticism from figures within the Black Arts Movement of the 60s and 70s for his participation in abstract art. Abstraction, Gilliam’s critics felt, was politically inert and unable to address the real and urgent concerns of Black Americans. Many argued, as well, that abstraction, as it then existed in America, belonged to a Eurocentric tradition of art that was hostile towards and exclusionary of non-white artists. This criticism of Gilliam was issued despite his personal involvement in the Civil Rights Movement. He had, at one time, served in a leadership role for his chapter of the NAACP and participated in the March on Washington.

Sam Gilliam has maintained the efficacy of abstract painting as a tool for social change. In a recent interview with the Louisiana Museum of Modern Art, Gilliam asserted:

“[Abstract art] messes with you. It convinces you that what you think isn’t all. It challenges you to understand something that is different […] a person can be just as good in difference […] I mean if that’s your tradition, what you call figures, you don’t understand art anyway. Just because it looks like something that resembles you doesn’t mean that you have understanding. Why not open up?”

Contentious as it was at the time, the relationship of Sam Gilliam and other Black, abstract artists to the Black Arts Movement has been re-evaluated in recent years by artists and historians alike. More credence has been given to the connection between improvisational abstraction and traditionally black art forms like Jazz and Blues, music which Gilliam has explicitly cited as an influence and which places him more in line with ideas about Black aesthetics which emerged during the Civil Rights era.

The same beauty of improvisation is on show in the form of the intuitive, splattering of Gilliam’s draped canvases, or the patterns formed by the folding of paper in his watercolors. In the collages, as well, parallels to improvisational music emerge: Jumping between different moments, thoughts, and notes, unified by the compositional structure of a song or canvas.

Furthermore, Sam Gilliam’s work, abstract as it may be, has always forayed into political events and ideas. Take, for example, the painting April 4th, the title of which references the date of Martin Luther King Jr.’s assassination. In his review of a show featuring this piece, art historian Levi Prombaum argues:  “Gilliam’s references to blood and bruising encourage a reading of these canvas as forensic evidence. As the allusions to King’s sacrificial body double as the index of the painter’s body, Gilliam pressures what it means for the expressionistic canvas to index a movement.” The contemporary Black artist Rashid Johnson concurs regarding the political relevance of Gilliam:  “I…think of Gilliam more often for his strength of character and his use of color as an activist tool.”

The negation of authorial flourishes was key to the notion of Post-Painterly Abstraction, as it was understood in the 60s. Perhaps Sam Gilliam’s proximity to such theories made it difficult to perceive how his own person and the external politics of his identity related to his work at the time. Retrospectively, however, this aspect of his work is apparent. Additionally, it serves as a further example that Gilliam’s vision of painterliness extends beyond Greenberg’s. The acceptance of a visible, authorial role, as well as the structural and procedural influence of improvisational music, are means by which Gilliam has kept alive a spirit of painterliness in his work.

Most recently, Sam Gilliam has added to his repertoire a group of new, sculptural works. Just this past November, Gilliam’s latest show, “Existed, Existing” featured a group of geometric sculptures, predominantly circles, and pyramids, constructed of wood and metal. These works appear unprecedented for Gilliam in his recent years. Their monochromatic and formal purity defies the expressiveness of his work in recent decades.

These sculptures recall, more than anything, the spirit of his hard-edged abstractions from the early 60s. In painting terms, they certainly have more to do with the Greenberg sort of Post-Painterly, Color Field painting than anything else. Of course, Gilliam is no stranger to that style, but even his hardest-edged paintings bore signs that they were hand-made. Not so with these sculptures. Once again, Gilliam reveals himself to be undefinable in such strict terms.

These sculptures are complemented by two new suites of paintings. Firstly, the sensibility of the Color Field painting returns in a group of large-scale, monochromatic watercolors. These share a sort of resolute calm with the sculptures.

That calm, however, is disrupted by the second series of paintings, works like The Mississippi “Shake Rag,” which show that Sam Gilliam is still interested in Painterly expression. Despite his unstretching of canvases, or his reshaping and collaging them, he is able to make vital work on a single, rectangular, stretched canvas. All of Gilliam’s experimentation, in the presence of this new work, is reaffirmed as his dedication to painting and painterliness in both their most radical and traditional forms. Each practice that Gilliam dabbles in seems to persist, in some way, throughout his career, weaving into a broad, but cohesive vision of painting.