HomeArtistsThe Marvel That Was Michelangelo

Born Michelangelo di Lodovico Buonarroti Simoni in 1475 in the town of Caprese, just outside of Florence, Michelangelo experienced an upbringing both marred by sadness but also fortuitous in its fortune. 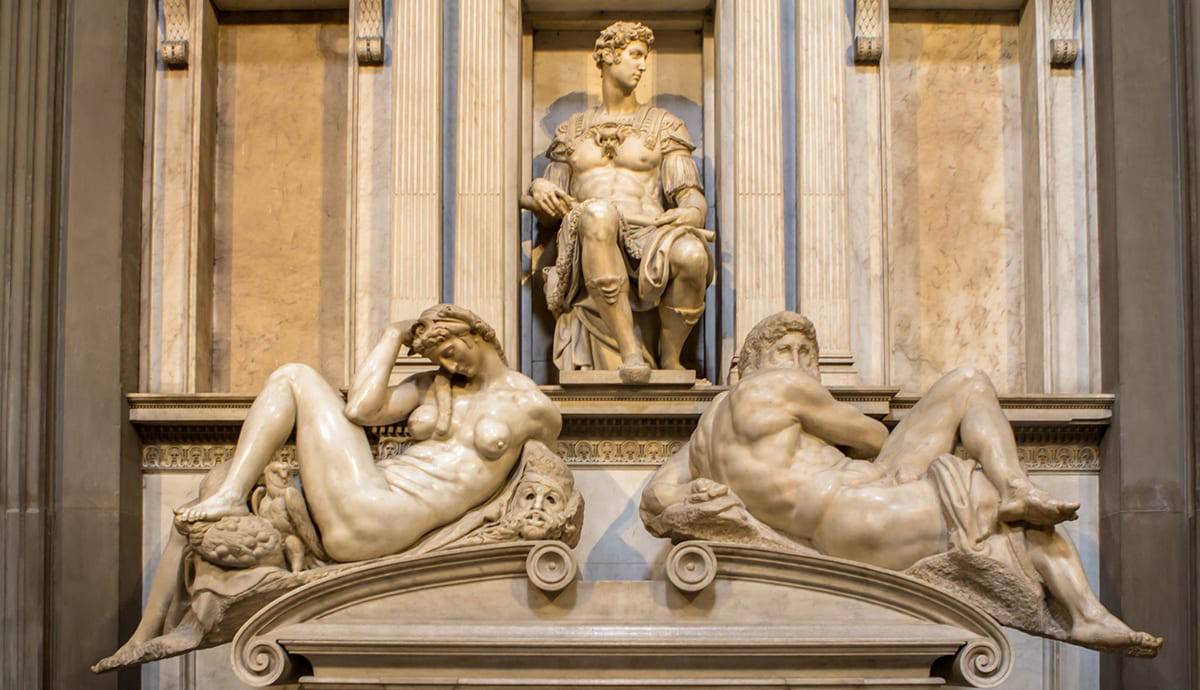 The death of Michelangelo’s mother in 1481 shook the young boy and resulted in his relocation to live with a nanny in the hills of Settignano. This move proved auspicious, however, for the young talent’s development. The nanny’s in-laws owned a nearby quarry, which afforded Michelangelo the opportunity to learn directly from the material that would bring him some of his most significant future artistic successes.

When two moderately-sized bronzes appeared on the world art stage in 2015, they caused quite a stir. To be sure, they were unusual in that they each depicted a powerfully muscular man astride a snarling panther.

It was not the subject, though, that caused the frenzy; it was the artist to whom these works were attributed. That was because the artist who purportedly created this pair was none other than Michelangelo, one of the artists most synonymous with Italian Renaissance art.

The 1480s witnessed Michelangelo’s formative training within the studio of the famed Florentine painter Domenico Ghirlandaio (1449-1494) as well as some of his earliest commissions both there and in Bologna. It was his introduction into the circle of patrons in Rome in the later years of the 1490s, though, that ushered in Michelangelo’s rapid rise to acclaim.

During this initial stay in the city, he would undertake a commission from Cardinal Bilhères-Lagraulas that would become known as his first – and most famous – Pietà (1497), which was even recognized by contemporary commentators for its revolutionary qualities.

It was during this turn of the century moment that Michelangelo continued to hone his abilities as a draftsman, a quality for which he is still revered today. A keen student of physiognomy and proportion, Michelangelo was further fueled in cities like Rome to achieve figural perfection thanks to the wealth of ancient sculptures that could be sourced for study.

This dedication to meticulous perfection is documented in the myriad drawings that still exist from his hand, but it also led others to criticize his overly muscular figures (Leonardo da Vinci, presumably speaking of Michelangelo, once derided such figures by likening this musculature to a “sack of walnuts”).

Regardless of attempts to discount his abilities, by the dawn of the sixteenth century, Michelangelo was one of the most acclaimed artists of his generation. Moving between the main city centers of Rome and Florence for more than half a century, Michelangelo worked at a feverish pace to complete an incredible amount of work.

From his unmistakable David for the Palazzo della Signoria in Florence (1501-1504) to the mass of figures assembled in the remarkably complex Sistine Chapel frescoes (ceiling, 1508-1512; Last Judgment altar wall, 1535-1537), Michelangelo revealed his true status as Renaissance man for his ability and his versatility in expressing those talents across media, even into the realm of architecture (which included, among many other projects, his contributions to St. Peter’s Basilica).

By the time of his death in 1564, at the age of 90, Michelangelo was not only one of the oldest living artists but had also witnessed dramatic shifts in art over the course of his enduring lifetime. He can be credited with first toying with some of those transitions – which eventually became associated with the term “Mannerist” – and thus can be seen as representing a truly timeless figure.

Though his art was so heavily influenced by that of the past, he was at the same time always looking forward to the ways in which the field was evolving. That is not to say that he foresaw the future. Rather, it is to merely note that his incredible skills as an artist were also paired with a keen awareness of how his art fit within the larger landscape of his cultural moment.

Michelangelo’s major masterworks of sculpture, painting, and drawing are housed within prominent museums for public viewing. Nevertheless, there are occasions – however rare – when a drawing by Michelangelo makes it to the auction market.

When such work comes up for sale, the bidding is often fierce and the hammer price astronomical. For example, a preparatory study for Michelangelo’s Risen Christ (Santa Maria Sopra Minerva, 1521) appeared at a July 2000 Christie’s London auction and raked in more than £8 million (over $12.3 million).

Such high prices are owed in part to the fact that documented examples of Michelangelo’s work so rarely appear for sale. The last major drawing by the artist to appear at auction was a study of a male nude that was sold at Christie’s London in 2011 for more than £3 million ($5 million).

Much of what appears at auction associated with Michelangelo are smaller-scale replicas after the master’s most iconic works.

10 Things To Know About Domenico Ghirlandaio

By Alexis CulottaPhD Art HistoryAlexis holds a PhD in Art History from University of Washington. She is an experienced lecturer, skilled in Art Research and Art History.

10 Things To Know About Domenico Ghirlandaio