After a long succession of treaties desperate for peace, the Munich Agreement was the breaking point. What was hoped to end European tension actually became the catalyst for war. 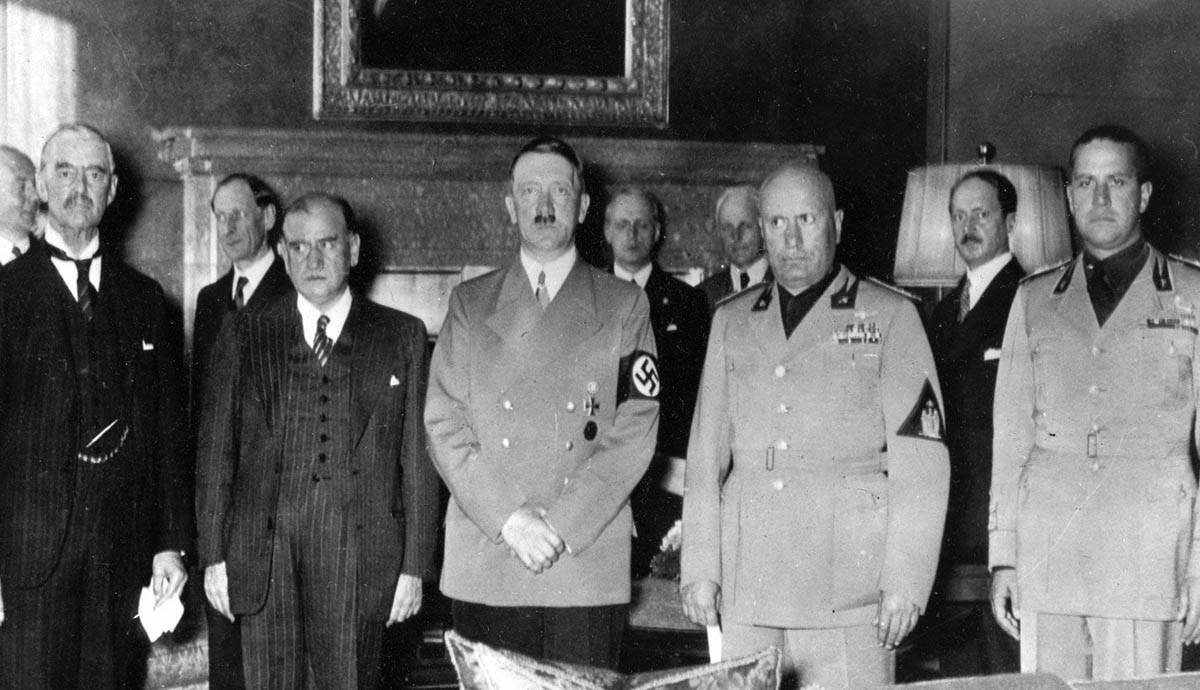 The Munich Agreement was a treaty written and signed in 1938 by Neville Chamberlain of Great Britain, Adolf Hitler of Germany, Edouard Daladier of France, and Benito Mussolini of Italy. Chamberlain proposed both the conference and the treaty in an attempt to put an end to the advancements of Adolf Hitler and prevent all-out war.

Historians generally agree that World War II started in 1939 when Germany invaded Poland and set off chain reactions within alliances and agreements all set to protect Poland from Hitler. But the actual beginning of the war should be 1938 with the Munich Agreement and its inability to prevent armed conflict. The Munich Agreement had the strength and the backing to put a stop to it all, but due to its weak and poorly-executed predecessors, it all but guaranteed that conflict would continue and develop into what we now know as World War II.

Treaty of Versailles: The First Step Toward Failure at Munich

The many attempts that led up to the Munich Agreement set a very rocky precedent. There were so many failures along the way that the Munich Agreement did not have much of a chance for success. The first attempt was the Treaty of Versailles, the peaceful solution to World War I. Allied leaders President Woodrow Wilson from the United States, David Lloyd George of Great Britain, and Gorges Clemenceau of France drafted and then signed the treaty along with Hermann Muller of Germany.

From the Allied perspective, the Treaty of Versailles was intended to put a peaceful end to all the post-World War I tension by requiring Germany to accept guilt for the war, reorganize and return territories and colonies seized by Germany during the war, severely limit Germany’s military, and enforce hefty economic reparations. In reality, this treaty was a desperate solution that was not implemented productively or fairly due to revenge-seeking leaders assigning idealistic responsibilities and unfair punishments to Germany. Each country had debts to pay, and in everyone’s failing economies, that simply was not going to work. Punishing Germany so severely was a punishment, in many ways, for all.

One of the biggest examples of this was Germany’s restrictions on rearmament. Germany was allowed the very basics in terms of infantry, ammunition, supplies, an nd border control, but nothing else. This was obviously frustrating for Germany and quickly violated this portion of the agreement.

The violations of the Treaty only worsened as time went on. Germany began down a slippery slope of rebellion to their imposed limits as they quietly grew their military, occupied the demilitarized Rhineland, then Austria, and finally Czechoslovakia. These all were expressly prohibited within the Treaty of Versailles. Each time, Hitler clearly demonstrated his dismissal of the treaty, and each time was answered with another treaty that would inevitably be broken.

The League of Nations & the Kellogg-Briand Pact

This all fell apart as the United States eventually refused to ratify the Treaty of Versailles nor join the League of Nations. This left France and Britain to enforce the treaty with little other backing. Germany was prohibited from joining initially, which left them resentful and defiant towards the treaty, but was eventually granted membership with the Locarno Pact.

The League of Nations was supposed to be another defense against further war, but in the end, it contributed to the instability in Europe. When Hitler took power in 1933, he was following suit with the fluidity that had already been happening in Europe.

Frustrations and disappointments surrounding the League of Nations resulted in the Kellogg-Briand Pact. This pact was proposed by Frank Kellogg of the United States as well as Aristide Briand of France. Their combined proposal aimed at creating a peaceful alliance between world powers that the League of Nations could not. Kellogg-Briand Pact succeeded in terms of bringing the world together as almost every nation signed. The Pact specifically called upon countries to settle disagreements peaceably and renounce war in general. This worked well until Hitler kept moving and more alliances came into play.

Leading up to 1938, Hitler had gained power in Germany and was making his presence known across Europe. He had rebelled against the limits and sanctions placed on Germany under the Treaty of Versailles and sought to expand Germany’s borders to further unite the German people. The Munich Agreement came after the invasion and occupation of both the Rhineland and Austria. The leaders in Europe had decided to cede parts of Czechoslovakia to Hitler, and in return, Hitler would end his conquest for unification. Unfortunately, this pact completely imploded due to a pattern of appeasement that not only enabled Hitler to occupy the entirety of Czechoslovakia but bolstered him further into taking over a continent.

To understand why this agreement should actually be considered the beginning of World War II, we have to understand in what context the Munich Agreement was written, the different parties involved, what the agreement says, and what it was intended to do.

Context For the Munich Agreement

In the years following World War I, many attempts were made to blame, divvy out punishment, and enforce reparations to eventually bring peace to Europe. These treaties and agreements were all made with good intentions but far too riddled with unrealistic expectations, contradictions, and self-interest on all sides. The Treaty of Versailles was the first, followed quickly by the Locarno Treaties, agreements made in the League of Nations, and the Kellogg-Briand Pact. Each had a few strong points, but all eventually failed and carried those failures through to the Munich Agreement.

Throughout these years, Hitler was gaining a reputation as one who would not follow prior agreements and would rather ask for forgiveness than permission. His deep desire to unite the true German people pushed him to expand Germany and overtake the surrounding areas. The other nations within Europe were desperately working towards peace without recourse to violence.

This commitment to non-violence weakened the ability of anyone to stop Hitler. Written treaties and agreements became the only options for slowing Hitler’s momentum or enacting any form of punishment. But due to his blatant disregard of any type of authority, these agreements became void under the force of his military.

The Rhineland was one of the first non-violent buffers put in place to undermine any possible German aggression. The system of treaties and alliances ironically backfired as Hitler invaded the Rhineland in response to feeling threatened by the Franco-Soviet Treaty of Alliance and Mutual Aid. This first invasion began the pattern of violent reactions from Germany to agreements for peace throughout Europe.

The militarization of the Rhineland quickly led to Hitler gaining complete control of the area. Hitler then took a step further by invading Austria. This invasion was widely overlooked as many other powers in Europe were committed to appeasement, focusing on foreign policy and negotiations to prevent another country from going to war. Due to this appeasement and the absence of any physical force against him, Hitler was able to annex Austria quickly. This evolved into a desire to unite the borders of Czechoslovakia to Germany as well.

The actual words of the Munich Agreement lay out how the Sudetenland will be occupied through dates and maps. It specifies the timeline that Germany will move in, and the Czechoslovak government will, in essence, move out. It is important to note that the Munich Agreement did not give Hitler the entire country, only the borders. (Spoiler, he takes the whole thing later anyway.)

This entire era before World War II is sometimes referred to as a period of appeasement, or basically preventing war through negotiations, treaties, agreements, and policies without leading to violence. World War I had left the world, and specifically Europe, in such bad shape that all effort was put into peaceably preventing another war. Thus, the Munich Agreement was written to appease Hitler once more in hopes of ending his violence. This was hoped to be the final straw as Hitler himself had agreed to back down and be satisfied after this.

If we put ourselves in 1938, this agreement could be considered a great step towards peace. Appeasement could have worked, the Munich Agreement could have stopped him, and World War II would have been non-existent. No one knew exactly what Hitler was capable of, what he was hoping to accomplish, and the devastating war that was to come. The Munich Agreement was meant to bring “peace for our time,” as heralded by one of its signers, Neville Chamberlain. It was set to finally wrap up all tensions and “assure the peace of Europe.”

The beginning of World War II is generally known to be the invasion of Poland in 1939. This was when Hitler had ignored yet another treaty, and his actions were finally met with the physical force of the other European countries. This fails to recognize the pattern that Hitler had established to get to this point. Hitler had not started with Poland, nor did he begin by invading an entire country.

World War II began when Hitler was appeased again with the Munich Agreement. Germany had continually violated the Treaty of Versailles and was appeased. More treaties were written to contain Hitler, such as the Locarno Treaty and the Kellogg-Briand Pact, but were all violated quickly. Due to the unenforceable policy of peaceful appeasement, the League of Nations could not do much to ensure compliance to the previous treaties, nor reprimand Hitler for his current actions without leading to a war that they were fighting to prevent.

The Munich Agreement was a shift in momentum and a boost in confidence for Hitler as his demands were met once more. This agreement was supposed to end the aggression that Germany was showing. It was meant to be a peaceful agreement but enabled Hitler to continue showing force and have his demands met. The Munich Agreement had the opportunity to stop the war and failed due to its weak predecessors and the strong pattern of appeasement towards Hitler that had already been established. 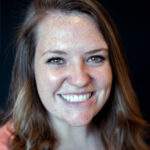 By Shelby ChadburnBA History TeachingShelby is a former high school US Government and World History teacher. She has a passion for research and all things history. She can be found cooking, playing games, and spending time with her husband and two daughters.

We’re All Keynesians Now: The Economic Effects of the Great Depression