The Golden Age of British Watercolour lasted from 1790-1910. Artists used the medium to create luminous and ethereal landscapes in reaction

The Golden Age of British Watercolour lasted from 1790-1910. Artists used the medium to create luminous and ethereal landscapes in reaction to industrialization. It rapidly became popular, earning admirers across the globe. Below, we’ll look at some of the top drawings and watercolours that sold in the last decade. 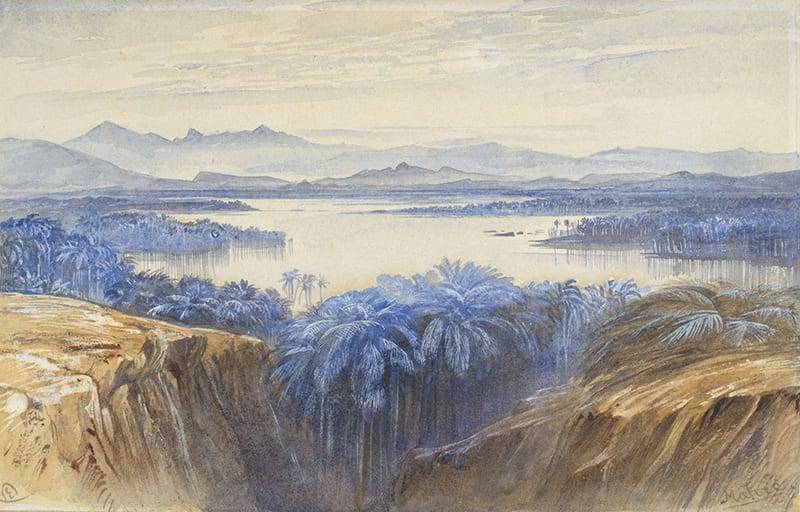 Lear is best known for his comedic poems such as The Owl and the Pussycat. It’s lesser known that he was also a talented watercolour artist. In 1846, Queen Victoria of England hired him to be her art teacher. His collection of Indian drawings would come much later in the 1870s. The above example has only been on exhibition twice; once in London in 1988, and once in San Remo in 1997.

Three head studies of birds: A Guinea Fowl; A Smew; and A Red-breasted Merganser (circa 1810-20s), by Joseph Mallord William Turner, R.A.

Turner created these drawings for his most important patron, Walter Fawkes of Farnley Hall, Member of Parliament. Famed English art critic John Ruskin desired to acquire this piece, regarding it as the most “inimitable” of Turner’s oeuvre. It remains difficult to view; its only recorded public exhibition was in 1988 at Tate, London.

The Valley of the Brook at Kidron, Jerusalem (circa 1830s), by Joseph Mallord William Turner, R.A.

Turner created this piece for the book, Landscape Illustrations to the Bible (1833-1836). Ruskin also admired this watercolour, declaring it one of his “unrivalled examples of his richest executive powers on a small scale.” The last time it was exhibited was in 1979 at the Israel Museum in Jerusalem. Out of the twenty-six pieces Turner executed for this project, this sample is in notably excellent condition.

The above drawing has a celebrated creator, subject, and provenance. Rosetti, one of the founders of the Pre-Raphaelite movement, drew this headshot of the beautiful muse Maria Stillman. Stillman was a gifted artist herself, and some argue that she was the best female Pre-Raphaelite painter. The last person to own this study was L.S. Lowry, the modern English artist famous for his depictions of industrial life.

This is one of two drawings that Constable executed of the private park, Helmingham Dell. It would form the basis for four oil paintings twenty years later. Yet the first to own the drawing study was likely C.R. Leslie, Constable’s first biographer. It was last sold from the collection of Valerie Eliot, wife of writer and Nobel Prize winner T.S. Eliot.

The Destruction of Pharaoh’s Host (1836), by John Martin

This piece epitomizes Martin’s dramatic style, which showed that watercolour could have as much depth and intensity as oil paintings. Its first owner was George Gorder, the Chairman of the UK’s leading newspaper company from the 1940s-70s. Its realized price topples its £107,800 sale in 1991, which made it the most expensive Martin watercolour sold at the time.

This painting is one of Turner’s largest and most beautiful portrayals of the Margate seafront available for private sale. The first to acquire it was Benjamin Godfrey Windus, whose full Turner collection compares to that of museums.

In 1979, it was mysteriously stolen and purchased by the unwarned Yale Center for British Art. Since then, it has been returned to its rightful owners, and exhibited across locations in London and New York.

Study Of A Lady, Possibly For The Richmond Water-Walk (circa 1785), by Thomas Gainsborough, R.A.

This drawing is one of a five-part series in which Gainsborough drew fashionable women in rural settings. Its remarkable price is due to the fact that it’s the only one available for sale.

The other four drawings are held by public institutions, including the British and Getty Museums. In 1971, Edward Speelman, the English Lieutenant responsible for arresting the Reich Commissioner for the Netherlands, acquired it before its latest sale.

The Lake Of Lucerne From Brunnen (1842), by Joseph Mallord William Turner, R.A.

This is Turner’s only depiction of the Lake of Lucerne that is not on view at the Tate museum. It’s one of twenty-five landscapes that he did during his travels in Switzerland towards the end of his life. However, only five of the pieces are in private hands.

Several historical persons of interest have acquired this piece before. One of them was Sir Donald Currie, a Scottish shipowner who dominated the international shipping industry for half a century.

The Lake Of Albano And Castel Gandolfo (circa 1780s), by John Robert Cozens

This is not only the greatest watercolour of Cozens’ career, but also of the 18th century. It depicts Lake Albano, a frequent theme in Cozens’ work, from its highest perspective. The piece has been owned by great English artists like portrait painter Sir Thomas Lawrence and famed watercolour artist Thomas Girtin.

Its current owner is unknown, but the UK government placed an export bar on it in 2018. The nation hopes to find the new owner in order to acquire and protect it as a cultural treasure of British history.