Who Were the Viennese Secessionists? 6 Key Artists

The Viennese Secession overthrew tradition for a new age of radical modernity. These are 6 of the artists who defined the style. 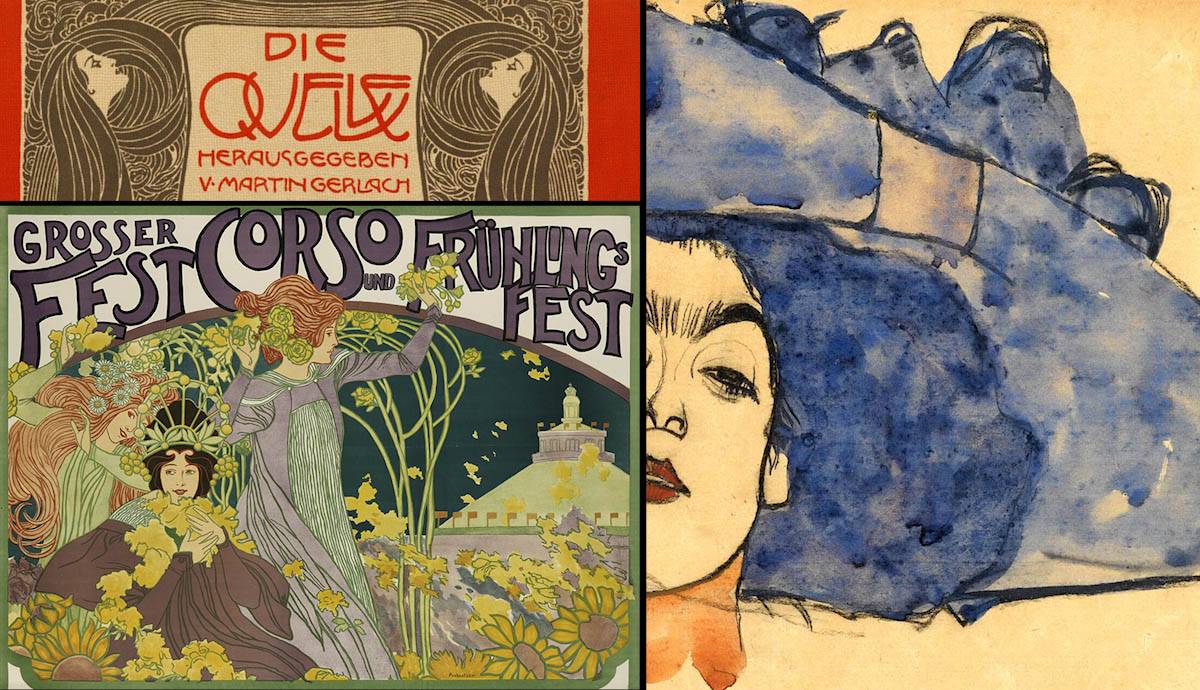 The Viennese Secession was a rebellious band of artists, designers, and thinkers who charged through turn-of-the-century Vienna with the booming voice of modernity. Breaking away from Vienna’s traditional past, they ushered in a new era with the bold, striking languages of Post-Impressionism, Japonisme, and Art Nouveau. Even more outrageous was their dissolution of the boundaries between fine and applied arts, allowing the realms of architecture, illustration, typography, and painting to seamlessly blend into one another and sit harmoniously side-by-side. This generous egalitarian attitude redefined art’s relationship to society, helping to bring it down from its pedestal and out into the streets of ordinary life. Art critic of the era Ludwig Hevesi observed the momentous changes this art movement would bring about, noting: “The art city of Vienna, this gigantic small town, will now finally become a Big-Vienna, a true New-Vienna.”

A Brief History Of The Viennese Secession Art Movement

The Viennese Secession was founded in 1897 as a reaction against the Viennese Artists’ Society, which was still steeped in the traditions of the past. This breakaway “secession” was a band of radical forward-looking artists led by the painter Gustav Klimt, along with other members including artists Josef Engelhart, Carl Moll, Koloman Moser, and Alfred Roller, as well as architects such as Josef Hoffmann, Otto Wagner, and Josef Maria Olbrich. Together they were strongly influenced by avant-garde styles from Paris and Berlin, including Post-Impressionism, Japonisme, and Art Nouveau, working with flat bold color, graphic prints, intricate ornamentation, and sinuously flowing lines. Wagner claimed the ambition of the Viennese Secession was to “show the modern man his true face.”

One of the group’s most radical breakthroughs was its approach to exhibition design. The Viennese Secessionists adopted the German concept of the Gesamtkunstwerk, or “total work of art,” where objects made by individual artists came together into a unified, collective whole. They also broke down barriers between fine and applied arts by displaying artworks and utilitarian objects side-by-side. In 1898, the architect Josef Maria Olbrich designed The Wiener Secessionsgebäude (Vienna Secession Building), a purpose-built pavilion, to house the group’s monumental exhibitions. In the eight years that followed, the group held 23 exhibitions in Olbrich’s Secession Building. Perhaps the most famous was the Beethoven Exhibition in 1902, dedicated to the great composer Ludwig van Beethoven. At the center of the display was Klimt’s now world-renowned Beethoven Frieze, which paid tribute to Beethoven’s Ninth Symphony with a complex narrative sequence in the Art Nouveau style.

The Viennese Secessionists’ monthly journal Ver Sacrum (Sacred Spring) was another ground-breaking platform filled with experimental graphics, illustration, printmaking, typography, and literature related to the art movement. The first cover of the journal, published in 1889, aptly summarised the group’s aims – featuring a young tree blossoming out of a wooden vessel into the sky overhead, the image was a potent metaphor for the artists themselves, bursting out of the constraints of the past into a bright new future. Let’s take a closer look at the creative visionaries who founded this incredible, ground-breaking art movement of the 20th century.

Gustav Klimt was the undisputed founder of the Viennese Secession; not only was he the group’s first elected president, but he also led the way with his radical visual art, blending striking Art Nouveau ornamentation with the flat, graphic patterns and flowing lines of Japanese art. Klimt adored women throughout his long and prolific career, and his paintings were defined by powerful, enigmatic femme-fatales taken from history, mythology, and real life. His famous portrayal of Judith I, 1901, conveys the Biblical character drenched in indulgent layers of gold, with her head tilted back in seductive, triumphant defiance.

2. Carl Moll: An Influential Leader in the Viennese Secession

Like Klimt, Austrian artist Carl Moll was an influential leader within the Viennese Secession art movement, and he became the group’s president in 1901. He cycled through a variety of different styles throughout his career, working with graphic art, printmaking, illustration, and painting. However, much of his practice was defined by subdued colors and a quietly muted atmosphere influenced by the meditative tranquillity of Johannes Vermeer and the diffused, dappled light of Pointillism. The enigmatic print Schonbrun, made around 1910, encapsulates this spiritual, contemplative, and ever-so-slightly eerie quality with soft shadows, naturalistic tones, and still, reflective water.

Austrian artist Koloman Moser made a long-lasting contribution to the Viennese Secession, working across an impressively wide range of media including graphic design, stained-glass windows, ceramics, jewelry, and furniture – he even designed a suite of postage stamps. Moser was particularly instrumental in the design of the Ver Sacrum journal’s front covers, creating striking Art Nouveau graphics with loosely flowing, sensuous lines and a distinctively stylized form of typography that is now synonymous with the Viennese Secession’s house style. Along with the architect and designer Josef Hoffman, Moser founded the pioneering Wiener Werkstätte in 1903, a cooperative of Secession artisans working in ceramics, fashion, silver, furniture, and the graphic arts. Such was the radicalism of the Wiener Werkstätte group that they are now credited with shaping the development of the German Bauhaus School in 1919.

Leading Austrian painter Josef Engelhart played an instrumental role in the Viennese Secession art movement – along with Klimt and Moll, he was one of the group’s founding members and took on the position of group president on two occasions, from 1899-1900 and 1910-11. Like many members of the group, Engelhart experimented with a range of different techniques and styles, including painting, illustration, and sculpture. As a result, his subjects were incredibly varied, including historical and literary figures as well as society and celebrity portraits. One of his most famous artworks was a frieze for the World Art Fair of St Louis in 1904, depicting a series of historical figures in a flat, decorative Art Deco style with intersecting lines, patterns, and colors.

Josef Maria Auchentaller was an incredibly prolific and highly respected member of the Viennese Secession, producing a treasure trove of over 400 paintings, drawings, illustrations, posters, and designs for textiles and jewelry. Working across such a wide range of media allowed Auchentaller to break down the barriers between fine and decorative arts, proving just how unified the two genres could be. Auchentaller’s striking Art Nouveau graphics are among the most memorable elements of his career, blending the flowing, feminine sensuality of Art Nouveau pattern with playful typography and the floral motifs of Japanese art, as seen in the stunning poster for Grosser Fest Corso und Fruhlingsfest, (The Grand Fruhlingfest Festival), 1899. Such was the arresting power of his work that the group once dedicated an entire issue of Ver Sacrum to his prints.

Painter, etcher, and lithographer, Austrian artist Emil Orlik was among the most prolific and inventive artists of the 20th century. Although he made many paintings, his most outstanding contribution to the group’s legacy was as a draughtsman and printmaker, demonstrating his excellence in woodcuts, etchings, and lithographs. Travels through East Asia and Japan profoundly influenced the nature of Orlik’s prints, as seen in his linear calligraphic detail and intricate floral patterns. In addition, much like Auchentaller, Orlik often took on commissions to produce posters for public events, demonstrating how the style of his art could be translated into an everyday life context and allowing him to experiment with various decorative styles of typography. A prime example is the stunning Plakat Miniaturenausstellung, 1906, featuring curling paisley motifs and angular, Art Deco style lettering.

The Ongoing Legacy Of The Viennese Secession

By 1905, Gustav Klimt and his many followers had left the Viennese Secession. Although the group continued for several more decades, it had lost the driving agency of its earlier years. Even so, the art movement continued to shape the development of art that followed. In Vienna, both Oskar Kokoschka and Egon Schiele were direct descendants of the Secessionists, exploring further the abstract, decorative approaches to color and ornamentation in visual art.

Although the Secession Building was severely damaged by Nazis during World War II, the building went under a dramatic restoration program in 1984, bringing Klimt’s Frieze and the surrounding gallery back to life. Since then, various contemporary artists have made stirring responses to the building and the Viennese Secession group’s legacy. These include action paintings by Hermann Nitsch, which echoed the spirit of the Gesamtkunstwerk, wall paintings by Sol LeWitt in a decorative, geometric style, and a dramatic intervention by the Austrian artist Peter Kogler, who adorned the gallery walls, hall, and ceiling with an all-encompassing environment. As a result, the Secession Building is now recognized as an inimitable icon of Austrian culture, marking a monumental period in the city’s path towards modernity.

Oskar Kokoschka: Degenerate Artist Or A Genius Of Expressionism