Artists CB Hoyo, David Shrigley, Juan Uribe, and Wayne White chose to send their messages through text-based art. Here’s what they have to say about the contemporary art market. 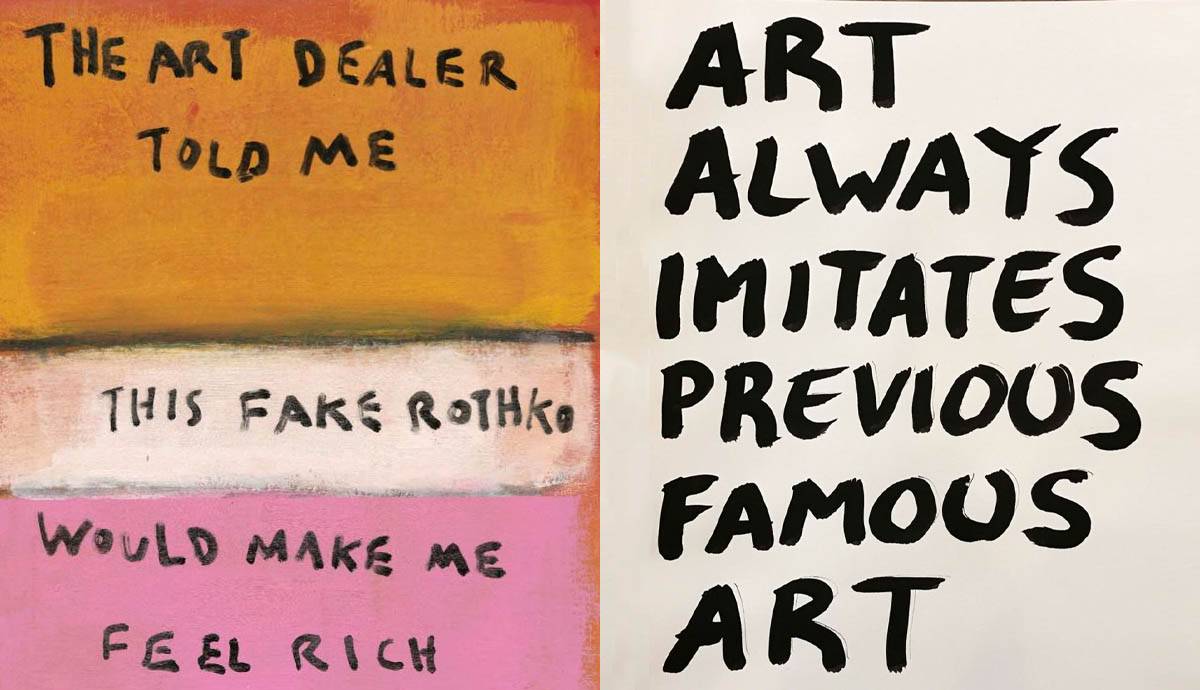 Many contemporary artists have started creating text-based art with the same revolutionary spirit as the artists of the 20th century, commenting on pressing issues of our reality. Take a look at some of the works of four contemporary artists who turn text into art: Juan Uribe has a very direct vocabulary, Wayne White takes “cheap landscape reproductions” to a new level, CB Hoyo has made a vast “Fakes” collection, and David Shrigley combines his messages with faux naïve paintings and drawings.

Before Juan Uribe & Co: The Origins of Text-Based Art

Text-based art has been officially around since the 1950s. It appeared as a reaction against the high culture denoted by Abstract Expressionism. Artists such as Jackson Pollock, Mark Rothko, Willem de Kooning, and Clifford Still wanted to get back to the basics, to the pure act of creating art without any symbolism attached to it. That is how the New York School was born. But not all artists were comfortable with reducing art to its techniques, its theory, so a few new movements were born from this. Willem de Kooning changed sides as he became one of the pioneers of conceptual art. Others went along with giving a direct, not-at-all hidden meaning to their art and therefore created text-based art or word art. Some text-based artworks became famous all over the world, such as Barbara Kruger’s “I shop therefore I am” and Robert Indiana’s “LOVE” sculpture.

On Wayne White’s personal webpage, the “Word Paintings” section begins with a quote that seems to encompass White’s approach to text-based art: “I took a vacation from the Art World in cheap landscape reproductions. There’s nobody in there. Haven’t been for years. Just jump in like the kids in Mary Poppins. Build giant letters that say exactly what you want to say. And you can do it every which way.” Wayne White was born in 1956 in Chattanooga, Tennessee, United States, and worked a big part of his life as a set designer and cartoonist.

Like Juan Uribe, Wayne White also uses irony as a light motif of his text-based art. From a technical point of view, he doesn’t actually paint the landscapes himself, but buys them from markets or thrift shops and then puts his signature 3D words over. The words are made out of big, chunky letters in WordArt aesthetics, in warm, pastel tones of pink, purple, orange, or blue.

The most interesting fact about Wayne White’s text-based art is that the irony to the art world doesn’t come from the meaning of the words imposed on the canvases but from the technique itself. He converts the paintings into objects, as the painting becomes a blank canvas to Wayne White. He leaves the original landscape’s artist signature uncovered, owning the appropriation. The text onto the landscape also has an ironic note to it, but it doesn’t come as a protest against the art world, but rather to the world itself, highlighting issues such as beauty standards, drugs, money, and so on. Ironically, these cheap landscapes that White turned to circle back to Juan Uribe’s criticism of the expensiveness of the art world, speaking about what mass art has become and making us question an alternative system of the art world.

Born in 1995, CB Hoyo is the youngest of the artists included in the article. He is a self-taught Cuban artist, who lives and works in Europe. He is also very active on social media, starting conversations with his followers about art, about the issues which he addresses, about very awkward and personal subjects. Hoyo works with various mediums from painting to sculpture and installation. But no matter the medium, his art is text-based. Unlike Juan Uribe or Wayne White, who turn to “readymade” canvases, when it comes to his criticism towards the art world, CB Hoyo paints his canvases from scratch. This means he creates 1:1 fakes of famous paintings that he then writes over with different messages.

The Art Dealer Told Me This Fake Rothko Would Make me Feel Rich (2017) is a perfect example of CB Hoyo’s style in protesting against the closed circuits of the art world and the statute that art gives its collectors. The artist somehow traces a line between art collectors and humans, ironically commenting on how everything would fall into place the moment you own a prestigious artwork. Which, to be honest, is not a lie. He highlights the fact that the art market revolves around collector money and owning a work of art from a renowned artist, especially Old Masters or Modern art, gives you social power. He somehow circles back to the original reaction of text-based art to Abstract art (for example in his Mark Rothko fakes), giving it a contemporary twist. But beyond Hoyo’s messages, looking at the whole picture, his art is complex and direct. He shows great technique while keeping the works light and easy to digest. Of course, this may not be everybody’s cup of tea.

David Shrigley was born in 1978 in the United Kingdom and now lives and works in Brighton. Though he has experimented with photography, print-making, and sculpture, his main medium continues to be painting. With a child-like approach, Shrigley doesn’t make commentary on the financial and social status of the art world, but talks about the artist from an artist’s point of view and then from a visitor’s.

In works like Untitled (2014) he challenges the artist’s responsibility outside of their studio, emphasizing the fact that visitors will take into consideration the problem exposed, and that most likely some debates will arise. It is up to the artist, suggests Shrigley, that he assumes social responsibility for the work that has been displayed. His point of view is valid, as most people who are constantly in contact with the art world will affirm. When anything and everything can be art, when do we become critical? When do we draw the line?

Why We Got The Sack From The Museum shows how far David Shrigley can go with satire. Shrigley shows his satirical approach to the role of an artist, the work they do, the work they are expected to do, and most of all, to what the public appreciates today. Compared to his recent works, which approach day-by-day events and “simple” thoughts, works such as this one have a more cartoon-like aesthetic. The use of word art here looks like something that came out of a comic book. However, Shrigley’s works find their way to a wide audience – hence Uribe’s sarcastic work I’ve Swear I’ve Never Seen Shrigley’s Work. Finally, the artists manage to get their message through.

Juan Uribe’s art feels rather like a scolding, especially if you are part of the art world, either as an artist, a gallerist, or a constant visitor. We might know that these problems with the art world are there, but we are rarely made to face them in this way. Juan Uribe was born in 1985 in Bogota, Columbia, where he still lives and works today. He approaches art world issues from a Latin American point of view, or should we say, from outside the Western art bubble. Most of his text-based art is both an appreciation and an appropriation. Juan Uribe has respect for the artists who became famous and their art, but at the same time, he has a very strong position against the way galleries have been using the same rigid system for the past few decades.

I Went Down On High Culture is part of a series between 2015-2016 in which the artist chose to “expose” the art world, through short, direct messages painted on paper. All of these artworks use irony as their basis. Juan Uribe is constantly trying to bring forward the fact that while art has become very expensive, or as he calls it “impossible to buy”, artists still make less money than the other parties involved. In other works, he places art at the top of Maslow’s pyramid of needs, commenting on how exposure of and to culture and art itself should be a priority, but context, closed circuits, and money has turned it into an expensive whim. Juan Uribe refuses to accept the art world we live in, though not being able to change it, he instead raises awareness to its problems. 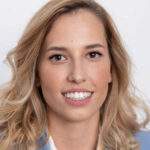