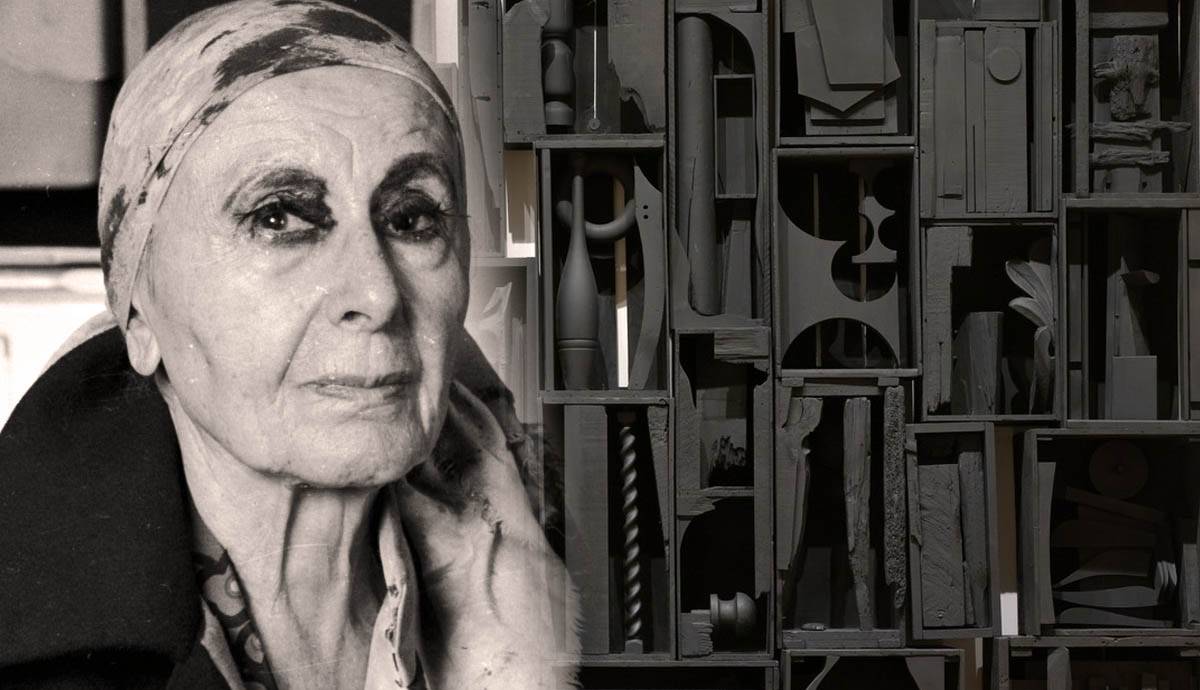 In 1899, American artist Louise Nevelson was born Leah Berliawsky to a Jewish family in the Poltava Governorate of the Russian Empire, which is in present-day Ukraine. When she was a young child, Nevelson’s family immigrated to the United States, where she was first exposed to the explosive modern art of New York City. By the time she was in high school, Nevelson became determined to pursue a career as an artist in New York—in part to escape the economic hardships and religious discrimination her family experienced as immigrants in their suburban community.

Louise Nevelson: From the Russian Empire to New York

As a young adult, Louise Nevelson met and married Charles Nevelson, who came from a wealthy American family. In the 1920s, the couple moved to New York City, where Nevelson gave birth to a son and, despite the disapproval of her in-laws, pursued coursework in drawing, painting, singing, dancing, and other art forms. Within a few years, Nevelson had separated from her husband and begun art classes at the Art Students League of New York, where she explored conceptual art and the use of found objects in assemblage, which led her to focus on sculpture.

In 1931, Nevelson sold a diamond bracelet from her now ex-husband to finance a trip to Munich to study with German-American artist Hans Hoffmann, who taught many up-and-coming Abstract Expressionist artists. Upon her return to New York City, she continued to experiment with plaster, clay, and terracotta in her early sculptures. To help make ends meet as a single mother in New York City, she taught art classes at a Boys and Girls Club in Brooklyn as part of President Roosevelt’s Works Progress Administration. She also worked as an assistant to Diego Rivera on his Rockefeller Center mural paintings.

Soon, Louise Nevelson would gain recognition as a serious artist, win prestigious awards, hold her first solo exhibition, and dramatically expand the scope of her work—from the materials she used to the size and location of her sculptures, to the institutions that recognized and exhibited her work.

How Louise Nevelson Sculpted With Wood, Metal, and Found Objects

Louise Nevelson is best known for her wood sculptures that are dynamic, geometric, and abstract. While walking around New York City, she would gather discarded wooden objects and pieces—a process influenced by Dada artist Marcel Duchamp’s found-object and ready-made sculptures—to turn into art. Each object was typically small and nondescript, but when assembled together became evocative and monumental.

Wooden boxes, each filled with carefully composed assemblages of smaller objects, would be stacked together and painted monochromatically. A finished piece, resembling a three-dimensional puzzle, might stand alone, be mounted on a wall, laid on a museum floor, or exhibited in a combination of placements to prompt viewers to become aware of their immersion into the artwork and to question their perception of space and three-dimensionality.

Louise Nevelson became especially interested in the visual and emotional impact of covering her wooden assemblage sculptures in black paint. She said, “When I fell in love with black, it contained all color. It wasn’t a negation of color. It was an acceptance… You can be quiet and it contains the whole thing.”

Later in her career, Nevelson was drawn to industrial materials—including Cor-Ten steel, aluminum, and Plexiglas—which allowed her to create larger and more complex sculptures. These materials also allowed her sculptures to be displayed in outdoor spaces. Nevelson was in her seventies when she was commissioned to create her first outdoor sculpture at Princeton University. The American artist described the experience of creating an outdoor sculpture as a sort of awakening: “I had been through the enclosures of wood… and come out into the open.”

The Abstract Expressionist movement was in full swing when Louise Nevelson arrived in post-war New York City. This new movement positioned the United States as the center of the art world by rejecting traditional, representational art in favor of an improvisational and non-representative approach to art that focused on conveying an emotional experience rather than a specific narrative, often at a physically large scale. Like other American artists within the movement, Nevelson grew interested in creating monumental emotive works that experimented with shape, line, color, and scale.

Abstract Expressionism was a male-dominated movement—as was the New York City network of galleries, museums, and other opportunities for artists—but that didn’t stop Louise Nevelson from asserting herself as a serious artist within those restrictive spaces and becoming a figurehead of installation art and feminist art during her career.

Installation art emerged as a legitimate art form in the 1960s and remains one of the most popular forms of contemporary art today. Artists create installation art to fill an entire space, utilizing light, sound, and audience interaction as part of the final piece. Louise Nevelson was among the pioneering artists—and among the first women artists—to participate in this new genre. Feminist art developed in the 1970s when women artists and historians drew attention to the exclusion of women in museum collections and art history textbooks. Feminist art theory began to develop, and artists who identified with the moment began using art to engage with and express the lived experience and oppression of women in society.

During her career, Louise Nevelson made significant waves in the realms of feminist art and installation art. Before Nevelson, women artists were often considered incapable of creating large-scale artworks worthy of a large footprint in a museum public space. But Nevelson insisted that her sculptures were vitally important—and that the creative efforts and life stories of women artists deserved the same types of representation their male counterparts received. Over the course of her career, Nevelson’s sculptures grew in scope and size, inspiring younger generations of artists to assert themselves in the physical and figurative spaces in the art world that had excluded non-white, non-male artists for too long.

The Nevelson Chapel: Abstract Sculpture as a Spiritual Refuge

Like many of her contemporaries, Louise Nevelson was also interested in exploring the spiritual nature of abstract art. She hoped her monumental sculptures could facilitate transcendence to what she called “the in-between places.” One such project, and perhaps her most ambitious, was The Chapel of the Good Shepherd—a tiny meditation chapel tucked away in Midtown Manhattan. Also known as the Nevelson Chapel, this nondenominational space is a completely immersive sculptural environment, with every element created and curated by the artist. The result is a tranquil, meditative environment of universal spiritual refuge amidst the chaos of New York City.

The Nevelson Chapel includes nine large, abstract sculptures, painted white and mounted on white walls, emphasizing the movement of shadow and light from the chapel’s solitary window. Gold-leaf accents throughout the chapel bring a sense of warmth to the geometric, cool white shapes. The Nevelson Chapel incorporates no overtly religious iconography or even any representational art. Rather, Louise Nevelson imbued her own sense of artistry and spirituality throughout the space, drawing upon her family’s Jewish faith as well as Christian traditions to create a unique space meant to facilitate a variety of theological and spiritual experiences. The artist herself described the chapel as an oasis.

Louise Nevelson is remembered as one of the most important and impactful American artists of the 20th century. From wood assemblage sculptures mounted on museum walls to monumental metal installations in courtyards, Nevelson contributed to a collective rethinking of how art and exhibition spaces can be experienced by viewers. The American artist also leveraged her success as an artist to push back against the outdated conventions of the art world, including sexism. Her work is exhibited in museums around the world and held in esteemed private and corporate collections.

Today, a Louise Nevelson sculpture can be as thought-provoking and boundary-pushing as it was when it was first exhibited several decades ago—a testament to the artist’s enduring legacy and innovative contributions to the continually unfolding history of modern and contemporary art.