HomeStoriesAmadeus vs. Salieri: A Feud Between Bitter Rivals

Amadeus vs. Salieri: A Feud Between Bitter Rivals

Learn about the enigmatic relationship between two ingenious composers, Wolfgang Amadeus Mozart and Antonio Salieri, and its depiction on the silver screen in the famous film Amadeus (1984). 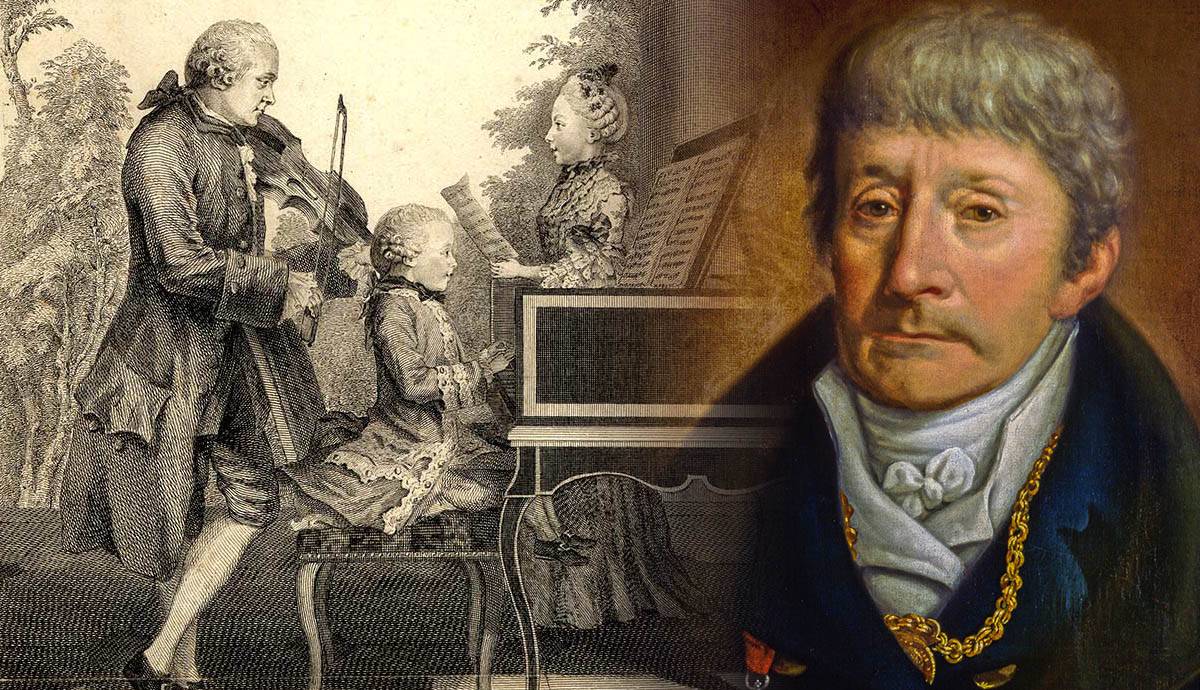 “Salieri didn’t murder Mozart, but Pushkin for sure murdered Salieri.” This saying perfectly summarizes the context behind the traditional understanding of Antonio Salieri’s malice towards a fellow composer, Wolfgang Amadeus Mozart. The idea of hostility between the two awe-inspiring minds arises from a play called Mozart and Salieri, written by the Russian poet Alexander Pushkin. In the play, published five years after Salieri’s death, Salieri murders Mozart. The piece was the basis for Peter Schaffer’s play, Amadeus (1979), and Milos Forman’s movie of the same name from 1984. The film is mostly historically accurate in portraying Mozart, but that cannot be said for the movie’s central point – the spiteful envy of Salieri.

The Splendor And Calamity Of Wolfgang Amadeus Mozart

Wolfgang Amadeus Mozart, celebrated nowadays as one of the greatest composers of all time, lived through the early years of his life as a child prodigy. His father, Leopold Mozart, a composer himself, recognized his son’s talent for the first time at the age of five. From that moment, Leopold dedicated his life to little Mozart’s career. The family voyaged all around Europe to have young Amadeus perform before monarchs and nobles.

In the film, Salieri says that Mozart composed his first concerto at the age of four, his first symphony at seven, and a full-scale opera when he was just twelve years old. Modern experts believe that Mozart wrote his first symphony at eight and his first concerto at eleven years of age. As for the opera, most would cite La finta semplice, written when he was twelve years old. Leopold Mozart often lied about Wolfgang’s age to make him seem even more miraculous. Therefore, Salieri’s statement in Forman’s movie most likely falls in line with what was believed at the time.

Frequently, Wolfgang would perform tricks, such as playing the piano while blindfolded. On other occasions, Leopold would cover his hands with a cloth so that Mozart couldn’t see the keyboard.

Young Mozart had no choice but to give up his childhood in exchange for a music career. Hence, it is not surprising that, as a result, Mozart came to possess certain traits of emotional immaturity. In reality, this comes to prove in the example of Wolfgang’s letters sent to his cousin Marianna. Through these private letters, the other side of his personality comes to light. A side defined by a humorous vulgarity and his unexpectedly eccentric character. This particular part of Mozart’s nature comes to life within his portrayal in the movie Amadeus.

In the movie, Mozart says: “Forgive me, Majesty. I am a vulgar man! But I assure you, my music is not.” Instead of presenting him as a flawless prodigy, the film Amadeus sheds light on Mozart as a definite contradiction to his music. We watch his character on screen, acting like an immature man-child. He is vulgar, intoxicated with alcohol, and constantly giggling.

Allegedly, the concept behind Wolfgang’s bizarre giggle in the film comes from references to such a type of laughter in letters written by two women who once met him. They described his laughter as an infectious giddy and wrote that the sound of it resembled metal scraping glass. However, there is no official relevant historical evidence to support this characteristic.

The beyond-annoying giggle in the film most likely interprets as a comical effect and a dramatic device, as well. The frantic giggles of Amadeus embody the mocking laughter of the gods, as Salieri states.

There are also a few real-life anecdotes from Wolfgang’s life mentioned in the screenplay. One of them is the interaction between the young Mozart with Marie Antionette at one of his performances. Another example is the scene in which the Emperor critiques Mozart’s opera, Abduction from the Seraglio. He complains that the piece has “too many notes.”

“All I wanted was to sing to God. He gave me that longing… and then made me mute. Why? Tell me that. If He didn’t want me to praise him with music, why implant the desire? Like a lust in my body! And then deny me the talent?” – Antonio Salieri’s character says in the famous film.

Fortunately, in reality, there was not a soul who could deny the talent of an Italian composer, Antonio Salieri. In Amadeus, we meet Salieri as a bitter, aging man confined to a mental hospital. He is telling the last confession of a life, tainted with envy, to a young priest. He has lost faith in his God, who bestowed the might of divine talent upon Mozart, a fool unappreciative of his gifts.

In Amadeus, Salieri deliberately sabotages Mozart out of jealousy for a gift of a man he regards as amoral. However, there is no historical evidence of anything more than a friendly, artistic rivalry between the two composers.

In the film, the significant fragment of the plot depicts Salieri as a celibate who chose an act of celibacy as a way to express gratitude to God for the blessing of his musical gift. In real life, he was a married man who, tragically, eventually lost both his wife and his only son. In correlation to this, Salieri’s unexpressed love for Katarina Cavalieri, one of his students, is shattered by the realization that Mozart seduced her. On the contrary, Katarina was in fact Salieri’s mistress.

In reality, the world recognized Antonio Salieri as one of the best music teachers of his generation. An array of his outstanding students all adored him, some of whom were Franz Liszt, Franz Schubert, and the great Ludwig van Beethoven. He taught many of his students for free, enabled by his marriage into nobility and the royalties earned from his operas. They were all very successful and frequently performed in Paris.

Salieri was, essentially, wiser with his expenditure than Wolfgang, who was widely known for his lavish lifestyle habits. Antonio Salieri died as the wealthiest composer in Vienna, while, sadly, Wolfgang Amadeus Mozart was imminent to poverty upon his premature death. At the time of his prime, Salieri was one of the leading composers in Europe. Therefore, approval from such an important figure was of undeniable significance.

There is plenty of substantial historical evidence of Salieri being supportive of Mozart’s music. In one of the letters to his wife, Constanze, Wolfgang describes Salieri’s attendance at his opera, The Magic Flute. Salieri allegedly was astounded, greeting Wolfgang Amadeus Mozart with warm accolades. There is also evidence to validate the likelihood that Antonio Salieri was even tutoring Wolfgang’s younger son.

A fundamental theme of the film is the shift in Salieri’s belief in God, which might correlate with the very name of the film, Amadeus. Namely, Wolfgang Amadeus Mozart’s middle name in Latin translates as “the love of God.”

Salieri believes that Mozart’s composition is so pure that the only explanation is that Amadeus serves as a vessel for God, who is the one composing those masterpieces. The myth of their supposed rivalry originated with a rumor. The source traces back to Mozart’s letter to his wife, Constanze, right before his premature death, in which Mozart states that he believes that someone is poisoning him.

This statement began to circulate after his passing, at the time when many people tried to push the production of German operas. Immense difficulties were surrounding this matter, as all the notable opera directors were Italian and believed all opera should play out in the Italian language. Many German composers of the time resented Italians for this, and Salieri was, in fact, in the very center of the imperial court.

There are also letters between Wolfgang Amadeus Mozart and his father Leopold, blaming the Italians and, in particular, Salieri, for Wolfgang’s struggles to establish himself as a prominent composer in Vienna. Unfortunately, this contributed to the idea that Salieri may have murdered Mozart.

When Salieri tried to commit suicide in 1823, tragically, people interpreted this act as proof of his overbearing guilt. However, this was most likely due to his developing case of dementia. In the film’s climax, a man disguised in a black uniform comes to the agonized Mozart, pretending to be his late father. He arrives with a request of Mozart to write the Requiem Mass for him. That was not, as the movie narrates, Salieri.

In real life, in 1791, Austrian Count Franz von Walsegg, who was notorious for commissioning other people’s music to pass as his own, approached Amadeus to ask for a requiem for his wife who died on Valentine’s Day. Wolfgang Amadeus Mozart passed away before he could complete the Requiem Mass, but Salieri was not the one who helped him in his final work. It was the Austrian composer and probably Mozart’s student, Franz Süssmayr.

Entitling Salieri with that role delivers one of the most remarkable scenes of the movie. We watch Salieri stand by his bedside while Wolfgang Amadeus Mozart recites the notes with his dying breath. The scene awakens both the feelings of inspiration and growing sorrow, as we are aware of the inevitable tragedy that’s to come.

Many Mozart enthusiasts are not approving of his portrayal in the movie. However, it is refreshing to see such a character on screen, especially as it is an embodiment of one of the most significant historical figures. We see a man torn apart by the duality of the creative process, both genius and mad. We perceive him no longer as an indecipherable deity but simply as a human being with a gift, able to outlast generations.

In the final scenes of Amadeus, we see Wolfgang Amadeus Mozart’s coffin carried out of the church and thrown into the pauper’s grave. The scene plays Lacrimosa, from the Requiem Mass, evoking the Lady of Sorrows. The choir sings in Latin:

Judicandus homo reus (To be judged)