Andean culture has, over the millennia, produced artwork with unique attributes. Here are some of the most noteworthy characteristics of Andean art. 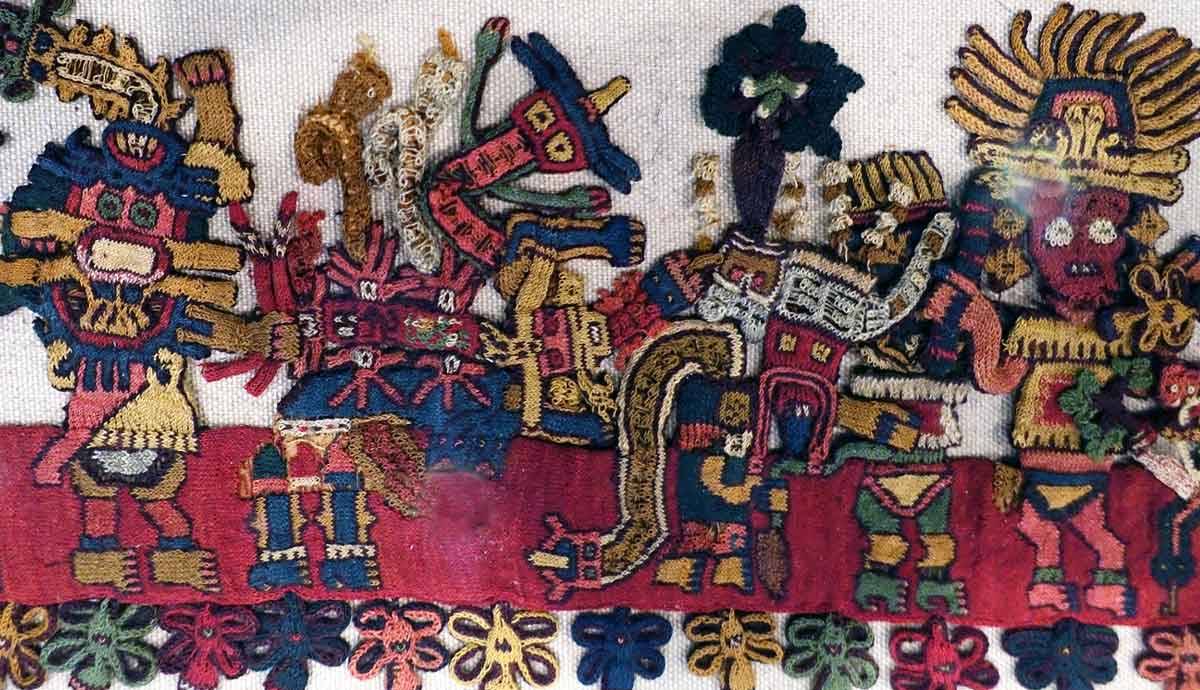 The Andean region of South America has been the home to various civilizations that have existed for over three and a half thousand years. As such, there is a long tradition of artwork that evolved, drawing influences from neighboring cultures within the region, and to the present day, where the medium has incorporated the Catholic tradition into its own array of design traditions. The characteristics of Andean art, and subsequently neo-Andean, art is thus replete with unique features that define and continue redefining the local culture, traditions, and beliefs, guiding the art in a cycle of influence. It is fascinating in that it is very different from the accepted forms of other ancient civilizations, defying the western expectation of art.

Here are 6 important characteristics exemplified in the artwork of Andean and neo-Andean culture.

1. Andean Art & Its Connection to the Divine

Andean art is notable in that the subject matter is often connected to the divine, with the primary focus being on the subject rather than the appearance. That is not to say, however, that the subject’s appearance was unimportant. Sacred imagery in pre-Columbian Andean art often used precious metals, bright colors, and fine textiles to represent divine nature. After the Spanish conquest, the source of the divine became entangled with the Catholic faith, and these same media were (and still are) used to represent the new deities. The malleable nature of artistic expression was key in forging new forms of religious identities, with novel forms of Catholicism being born that incorporated traditions from the Andes rather than a full adoption of Spanish culture and ways of worship.

2. The Concept of Dualism Is Very Common

Various concepts of dualism were entrenched deeply in Andean religious beliefs and thus entrenched into cultural practice, notably in art. This representation has been apparent in the oldest Andean art, from thousands of years old (as old as the preceramic period, 4000 BCE) to the present.

Perhaps the most important duality is the concept of life paired with death. Nevertheless, a host of duality concepts are represented in Andean art. Opposing ideas such as night and day, sun and moon, male and female, and left and right are all depicted. Where there are no opposing ideas, inverted symmetry is used to depict the concept of duality.

Complimenting or opposing dualism is also represented via the use of color. Gold and silver are especially notable here because the colors are linked to metals, further linked to belief. Silver was believed to have originated from the moon, while gold was thought to come from the sun.

Dualism is also represented via the ceramic arts. On the south coast of Peru, Paracas and Nazca potters produced bowls and pots as pairs of identical items. In Moche culture, the decoration of vessels has also been the subject of debate over the meaning of symbolism. The Moche are especially known for their anthropomorphic designs on their pottery. The later Andean culture of the Incas and subsequent post-Spanish conquest cultures also created sacred beer-drinking vessels out of wood that were always produced in pairs.

The famous Nazca lines of Peru are symbolic of many characteristics of Andean art. They represent the divine; however, they also show dualism in that they were constructed by humans but meant to be seen from above, from the divine. Until the invention of flight, it was impossible for any human to see them in their full glory.

An unusual feature of Andean art is the depiction of faces that stare directly forward, as opposed to the side-profile depictions prevalent worldwide in pre-industrial civilizations. Archeology has revealed this form of art existed for millennia before the Spanish conquest and was shared across the entire Andean region. They also appeared in all media forms, including ceramics, metals, textiles, shells, and stones.

The faces often include wide eyes that fix upon the onlooker head-on. They are bold and unsubtle in their intent to draw the focus of the viewer. Even though their precise meaning is unknown, it seems easy to speculate on the intention of conveying a sense of intense emotion, perhaps trying to instill fear with an intimidating gaze.

4. A Focus on the Miniature

While photographs of museum items convey the details of an object, they rarely convey its true size, as they lack other things in view which can be used for comparison. We look at many photographs of Andean art without contextual knowledge and assume the object to be larger than what it is. The reality is that much of Andean art focused on small, intimate objects rather than on the grandiose. Items were designed to be worn, or held in hand, to impress each other in a small setting rather than inspire awe from a distance.

This focus on art in miniature is not unusual in civilizations around the world, least of all in modern civilization. We seek to impress with finely filigreed jewelry at social events, but while this is simply an aspect of western culture, in Andean culture, it was turned into a major art form that defined Andean artistic focus.

Many examples of this focus on the miniature can be seen throughout various media in Andean art, from textiles to jewelry, metalware, and pottery. Regarding the latter, prominent examples are the traditional Moche culture ceramics that represent various figures and scenes in detail.

Of particular note in Incan textiles but found everywhere in Andean art is the striking feature of the prevalence of geometric designs, with lines often restricted to 135-, 90-, and 45-degree angles. Not only are patterns derived from this simple rule, but representations of animals, humans, and scenes are also reduced, or rather transformed into a system whereby they are represented by the strict adherence to the geometric. The geometric shapes are bold in their structural design but also in their use of vivid colors. These colors became muted after the Spanish conquest in order to satisfy a colonial audience that demanded items in color combinations that were more agreeable to the expectations of design in Spanish homes.

Andean art has been shaped by geometric symbolism for millennia. It continues to the present through all forms of media, notably in textiles, ceramics, and the inarguably unique and beautiful Neo-Andean architecture in Bolivia. Bolivian architecture speaks to the history of communities and provides hopeful (and extraordinarily beautiful) visions for their futures.

The architecture, centered around the town of El Alto in Bolivia, is the work of Bolivian architect Freddy Mamani, who has also, through his projects, inspired others to add to the wealth of Neo-Andean architecture. Over 100 Neo-Andean structures inhabit the El Alto skyline and are a particular point of pride among the Aymara people of Bolivia.

Throughout much of Andean culture, the creation of art was seen as a part of labor, much the same as constructing buildings, farming, selling goods, or any other kind of work. Art was seen as a product with a specific use rather than “art for art’s sake.” Art was created to be worn as clothes, to be burnt or buried in funerary rites, or to be used to entertain guests and influence people. The function of art went beyond the need to be viewed (at least by mortal eyes). Some art was created to be hidden. Objects were constructed for the sole purpose of being put in tombs or buried to venerate the earth gods. And some objects were designed with their destruction in mind. Burning and breaking objects in religious rites released the spiritual essence imbued upon the object.

Andean art has evolved over the millennia and has adopted and observed many communities within its sphere of influence who have, in turn, guided its design, production, and use. Modern forms of Andean art show that the cultural impact of the ancestors lives on alive and well in their descendants, who continue to produce traditional pieces as well as evolve the art towards new pathways of expression.