After the October Revolution, Anti-Religious Soviet Propaganda depicted scenes of extreme violence. Over time, it became less aggressive, shifting towards technological utopianism. This evolution reveals much about Soviet society. 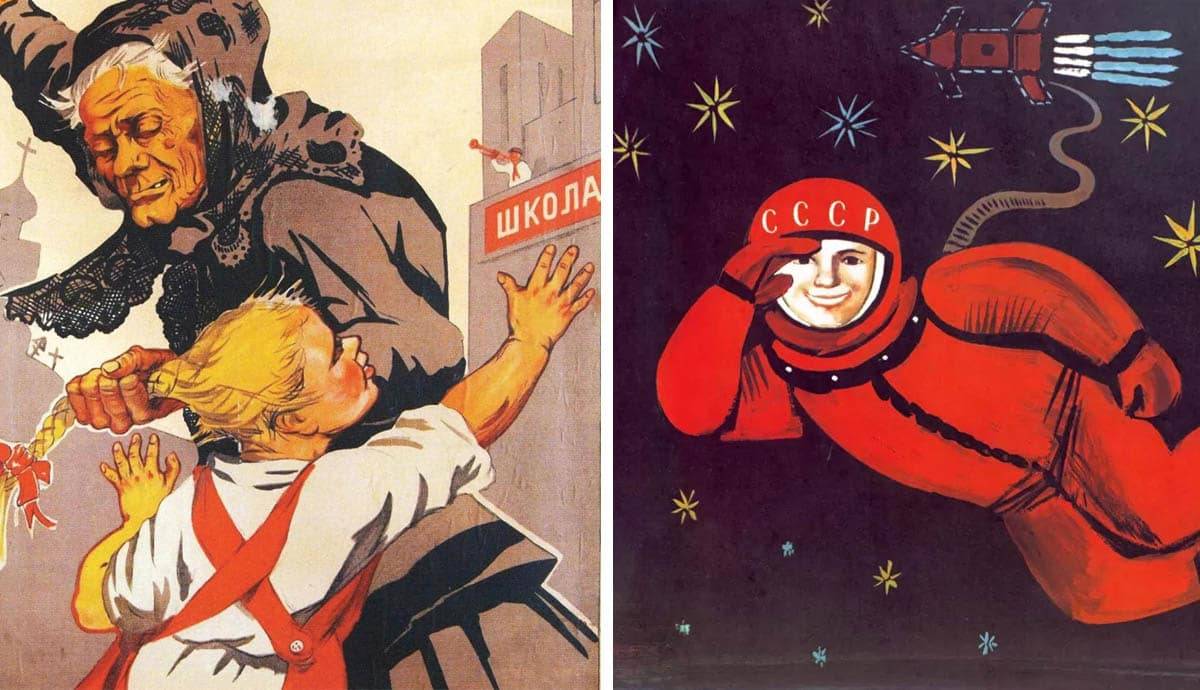 Upon attaining power in October 1917, the Bolsheviks set out to eliminate Religion in the Soviet Union. They ruthlessly set about this task, deploying the formidable power of the state to stamp out religion. Soviet Propaganda posters were one tool they used to convert people to their way of thinking. These posters reveal how Soviet anti-religious policy developed over time. Initially, a ruthless strategy of complete elimination was followed. However, with the outbreak of World War 2, Soviet Propaganda shifted, moving towards a more persuasive approach that heavily emphasized technological utopianism.

1. Soviet Propaganda After the October Revolution

Upon seizing power, the Communists, who represented all that was new and radical, vowed to build a new world atop the ruins of the Russian Empire. A core part of their revolutionary program was eradicating all forms of religion from society. This impulse stemmed from Marxist doctrine, which held that religion was a product of oppressive political structures and unjust economic relations. The Bolsheviks believed that religion posed a danger to the Communist project, and thus urgently sought to exorcize it from Soviet life. They adopted an actively eliminationist approach to religion, à la revolutionary France or Kemalist Turkey. This decision, which caused untold suffering and misery, is reflected in contemporary propaganda posters.

Soviet propaganda posters of the 1920s and ‘30s tended towards ultra-violence. This poster, published in 1923, is a classic example of this trend. It shows an act of depraved communion, with a rabble of religious practitioners literally eating Jesus’ body and drinking his blood. It is a gruesome scene. The parishioners’ eyes are bloodshot, their skeletal hands grasping and clawing. Jesus’ stomach has been ripped open. An old woman greedily guzzles his entrails. Chunks of flesh have been ripped from his leg. Alluding to the Holy Lance of the Crucifixion, blood and water flows from a wound in Jesus’ side. Here, it spills into the chalice of a thirsty priest. The intensity of this poster shows how seriously the Soviets took religiosity and how determined they were to exorcize it from Soviet life.

2. Cracking Down on Religion in the Soviet Union

This poster, published in 1928, shows a tractor mercilessly bearing down on a kneeling priest, bearing an Orthodox Cross and thurible (censer). The driver, supremely confident, holds a steady course. The poster’s simple color palette reflects the clarity of the message: the might of Soviet industry will surely prevail over weak and decadent religion.

Although this Soviet Propaganda is not as gratuitously violent as the first poster, it is still an aggressive image. As such, it accurately depicts the nature of Soviet anti-religious policy in the two decades after the October Revolution. Upon seizing power, the Soviets enacted brutal administrative regulations against religious institutions. They banned the teaching of religious instruction, removed the Church’s status as a legal entity, and barred it from owning property. Such repressive measures became progressively more violent. In 1923, a dozen clergymen and a Catholic priest were put on trial for peacefully protesting these measures. The priest was put to death, while the rest of the defendants received long prison terms. The anti-religious crackdown crescendoed as Stalin consolidated his grip on power.

In 1931, the Soviets dynamited Russia’s largest church. Their campaign of terror reached a final peak during Stalin’s purges of 1937, when Orthodox priests, Muslim imams, Jewish rabbis, and Buddhist lamas were sent to firing squads and labor camps. Anti-clerical brutalities were widespread.

The situation changed dramatically when Nazi Germany attacked in 1941. World War 2 was an unimaginably brutal conflict, and the Soviets fought tooth and nail to survive. Several factors forced Stalin to abandon the antireligious status quo. His wartime allies felt alienated by the religious repression. In occupied territories, the Germans found favor with local populations by opening churches. Finally, there was a religious revival among Soviet citizens themselves, who petitioned to open local churches.

World War 2 necessarily ushered in a period of religious rapprochement and relative stability in church-state relations. This state of affairs was then maintained throughout Stalin’s last decade in power. Stalin’s successor, Nikita Khrushchev, would revive the campaign against religion.

3. The Turn Towards Technological Utopianism

Nikita Khrushchev, installed after Stalin’s death in 1953, revitalized the anti-religious Soviet Propaganda project as part of a general populist, mobilizational approach to politics. Under his leadership, religious sites were monitored, disrupted, and destroyed and popular practices, such as feast days and pilgrimages, were undermined. Importantly, however, such repression never reached the violent heights of the early days of the U.S.S.R. This tempering of violence is reflected in the relative dovishness of Soviet propaganda posters from the 1950s onwards. In this, we can see “a shift from an eliminationist approach towards secularism to one that was focused on reg­ulating and to some degree even accommodating religiosity.”

On the 12th of April 1961, cosmonaut Yuri Gagarin was launched headlong into the cosmos, becoming the first man in space. An unknown Lieutenant upon take-off, he returned as a Soviet icon, a Major, and a sex symbol. With tears of joy streaming down their faces, people huddled around radio receivers to hear of his triumph. Fêted throughout the Soviet Union, the young fighter pilot’s visage was ubiquitous. Classically balanced and partially abstracted, this poster shows him tethered to his spaceship, smiling a million-ruble smile against a backdrop of highly-stylized stars. Wearing a coral-red jumpsuit and helmet, which reads U.S.S.R in Cyrillic, and with his right hand raised to his brow, Gagarin strikes the classic explorer’s pose. The slightly-askew spires and domes of various religious buildings peak into the frame.

A quotation dash attributes the capitalized exclamation to Gagarin: “БОГА НЕТ!”. The poster’s message is clear, its tone triumphant. Outer-space is empty. “THERE IS NO GOD!” Compared with earlier manifestations of anti-religious soviet propaganda, this poster is noteworthy for its relative geniality. By this time, the ferocity of the Soviet anti-religious campaign had eased off. The anti-religious propaganda of the Khrushchev era attempted to win new atheistic acolytes not through sheer force but instead by scientific suasion and by brandishing technological achievements against religious structures and doctrines.

4. The Persistence of Religion

This Soviet propaganda poster from the 1970s shows a hipster strolling along the beach, guitar in hand. Wearing a cross around his neck, a pack of cigarettes in his jeans, shoulder-length hair, and stylish glasses, the hipster is turning heads. The poster is entitled “Appearance Among the People,” alluding to the appearance of Christ during at a Jordan River baptism and parodying a painting by the Russian artist Alexander Ivanov. The text in the bottom right of the panel alludes to a poem by Alexander Pushkin, who is widely regarded as the greatest Russian poet.

In this poster, Religion in the Soviet Union is depicted not as an existential threat to the regime, but instead as an ill-considered fashion statement. The poster is jocular and light-hearted. Clearly, the elimination approach adopted by earlier propagandists had by now long been dispensed with. Now, the Soviets were struggling to understand the persistence of religion. The U.S.S.R. was much more urbanized and literate than it was 60 years earlier. The churches had been pulled down and replaced by theaters and TV towers. Religion in the Soviet Union was thought to be the product of oppressive political structures and unjust economic relations, yet hadn’t those been torn out root and branch? The staying power of religion baffled the true believers.

5. The Failure of Soviet Propaganda

This poster, published in 1981, depicts a utopian Soviet city, made up of sleek high-rise buildings, including a cinema, university, and a “Palace of Pioneers”. The Soviet star bedecks the tallest building. Red rays of light radiate outwards. A young boy looks up longingly at the city. He tries to wrest himself away from his grandmother, who is pulling him into a lifeless, gray church. Needless to say, the utopian dream portrayed here never materialized. “The problem with utopia,” in the words of Peter Hitchens, “is that it is reached only across a sea of blood, but you never arrive.”

The U.S.S.R. collapsed not long after this poster was published. Religion in the Soviet Union was never eradicated. In fact, the bitter irony of the Soviets’ attempt to forge an atheistic society is that communism itself came to resemble a terrible, sulfurous religion. The Soviets were missionaries and crusaders, straining to spread world revolution. Their ideology was replete with “elaborate dogmas and inspired scriptures.” Faith in the Marxian gospel was absolute. Heretics were exiled to the Gulag Archipelago. The embalmed Lenin became a relic, and Stalin a God. The cosmonaut Yuri Gagarin, discussed above, was placed in the pantheon of Soviet saints.

Here, Gargarin strikes a pose reminiscent of Rio De Janeiro’s Christ the Redeemer. Just like Moses descending from Mt. Sinai, Gagarin visited mystical heights and brought back divine knowledge: “БОГА НЕТ!”.  Soviet power used a wide variety of different tools to turn its vision of a Communist world without religion into a reality. Yet even with its monopoly on ideology and power, and despite the best efforts of their propagandists and the hundreds of thousands of Soviet Propaganda posters that were printed, they ultimately failed in their quest to overcome religion. 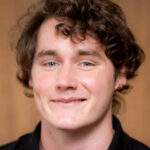 By Scott MacalisterBA History & German LanguageScott has a BA in History and German Language from Victoria University of Wellington in New Zealand. His area of historical expertise is the totalitarian horrors of the 20th century. Scott is a keen runner, reader, and chess player. He has motorcycled across the Laotian countryside, and ran an 80km ultramarathon through the jungles of Northern Thailand. Scott has hiked the Pacific Crest Trail in American and Te Araroa Trail in New Zealand.