HomeAncient HistoryHow Did a Debt Crisis Lead to Athenian Democracy?

How Did a Debt Crisis Lead to Athenian Democracy?

How did Athenian democracy spring from the land crisis of the 7th century, and the despair of people becoming slaves to fulfill debts? 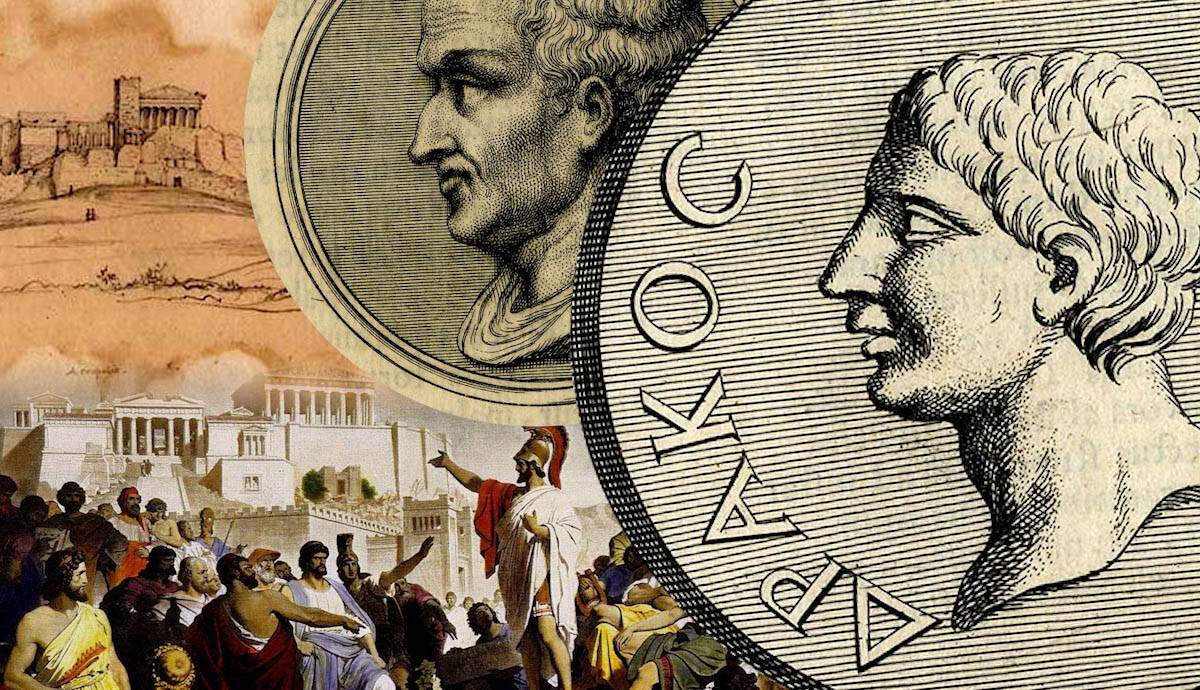 The world is governed by forces beyond the individual. Governance, finances, and other institutions are human constructs yet have the power to change so much in our lives. This was true throughout the history of human institutions, even back in ancient Greece. What happens when these institutions lead us astray? In 7th-century Athens, people had to grapple with a debt slavery crisis resulting from their government, legal, and economic systems. The Athenians appointed Solon to introduce sweeping reforms of various institutions, including the very essence of their political system. After Solon’s reforms, he vanished to 10 years of self-exile. What he left behind was the foundation upon which one of the earliest democracies, the Athenian democracy, would be built.

What Happened When There Was No Athenian Democracy

In the 7th century BCE, before Athenian democracy, Athens was governed by Archons, who held the leading political office. Archons ruled alongside the  Council of the Areopagus. This council was the main ruling body and consisted of all the old Archons who had passed a test of worthiness. Council membership was for life, meaning that councilmen couldn’t be voted out of office.

At the time, Athens was a largely agrarian economy. It was based on the production, trade, and sale of agricultural goods. Wealth depended on one’s production capacity above all. Unlike a market economy, where one has many ways to gain wealth with only their own body and mind, in 7th century Athens, to make money you likely needed land.

Unfortunately, land was in increasingly short supply in Athens, and Attica – the greater region the city controlled. During the first half of the 1st Millennium BCE, the Greek city-states were experiencing a population boom. The city of Athens itself more than doubled from 7000 to 20,000 people between 700 and 500 BCE. Corinth solved this problem with colonies, making it mandatory for a portion of the population to go to new lands. The Athenians had no such stipulation.

As land supply dwindled, people’s production capacities dwindled with it. People with smaller allotments or poorer quality land struggled to cope with years of poor harvest. Without profits, they couldn’t buy materials to plant the next harvest and had to borrow money instead. This money was lent by wealthier landowners, who still had the ability to make a profit on a bad harvest. The collateral given on these loans was their land; the very thing that allowed them to make money in the first place!

A second year of bad harvest meant the wealthy landowners gained new land, and the original owners became surfs on their land. They could take what food they needed to feed themselves but couldn’t sell any surplus and make their own money. Bit by bit, Athenian farmland was concentrated in the hands of the wealthy. Poor people who could sell surplus had to pay rent to the landowners. If they couldn’t afford the rent, they were made into debt slaves. In Athenaion Politeia, Aristotle writes:

“All the land was in the hands of a few, and if the poor failed to pay their rents both they and their children were liable to seizure.”

By the 6th century BCE, Athens had a serious debt and slavery crisis on its hands. Even the wealthy Athenians who profited from this system of loans and collateral were perturbed by the slavery of their fellow statesmen. They needed a drastic change, both to the economic institutions which caused this mess and the government systems that allowed it to happen. To this end, they elected the Archon Solon, who laid the foundations for Athenian democracy.

Solon began his term as Archon in 594 BCE, following a successful career in military and political leadership. He had made himself out to be a man of strong character, who disavowed tyrants and had a sturdy sense of justice. He was elected to have special powers to force through the drastic reform that Athens needed.

A major element of Solon’s reforms was his setting up of a class system by wealth. The wealthiest were the pentekosiomedimnoi, those who produced 500 measures of wheat on a weekly basis. The hippeis, or hoplites, were those that could afford a suit of armor. At the time, armor for military service was not provided by the state, so one needed to provide their own armor.

The zeugitai were those who could afford a team of oxen to work their land. This is notable because the extra labor allowed them to build up agricultural surplus and profit. Finally, there were the thetes, the landless laborers who had borne the brunt of the debt slavery crisis. Where the previous class system dealt with people based on hereditary rank, people were now apportioned rights and protections according to something more tangible.

Solon directly tackled the slavery issue by canceling all debts and freeing all debt slaves, in a move referred to as the ‘Shaking off of the Burdens’. All land lost as collateral on unpaid loans was given back to original owners and it was made illegal for an Athenian to put themselves up as surety on a loan. The only step Solon didn’t take here was redistributing land so poorer people had better access to quality land. However, this would have been a step too far for Athens’s wealthy class. The wealthy appreciated the spirit of Athenian democracy, but not when it severely impacted them.

Solon reformed the government system. Previously, Athens had been ruled in an oligarchic system by the Archons and the lifelong Council of the Areopagus. Now they were ruled by the Ekklesia and the Boule. The Boule consisted of elected senators who discussed and proposed rulings and laws. The Ekklesia consisted of all Athenian citizens, right down to the landless thetes.

Previously, only elites had any real say in government. In theory, all citizens were now represented and could have their say in matters which affected them. This included laws relating to the debt and slavery system, which heavily impacted them. This was a very significant step towards greater equality within Athens. However, as with property redistribution, Solon had to walk a thin line to avoid offending the upper classes. Only the top 3 classes of his system could run to be elected to the Boule, and only elites could be elected to the position of Archon.

Solon also leveled the playing field in another curious way; he reformed family laws that institutionalized the nuclear family of one man, his wife, and their children. Children fathered outside the marriage no longer had the same rights as children born within. This meant having concubines – once the preserve of the elite – was no longer a sanctioned option. Now elites had to have just one wife and set of children, like all other citizens – including the poor ones! This leveling reflects the equalizing spirit of Athenian democracy.

Before Solon, Athens was governed by the laws of Draco. His 7th century BCE laws were based on the principle that people had to pursue their own justice by acting out the state-ordained punishments against those who wronged them. Draco wrote exceptionally harsh, unwarranted punishments into his laws. Death was the punishment for nearly every crime, including murder and petty theft. Draco’s laws, unsurprisingly, are where we get the term ‘draconian’ from today. His laws were not much improvement on the previous status quo, which consisted of blood feuds and relative lawlessness, the antithesis of what we consider the later Athenian democracy to be.

Solon rectified this by scrapping the system of pursuing one’s own justice. Instead, people went through the courts, where every citizen could receive the verdict of a jury. Fair trials are considered a key component of any democracy, including Athenian democracy.

The Birth of Athenian Democracy

Athenian democracy would reach one of its high points with the reforms of Cleisthenes.  He wrote his reforms c. 507 BCE, building on Solon’s reforms.

He re-organized the four descent-based tribes, which constituted Attica’s political organization into ten geographically organized tribes. One of the tribes was made up of people from different regions around Attica, aiding in breaking down factionalism between tribes. It was the responsibility of each tribe to train together and work together in battle and look after more domestic affairs like putting on festivals.

Most importantly, they each chose 50 people to represent them in the Boule, making a council of 500 people to discuss and propose laws. This was one of the defining institutions of Athenian democracy. We see this geographical-based representation system in some of today’s governments, including Australia’s electorate-based election system. This involves residents from each electorate voting for politicians to represent them in government.

By Isabella TropeBA Ancient History and Archaeology in-progressIsabella is completing a BA in Ancient History and Archaeology at Macquarie University. Her favorite topics to learn and write about are feminist historiography, numismatics, and ancient Sumer. She hopes to one day work in the museum sector, helping illuminate why history matters to everyone. She can be found polishing her coin collection, reading a fantasy novel, or on a bushwalk in her free time.