The Succession Problem: Emperor Augustus Searches for an Heir

Augustus established the Roman Empire, charting its path to greatness. Yet, the entire enterprise almost collapsed at the very start, as the emperor had trouble finding a worthy successor. 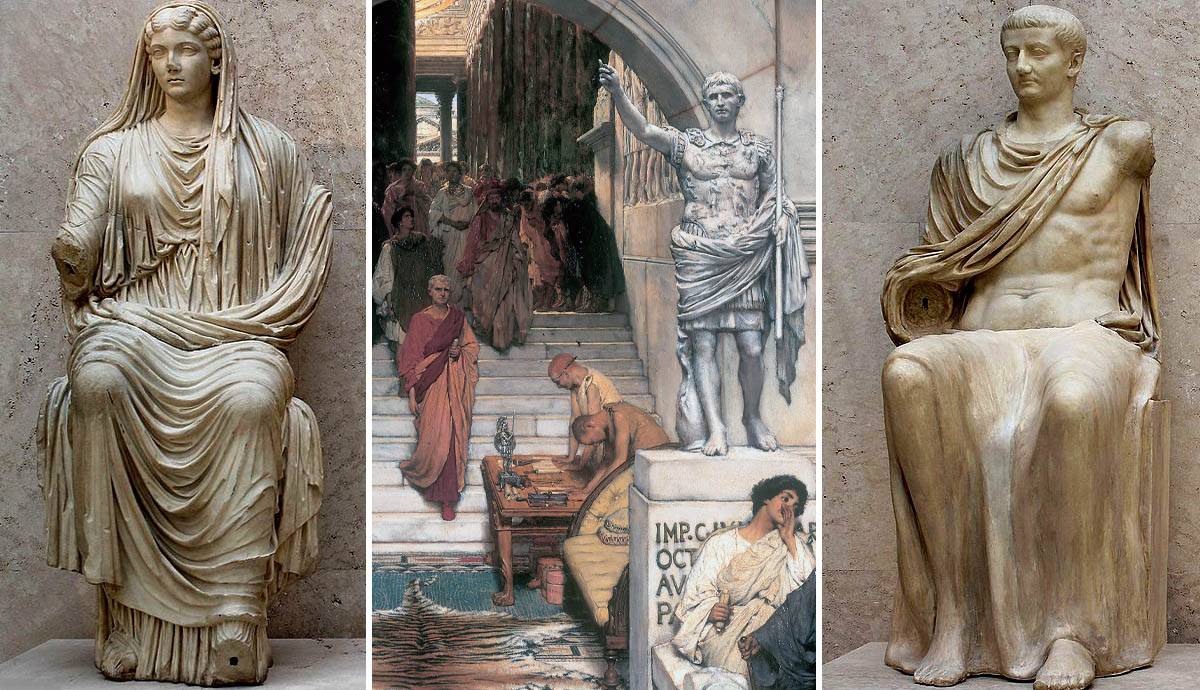 Augustus was probably the most powerful man in the ancient world. The first Roman emperor ruled over an enormous territory spanning three continents, having complete control over both the government and the imperial legions. During his lengthy reign, Augustus encountered no rivals, bringing the Romans internal peace and stability after an era of chaos and civil war. Trade, art, and culture flourished with Rome entering its golden age. The grandiose building projects transformed the capital to such a level that Augustus famously quipped of “inheriting a city of brick, but leaving one built of marble”. It is without a doubt that Augustus built a strong and lasting foundation for his new Empire. Yet, the tireless emperor faced one major flaw. A problem so grave, it threatened to destroy his life’s work. Despite his best efforts, August could not find an heir.

In 23 BCE, Rome woke up to shocking news. Its leader, Emperor Augustus, was gravely ill. The situation was particularly dire, as mere decades had passed since the last civil war. The emperor’s death could result in another power vacuum, bringing back chaos and destruction. Luckily for the Romans, Augustus quickly recovered. Yet, for the rest of his life, the first Roman emperor became obsessed with resolving a vital question. Who should succeed him and inherit his life’s work — the Empire?

Like his adoptive father, Julius Caesar, Augustus had no son of his own. Nor did he have any brothers. Instead, the emperor had to rely on three women in his family: his sister Octavia, his daughter Julia, and his third wife, Livia. Augustus turned to his sister first, or better to say, to her teenage son Marcus Claudius Marcellus. To further strengthen the bloodline, he forced the 14-year-old Julia to marry his nephew. The emperor then took over, appointing the youth to several high-ranking government posts. Marcellus became a consul — the highest Roman office (besides the emperor) — a decade earlier than was usual. The hurry reflected Augustus’ preoccupation with forming his own dynasty. At this early stage, blood was not enough. To rule the Empire, Marcellus needed all the experience he could get, as well as the respect of his subjects.

Centuries after the dissolution of the Kingdom, the Romans were still haunted by the memories of the last Roman monarchs. Augustus himself trod this ground carefully, avoiding presenting himself in royal trappings. Luckily for the emperor, the only serious competition to Marcellus was Augustus’ childhood friend and closest ally: Marcus Vipsanius Agrippa. Agrippa lacked the blood, but he had many abilities essential for leadership. His martial skills and skills as a commander made him popular among the soldiers — one of the main pillars of Roman society. Agrippa also possessed engineering skills, being responsible for major building projects in the Empire. A good politician, and more importantly, diplomat, Agrippa maintained a favorable relationship with the Roman Senate, who had to approve Augustus’ candidate.

Despite choosing Marcellus, when he fell ill, Augustus gave his signet ring — the symbol of imperial power — not to his nephew, but to his trusted friend. While such an act probably angered Marcellus, one could provide a different explanation. Augustus, fearing imminent death and ensuing chaos, saw the experienced Agrippa as the right man to lead the Empire and prepare Marcellus for the throne.

Any competition between two potential heirs, real or imagined, ended with Marcellus’ death later that same year. Augustus’ nephew, and heir, was just 19 years old. The lavish funeral organized by the bereaved emperor and his burial in Augustus’ newly built mausoleum suggests a shift to dynastic rule. For the first time since the days of the monarchy, members of one dynasty would be buried in one place. Furthermore, Marcellus’ quasi-divine honors prepared the ground for Augustus’ posthumous divinization and the establishment of the imperial cult. Yet, all that was yet to come. For now, Augustus’ immediate preoccupation was to confront the pressing issue — to find a new heir.

Not One But Many: Julia’s and Livia’s Sons

Soon after Marcellus’ untimely death, Augustus turned to Agrippa, marrying his closest friend to Julia. Both men profited from the marriage. Agrippa’s already strong position was further consolidated as from now on, he was officially part of the imperial family. In Agrippa, Augustus found a strong and loyal co-ruler, and the Empire had two leading men on whom it could rely. Most importantly, the union between his friend and daughter alleviated Augustus’ woes. Agrippa and Julia had five children, three of them boys — all potential heirs to the throne. Augustus could now plan the future for his Empire. The emperor adopted both Gaius and Lucius, grooming his grandsons from an early age.

However, despite their strong claim, both boys were too young to take a political or military position, required for the throne. Thus, Augustus turned to his more mature relatives. Luckily for the emperor, his third wife, Livia, had two sons from a previous marriage. Even better, both Tiberius and Drusus (born in 42 and 38 BCE respectively) had proven to be competent generals, having played a major role in the Augustan expansion in northwest Europe. It was under their command that the Roman legions pushed deep into Germania, scoring spectacular victories over their barbarian foes.

Livia’s sons’ chances to ascend the throne increased following a series of tragedies in Agrippa’s household. While both men were the same age, everyone assumed that the robust soldier Agrippa would outlive the frail emperor. Then in 12 BCE, following his latest successful campaign, the 50-year-old Agrippa unexpectedly passed away. To Augustus’ horror, both of Agrippa’s sons, his favorite heirs, soon followed. In 2 CE, while en route to Spain, 19-year-old Lucius fell ill and died. Just 18 months later, his older brother Gaius was wounded during a skirmish in Armenia. Augustus probably sent Gaius to the East, so his grandson could gain glory and military credentials. Instead, Gaius became one of many Roman leaders whose oriental expeditions resulted in their doom. While not serious, his wound festered, resulting in the boy’s death. He was only 23. The Augustan temple at Nimes, rededicated in the memory of the emperor’s ill-fated grandsons, points to further developments in solidifying the imperial cult.

Instead of the luxury of choice, Augustus was once again threatened with a lack of heirs. The situation was now even more severe as by this time, the emperor neared old age, with death being a realistic proposition. Agrippa’s third son — Agrippa Postumus (born after his father’s death), was removed from the line of inheritance due to the boy’s excessive cruelty and ill-tempered manner. Augustus had no choice but to turn to Livia’s sons.

At this point, more of Augustus’ heirs filled the sarcophagi in the family mausoleum than stood in line for the throne. In 9 BCE, Livia’s younger son and hero of the Germanic campaigns — Drusus — perished in a freak accident, having fallen from his horse. Drusus’ demise left Augustus with only one heir. Tiberius, the reclusive soldier, was not too happy to take the throne. However, he had no choice. In 11 BCE, a year after Agrippa’s death, Augustus forced Tiberius to divorce his beloved wife (Agrippa’s daughter Vipsania) in order to marry Julia. Julia too, who at this point was nothing more than her father’s pawn, was not happy with her predicament. Yet, Augustus’ word was final, and one could only comply.

The marriage was an unhappy one. Julia, resentful of being repeatedly used in dynastic games, sought happiness in scandalous affairs. Enraged by his daughter’s misbehavior, Augustus banished his only child from Rome, never fully forgiving her. Tiberius, too, went into self-imposed exile, trying to distance himself from his controlling father-in-law. According to some reports, Tiberius’ “exile” could have been the result of his displeasure with Augustus for favoring Gaius and Lucius.

Whatever transpired, in the end, Tiberius was the last man left standing. And as such, he was Augustus’ last and only hope. In 4 CE, Tiberius was recalled to Rome, where Augustus adopted him and proclaimed him as his heir. He was given a share of Augustus’ maius imperium, something that even Agrippa had never had. For better or worse, Tiberius was to be the next Roman emperor.

Despite his fears, Augustus lived for a long time. He finally died in 14 CE of natural causes (a rarity in that period) at the age of 75. The emperor passed away knowing that his legacy was secure. Unsurprisingly, the succession went smoothly. Already during the last years of Augustus’ life, Tiberius took over the reins of the state, becoming the emperor in all but name. Now he was the only person sitting on the throne, the most powerful man in the Roman Empire.

Tiberius’ peaceful elevation was Augustus’ ultimate success. While he emerged as the sole victor of the bloody civil war, toppling the Republic in the process, Augustus’ position as emperor was not yet formalized, and as such, it could not be transferred to someone else. The imperium, the legal authority that conferred the command, could not be inherited by its very nature. Yet, during his long reign, Augustus, step by step, undermined  Republican traditions, accumulating all the powers in his person, including a monopoly over the military. With no one able to question him, he could transfer it all to his heir. After all, the Roman senators traditionally passed their status, wealth, and connections to their offspring.

The problem, however, was that Augustus had no son to whom he could pass his immense privileges. The solution was family. Augustus turned to the next closest male blood relative, creating an imperial family, and consequently, the first dynasty. Initially, the emperor planned to choose an heir of his own bloodline — among the members of the Julian family. However, after the deaths of Marcellus, his nephew, and then his grandsons Lucius and Gaius, Augustus had to abandon his plans and search for a successor in his wife’s family — his stepson Tiberius. Thus, the Julio-Claudian dynasty was born.

Augustus, however, did not stop there. The emperor instructed Tiberius to adopt his own nephew, Germanicus, simultaneously designating Tiberius as his successor, but also Germanicus, a member of his own — Julian — family, as the next emperor. And Tiberius obliged. He adopted Germanicus, treating him with respect, at least during his early reign. Augustus’ plan, however, almost fell apart, with the unexpected death of Germanicus in 19 CE. The death of the war hero (with or without Tiberius’ involvement) was followed by a purge within the imperial family. Tiberius, however, spared Germanicus’ last remaining son, Augustus’ great-grandson Caligula, who would become the next emperor. Caligula’s violent end at the hands of the Praetorian Guard (another of Augustus’ inventions), left the throne to his uncle Claudius, a member of the Claudian family. Augustus’ bloodline, however, gave one more ruler, and coincidentally, the last emperor of the first imperial dynasty — Nero.

Following the death of Nero, Rome was confronted with another civil war. Yet, the Empire — Augustus’ life work — survived and continued to prosper. Only in 1453, almost a millennium and a half after the death of Rome’s first emperor, his legacy came to its end, with the fall of Constantinople to the Ottoman Turks.