With her distinctive shapes and use of material, Barbara Hepworth revolutionized modern sculpture. Here are 5 interesting facts about the English sculptor and her work. 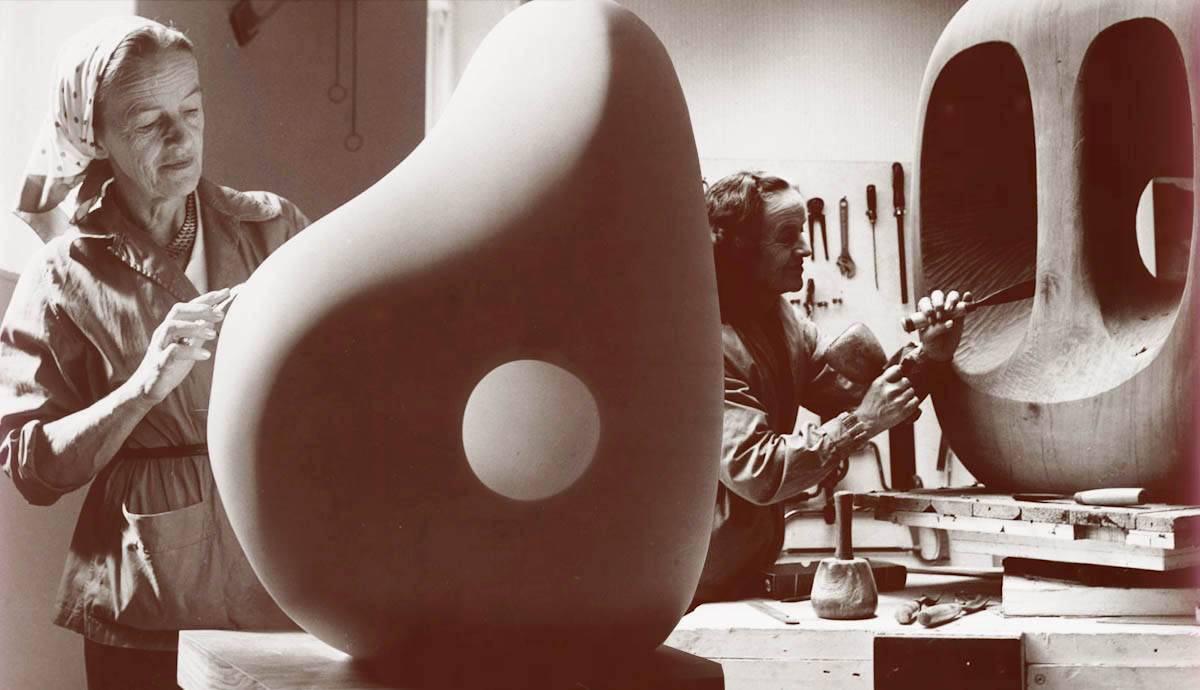 Barbara Hepworth is a well-known English sculptor who created a considerable number of abstract works during her lifetime. She frequently commented on her work, the process of making sculptures, and what inspired her art. Her texts, quotes, and statements are a valuable extension of her work and contribute to the understanding of her life, her experiences, and her art. Here are 5 facts about Barbara Hepworth as well as a few quotes by the artist to learn more about her work and her ideas.

1. Barbara Hepworth Was Part of an Artist Colony

Barbara Hepworth is known for her connection to the seaside town St Ives in Cornwall. The artist moved there with Ben Nicholson in 1939, shortly before the outbreak of the Second World War. In 1949, Barbara Hepworth bought the Trewyn Studio in St Ives, where she moved one year later. She worked and lived at the studio until her death. Today, the studio is known as the Barbara Hepworth Museum and Sculpture Garden. Her sculptures were heavily influenced by the landscapes of the area.

Barbara Hepworth’s Landscape Sculpture is exemplary of this relationship between the landscape of St Ives and her art. Hepworth wrote that the strings of the sculpture “were the tension I felt between myself and the sea, the wind or the hills.” The term St Ives School describes artists who worked and lived in or near the town St Ives from the 1940s to the 1960s, even though the artists did not refer to themselves as part of a school.

The members of the St Ives School shared certain characteristics, such as their interest in creating modern and abstract art as well as the influence that the landscape of St Ives had on their work. After the end of the Second World War, the seaside town developed into a hub for modern British artists who created abstract works. This avant-garde movement was led by Barbara Hepworth and Ben Nicholson and included artists like Bryan Wynter, Paul Feiler, and Bernard Leach.

They all incorporated the colors, shapes, and other sensory impressions of the local landscapes in their artworks. The painter Bryan Winter described this process by saying: “The landscape I live among is bare of houses, trees, people; is dominated by winds, by swift changes of weather, by moods of the sea; sometimes it is devastated and blackened by fire. These elemental forces enter into the paintings and lend their qualities without becoming motifs.“

2. She Preferred Her Sculptures to Be Shown Outside

“I always envisage ‘perfect settings’ for sculpture and they are, of course, mostly envisaged outside and related to the landscape. Whenever I drive through the countryside and up the hills, I imagine forms placed in situations of natural beauty and I wish more could be done about the permanent siting of sculptures in strange and lonely places. I prefer my work to be shown outside. I think sculpture grows in the open light and with the movement of the sun its aspect is always changing; and with space and the sky above, it can expand and breathe.”

During the Second World War, Barbara Hepworth sometimes photographed her artworks next to the sea in St Ives. The English Sculptor preferred the exhibition of her pieces in the open air to her sculptures being shown in galleries. Due to the objects’ vivid interaction with nature, Barbara Hepworth felt that sculptures should be shown in the changing moving environment of the outdoors. Hepworth described this preference by saying:

“I’m sick of sculptures in galleries & photos with flat backgrounds. I don’t refute the validity of either or indeed the truth & strength of the tactile & architectural conception either – but no sculpture really lives until it goes back to the landscape, the trees, air & clouds … I can’t help it – I shan’t be truly happy until this is more fulfilled – it will be – even if it is only my own tombstone in Zennor!”

3. She Used the Technique of Direct Carving

In contrast to the method that sculptors employed traditionally, Barbara Hepworth used the technique of direct carving to create her sculptures. Before the 20th century, it was common for artists to prepare a model out of clay or wax. Craftsmen would later produce the actual sculpture from the artist’s model.

At the beginning of the 20th century, Constantin Brancusi started using the method of direct carving and other sculptors followed this approach. Barbara Hepworth is one of the sculptors who became well known for employing this method. The term direct carving describes the process during which the artist carves directly into the material without preparing a model beforehand. The technique was often used to emphasize the material and its characteristics. Sculptors usually used materials like wood, stone, or marble and kept the shapes simple and abstract. To further emphasize the shape and the material, artists would often polish the surface of their sculptures.

Barbara Hepworth’s smooth and uniquely shaped sculptures are products of this approach, which values the material and its properties. The English sculptor described her relationship with the method by saying:

„I have always preferred direct carving to modelling because I like the resistance of the hard material and feel happier working that way. Carving is more adapted to the expression of the accumulative idea of experience and clay to the visual attitude. An idea for carving must be clearly formed before starting and sustained during the long process of working; also, there are all the beauties of several hundreds of different stones and woods, and the idea must be in harmony with the qualities of each one carved; that harmony comes with the discovery of the most direct way of carving each material according to its nature.”

Even though Barbara Hepworth is famous for her sculptures, she also made various drawings and paintings that illustrate the work of surgeons and hospital staff. When the artist’s daughter Sarah was hospitalized due to an illness in 1944, Barbara Hepworth met the surgeon, Norman Capener. He provided her with the possibility to view the hospital staff perform surgery at Exeter and the London Clinic.

Hepworth created over 80 artworks depicting what she saw at the hospital from 1947 to 1949. She was fascinated by the surgeon’s hand movements and felt that there was a connection between their work and the work of an artist.

In the 1950s, Barbara Hepworth gave a lecture in front of an audience of surgeons explaining her experience and discussing the similarities she witnessed between artists and surgeons. The English sculptor said:

“There is, it seems to me, a very close affinity between the work and approach both of physicians and surgeons, and painters and sculptors. In both professions we have a vocation and we cannot escape the consequences of it. The medical profession, as a whole, seeks to restore and to maintain the beauty and grace of the human mind and body; and, it seems to me, whatever illness a doctor sees before him, he never loses sight of the ideal, or state of perfection, of the human mind and body and spirit towards which he is working. […]

The abstract artist is one who is predominantly interested in the basic principles and underlying structures of things, rather than in the particular scene or figure before him; and it was from this viewpoint that I was so deeply affected by what I saw in the operating theatre.“

The secretary-general of the United Nations Dag Hammarskjöld was a friend of Barbara Hepworth as well as an admirer and collector of her work. They shared the idea that artists have a special kind of responsibility within society. Hammarskjöld bought an earlier version of Single Form by the English Sculptor which the artist made from sandalwood. When Hammarskjöld died in a plane crash in 1961, the Jacob and Hilda Blaustein Foundation commissioned a piece in memory of the Swedish United Nations secretary-general.

Single Form explores the relationship between humans and sculptures. Hepworth wanted the viewers to relate to the artwork through its size. The English sculptor described the artwork by saying:

“It’s the right scale for human beings to relate to. They’ve left behind enormous buildings, and now here’s this vast façade of glass, but the sculpture is still on a human scale. A person walking round can encompass it as part of their life. And when you look down on it from the 38th floor, it’s like an old friend standing there below. I don’t believe in heroic sculpture – I want to get the human relationship right. When I’m working big, what concerns me most is first the perspective in relation to the height of man – for we don’t change, whatever else does – and then the movement which has to take place if you’re going to look at it, and finally I like to try to give an emphasis of quietude and draw out what I hope is some poetry.”