From Amy Sherald to Mickalene Thomas, these Black artists are redefining the Black body, identity, and sexuality in contemporary art today. 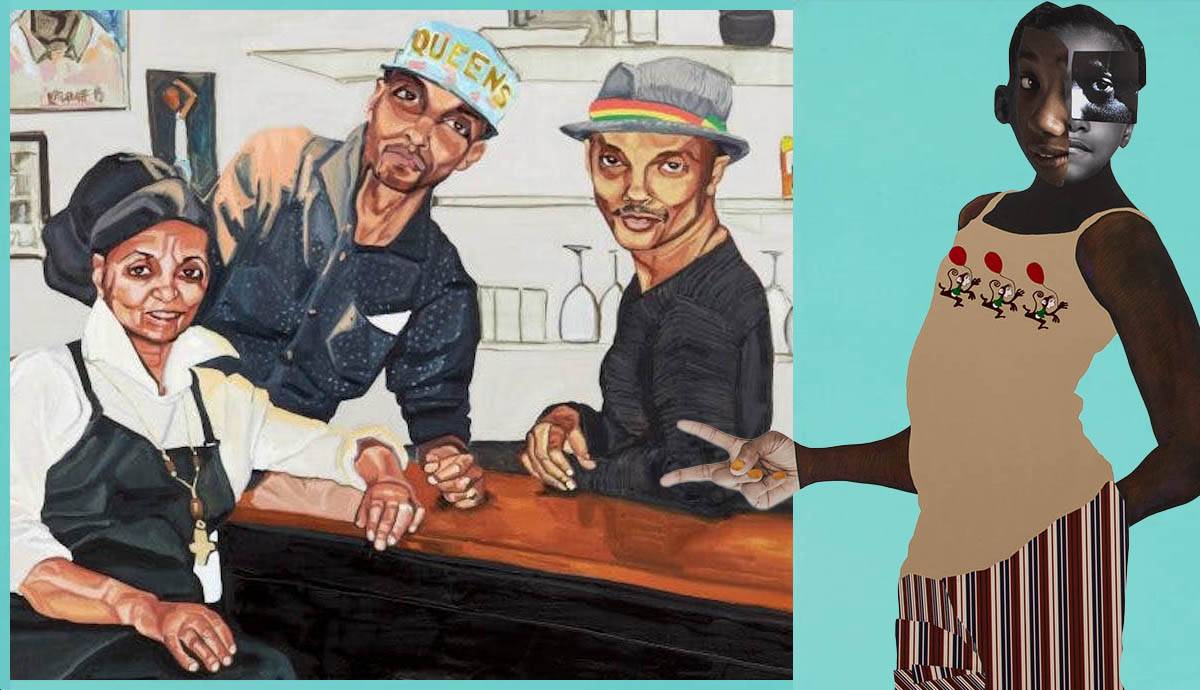 When it comes to the American cultural landscape, the contributions made by Black artists continue to be immense and valuable, to say the least. Historically, however, because of slavery and systemic racism, art made by the Black and African American community often remained well outside the mainstream. Thanks to the seminal efforts throughout the 20th century, predominantly the Harlem Renaissance and the Black Arts Movement, Black artists and activists propelled the revival of their culture and values. Powered by the fight for civil rights, the movements delivered works of art, literature, fashion, theater, that depicted Black struggles and experiences. In poignant ways, artworks by Amy Sherald, Jordan Casteel, Jennifer Packer, and others, define and celebrate the Black identity.

In a world of art still dominated by white men, women artists take up a fairly small space; for Black artists who are also women, the piece of the cake is even thinner. But even within such confinement, the influences of figures like Augusta Savage, Alma Thomas, Emma Amos, Faith Ringgold, and more recently Kara Walker, are indisputable. Their art paved the way for a new generation of Black artists, and especially female painters, currently engaged in the rebirth of portraiture.

The art market and institutional representation are Confirming portraiture’s status as one of the main genres of emerging contemporary art production. Artworks by Mickalene Thomas and Amy Sherald, for instance, sold above their estimates in auctions in 2021. In a less prosaic way, the Black women artists listed below are all on a steady rise in their careers, with museum and gallery shows taking place around the US and the world.

Occasionally walking the fine line between abstraction and figuration, these Black artists convey the raw capacity of the human spirit. At times, they capture the mundane of everyday life, other times, they create social commentaries and critiques. In all their diversity and vastness, the paintings encompass an emotional array of narratives from contemporary Black life.

Perhaps it was Amy Sherald who sparked the art public’s general interest in portraiture, and especially Black portraits, subsequently bringing it to the next level. In 2018, First Lady Michelle Obama selected the already then rising star to paint her for the National Portrait Gallery in Washington, D.C. Along with Kehinde Wiley, who painted President Barack Obama, Sherald became the first African American ever to receive a presidential portrait commission. The result was anything but the traditional depictions we are used to seeing within rich, golden frames.

Much like Amy Sherald’s other paintings, this 6 ft (1.8 m) by 5 ft (1.5 m) canvas sets Mrs. Obama against a plain, monochromatic background, focusing our whole attention on her persona. Staying true to her trademark style, the famous Black artist painted her skin in grayscale, challenging conventions on race and skin tones. Her gaze is piercing, placed at eye level like all Amy Sherald artworks, inviting for a dialog.

Another great, albeit famous example of Amy Sherald’s practice, is her portrayal of Breonna Taylor. It graced the cover of Vanity Fair magazine in 2020 and was jointly acquired by two major American art museums. Taylor’s stance and facial expression exude resistance and power, in homage to her and the movement that fights for her justice.

Despite being familiar figures, both Michelle Obama and Breonna Taylor come off as everyday people. In fact, this is what the artist does: her sitters are usually the people she meets on the streets, on the subway, or through other people, for instance. Sherald’s portraits capture Black life, as raw and as strong as it is.

In a similar fashion, but using a more vibrant palette that reminds us of Faith Ringgold, Jordan Casteel also portrays her community, the people around her, fellow classmates, and subway passengers. Her subjects’ skin tones range from lime green and brown to navy blue and light orange, simultaneously expressing their variety and individuality.

Casteel’s larger-than-life art deals with the notions of gender, sexuality, masculinity, identity, mainly among her Black peers. Looking straight at the viewer, the emotion that these portraits emit is imminent, like a mirror of our society and our own selves. The famous Black artist’s quest is almost an anthropological one that puts ordinary people on museum walls on a grand scale.

Casteel’s compositions are a result of the combination of multiple images taken of her sitters, in order to find the one that fits her feeling best. What they all have in common is a deep sense of humanity, nuance, and sensibility like no other.

In more ways than one, the artwork of Mickalene Thomas is iconic. It pays homage to Black femininity and sexuality in glossy, glamorous ways. It draws from art history and the landmark paintings done by the likes of Manet, but also movements like Impressionism and Cubism. Using rhinestones, collage, acrylic, and enamel, Thomas claims a space for the imagery of powerful, beautiful, strong Black women. Their reclining figures resemble those of white female figures from history and popular culture, but in a new light that radiates sexuality and where Black cultural references prevail.

Mickalene Thomas’s multidisciplinary practice spans paintings, collages, photography, video, and installations. With each piece, the fascinating Black artist translates the image of a Black woman from objectified to heroic. In her environments, these women thrive in their own skin and are proud of their beauty, challenging the viewer’s gaze and redefining it. Thomas is also often hailed for her unique portrayals of queer identities, which she helped integrate within the contemporary art realm.

Looking at the works of Jennifer Packer, one might say they depict a mood, rather than a person. It’s as if her subjects emerge from an abundance of color, to reveal themselves pensive, vulnerable, intriguing. Packer also paints still lifes and landscapes, but it is the portraits that have the most soul. They are intimate, and not just because Packer’s sitters are the people closest to her, but because of how simply alluring they are.

Packer’s paintings oscillate between snapshots taken from real life and scenes from a dream. Figurative, yet not always entirely legible as such, her portraits almost look unfinished at times, with unpainted patches of canvas or interrupted brushstrokes. This could be part of her intention to engage the viewers to “fill in the gaps” themselves, relying on the sensory impulses they get from the works. Packer’s drawings are tense in a different way, carrying a weight that her paintings are not able to.

Tschabalala Self’s art might remind us of that by Romare Bearden, informed by multiple visual elements at once, or that by Henri Matisse or even Louise Bourgeois, with silhouettes emerging from the pictorial plane and taking it over. Yet these artworks are definitely unique, in a manner that connects printmaking with painting, collage with sewing, found textiles with assemblage, stencils, casts, parts of other paintings. To Self, this mirrors human beings’ own fragmented selves, made up of memories and identities.

By giving materials a new purpose, Tschabalala Self investigates the notions of the Black female form in contemporary culture, the fantasies, and attitudes around it. The famous Black  artist sometimes exaggerates the bodies’ physical characteristics in order to challenge our preconceptions about it. Her figures are complex and tenacious, but also sensual, sexual, and introspective, proposing a new iconography surrounding the Black woman.

There are essentially four major themes interwoven in the work of Deborah Roberts: American history, Black history, pop culture, and Black culture. Her images are of Black children, juxtaposed against a plain white background using found images and hand-painted details on paper or canvas, but also sound and video installations. They’re critiques of race, gender, and identity politics that continue to reinforce otherness, especially among the most vulnerable parts of our society.

Physically and metaphorically, Roberts’ artworks are multilayered, riddled with symbolism and double meanings. In a climate that constantly works against them, the children depicted are encouraged to find their own paths, against all odds, typologies, and stereotypes thrown at them. They invite us to see them for who they are: fellow human beings with hopes and dreams. Roberts reminds us of their innocence, constantly under societal pressure and threatened by everyday violence.

What may be immediately perceivable when observing Genesis Tramaine’s art is the influence of 1980s urban New York graffiti, perhaps most notably Jean-Michel Basquiat. We might recognize a portrait of a person, messy and quite indecipherable. But it’s from the paintings’ titles that we get the hint of what these are actually about: results of the Black artist’s conversations and relationships with religion.

Called worship works and visual sermons, these paintings are not portraits of real people. Rather, they represent evocative, dynamic communications between the artist and gospels, God, Jesus, the saints, stories from the Bible. Tramaine’s devotion to the Catholic church is unapologetic and passionate, and it is often right there in the pews that she creates her art, interpreting the words of the Lord and getting to know herself at the same time. Like Francis Bacon did in the 1970s, Genesis Tramaine gives life to eerie, energetic, cathartic, striking heads, necks, shoulders, chests, and arms as if done in a trance.

“Easy to swallow, hard to digest” is how Nina Chanel Abney describes her own art. Cartoon-like and largely spontaneous, her paintings are a mixture of paint, spray paint, collage, and layering. Highly graphic and flat shapes are there to convey a deep message. Complicated topics are depicted using simple compositions and humor. Abney creates narratives that are legible and relevant, appealing and playful, yet provocative and loaded.

It is this visual naïveté that lures us in. Abney’s paintings practically absorb the viewers by posing as innocent, only to reveal a much more serious intent lying underneath, a little too late for us to get away. In this lies a strong analogy of the very themes the famous Black artist tackles in her work, be it issues of race, homophobia, gun violence, hidden in plain sight in an ever-frantic contemporary life. 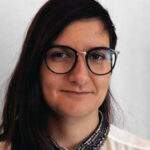 By Angie KordicBA PhotographyAngie Kordic earned her BA from the Istituto Europeo di Design in Milan, Italy. She has been working as an art writer and critic for over a decade, interested in contemporary art, photography, and street art. She wrote over 3,000 articles for online magazines, international print magazines, and catalogs. Angie is a frequent visitor to art fairs, galleries, museums, and book stores.

The Power of JR’s Street Art
By Angie Kordic, in Art