Pioneering photographer Cindy Sherman redefined the art of self-portraiture, transforming herself into a series of unlikely, bizarre, and disturbing alter-egos. Here are her most iconic and career-defining artworks. 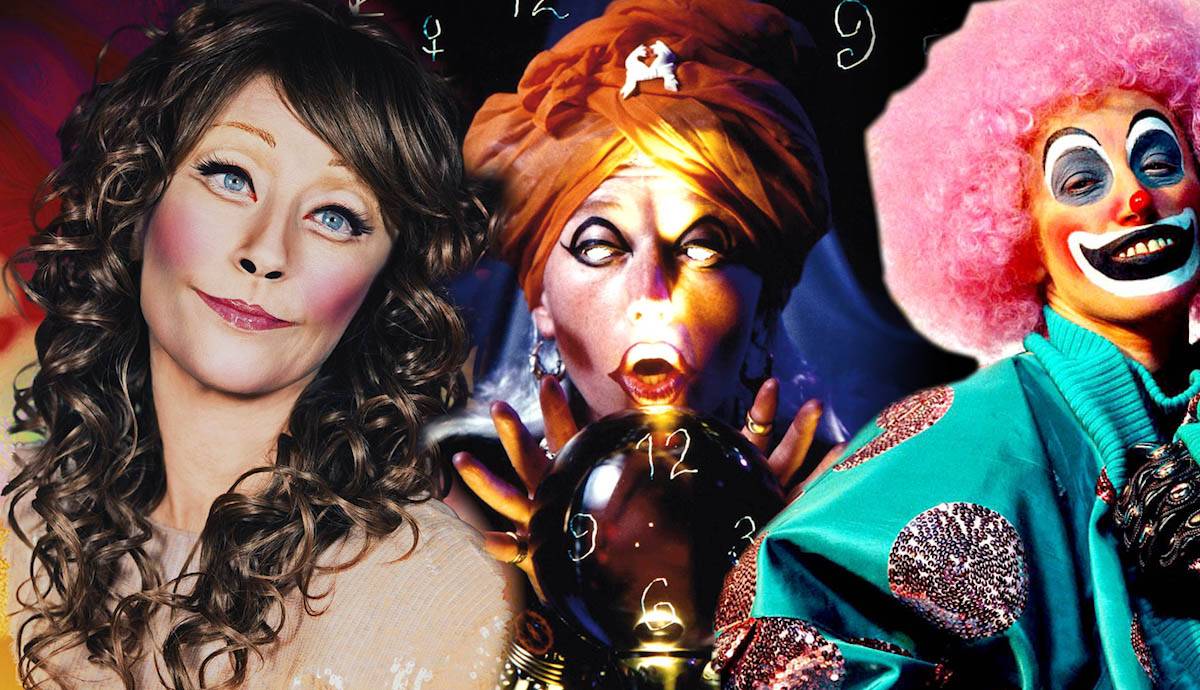 American photographer Cindy Sherman is one of contemporary art’s brightest and most influential voices, who questioned the nature of identity and self-portraiture in our media-saturated society. She shot to fame in the early 1980s as a leader in the Pictures Generation, a group that critiqued mass media with transgressive and confrontational artworks. Cindy Sherman took her own image as a starting point, using herself as a blank canvas which she could transform into a series of hyper-real archetypes lifted from movies and magazines, ranging from Hitchcock heroines to freaky clowns and Park Avenue plastic surgery mavens, often taking a wry look at society from a feminist perspective. Sherman’s characters and disguises have become more colorful, exaggerated, and grotesque as her career has developed, responding to the ever-changing face of mass media and its impact on self-image.

Cindy Sherman was born in 1954 in Glen Ridge, New Jersey. Her family later moved to Long Island, where she grew up. She was the youngest of five children and was often plagued by anxiety, but she enjoyed dressing up as an act of escape from her real self. She also loved cinema, later citing Alfred Hitchcock as one of her earliest influencers.

In the early 1970s, Sherman enrolled at the State University of New York to study painting, but she soon found the medium too limiting for her ideas, realizing, as she put it, “there was nothing more to say with the medium.” After shifting to study photography, Sherman made lifelong friendships with the artists Robert Longo and Charles Clough. Sherman found her signature approach to photographic self-portraiture while still a student, observing, “I don’t know if it was therapeutic, out of boredom, or my own fascination with thinking about make-up in the mid-seventies… I had this desire to transform myself. I would just play around and turn into a character in my bedroom.” Various cinematic influences shaped the nature of her early self-portraits, from American noir and crime movies to Italian neo-realism.

After graduating in 1976, Sherman moved to New York City to become an artist. She gradually carved a name for herself as a leading member of the Pictures Generation movement alongside artists including Barbara Kruger, Sherrie Levine, and Richard Prince – they shared a skeptical distrust of mass media and advertising, questioning its corrupt, capitalist motives with a series of frank and confrontational artworks. Sherman’s breakthrough series was the photographic project Untitled Film Stills, in which she is seen posing as a series of archetypal movie stars. Following the success of this work, Sherman continued to develop transformative self-portraiture with an ever more elaborate, disturbing, and even monstrous language, exposing the darker twists and turns of contemporary society. Let’s take a look at Cindy Sherman’s most outrageous artworks and how they have evolved through the years.

Cindy Sherman made the eerie black and white self-portrait Untitled B, 1975, as part of a larger series while still a student at the State University College of Buffalo, New York. The series was one of Sherman’s first explorations into the transformative power of make-up, costume, lighting, and photography, and the way it could morph her face into an entirely new character. In this image, Sherman transforms herself into a man by donning a cloth cap, fake eyebrows, and a maniacal grin tinged with menace and threat. Looking back, Sherman noted how the blurred edges of the photograph gave her face a loose, slippery quality, highlighting its ability to be molded and shaped like a piece of clay, noting, “I unintentionally shot them with a very narrow depth of field, leaving only certain parts of the face in focus, which gives some of the features [a] malleable quality.”

Cindy Sherman’s Untitled Film Still 25, 1978, is part of the vast series of 69 black and white self-portraits Untitled Film Stills, each featuring Sherman posing as a fictional, unknown character in a film-like scene. The series is recognized today as Sherman’s most significant early work, made when she was a young graduate in New York City. It launched her career as a leading contemporary artist in the United States. Sherman donned vintage clothing, wigs, and make-up in these images, transforming herself into a series of Hitchcockian characters seemingly caught mid-scene. In every photograph, Sherman embodied a different type of woman that might appear in a movie, from film-noir muse to prostitute, damsel in distress, and bored housewife, highlighting various persisting female stereotypes.

Cindy Sherman’s artwork Untitled #98, 1982, is part of a group of four images now known as her “Pink r]Robe” series, featuring Sherman posing under a pink chenille bathrobe. Sherman began using color photography around 1980. It immediately pushed her to explore a new style of self-portraiture that was less obscure and enigmatic than her earlier black and white work. Sherman appears without make-up or costume in this series, while the robe suggests a moment of private intimacy. Critics have suggested Sherman shows us her “real,” vulnerable self in these images, looking at us directly with an unflinching stare. However, in the entire series of four images, a subtle, fictional narrative is created where Sherman becomes increasingly hostile, defensive, and shrouded in darkness. We are reminded that a photographic image is always an act of staging, artifice, and theatricality.

In Cindy Sherman’s Untitled, 1993, she has staged herself as a fortune-teller mid-performance, lips parted and hand clasped theatrically around a crystal ball. Her face is entirely unrecognizable, transformed through grossly exaggerated make-up and costume, while her eyes are erased as if consumed by demonic white light. Sherman’s photographs from this period became more exaggerated, camp, and comical for dramatic effect, ridiculing various extreme character types from contemporary society and tinging them with an uneasy, threatening quality. Here her caricature-like portrayal exposes the fortune-teller as a ridiculous fraud who uses props and staging to lure in unsuspecting victims.

Cindy Sherman’s Untitled #414, 2003, typifies her self-portraits of the early noughties, with intensely saturated colors and inflated, exaggerated costume and make-up. This work is part of her “Clowns” series begun in 2003, which explored our complex relationship with clowns, who can embody a wide range of emotions at one time, from happiness to fear, rage, horror, and sadness. Sherman observed her fascination with the way in which, “Clowns are sad, but they’re also psychotically, hysterically happy.” In the series, Sherman transforms herself into a series of bizarre, terrifying, and tragic clown characters, using costumes, wigs, prosthetics, and make-up to titillate an extreme and sometimes complex emotional response. In her works of this period, Sherman also explored how fluorescent, digitally manipulated backgrounds can reinforce the emotional intensity of her work.

In Cindy Sherman’s self-portrait Untitled #533, 2010, she becomes a stereotypical “everywoman,” dolled up in extreme make-up and perfectly coiffed hair to resemble a plastic Barbie doll. She gazes up in an expectant and eager-to-please pose, as if desperate for admiration and recognition. The saturated backdrop behind her reinforces the sickly-sweet artificiality of the woman’s appearance and reminds us that she is a fake. Sherman made a vast series of portraits like this one featuring various women who seem to be trying too hard to look a certain way that conforms with societal expectations. In doing so, Sherman doesn’t exactly mock these women, but instead encourages us to see their vulnerability and complexity as victims of a system that celebrates certain idealized stereotypes that are far from the reality of normal life.

In Cindy Sherman’s recent work Untitled #574, 2016, she is styled as a mature woman, dressed in 1920s flapper-style clothing including a fur cloche hat and feather boa. The image is designed to resemble a nostalgic, vintage publicity shot with melodramatic gestures and a blurred, dynamic backdrop. This work was made as part of a series titled “Flappers,” in which Sherman poses as a series of fictional, aging actresses dressed in the throwback clothing of their youth, as if trying to recapture the glory days of their success. Sherman uses this series to reflect on the wider implications of aging for women in the film and television industries, who are often dismissed and ignored once they are past a certain age.

The Legacy of Cindy Sherman’s Self-Portraiture

Since the rise of her career in the 1970s, Cindy Sherman has had a phenomenal impact on the nature of contemporary art. She opened up new attitudes towards photography as a site for dramatic self-exploration and transformation. Women artists in particular have responded most favorably to the ideas opened up by her radical discourse. Scottish photographer and filmmaker Rachel Maclean is perhaps the most prominent artist to demonstrate Sherman’s influence, disguising herself as a series of fantastical characters that teeter between magical and grotesque, exploring what she calls “surface gloss and inner rot.” Others include Julia Fullerton-Batten, who creates highly detailed stills based on her personal life experiences, Jaimie Warren, who transforms her own face into ridiculous celebrity mashups, and Holly Andres, who dreams up cinematic visions of girlhood drawn from her own childhood.