HomeStoriesElizabeth I: Portraying the Virgin Queen’s Rise to Power

Symbolism in the portraits of Elizabeth I, the Virgin Queen was essential; the Tudor queen understood the power conveyed by her portraits. 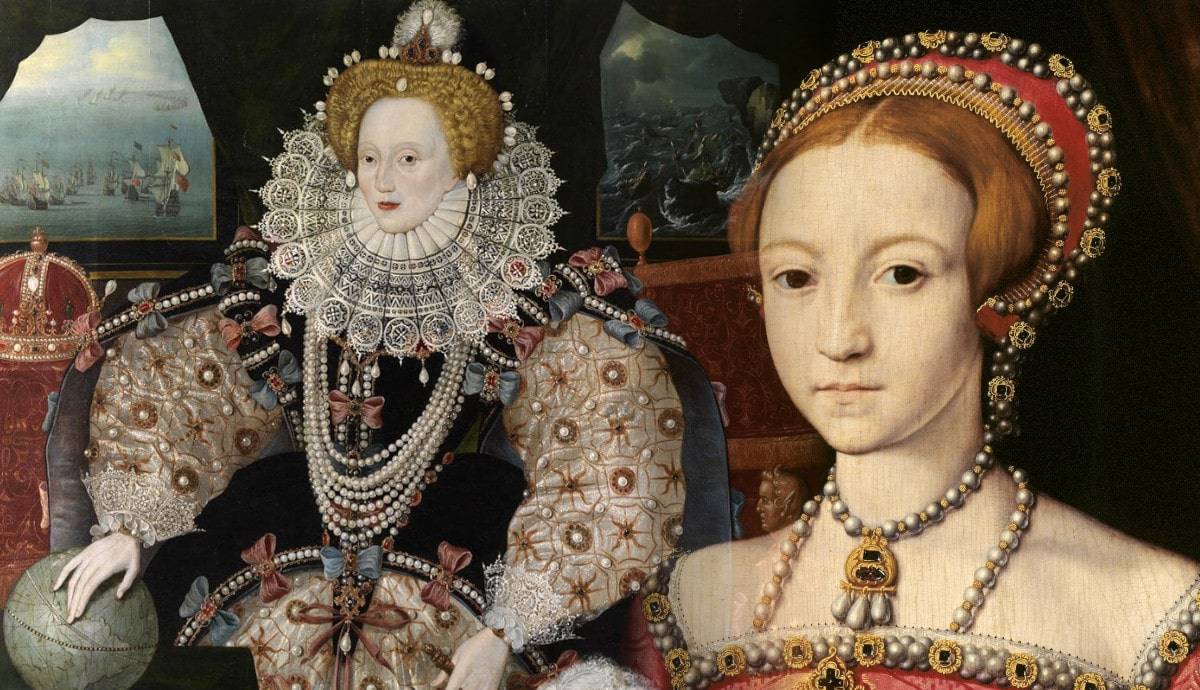 Countless portraits of Elizabeth I, Queen of England and Ireland were painted during her long reign (1558-1603). Probably more than any other ruler of her time, the queen understood the importance and power of her image. Numerous portraits were destroyed, perhaps because she was not depicted in the most favorable light. Elizabeth possessed very recognizable features. The sheen of her reddish hair stood in stark contrast with the fairness of her complexion, where no shadows darkened her features.

Portrait painters of the Tudor queen had to follow strict guidelines to please her. Elizabeth’s portraits were not supposed to reflect a true likeness but instead celebrated her eternal beauty, virtue, and power. Among the numerous paintings remaining today, many depict the queen with the same traits and expression. In fact, Queen Elizabeth I rarely engaged in portrait sitting. Once her depiction was approved, painters copied it to meet demand.

The symbolism in Elizabeth I portraits was essential. Painters used elements such as pearls, moons, globes, crowns, roses, and several animals to convey the queen’s status and power. In a world essentially ruled by men, Elizabeth had to show her legitimacy as queen.

Portraits of Queen Elizabeth I as an Illegitimate Princess

Elizabeth I was the last monarch of the House of Tudor that ruled the Kingdom of England and Ireland from 1485 to 1603. She is probably the most famous English monarch, yet she was not destined to become queen. Her mother, Anne Boleyn, was the second wife of King Henry VIII. She is mainly known for her terrible fate. Anne Boleyn wedded Henry VIII in 1533 and was executed for treason only three years later, while their daughter Elizabeth was two and a half years old.

Henry VIII had their marriage annulled, declaring Elizabeth an illegitimate child. By doing so, the King initiated the English Reformation, dividing the Church of England from the Roman Catholic Church. In 1543, the Third Succession Act reinstated Elizabeth and her half-sister Mary Tudor in the line of succession.

Elizabeth I when a Princess is the earliest surviving portrait of Queen Elizabeth. It illustrates a high-minded and knowledgeable princess aged 13 or so, not destined to be Queen of England but to form advantageous alliances by making a profitable marriage. Portraits, among other functions, served to advertise noble young girls of marriageable age in the country and abroad.

Elizabeth is wearing a richly ornate silk gown and jewelry made of gold and pearls, by all appearances a royal. Her noble figure is enhanced by the elements illustrating her wit and devotion. There are two books, one on a stand behind the princess and the other in her hands, probably alluding to the Old and the New Testaments. Elizabeth was known for her intelligent mind and propensity for learning. She could even speak and read no less than seven languages: English, Welsh, French, Italian, Spanish, Latin, and Greek.

From Illegitimate Child to Queen of England

Elizabeth succeeded Mary, daughter of Henry VIII and his first wife Catherine of Aragon, to the throne of England in 1558. The Clopton Portrait dated around her accession to the throne shows young Elizabeth as she just became queen. As a young monarch, a woman, and a formerly illegitimate child, she had to establish her authority in her subjects’ eyes, quickly. While the first portraits of the Tudor queen show simple likeness, her silhouette has already changed in the portraits painted at the beginning of her reign. Her features became more masculine, her female silhouette hidden under thick fabrics, giving an androgynous look to the queen. Elizabeth wished to establish herself as a capable ruler of the nation.

The iconography used to picture Queen Elizabeth stressed her God-given right to govern. In this case, the most visible element of her power is the ermine fur sitting on the young queen’s shoulders. A popular legend from European folklore tells that an ermine would rather die than stain its pure white hair. When chased by huntsmen, the small animal supposedly turned itself in, instead of risking staining its coat. The ermine’s immaculate fur stands for the ultimate royal emblem, as only high nobility or royalty members could wear it. Moreover, the ermine’s legend of choosing death over the loss of its fur’s purity stood for moral virtue.

Elizabeth understood the power her image could convey. Even if she never had official court painters commissioned to paint her portraits as was the custom in Europe, she carefully controlled and approved the portraits made by numerous painters.

The Hampden Portrait, attributed to a Flemish painter active at the Tudor court, Steven van der Meulen, or English painter George Gower, is the first full-length image of the queen. The queen’s figure and the elements surrounding her are skillfully detailed to show the image of a monarch in search of a suitable husband who would give her heirs and national stability. The carnation in her right hand and the abundance of flowers and fruits in the background symbolize courtship and fertility respectively. The queen was in the marriage market.

Also known as the Pelican Portrait, the painting by English goldsmith limner Nicholas pictures the queen wearing one of her favorite emblems: the pelican. The bird stood as an example of motherly love. The mother pelican would feed her blood to her children to save them from starvation. By using this symbol, Elizabeth presented herself as the tender mother of the nation, looking after her subjects.

Controlling the royal image served not only the queen’s interests but also those of the government. They used the queen’s portraits to start the cult of her image among the population. From the 1570s to the end of her reign, the devotion to Gloriana, as she was also known, helped the government to maintain public order.

Even if the queen’s entourage urged her to marry and secure an heir to the throne, Elizabeth I never did and became the legendary Virgin Queen. As an unmarried woman, the queen had to keep her virginity. It was not from a lack of suitors that Elizabeth never married. She received numerous offers of marriage but always turned them down. Her reasons are still unknown today. Her father, Henry VIII, and his six marriages certainly did not give her a good image of matrimony.

From 1579 and into the 1580s, when it became evident that the Sieve Portraits and they associate the Virgin Queen with Tuccia, a roman Vestal Virgin. Vestals were priestesses in the service of the goddess of the Earth, Vesta, who took vows of chastity. The Vestal Tuccia proved her innocence when her purity was questioned. She carried water in a sieve without losing any from the Tiber to the Temple of Vesta. In later iconography, the sieve was associated with this virtue.

In the later years of her reign, the queen’s virginity was highlighted as, without a husband and children, it made her a Mother entirely devoted to the Nation. Her chastity reinforced her political power.

Queen Elizabeth I: Portraying the Empress of the Seas

The Armada Portrait was first attributed to George Gower, “Serjeant Painter” to Queen Elizabeth I from 1581. Yet, experts have now established that it was not a portrait from Gower’s hand. Its author remains unknown. In fact, three versions of the Armada portrait exist and are attributed to several unknown artists.

The Armada portrait celebrated the queen’s victory over the Spanish Armada in 1588. The Spanish Armada was the name given to the Spanish fleet, chartered by Catholic King Philip II of Spain to overthrow the protestant queen. During Summer 1588, the Spanish and English faced each other in the Channel. Outnumbered by the powerful Spanish fleet, the English set fire to some of their ships, letting them drift towards the armada. No damage was done. Still, this action instilled fear in the Spanish soldiers, forcing them to flee. English tenacity forced the ships of one of the most powerful nations in Europe to retreat, even if no Spanish ship sank during the Battle of Gravelines. However, a storm hit the retreating Spanish fleet, and 20 out of 130 ships were lost.

In the end, even if the English defeated the Spanish Armada, their victory was not as significant as the queen implied. Yet, the Armada portrait is a remarkable demonstration of a well-thought-out propaganda program. The symbols of power overtake the realism of the scene.

Both of the window views have no spatial or temporal connection. Several weeks separate the two scenes. The English ships face the Spanish Armada on the left side, while on the right side, the fleeing Spanish fleet is caught in a devastating storm.

The queen was around 56 years old at the time. The wig she was wearing and the white powder on her face served to give the impression of eternal youth and beauty. The queen holds a precious fan with ostrich feathers instead of the usual royalty symbols, the orb, and scepter. Her other hand rests on a globe, her fingers over the Americas, clearly showing her claim to territories beyond the Kingdom of England and Ireland.

At the time, ruling the seas meant ruling the world. Numerous pearls ornament the queen’s dress and wig. Pearls were precious, coming from the depths of the sea, and a symbol of virginity. They conveyed her status as ruler of the seas, even if the queen’s fleet, composed of essentially private ships rented for the offensive, were discharged soon after the Spanish retreat.

The Armada portrait is a brilliant celebration of the queen’s sovereignty. Queen Elizabeth was fully aware of the importance of conveying an image of power. Her propaganda portraits helped establish her as a legitimate queen, ruling England as any male monarch would have done — and even surpassing them.

11 Most Expensive Jewelry Auction Results in the last 10 Years