HomePhilosophyEpicurus’ Philosophy: The Pursuit of Pleasure as a Moral Imperative

The Greek philosopher Epicurus taught that pleasure was the highest good. He believed that by removing anxiety and enjoying life’s simple pleasures we could be happy. 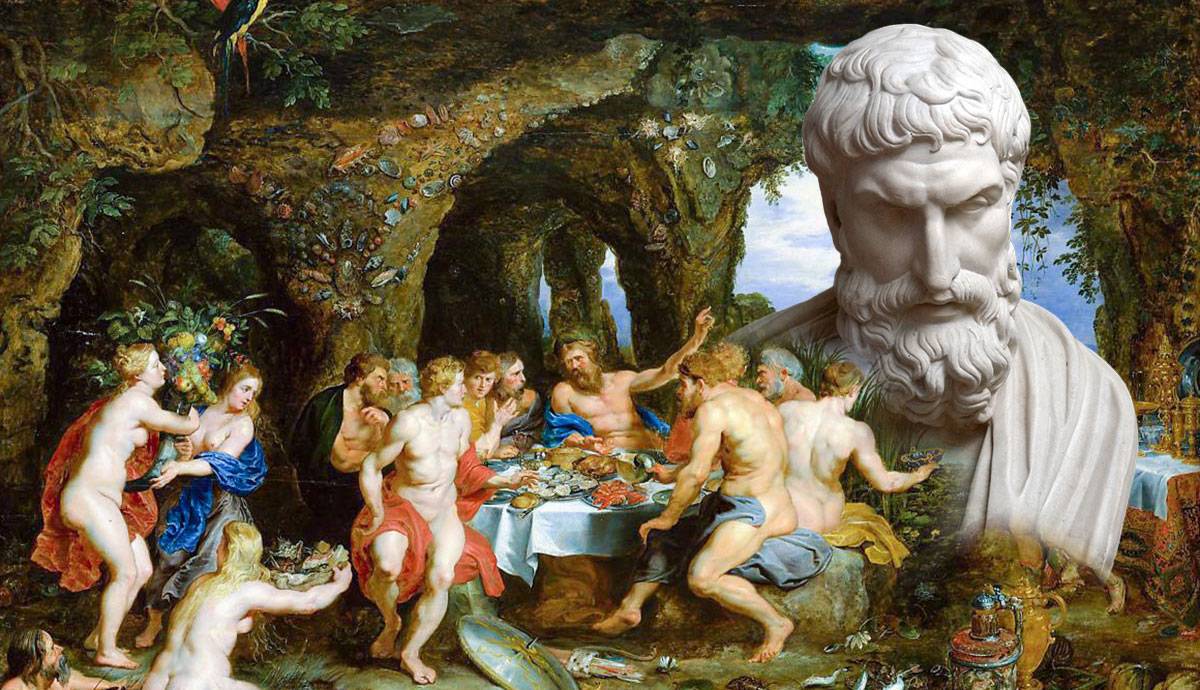 When you think of something pleasurable, what do you think of? Do you think of eating a perfectly cooked slice of beef or perhaps a sugary treat from the bakery? The word ‘epicurean’ is often associated with food, but it suggests something more sensual, more luxurious, and more pleasurable. The word is derived from the Ancient Greek philosopher Epicurus, who became both renowned and infamous as the philosopher of pleasure. He taught that the good life consisted in pursuing pleasure and reducing pain, an idea that sounds both obvious and hedonistic. While his conclusions may be far less titillating than you might think, a question remains: can pursuing pleasure be a morally good thing to do?

The Early Life of Epicurus

Epicurus was born in 341 BC, towards the end of what is now marked as the Classical Era in Greek history. He lived in relative poverty on the island of Samos where his father worked as a schoolteacher, a profession that wasn’t paid well nor was well respected. The island is off the coast of modern Turkey, but Epicurus’s family were colonists from Athens. At the age of eighteen Epicurus set off for Athens to establish his citizenship, around roughly the same time as Alexander the Great died. The resulting upheaval in the Greek world was probably the impetus behind the Athenian colonists of Samos being forced out by the local population.

Epicurus had taken to the study of philosophy around the age of fourteen and when he reunited with his family, who had now become refugees in Asia Minor, he took to establishing his own philosophy school in two places along the coast of Turkey before returning to Athens to set up his school around 307 B.C. He lived and taught in Athens for the rest of his life and died there in around 271 BC at the age of 70 as one of the most famous philosophers of his era.

The Development of Epicurus’ Philosophy

Little is known about how Epicurus learnt philosophy or which experiences led him to his conclusions. In the year after he returned to his family, he is thought to have studied with a man named Nausiphanes, who was himself a student of the philosopher Democritus. Although parts of Epicurus’s philosophy owe a lot to Democritus’s ideas, particularly his belief that the world was made up of atoms, Epicurus was disparaging of his former teacher, referring to him as “The Mollusc.”

In fact, Epicurus was dismissive of the work of many other philosophers, including Socrates and Plato, partly because he saw philosophy as a practical system for achieving a happy life, not as a way to investigate abstract ideas of logic and mathematics. His contempt for other philosophers might be part of the reason why he was so vehemently attacked by his contemporaries, the Stoics of Athens.

As was typical of philosophers of the time Epicurus started his school by teaching in the public squares of Athens. However, it was a competitive and contemptuous business. After a number of bruising altercations, Epicurus changed his way of teaching. He moved into a house far removed from the busy centre of Athens and instead of teaching in public he began to teach in his garden. This enabled him to practice what he preached, leading the kind of life he advocated in his teachings. It was far removed from the debauched life of overindulgence in wine and carnality that the gossipers claimed it to be.

What is it that Truly Makes People Happy?

Many philosophers before and since Epicurus have occupied themselves with trying to understand what the Good is, or what Justice is, but Epicurus was moved by the misery and fear of the people around him, and instead focused solely on what makes people happy. He was essentially a humanist, and his aim was to find a solution to the misery he saw. This led him to contemplate the continuum of pleasure and pain. Clearly, it was obvious that people would be happier with less pain and more pleasure in their lives, but simply increasing the number of pleasurable experiences wasn’t the answer. Not least because indulging in pleasure in the hedonistic sense came with less than pleasurable side effects.

“No pleasure is a bad thing in itself. But the things that make for pleasure in certain cases entail disturbances many times greater than the pleasures themselves.”

Drinking alcohol is pleasurable, and Epicurus was known to drink a glass of wine, but drinking alcohol to excess, as everybody well knows, has unpleasant consequences. The morning after is usually accompanied by some serious discomfort. The same is true of gorging yourself on rich, delicious food. It excites the senses at the time, but then comes the stomach-ache and possibly, in the long run, ill health. Epicurus’s point was that certain pleasures produced consequences that were far worse than the original pleasure was good. The solution to making people happier was more about removing the sources of pain, not indulging in sensual pleasures for momentary satisfaction.

“The quantitative limit of pleasure is the elimination of all feelings of pain. Wherever the pleasurable state exists, there is neither bodily pain nor mental pain…”

Removing the Source of Anxiety

What Epicurus was after was freedom from anxiety (ataraxia in Greek), and a life that was tranquil. His philosophy was not the self-centred affront to conventional morality that his detractors assumed. Rather, it focused on the simple pleasures of life that made people happier in the long term and, perhaps ironically, resulted in someone being moral and virtuous almost as a side effect. Epicurus sought to identify the main sources of distress and remove them, mostly through philosophising and coming to sensible conclusions about what we really need.

Epicurus thought one primary source of anxiety, as it is for many people these days too, was work. Working was what you had to do to earn money even if it was mundane and meaningless, and made miserable by intolerable co-workers or bosses. Even this ignores the additional stress of climbing the corporate ladder to improve one’s social status. Not only did this cause people to lose sight of what was really valuable in life and even our own self-worth, but the pleasure of the pay-check wasn’t worth the unhappiness brought by the work itself.

Epicurus’s solution was twofold. First, we should give up working for other people and work for ourselves, alone or with friends, on something that is meaningful to us. Second, we should aim to be as self-sufficient as possible so that we don’t have to rely on outside sources for the money needed to live. In practice, Epicurus and his followers worked in the garden of their house and sold what they grew as a source of income at the same time as feeding themselves.

This connects to another source of anxiety Epicurus identified, which was not having enough money. The Athens of the early Hellenic world was one of the major cities of Alexander the Great’s empire and a major trading port. The shops and markets were full of every conceivable delight, from freshly cooked delicacies to scented oils and coloured silks. Athens was full of wealth and luxury. If you didn’t have enough money, Athens was probably a pretty miserable place to be.

Epicurus saw that wealth and luxury didn’t make people happy either. Much like now, people just chased more without really thinking about what they needed, thus falling into the trap of trying to keep up with the Athenian Jones’s. The constant feeling of lacking and the need to pursue greater wealth was a source of anxiety. Epicurus solved this by living a life of frugality and escaping the consumerist rat race. The self-sufficiency that Epicurus and his friends had meant they had all they needed. They had enough. Epicurus himself was said to have only two cloaks, something far from decadent.

“Some desires are natural and necessary, others natural but not necessary; and still others are neither natural nor necessary but generated by senseless whims.”

Friendship as the Source of Lasting Pleasure

A further cause of anxiety was the pursuit of romantic love and pleasures of the flesh. Epicurus thought that, although natural, they should be avoided where possible since they tended to bring with them negative feelings of jealousy, anger and depression at being jilted, as well as a fair bit of madness. Despite the rumours that he was living with a host of courtesans, Epicurus seems to largely have been celibate and had no children of his own. What he preferred was the company of good friends.

Friendship seems to have been regarded by Epicurus as the greatest pleasure in life. Understanding that man is a social animal, Epicurus thought that developing friendships was the key to being happy and an essential part of a good life. It was a pleasure but one with few negative consequences, and this was partly why Epicurus took upon the idea of communal living.

“Of all things that wisdom provides for the happiness of the whole man, by far the most important is the acquisition of friendship.”

Epicurus shared the house he moved into outside Athens with a number of close friends and their families. They lived, ate and worked together. Friends weren’t merely useful thanks to their providing the necessary consolation during life’s trials, but it was through friendships and meaningful relationships that we could come to be accepted, understood and valued. Friendship also provided the conversation that was essential for philosophising and gaining wisdom.

Epicurus’s Moral Philosophy and the Pursuit of Pleasure

The conclusion that Epicurus came to was that through the pleasant life, the balanced life without overindulgence, we end up becoming wise and just. For Epicurus, being happy meant living a life free from anxiety. You couldn’t do that if you didn’t live in harmony, free of pretence, selfishness, and jealousy from those around you. By treating each other fairly and with respect, the pursuit of pleasure, in this sense, led to being morally good.

“It is impossible to live a pleasant life without also living sensibly, nobly and justly…”

In the philosophy of Epicurus, pleasure isn’t derived from indulgence in the luxurious or the sensual, but from removing anxiety and focusing on the simple pleasures of life such as friendship. In this way Epicurus equated his ideal of pleasure with the Good itself. The irony perhaps is that contrary to his detractors’ criticisms of indulgence and immorality, pursuing pleasure actually leads to being moral. In Epicurus’s philosophy, focusing on what truly makes us happy and eschewing the mirage of happiness presented by society at large, results in us being good people too. After all, it is quite hard to be good if you’re not happy.