HomePhilosophyAn In-depth Understanding on the Four Virtues of Stoicism

An In-depth Understanding on the Four Virtues of Stoicism

The Four Virtues of Stoicism – wisdom, temperance, justice, courage – were an ethical system based on Socratic ideals in Imperial Rome. 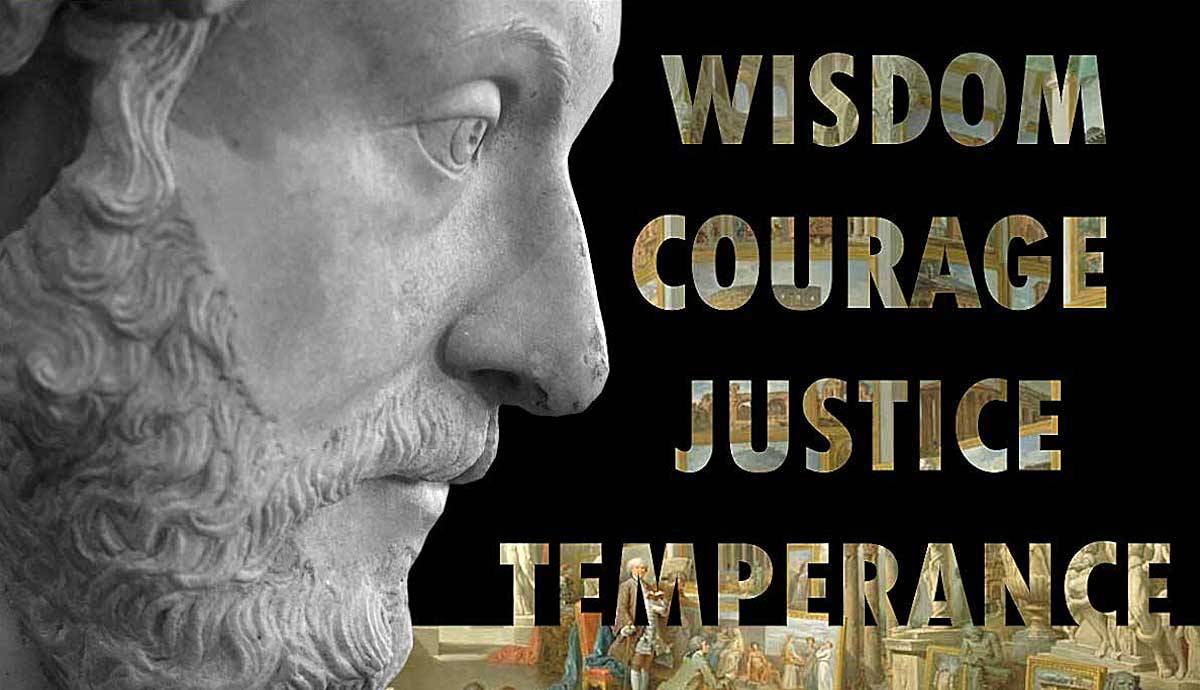 Questions of the best way to live have been around for at least as long as humans have lived in settled societies. Before that, there was little need or time to think about it. But as civilizations grew into empires more and more people found they had the time and the need to think about how to live well. The Romans were no different. They absorbed a lot of Greek and Hellenistic culture, and while they were not nearly as philosophically minded as the Greeks were in their Athenian heyday, there was one particular philosophy that flourished in Rome – Stoicism. Such was its influence that it scaled the heights of power impacting a Roman Emperor himself and it is partly through his writing that we know so much about Stoicism today. At the core of Roman Stoicism was an ethical system based on the four cardinal virtues that reached back to the Greek philosophical traditions and to Socrates.

The Origins of the Four Virtues of Stoicism

The Stoics, as they became known, got their name from the Stoa, a covered public walkway or portico, where the followers of Zeno of Citium met to discuss philosophy in 3rd Century BC Athens. Stoicism started around the same time as their great rivals the Epicureans did in Hellenistic Greece. In fact, some of the slanderous accusations of the immorality of Epicurus and his followers can be attributed to the Stoics (these disagreements and misunderstandings are still common, if less libelous, between the Stoics and Epicureans of today).

While Zeno of Citium established the principle doctrines of Stoicism, it was the later leader Chrysippus who put the philosophy on firmer foundations. So important was he to the development of Stoic ideas, that it was said that without him there would have been no Stoicism. He was a prolific writer who wrote on subjects ranging from logic, for which he was particularly renowned, to physics to ethics. Sadly, his works have all been lost, except in fragments quoted by later writers.

Over the next two centuries, as Roman influence grew, Stoicism was gradually transplanted to Rome. One leading Stoic, Posidonius, became friends with the Roman politician and philosopher Cicero and while Cicero can’t be considered a Stoic, he did understand, discuss, and propagate many Stoic ideas. It is mainly through the trio of Romans, Seneca the Younger, Marcus Aurelius and Epictetus, that most people have come to know Stoicism and particularly its ethics.

Ethics and the Four Virtues of Stoicism

When Stoicism began it was, like Epicureanism, a complete philosophical system that incorporated many theoretical elements including metaphysics, cosmology, and logic. But as Stoicism rose in popularity in Rome during the transition from Republic to Empire it was the practical ethics that became prominent and important. Stoic ethics does have a grounding in a metaphysical rationality, but that needn’t concern us at this point and can be understood without it.

Following Socrates and Aristotle, the Stoics were interested in eudaimonia – a life worth living or a flourishing life. They saw themselves as following Socratic ideals and where virtue was concerned struck a compromise between an Aristotelian concept of virtue that was too elitist and a Cynic concept of virtue that was extremely minimalist. This compromise took the four cardinal virtues from Socrates – wisdom, courage, temperance, and justice – and while maintaining that these were the only true good and thus sufficient for eudaimonia, other externalities such as material comfort could rationally be preferred as long as they were not coveted.

For the late Stoics, Seneca, Epictetus and Marcus Aurelius, the point of philosophy was the application of the four virtues of Stoicism in practical ethics – it was a study of how to best live life. Interestingly, Stoic ethics has its roots in a naturalistic idea of human nature that is compatible with modern evolutionary psychology and cognitive science. The Stoics believed that humans are social animals that are able to use reason to solve problems and that this instinct naturally developed throughout life beginning in childhood and was the basis of ethics. This could be analyzed in three parts:

First, we behave to advance our self-interest. Second, we recognize other people also have interests. Third, we work out how to solve the problems in life that arise from the friction between the first two principles.

To achieve this, we have to apply the four cardinal virtues. We need temperance and courage to pursue our own interests. We need justice out of concern for other people’s interests and finally, we need wisdom to deal with the inevitable conflicts. And although these are discreet virtues, they are also unified. As we shall see, it is difficult to have one virtue and not the others. But first, let’s have a deeper look at each of the individual virtues.

The great Stoic and Roman senator Seneca the younger was the tutor and advisor to the volatile Emperor Nero. While initially able to influence Nero, as the emperor became more erratic and paranoid Seneca was forced into exile and eventually had to commit suicide on Nero’s orders. Seneca’s courage to face his fate with dignity is a paradigmatic example of Stoic ethics in action. He didn’t complain or try to escape, as he certainly had the means to do, but had the courage to accept reality, not in a dissimilar way to what Socrates had done.

For the Stoics, courage is the ability to stand up to whatever challenges life throws at you without losing your principles, as Seneca did. Regardless of the risk, doing what you believe is right, speaking your mind and insisting on truth, all characterize a person with courage. But having courage also entailed perseverance, persistence and confidence among other sub-virtues that helped people live well.

“Think of yourself as dead. You have lived your life. Now take what is left and live it properly.”
Marcus Aurelius, The Meditations.

Temperance can be a difficult word and virtue to understand for modern readers. In one sense it means moderation, but probably what it is closest to is self-discipline or self-control. For the Stoics, temperance and self-control were synonymous.

In Aristotelian ethics moderation is the Gold Mean, the sweet spot between two vices. The Stoics followed this idea, especially as they were wary of excess and desire believing that they led to discontent and discomfort. Two things that are not part of a well-lived life. For Epictetus, it meant restraining your desires, and for Seneca, it meant knowing what is essential and what is enough.

But perhaps the most important aspect of temperance was again about how to act in problematic or difficult situations. Primarily this meant the ability to keep the emotions under control and act rightly regardless of what else was happening. It is this calmness, this unflappability, that inspired the pejorative idea of “being stoic”, meaning emotionless. But for Stoics, it meant protecting themselves from extremes, avoiding impulsiveness and rashness, and being guided by reason rather than emotion.

“He is a wise man who does not grieve for the things which he has not, but rejoices for those that which he has.”
Epictetus, The Discourses.

There is an argument between Stoics about which is the most important virtue. For Marcus Aurelius it was justice. Cicero too argued that justice was the source of all the other virtues. And neither was thinking of legal justice. Justice was wider than that. It was about how to act well in relation to other people, the interactions, and the obligations of being a social animal. In many ways, the Stoic concept of justice has some parallels with the Confucian concept of benevolence.

Stemming from their metaphysical beliefs about the way the universe was organized, the Stoics believed that everything was mutually interdependent. They called this connectedness “Sympatheia”. It meant that justice extended beyond the individual and their immediate problems and relations to a wider view of justice in the world at large.

For Cicero, justice required generosity – sharing and charity were important. You couldn’t be a Stoic and be self-centered. The welfare and prosperity of other people, even those far removed from you should also influence how you think and act in living rightly and therefore was at the core of justice.

“The good of the people is the chief law.” – Cicero, Da Legibus

It is perhaps wisdom though, that stands out as the virtue around which all the other cardinal virtues revolve. Like Aristotle, the Stoics were concerned with applying virtue in real life, and without wisdom that was difficult. Practical wisdom meant using philosophy to understand how to act and respond in all situations, good and bad.

A key concept in Stoicism, even the most important, was understanding what was within your control and what was not, which is sometimes called the logos of control. This boils down to how you respond because really that is the only thing you can control. The Stoics were at pains to explain that nothing is necessarily good or bad, it is our responses that make it so. There is always a gap between the outside stimulus and our internal response to it. And in that gap, we always have the freedom to choose and the power to act.

For the Stoics, wisdom begins with differentiating between things we can control and things we can’t, between what is truly important and what isn’t, between the knowing benefits that only the virtues can bring and the perils of being attached to externalities – wealth, health, status and alike.

“In life our first job is this, to divide and distinguish things into two categories: externals we cannot control, … the choices I make with regard to them I do control.”
Epictetus, The Discourses.

The Unity of the Four Virtues of Stoicism

The four virtues of Stoicism were the only things required for a flourishing life, they were necessary and sufficient. The Stoics believed that everything valuable in life followed from living with virtue, particularly happiness and love. Moreover, the development of virtue could bring about a change in a person’s emotional life, moving them from bad, irrational emotions based on a lack of wisdom, to good emotions based on an understanding of virtue. In short, the Stoics thought that the four virtues of Stoicism would make them better people, improve their lives and help them live well. It is quite possible they can do the same for us two thousand years later.

“Waste no more time arguing what a good man should be. Be one.”
Marcus Aurelius, Mediations