HomePhilosophySocrates’ Philosophy: The Ancient Greek Philosopher and His Legacy

Socrates’ philosophy had a profound effect on western thought; the Ancient Greek philosopher spent his life examining the meaning of virtue. 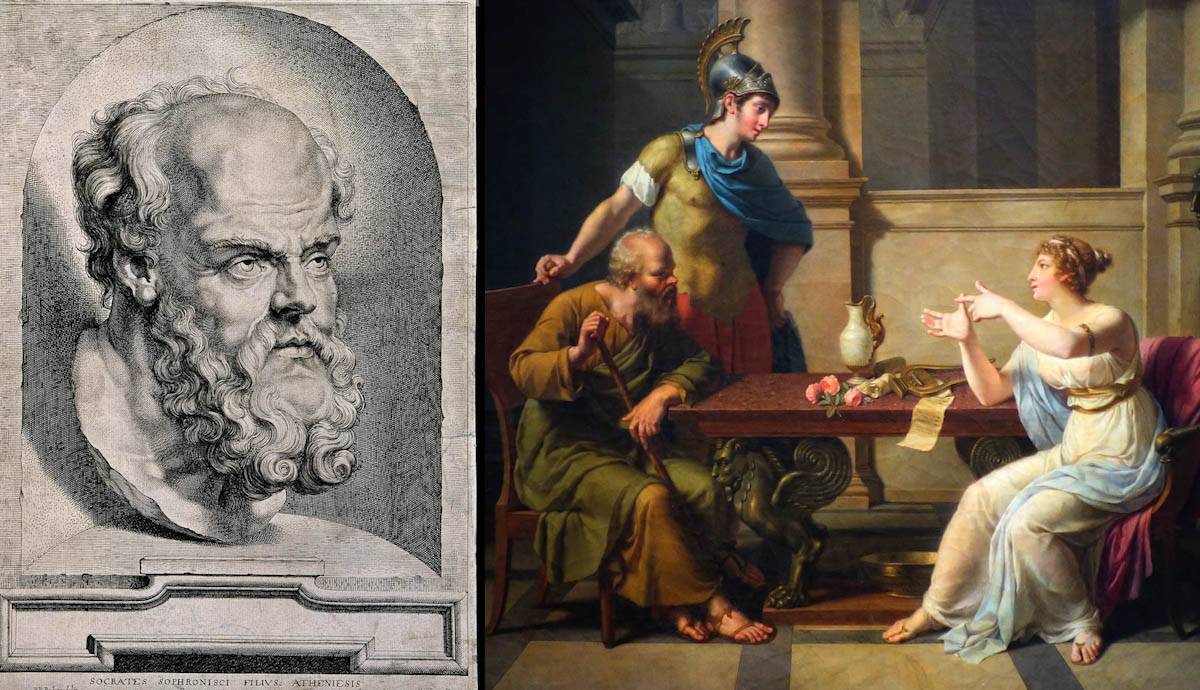 Getting a straight answer from the philosopher Socrates was almost impossible. When asked by a wealthy young man, “Is being good something that can be taught?” Socrates replied, “Far from whether it is teachable, I haven’t the faintest idea of what being good is.” Instead of answering, they investigate the problem together. Socrates questions, the young man answers, the discussion moving round and round until finally, they reach a conclusion. But with one final salvo from Socrates, the conclusion crumbles and they are back where they started. As the bewildered young man leaves, Socrates says, “Go tell what you have learned.” According to Socrates’ philosophy, it is in examining life that you learn something, not in reaching an answer.

The Importance of Socrates’ Philosophy

Socrates and his method of examining life had such an impact on philosophy that philosophy is divided into what came before him and what came after. The philosophers that came before him are termed the pre-Socratics for precisely this reason, and although we don’t call the philosophers that came after him post-Socratics, it has been said that “all philosophy is a footnote to Plato.” And Plato was Socrates’ most revered pupil and the primary disseminator of Socrates’ philosophy.

Socrates himself never wrote anything, and in Plato’s writing, where he uses Socrates as the main character in his dialogues, it can be difficult to tell how much is the historical Socrates and how much is Plato. Nonetheless we can get an idea of what Socrates was like. In Meno, one such Platonic dialogue alluded to above, Socrates and the title character sit down to discuss what it means to be good. The discussion is lively, and together they arrive at two competing conceptions of what good is, without ever reaching a definite conclusion. This is typical Socrates, always questioning, often ironic, and never settling for the easy answer.

The Death of Socrates and Athenian Politics

What we do know about the historical Socrates is that he was born in 469 B.C.E. and condemned to death at the age of seventy in 399. He was a citizen of Athens and practiced philosophy for his entire life, except for a brief excursion abroad with the Athenian military. At age seventy he was tried and found guilty by his fellow Athenians for impiety to the state gods, introducing new gods, and corrupting the youth. Although the charges weren’t completely spurious, they likely belied the real motivations for Socrates’ trial.

At the time of the trial, Athens had only just recovered its democracy. Some years earlier Athens had lost the brutal Peloponnesian War to the Spartans. The Spartans installed an authoritarian government that came to be known as the Thirty Tyrants, under whose rule there was considerable bloodletting. Unfortunately for Socrates, the leader of the tyrants, a man named Critias, and at least one other member, were formerly his students. Additionally, another former student, Alcibiades, had at some point defected to the Spartans. From a political perspective, Socrates was tainted by these undemocratic associations, and while he couldn’t be prosecuted directly due to an amnesty, it seems likely his accusers used his trial to prosecute him for his political connections.

The Development of Reasoned Argument in Socrates’ Philosophy

As democracy developed in Athens, so did the need for persuasive argument. This resulted in a veritable industry within education taught by people called Sophists. They taught rhetoric, oratory, and logical argument for a price. The Sophists came in for much criticism. It was considered uncouth in Athenian society to pay for education, and today the phrase “mere sophistry” is indeed still used pejoratively for arguments lacking in substance.

Socrates criticized what the Sophists did and often engaged them in debate. But Socrates himself was arguably a sophist too; he followed in that tradition, except that he didn’t charge for what he taught and was more interested in uncovering genuine knowledge than simply teaching logical argumentation. Although he was undoubtedly a master of that art.

By all accounts, Socrates was a witty, ironic, eloquent speaker, one who had cutting insight and thought incredibly deeply. As the story goes, the Delphic Oracle, who the Greeks believed spoke directly for the gods, said that Socrates was the wisest man alive. This was something that Socrates’ initially found hard to believe. He set out to test whether it was true by questioning all the people he thought were wise or knowledgeable and engaging them in discussion. He came away disappointed — each professed their own wisdom, yet none of them seemed to know what they were talking about. Socrates concluded that he wasn’t the wisest man alive because he knew a lot, but because he knew that he knew nothing.

The Socratic Method of Philosophy

Although the story above is not quite true, Socrates’ humility goes some way to explain why he was so successful and influential as a thinker. Starting from a place of ignorance allowed him to question his own assumptions and those of others. His claims of ignorance also helped to disarm his interlocutors. As was suggested above, Socrates proceeded in his investigations by asking questions of his conversation partner until he was able to find some logical inconsistency or paradox that disproved their answers. This dialectic method is at the centre of Socrates’ philosophy and has since become known as the Socratic Method, which, although made famous by Socrates, is believed to have begun with Zeno, a student of Parmenides.

The dialectic method is also well-suited to the literary dialogues in which Socrates’ conversations are presented. The earlier Platonic dialogues are thought to best reflect Socrates’ philosophy and each dialogue typically finds Socrates asking questions and examining different kinds of virtue. In Charmides, Socrates discusses temperance and self-control, in Crito, justice, and in Symposium, love. The curious thing is that Socrates rarely reaches any firm conclusions, although he and his companions are wiser than they were prior to the conversation.

The Defence of a Great Philosopher

It is difficult to piece together the real Socrates. Most of what we know about him comes from Plato. The later Platonic dialogues are not an accurate depiction of Socrates’ philosophy, since in them Socrates has become a mouthpiece for Plato’s own ideas. Plato was at the trial of Socrates, and his first dialogue, the Apology, might be a fairly accurate account of Socrates’ arguments. But Plato was also a literary genius; he didn’t simply document what Socrates said but turned it into a highly readable, informative, and thought-provoking defence of the great philosopher.

Another source of information about Socrates was the historian Xenophon. He had also been a student of Socrates at some point and was eager to defend his former teacher in his writings. Doubts persist as to whether he could have been at Socrates’ trial as he was apparently in exile from Athens at the time and, moreover, he lacked the literary flair and philosophical wit of Plato. Nonetheless, his memoirs provide another perspective on Socrates’ philosophy and there are points of agreement between his writings and Plato’s. However, it is believed that Plato’s account of Socrates is more accurate, something that was confirmed and moderated by Aristotle.

Socrates was a moral philosopher. He was not interested in mathematics or science but was concerned with the quality of his soul and that of others. Socrates’ philosophy examines how we should live. This led him to discussions on various virtues, things like wisdom, justice, courage, piety, and so on. Socrates saw his mission as one of correcting false beliefs. He taught that people should care less about their bodies and possessions and more about their souls, saying, “wealth does not bring goodness, but goodness brings wealth.” As such he believed he was serving the city of Athens and its citizens by highlighting their incorrect thinking.

Socrates was a man of principle. He lived according to what he believed. He was not interested in material possessions or physical beauty – he was well known to be poor and ugly — and he took no money for his teaching as the Sophists did. He dedicated his whole life to understanding the virtues so that he could be more virtuous and educate others on how to be virtuous too, which he thought led to true happiness. He was uncompromising in his beliefs about the right way to live, which is part of the reason why he ended up being condemned to death.

The Legacy of Socrates’ Philosophy

What is Socrates’ legacy? He is often called the “first” philosopher, not in the sense that he came first, but in the sense that he is top of the pile. Yet in some ways, he was more of a sage than a philosopher. He can be compared with Buddha, who died ten years before Socrates was born. Both led a life of contemplation and investigation into how to live, and both gathered many followers who later spread their teachings. But whereas Buddha founded a purely spiritual practice, Socrates inspired a method of using reason to uncover truths about life, or at the very least, highlight where our thinking is deficient, a method that is at the heart of western philosophy.

The legacy of Socrates was helped in no small part by dying a martyr’s death and by having Plato as a student. Even though Socrates could have escaped the charges against him, he wouldn’t have compromised his beliefs. It was this courage that gave an added integrity and weight to his teachings, beyond his wit and wisdom. Plato was inspired by what he saw and heard in Socrates’ philosophy, and his writings immortalized Socrates to such an extent that he profoundly shaped western cultural and intellectual history.

But why did Socrates never reach any conclusions? The main point of Socrates’ philosophy can be glimpsed in what he says to Meno at the close of their conversation: “And as for you, go and tell others what you yourself have been convinced of.” It is this call to investigate what it means to live, think for yourself, and not expect any simple answers, that is Socrates’ greatest legacy, and it is one that has inspired all philosophers since.