‘Know Thyself’ is a popular philosophical dictum. This article explores how Socrates popularized the saying, and how later thinkers like Montaigne interpreted it. 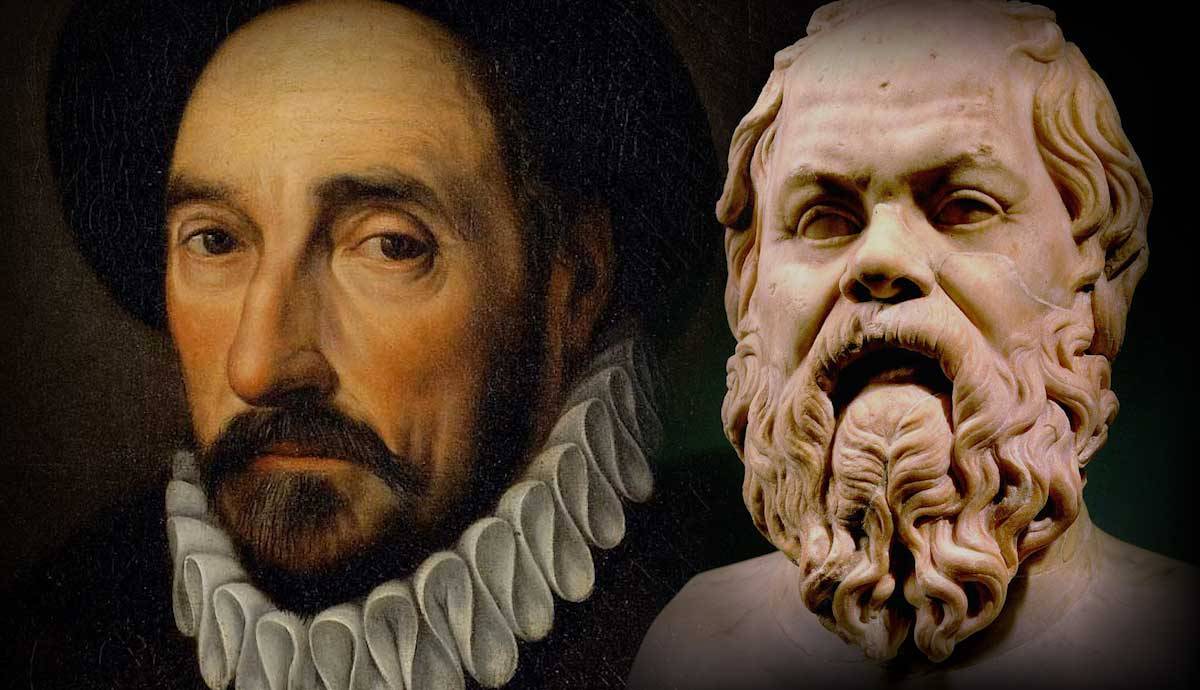 In ancient Delphi, the phrase ‘Know Thyself’ was one of several philosophical sayings allegedly carved over the entrance to the Temple of Apollo. These phrases came to be known as the ‘Delphic maxims’. Clearly ‘Know Thyself’ was influential enough in ancient Greek society to feature so prominently at one of its most revered holy sites. It would later be referenced over a thousand years later by Montaigne in his celebrated Essays. So where did the maxim actually come from?

While many people assume that Socrates invented ‘Know Thyself’, the phrase has been attributed to a vast number of ancient Greek thinkers, from Heraclitus to Pythagoras. In fact, historians are unsure of where exactly it came from. Even dating the phrase’s appearance at Delphi is tricky. One temple of Apollo at Delphi burnt down in 548 BC, and was replaced with a new building and facade in the latter half of the sixth century. Many academics date the inscription to this time period. Christopher Moore believes that the most likely period of its appearance at the temple is between 525 and 450 BC, since this is when “Delphi would have been asserting itself as a center of wisdom” (Moore, 2015).

The fact that we’ve struggled to establish the origins of ‘Know Thyself’ has two major consequences for Socrates’ use of the phrase. First, we’ll never be able to say with certainty how Socrates was reinterpreting the earlier Delphic maxim (since we have no idea when or why it appeared!). Second, we do know that the maxim was hugely important within ancient Greek philosophical circles. Its prominent location at Delphi, home of the famous oracle, means we have to take it seriously.

Nevertheless, scholars have interpreted Socrates’ interest in self-knowledge in very different ways. Some academics are dismissive of its value altogether, believing that the ancients held true self-knowledge to be impossible. The soul is the self, and the self is always changing, so how is it possible to ever really ‘know’ oneself? Others claim that the saying is peripheral to Socrates’ wider philosophy.

Not everyone agrees. Various scholars have sought to illustrate how important self-knowledge is to Socrates’ philosophical project. Academics such as M. M. McCabe have argued that Socratic self-knowledge involves a deep examination of one’s principles and beliefs. We must judge ourselves honestly and openly in order to see where we might be flawed in our views. ‘Know thyself’ requires “the courage to persevere, to acknowledge failure, to live with the knowledge of one’s own ignorance” (McCabe, 2011). This is where we begin to see how self-knowledge, when done correctly, can become a tool for self-improvement.

Self-Knowledge: What Are We Actually “Knowing”?

We’ve already seen the word ‘self’ several times in this article. But what does it actually mean? As Christopher Moore points out, “the severe challenge in ancient philosophy is to identify the “self” of self-knowledge” (Moore, 2015). Is a self something universal that everyone possesses? And is it therefore an entity which can be discovered? Or is it something that doesn’t preexist an effort to know it i.e., does it need to be constructed rather than found?

According to Socrates, self-knowledge was a continuous practice of discovery. In Plato’s dialogues, for example, Socrates is portrayed as being dismissive of people who are interested in trying to rationalize things like mythology: “I am not yet able, as the Delphic inscription has it, to know myself; so it seems to me ridiculous, when I do not yet know that, to investigate irrelevant things”.

The self, according to Socrates, is best thought of as a ‘selfhood’ consisting of beliefs and desires, which in turn drive our actions. And in order to know what we believe, we first have to know what is true. Then we can reassess our preconceptions on a given topic once we have established the truth. Of course, this is much easier to say than to actually do! Hence why self-knowledge is portrayed as a continuous practice.

Self-Knowledge and the Importance of Conversation

Socrates was well-known for his love of conversation. He enjoyed asking questions of other people, whether they were philosophers or senators or merchants. Being able to answer a question, and also offering a coherent explanation for one’s answer, is an important component of self-knowledge. Socrates liked to test people’s beliefs, and in doing so try to establish truth about a particular topic.

Sometimes we confuse how certain we are of our opinions with whether they are actually true or not. Socrates pursued conversation because it helps to question why we believe certain things. If we don’t have a good answer to why we are fighting against climate change, for instance, then how can we continue to hold this as a principle? As Moore writes, “Being properly a self involves meaning what one says, understanding how it differs from the other things one could say, and taking seriously its consequences for oneself and one’s conversations” (Moore, 2015). We have to be able to account for our views on the world without recourse to circular reasoning and other weak forms of argumentation, since these things won’t help us to establish truth.

The French Renaissance thinker Michel de Montaigne was another man who believed in the importance of conversation. He was also a proponent of self-knowledge. His entire purpose in writing the Essays, his literary magnum opus, was to try and commit a portrait of himself to paper: “I am myself the subject of this book.” In doing so, he ended up spending the last decades of his life writing and rewriting over a thousand pages of his observations on every topic imaginable, from child-rearing to suicide.

In many ways, Socrates would have approved of this continuous process of self-examination – particularly Montaigne’s commitment to honest and open assessment of one’s selfhood. Montaigne shares his bowel habits and sicknesses with his readers, alongside his changing tastes in wine. He commits his aging body to paper alongside his evolving preferences for philosophers and historians. For example, Montaigne goes through a phase of fascination with Skepticism, before moving on to Stoicism and thus adding in more quotes and teachings from Stoic philosophers to balance out his older Skeptic preferences. All of this revision and reflection helps to create a moving literary self-portrait.

Indeed, the Essays were constantly revised and annotated right up until Montaigne’s death. In an essay entitled “On Vanity” he describes this process thus: “Anyone can see that I have set out on a road along which I shall travel without toil and without ceasing as long as the world has ink and paper.” This is one of many quotes which reveals Montaigne’s belief that true self-knowledge is indeed impossible. Montaigne frequently complains about the difficulties of attempting to properly ‘pin down’ his own selfhood, since he finds that his beliefs and attitudes towards various topics are always changing. Every time he reads a new book or experiences a particular event, his perspective on something might well change.

These attempts at self-knowledge don’t entirely align with Socrates’ belief that we should attempt to seek out truth in order to know what we ourselves believe. For one thing, Montaigne is not convinced that finding even objective truth in the world is possible, since books and theories are constantly being published that contradict one another. If this is true, then what can we ever truly know?

Well, Montaigne is content to believe that knowing thyself is still the only worthy philosophical pursuit. Even though it’s not a perfect process, which seems to evade him constantly, he uses the Delphic maxim ‘Know Thyself’ to argue that in a world full of distractions, we must hold on to ourselves above all else.

Of course, Socrates and Montaigne are not the only thinkers to ponder this phrase. Everyone from Ibn Arabi to Jean-Jacques Rousseau to Samuel Coleridge has explored the meaning and importance of ‘Know Thyself’. Self-knowledge is also explored in non-Western cultures too, with similar principles found in Indian philosophical traditions and even Sun Tzu’s The Art of War.

So how can we begin to use self-knowledge in our everyday lives? Thinking about who we are can help us to establish what we want, and what kind of person we would like to be in the future. This can be useful from a practical standpoint when making decisions about what to study at university, or which career path to follow.

We can also use self-knowledge to improve how we communicate with other people. Rather than simply believing what we think, without any further scrutiny, we should try and look more deeply at why we think that and be open to testing our assumptions. Analyzing our own opinions in this way can help us to defend our opinions and beliefs more convincingly, and perhaps even persuade other people to join our cause.

‘Know thyself’ has likely been treated as a valuable maxim within human society for thousands of years. Its inclusion on the walls of Apollo’s temple at Delphi cemented its reputation as a useful philosophical maxim. Socrates explored it in more detail and came up with his own interpretation, while thousands of years later, Montaigne attempted to put the aphorism into practice with his Essays. We can draw on these two influential figures to interpret ‘Know thyself’ for, well, ourselves and our own sense of selfhood.

M.M. McCabe, “It goes deep with me”: Plato’s Charmides on knowledge, self-knowledge and integrity” in Philosophy, Ethics and a Common Humanity, ed. by C. Cordner (Abingdon: Routledge, 2011), pp. 161-180