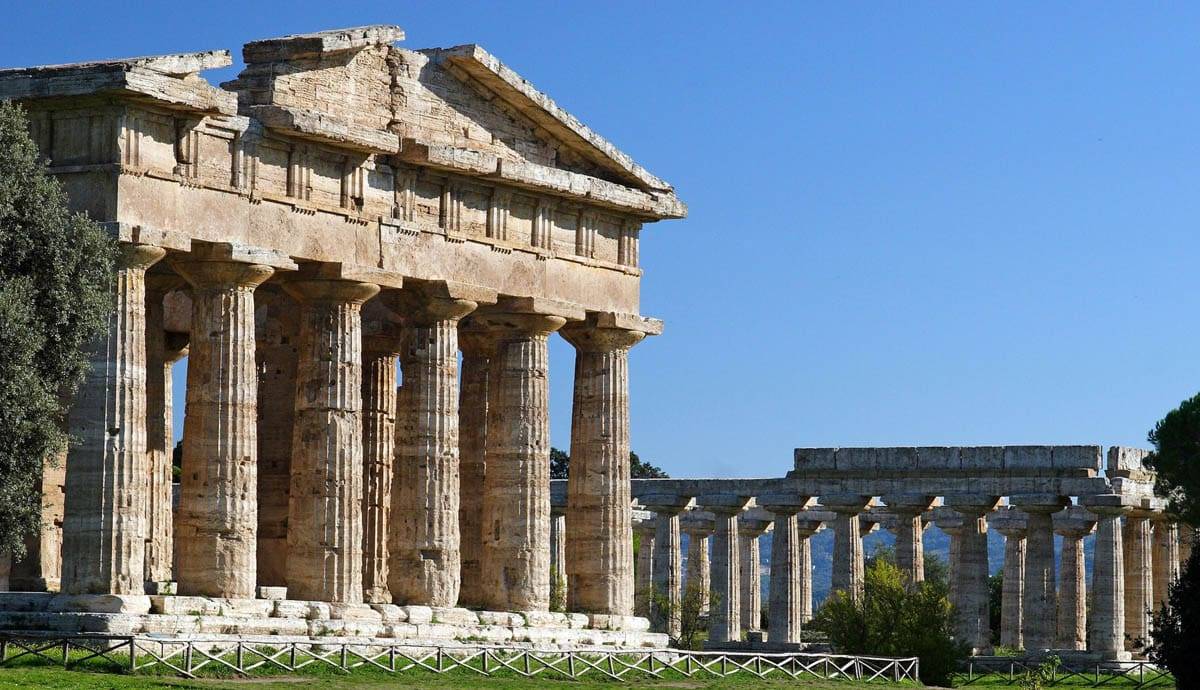 Ancient Greece was the foundation for many of our greatest achievements, from philosophy to art, literature, mathematics, politics and more. It is impossible to imagine where we would be today without it. Spanning a vast timescale of roughly 800-146 BCE, it continues to fascinate and inspire thinkers and scholars alike. But where exactly was Ancient Greece located? The answer is tricky, as it evolved and expanded on an unprecedented scale over the centuries, eventually covering great swathes of the world. Let’s take a look at the scope of its geography, and how this contributed to its success.

The first settlements of Ancient Greece began in the land around the Aegean Sea, including Greek islands, mainland Greece, and along the west coast of Asia minor. This was in around 800 BCE, a period of rapid development following the Greek ‘dark ages.’ The landscape here was heavily laden with mountains, and many small communities set up farms in valleys or on islands, where they could hide in the shadows or remain isolated from rivals or invaders. Each of these small territories had their own dialects and cultural beliefs.

Valleys Near the Aegean Sea Became Cities, or ‘City-States’

Many of the valley regions of the Aegean Sea evolved into Ancient Greek cities, also known as ‘city-states’, or polis. Each city-state was strictly territorial and fiercely independent. The mountainous geology of the land allowed divisions to remain somewhat securely in place, but many cities also fortified their boundaries with impressively large walls to further close themselves from outside attacks. These city-states became a vital component of ancient Greek society – each contained an urban center, surrounding housing and countryside. Many of their temples and government buildings were built on the top of a hill, or acropolis, such as the Parthenon, which still survives in modern-day Athens. Amazingly, there grew to be over 1,000 different city states in Ancient Greece (so far too many to list in this article!). The most dominant, populated and successful include Athina (Athens), Sparti (Sparta), Siracusa (Syracuse), Thebes and Corinth.

In its Prime, Ancient Greece Covered Islands Throughout the Mediterranean Sea, the Black Sea, and Beyond…

By the mid-8th century BCE, the Greeks had set up colonies throughout the Mediterranean and Black Sea. The borders of Ancient Greece spanned modern-day Italy, France, Spain, Turkey, and parts of North Africa, spreading all along coastal areas close to the sea. The Greek philosopher Plato once observed of their watery paradise: “we live around the sea like frogs around a pond.” In around 600 BCE Greek colonies went even further, reaching from the coasts of Spain in the west to Cyprus in the east, as well as covering expansive areas of present-day Ukraine, Russia, Egypt and Libya.

Much of Ancient Greece Was in Modern-Day Sicily and Southern Italy, Known at the Time as ‘Magna Graecia’

Sicily and Southern Italy were major centers for Ancient Greek colonization from the mid-8th century BCE onwards. Such was the extent of its Greek population, it was known at the time to early Romans as “Magna Graecia”, meaning “greater Greece.” Some of the reasons for this area’s popularity were its fertile soil and its links to trade routes, which allowed society here to prosper. The rich sophistication of their culture went on to inspire and hugely influence the Romans to come.

Following the daring conquests of Alexander the Great, king of Macedon, from 336 BCE to 334 BCE, the kingdom of Ancient Greece grew even larger than ever before, expanding throughout the eastern Mediterranean, Egypt, the Middle East, and even into parts of Asia, thus conquering large areas of the Middle East. There, Greek culture merged with ancient eastern traditions, forming a complex hybrid style of culture and society known today as Hellenistic. Eventually, Rome conquered Greece in 146 BCE, taking its place in the international limelight, but that’s a whole other story.

6 Spectacular Replicas Of The Parthenon