Sun Tzu's Art of War has held an elite status in Chinese strategy for millennia. From the Warring States period to contemporary China, Sun Tzu has defined Chinese warfare. 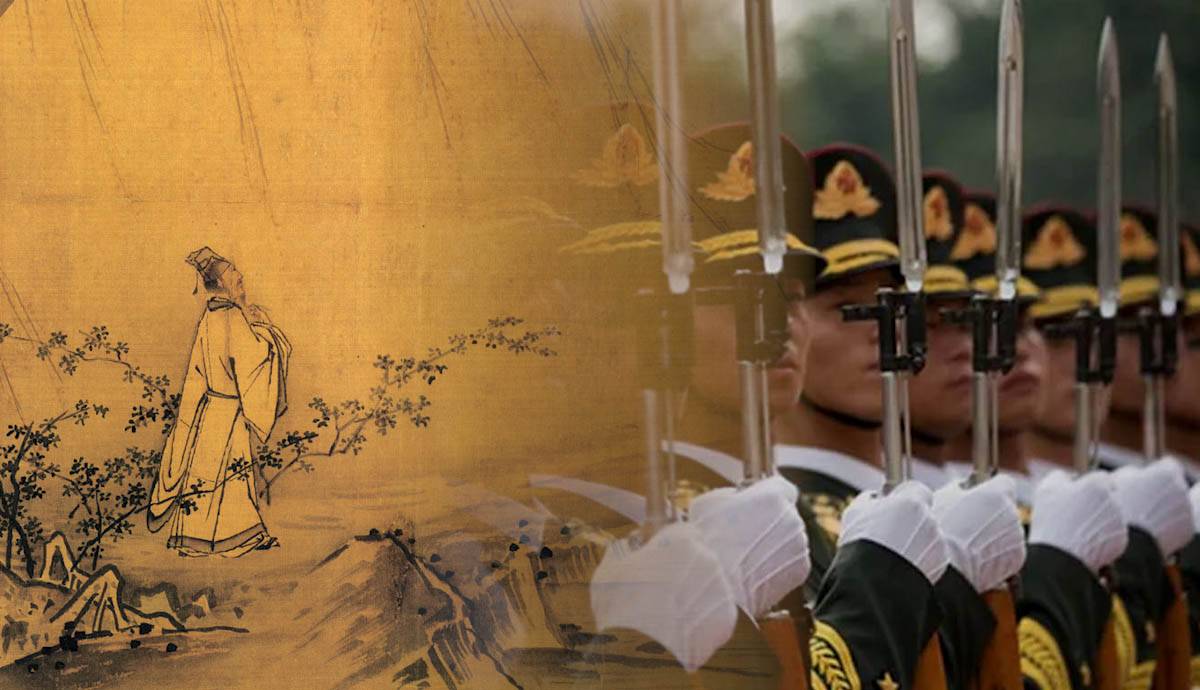 Sun Tzu’s Art of War is the most influential work in China’s Seven Military Classics, and the only one focusing entirely on military affairs. Sun Tzu holds firmly to the conviction that war drains resources and should be minimized as much as possible. However, war is a common human experience, and states must eventually engage in warfare in order to survive. When this occurs, war must be entered confidently and decisively, but also intelligently. Since the Warring States period, Sun Tzu’s theory has heavily informed Chinese strategy.

What we know of ancient Chinese strategy originated in the Warring States period (475-221 BCE). This was a period of great social and military upheaval in ancient China as the Zhou Dynasty fractured into warring kingdoms squabbling over territory and power. This period witnessed a transformation in military methodology. Improved farming techniques increased food production and population sizes, which allowed for larger and more destructive armies and the introduction of professional soldiers. New military strategies, tactics, and technologies also arose with a new emphasis on seizing control of enemy populations and territories.

At first, Sun Tzu’s Art of War was controversial for prioritizing rational methods over spiritual military practices. In fact, commentators believe that Sun Tzu personifies a radical shift in the Chinese conception of warcraft at the time. He writes: “Advanced knowledge cannot be gained from ghosts and spirits…but must be gained from men” (Sawyer 185).

The best knowledge, sage knowledge, uses the present to predict the future. It observes subtle physical signs to see where things are heading and manipulate that direction to align with one’s plans. This kind of knowledge is hyper-focused on the present situation and the ways in which it will evolve. It combines observation and intelligence.

Sun Tzu strongly stresses the commander’s role in gathering exhaustive intelligence on everything related to the enemy, the battleground, and one’s own condition. A good commander knows his men, the enemy, and tactical data. He must be able to manipulate others, understand the enemy commander, infer motives from behavior, and see people for who they truly are. However, it is not enough to simply have information about the enemy. He also must be masterful at using that information to his advantage.

Tactical victory depends on the commander’s ability to correctly interpret the physical signs available to him and anticipate his enemy’s plans. Sun Tzu does not believe that knowledge can make certain the uncertainties of war. Instead, he expects commanders to minimize uncertainties via knowledge and rise above them via their own cunning. Here is where the importance of Sun Tzu’s famous axiom, “Warfare is the Way [Tao] of deception” (Sawyer 159), becomes apparent as a pillar of his theory of strategy.

Sun Tzu expected commanders to be highly skilled masters of deceit. Deception is an invaluable aspect of strategy as a means to achieving victory. Through successful deception, a smaller state can conquer a larger one. It can upset an asymmetrical balance of power. Through deception, the enemy can be conquered with minimum or even a wholesale lack of violence. War, then, is more about strategy than it is about fighting. Remember, the Art of War was written during a period when rulers wanted to minimize the material cost and damages of war. To protect their limited commodities, Sun Tzu moves war into the realm of the mind, where one commander’s strategic intelligence is pitted against another’s. At the heart of this mind-driven military method is deception.

If used skillfully, deception can eliminate the danger of the enemy predicting one’s plans. The commander can then act without being seen to act. Deception can be used in two different ways: firstly, to defend one’s self from view; secondly, to hide one’s offensive actions. The success of the latter relies on the success of the prior. Deception in this manner is a facet of the larger concept of form and formlessness.

The terms form and formless encapsulate the idea of knowing the enemy (form) while one’s self remains hidden (being formless). The enemy’s form can be discovered through knowledge and the commander’s ability to interpret and anticipate the enemy’s plans, as previously discussed. Formlessness involves deception as a means of hiding one’s self from view. Fluidity and adaptability are crucial for sustaining a good defense, the capacity for surprise, dynamic energy, and shielding against enemy intelligence. Sun Tzu writes: “the pinnacle of military deployment approaches the formless. If it is formless, then even the deepest spy cannot discern it or the wise make plans against it” (Sawyer 168).

Absolute flexibility is not only required for maintaining a visage of formlessness but also for approaching the uncertainties of war.  As situations constantly change in real-time,  a commander must be aware of the appearance and disappearance of opportunity and immediately adapt his plans. Therefore, Sun Tzu discards concrete, predetermined strategic choices in favor of being flexible and decisive in the moment.

Forceful action should only be taken when advantageous. Attacks should utilize speed and efficiency, but not at the risk of hastiness. In the third chapter of the Art of War, Sun Tzu lists five ways for a general to “know” victory: 1) knows when and when not to fight, 2) knows how to employ differing numbers of troops, 3) has one mind amongst his men, 4) faces the unprepared with an attitude of preparation, 5) is capable and not constrained by the government.

Once the commander determines that he holds the advantage and the means to victory, he attacks swiftly, either creating or seizing his advantage in a way that will ensure his success. “If the enemy opens the door, you must race in” (Sawyer 183). This force is like a precision strike, using one’s full weight on the enemy’s weak point.

In summary, Sun Tzu believes that war is costly and potentially ruinous for the state and should be undertaken cautiously. Sage knowledge, deception, and formlessness are all means by which a commander can secure an advantageous position over his enemy. From this superior position, he can attack swiftly and decisively.

Consequent Theories of War and Strategy

Several basic types of warfare emerged after Sun Tzu’s Art of War, encompassing both military and non-military realms. Ideological warfare seeks to conquer the opponent through the minds of its ruler, officials, troops, and people without having to resort to physical combat. Ideally, this is achieved through diplomacy. Ideological warfare may also include subtypes such as psychological and media warfare.

Integral warfare is conducted simultaneously in the administrative, diplomatic, and military spheres. Improving one’s economy and civil organization, resolving internal conflicts, increasing military training, conducting peace negotiations, gathering allies, and sending the army into the field to begin limited operations. This type of warfare exemplifies the multidimensional elements of the Chinese conception of grand strategy, both ancient and modern. Ideological and integral warfare will be further discussed in regards to contemporary Chinese strategy.

Chinese Communist revolutionary Mao Tse-tung was a self-proclaimed student of Sun Tzu. His military theorizing was refined during the 22 years that he led a Communist peasant army in guerilla warfare against the Chinese Nationalists, ending with the establishment of the People’s Republic of China in 1949.

Mao’s writings paraphrase much of Sun Tzu’s Art of War. He similarly emphasizes deception, surprise, and illusion, as well as targeting the enemy’s will to resist. Mao draws heavily on Sun Tzu, but adapts and expands his theory to incorporate topics such as guerilla warfare, protracted wars, and revolutions. Though certainly, he adds much of his own ideas, you can still see Sun Tzu’s influence strongly. For example, Mao describes guerilla strategy to be established on intelligence, secrecy, mobility, unconventionality, and decisiveness. The commander should consider all contextual factors, confuse the enemy, exploit all his weak points, and take advantage of changing elements.

Mao’s military career demonstrates his flexibility in using whatever type of warfare best suited his objective. He was a master of guerilla warfare, but also used mobile warfare, positional warfare, ideological warfare, and others. He was especially aware of the power of propaganda and utilized it extensively in integrated warfare.

The legacy of Sun Tzu’s Art of War pervades Chinese strategic thought even today. The Chinese military’s highest educational institution, the People’s Liberation Army National Defense University (PLANDU), has used Sun Tzu’s Art of War as the foundational text for all enlisted servicemen since 2006. The PLA Army Command Academy in Nanjing quotes Sun Tzu on its walls. Even the PLA Navy Submarine Academy applies Sun Tzu’s “warfare is the way of deception” to submarine operations. Chinese officials can recite entire passages from memory.

The PLA International Relations Academy in Nanjing taught disintegration warfare from 2003 to 2009. Disintegration warfare is integrative, using many non-military tools to deceive, disrupt, and defeat the enemy without military conflict. The U.S. Secretary of Defense’s 2009 annual report to Congress stated China’s strategy as stressing asymmetric advantages while exploiting their opponent’s perceived vulnerability by using “assassin’s mace” programs such as counterspace and cyber warfare.

China also utilizes Sun Tzu’s advice on spies and intelligence. FBI agent Katrina Leung is an example of a double agent who contaminated 20 years of PRC intelligence and compromised the FBI’s Chinese counterintelligence program. Another form of spying is espionage; The U.S.’s Counterintelligence Report of 2011 declared China as “the world’s most active and persistent perpetrators of economic espionage.” Coupled with China’s notorious characteristic of non-transparency, this strategy closely follows Sun Tzu’s principles of form and formlessness as well as deception.

By Andria PresselMLitt in Strategic Studies w/ Military History ConcentrationAndria has an MLitt in Strategic Studies from the University of St. Andrews. Her research specializes in military history, but she loves anything related to the past, especially ancient, medieval, and religious history. She is also enthusiastic about philosophy, psychology, and international relations. When not writing, she may be found backpacking or wandering through the local bookstore.