Socrates Sips Wine & Discusses Love: What Happens at a Symposium?

A symposium was a key aspect of ancient Greek culture. Plato wrote about a fictional symposium where Socrates discussed love. 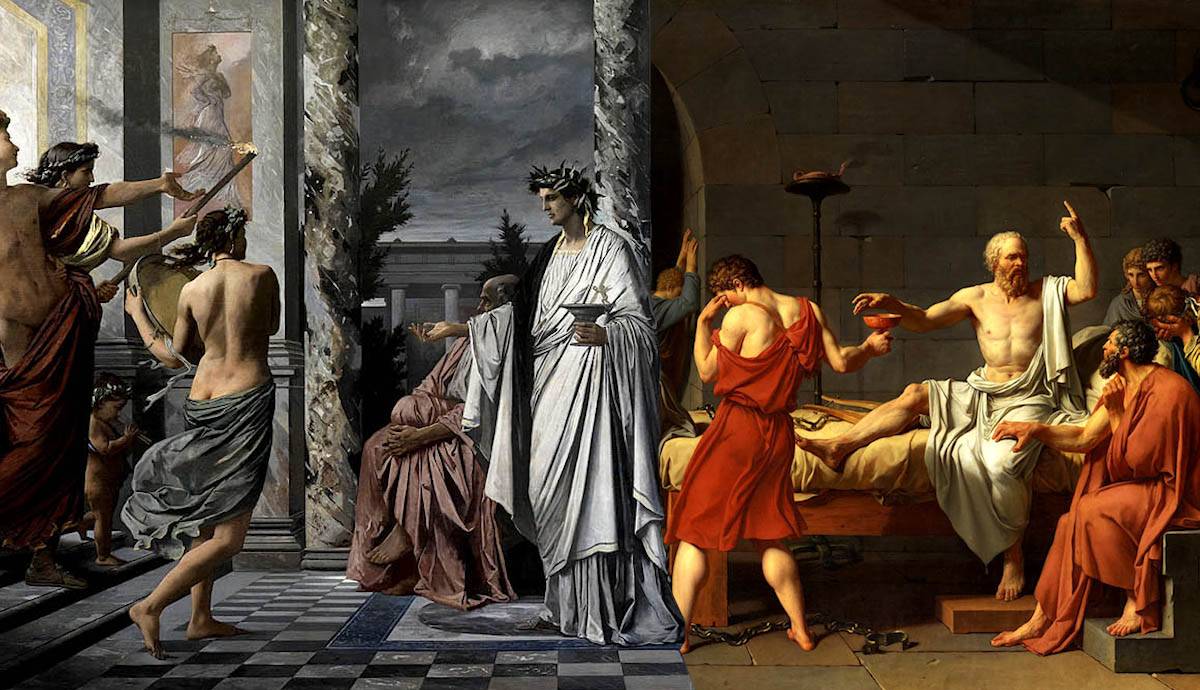 The ancient Greeks knew how to party. The symposium was a men’s-only party where conversation flowed like wine and Greeks let loose. The Symposium was a key aspect of ancient Greek culture immortalized in ancient pottery and the works of Plato and Xenophon. Most famously, in Plato’s Symposium, Socrates discusses the nature of love as he drinks wine with a group of friends.

What Was a Symposium?

A symposium (which means ‘to drink together’) was a form of an ancient Greek party. There, discussions of poetry, philosophy, art, and politics were accompanied by literal buckets of wine. These symposia followed dinner and became popular sometime after the 7th century BCE.

Symposia, like the salons of 18th century France, were held in Greek homes which even included a specific room for these events, called andrōns. These rooms were situated near the front of the home. This way, the rest of the house and especially the upper floor, where the women of the household stayed during a symposium, was kept out of sight and mind. In the andrōns, men would sit on lavish couches called klinai. These reclining couches would border the room so that the middle was free for entertainment. Partygoers drank wine from beautifully decorated cups made from terracotta or even precious metals.

Both Plato and Xenophon discuss the dangers of heavy drinking at a symposium. In the words of Xenophon, voiced by Socrates: “If we pour ourselves immense draughts, it will be no long time before both our bodies and our minds reel, and we shall not be able even to draw breath, much less to speak sensibly.”

However, the Greeks might have been too cocky when it came to self-control while drinking alcohol. Many vases depicting scenes from symposia show that these parties often turned wild. One vase depicts a man throwing up as a slave holds his hair back. Another vase shows men dancing in dresses they stole from their wives. The Greeks knew that it’s okay to drink and act silly! Dancing in dresses is always fun!

Symposia were not meant for all men, but for men of the noble or aristocratic class. In other words, if someone was famous during these BCE times, they most likely visited or hosted a symposium.

One famous guest who went on to write about a symposium was the famous Greek philosopher Plato. Plato was born during the 5th century BCE in Athens and died sometime in the 4th century BCE. He was the student of Socrates and he later became the teacher of Aristotle. Plato often reflected on what he learned from Socrates and many of his writings were elaborations on Socrates’ teachings as well as total revisions of his ideas. Plato founded the Academy, known by most scholars as history’s first university, from where we get the term academia.

In Plato’s most renowned work, the Republic, Plato envisioned a perfect world where there are no average leaders, but leaders who are philosophers and govern based on wisdom instead of emotions and a love of power. Plato also wrote about the legend of the lost city of Atlantis. Even today, he remains one of the most influential thinkers.

Sometime in the 4th century BCE, Plator wrote the Symposium, a compilation of speeches from a fictional symposium. Socrates is one of the characters attending this fictional event where guests spend a good amount of time discussing love.

Plato believed that love transcended gender and physical desire. In the dialogue, one guest, Phaedrus, says that love is the oldest God and the number one motivator for people to become better. Pausanias, another guest, adds to Phaedrus’s speech by discussing the difference between Common Love (physical desire or lust) and Heavenly Love referring to love between an older man and a young boy. To Pausanias, when a boy has intercourse with an older man, he gains knowledge, wisdom, and virtue. This is tough to hear today since this Heavenly Love seems to suggest pedophilia. However, this was not an uncommon practice in ancient Greece. Typically, young boys were assigned older male mentors who taught them a range of things, including sex. Of course, this is wrong today, but at symposia, it was typical for a father to introduce his young son to an older mentor who was often a friend of the father.

Another guest at Plato’s Symposium, a doctor named Eryximachus, suggests that love is broad. In his opinion, people can find love through the arts, music, song, and even medicine (his craft).

Aristophanes, the famous comic playwright, also appears. He presents a popular myth of the time that claimed that people originally had four arms and legs. Zeus, angry at them for a reason, cut humans in half. Ever since every single human has longed for their missing half (literally and figuratively).

It’s unclear if Plato disagreed with Phaedrus or Eryximachus. However, Plato, through Socrates’ voice, asserts that love is no god, but a spirit shared between people and their prospective lovers or partners. Love is something bigger than us all and we must strive to feel that spirit with another human being.

Plato also mentions that beauty (inside and out) is related to knowledge and touches on wisdom. During the Symposium, Plato has his fictional guests decide that wisdom isn’t the act of learning new material but of teaching the soul information it knew before coming into the material world.

Plato’s Symposium is one of the only literary references to a symposium that scholars and historians can study. Even though images of symposia (mostly of men reclining on couches, drinking wine, and having intercourse) are depicted on ancient vases, Plato gives us a wonderful overview of the vibe of these lavish and intellectual parties. Also, the Greek philosopher gives us a peek into what people would have discussed during these events.

The Symposium Beyond Plato

Plato wasn’t the only one writing about symposia during the 4th century BCE. The military leader turned historian, Xenophon, wrote his own Symposium also starring Socrates. In this work, guests discuss the nobility of the soul as well as the best forms of knowledge, much like in Plato’s version.

There isn’t an exact date for when symposia ceased to exist. Yet, there are similar parties that pop up later in history that were clearly inspired by the party format that the symposium introduced.

Later in the 1920s, surrealist author Gertrude Stein also held Salons in her house in Paris. There, she would critique the works of authors such as Ernest Hemingway or artists like Pablo Picasso and Amedeo Modigliani.

By Zoe MannBA Art HistoryZoë is a graduate student living in Los Angeles studying screenwriting. Originally from New York, she received her B.A. in Art History from Pace University. She has worked in art galleries in Manhattan and the Art Institute of Chicago. In her free time, she loves researching for her historical fiction projects and playing with her cat, Harrison.

Pedophilia in Ancient Greece and Rome