The Minotaur was a mythical beast from Greek Mythology that was half-man and half-bull. 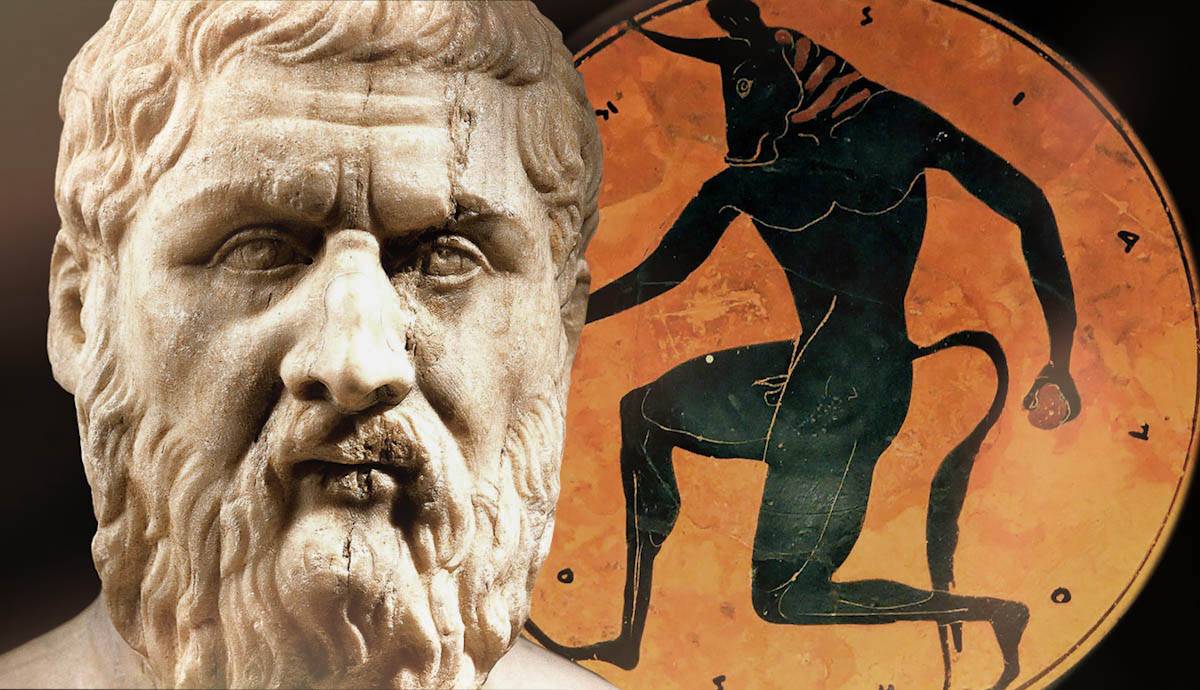 Half-man and half-bull, the monstrous Minotaur was a beast to behold. With the head of a human and the lower body of a bull, the Minotaur legend has roots in a time when Zeus and the pantheon of Greek Gods ruled the universe. Best known from the myth of Theseus and the Minotaur, the story was always a legend, but is there some truth to it?

The Legend of Theseus and the Minotaur

The legend of the Minotaur begins with King Minos, one of three sons of Zeus and Europa. Europa and her human-husband, the King of Crete, Asterion, raised their boys together (Minos, Sapedon, and Rhadamanthus). When Asterion died, his sons fought over the throne. Minos, whose name means King, claimed the throne for himself and banished his two brothers from the island forever.

With his own wife, Pasiphae, Minos ruled Crete claiming that he had the approval of the Gods who would do anything for him. To prove this, Minos went to the ocean and asked Poseidon, God of the Ocean, for a bull to appear from the watery depths. In return, Minos would sacrifice the bull in the god’s honor. Poseidon was interested in Minos’ devotion, so he created a bull that appeared from the waves. However, the bull was so beautiful that Minos didn’t have the heart to kill the animal. So, the king sacrificed a normal bull and took the beautiful animal as his own.

Poseidon found out that Minos had not kept his word and cursed Pasiphae to fall in love with the bull. Soon, Pasiphae was pregnant with the bull’s child, who grew up to be the Minotaur (the name literally means “bull of Minos”). Minos was ashamed of the child who became violent as it grew. Eventually, the king forced the mythical inventor Daedalus to design an elaborate labyrinth underneath his palace. It was there that the Minotaur would live from now on.

During the construction of the maze, Minos’ only son, Androgeos was killed in Athens. Upset, Minos demanded the Athenians to pay for his son’s death. Athens agreed to send seven young men and women every nine years (other versions of the legend say every year). These Athenians were sacrificed to the Minotaur.

One year Theseus, the son of King Aegeus, volunteered as a sacrifice and claimed that he would kill the Minotaur ending Minos’ reign of terror. Before leaving, Theseus said that if his ship returned with white sails, he would have succeeded in his mission. However, if the sails were black, he had failed. In Crete, Minos’ two daughters, Ariadne and Phaedra, fell in love with Theseus. Ariadne didn’t want to see Theseus die so she gave him a string to retrace his steps in the labyrinth. Theseus finally entered the maze and killed the Minotaur with his bare hands. Other versions claim that he used a sword he had snuck in. Theseus used the string of Ariadne to successfully exit the labyrinth and left Crete with Ariadne and Phaedra. However, as he entered Athens, he forgot to replace the black sails with white. His father saw the black sails and believing his son dead, he threw himself out the window, too grief-stricken to live.

Sir Arthur Evans was a British archeologist who discovered the palace of Knossos on the island of Crete in 1899. Due to what he found at the site, Evans concluded that Knossos was the palace of King Minos.

The palace is adorned with frescos that depict bull jumping (the art of jumping over a bull by holding onto the horns). Evans also found it difficult to make his way around the palace with its labyrinth-like floorplan. It was clear to Evans that the Minoans (the name Evans attributed to the people living on Crete) likely inspired the legend of Theseus and the Minotaur.

Knossos: Possible Home of the Minotaur

Knossos is a ruin one can visit today on the north side of Crete, south of the city of Heraklion. The palace covers 150,000 square feet (equal to 14,000 square meters). To better visualize the size of this ancient wonder, picture a little more than two football fields next to each other. In other words, the Minoans knew how to build a palace to impress. Archeologists have long argued about the age of the palace with some of the structure dating to 1950 BCE, and other parts dating back even further. Crete often suffered from earthquakes and parts of the palace had to be rebuilt over the years. After years of rebuilding after disasters, an earthquake and tsunami permanently destroyed Knossos around 1300 BCE.

As for Minos, there are some writings that claim a King Minos existed. However, some scholars aren’t sure if the word Minos refers to the ruler (like the title of Pharaoh in ancient Egypt) or to the same King Minos from the Theseus and Minotaur legend. Today, experts aren’t sure if King Minos even existed and if he did, there is no concrete evidence that he resided in Knossos. However, there is still a possibility that there was a king named Minos, with a palace in Knossos. However, it is more likely that he simply resided in a maze-like palace and was into the art of bull-leaping. Whatever the case, Knossos is a beauty to behold.

Evidence From a Trustworthy Source

Even though scholars aren’t on board with King Minos and the Minotaur being real, the all-knowing philosopher Plato also mentioned the story. Plato needs no introduction, but to make a long story short, he was born around the 5th century BCE in Athens. He was a student of Socrates and later a teacher to Aristotle. Plato was the founder of the Academy, which was a college in Greece (the word Academia comes from his school). Plato focused on certain concepts which defined life and thought, such as justice, beauty, and knowledge.

Plato’s writings have long been under investigation by modern-day philosophers and scholars. In his work Critias, the philosopher discusses the popularity of bull hunting and jumping on a certain Greek island. What is interesting is that Plato isn’t talking about the island of Crete, but the city of Atlantis, which, in the same story, is swallowed by the waves and forever lost to time.

It has long been believed that Plato was making Atlantis up and was actually referring to Crete. Throughout its long and rich history, Crete battled with earthquakes which turned into violent tsunamis, and Plato, taking some creative liberties, constructed the story of Atlantis as an extraordinary work of fiction. To go back to the legend of the mighty Minotaur and all the references to bulls on the walls of Knossos, Plato was probably telling the truth about Atlantis/Crete’s obsession with bulls which is evidence towards the legend of Theseus and the Minotaur having some relation with some real events.

Additional Versions of the Minotaur Myth

There is one alternative theory that King Minos and the Minotaur were the same figure and together represented the Greek God Helios. Helios is the God of the sun, the Guardian of oaths, and the God of sight. Just like his namesake, Helios rose at dawn on a flying horse-drawn chariot and hung out in a golden cup in the sky until it was time to rest in the East. Helios is a handsome God (what God isn’t) who wears purple robes with a sun-like crown on top of his head.

There isn’t a lot of evidence to back up this theory. However, in the classic legend, King Minos’ wife, Pasiphae, is the daughter of Helios, making Minos his son-in-law. If the theory is correct this would mean that Pasiphae married and birthed her own father, which is weird, but weirder events have occurred in ancient Greek mythology.

An additional theory about the Minotaur is that the legend represents the liberation of the Athenians from the hold of the Minoans. The Minoans were a powerful people who once reigned supreme across Crete.

The legend of Theseus and the Minotaur isn’t kind to the Minoans since it depicts King Minos disrespecting Poseidon, his wife having an affair with an animal, her giving birth to the Minotaur, and both the bull and Minos’ human-son dying horrible deaths.

On the other hand, if you look at Plato’s Critias, he documents the fall of the city of Atlantis and if Atlantis was a pseudonym for Crete, then Plato is referring to a powerful civilization. Atlantis/Crete had advanced technologies, great power over the islands surrounding it, and was destroyed by a natural disaster.

Whatever the case, the legend of Theseus and the Minotaur has long intrigued scholars and casual readers alike. There is no way to tell for sure if the Minotaur, King Minos, and Theseus of Athens even existed. But although the Minotaur as a half-man and half-bull creature could not be real, some theories point to a myth that could be related to real events.

By Zoe MannBA Art HistoryZoë is a graduate student living in Los Angeles studying screenwriting. Originally from New York, she received her B.A. in Art History from Pace University. She has worked in art galleries in Manhattan and the Art Institute of Chicago. In her free time, she loves researching for her historical fiction projects and playing with her cat, Harrison.

Socrates Sips Wine & Discusses Love: What Happens at a Symposium?
By Zoe Mann, in Ancient History
Art of the Black Death: Medieval Artists Facing a Pandemic (9 Artworks)
By Zoe Mann, in Art

The Ship Of Theseus Thought Experiment

Rewriting Ariadne: What Is Her Myth?