Zeno of Elea is known most of all for his paradoxes, which show that some common-sense and irrefutable assumptions contradict each other. 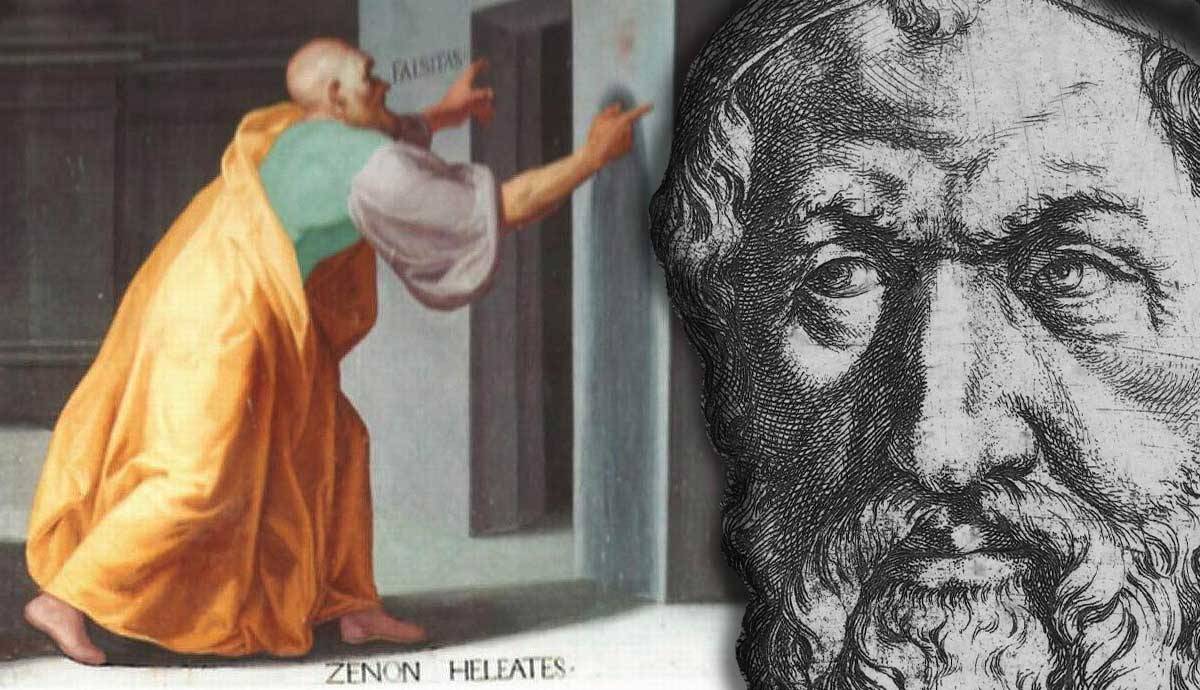 Zeno of Elea was one of the great philosophers of the Pre-Socratic period. After a brief introduction problematizing the notion of “Pre-Socratic” philosophers, we will explore what is known about Zeno’s life. Afterwards, we will tackle Zeno’s most famous philosophical contribution: the invention and development of the philosophical paradox.

Zeno of Elea: The Sources We Have

Before getting into Zeno of Elea’s biography and philosophy, two things have to be cleared up. First, there is much dispute over the continued use of the designation ‘Pre-Socratic’, and it is worth clarifying what it means. Although there are various unhelpful ways in which people have tried to define ‘Pre-Socratic’ philosophy, a simple and useful distinction can be drawn between the philosophers who practiced philosophy which was not responsive to the work of Socrates (either as experienced in person, or as understood from Plato). A set of distinct philosophical concerns arise from Socrates, albeit ones which are not wholly separable from previous philosophers.

It is useful to distinguish the Pre-Socratic period in Greek philosophy, which ran from roughly 600 BC to 350 BC, on more practical grounds. This leads into the second point of clarification: we have inherited little or no written material from many philosophers of this period, Zeno amongst them. Generally, speaking, those philosophers from Socrates onwards have left us with far more direct source material, whereas with many Pre-Socratics we are left to fumble with some fragmentary primary sources (and for Zeno we don’t even have that much), and dubious secondary sources.

There are few credible accounts of Zeno’s life. One of the most extensive sources for the lives of ancient philosophers – that of Diogenes Laertius – also happens to be one of the most unreliable, fanciful and inarticulate. Diogenes Laertius devotes the majority of his account of Zeno’s life to recounting Zeno’s role in a plot to overthrow a local tyrant. Whether or not this account is true, it isn’t especially illuminating with respect to Zeno’s thought, and that is the primary purpose of examining the life of a philosopher.

What we do know with some certainty is that Zeno of Elea’s productive years were spent in the region known now as Magna Graecia; that is, the region of Southern Italy which was Greek speaking at that time, and that he was taught by (and likely lover of) Parmenides of Elea. Zeno’s relationship with Parmenides. Indeed, one of the most famous and most important sources we have about Zeno is Plato’s dialogue Parmenides, in which there is a conversation between Socrates and Zeno, then Socrates and Parmenides, concerning questions central to their shared philosophical project. The dialogue is supposed to take place after Zeno has given a reading from his book (of which, again, nothing has survived). This exchange is famous, and oft-quoted as representative of Zeno’s philosophy as a whole, such as we can make it out.

First, Socrates offers a succinct interpretation of Zeno of Elea’s negation of multiplicity in general: “If the things that are are many, that then they must be both like and unlike, but this is impossible. For neither can unlike things be like, nor like things unlike’? Is this not what you say?”

We can think of the negation of multiplicity in this context as the denial of the existence of many things and of things with many qualities. The critical philosophical move of Parmenidean philosophy, of which Zeno appears to have been a staunch advocate, amounts to the belief that some of these qualities are mutually exclusive – they cannot be held at the same time, or are perhaps directly contradictory. What follows from this, on Socrates’ reading of Zeno, is simply that “contrary to everything normally said, that there are not many things.” This belief in the “oneness” of things we can call Monism.

The belief that there is, in a strict sense, only one thing (which is often called ‘strict’ Monism) is just one interpretation of various common interpretations Parmenides, and therefore we can understand Zeno of Elea’s commitment to oneness in a plethora of ways. Accepting that proviso, however, we should also emphasize that this is a self-consciously unintuitive philosophy. Zeno here explicitly accepts that it runs against common sense.

The relationship between philosophical theory, and the assumptions by which we lead our daily lives, is a major concern for philosophers of almost every period. This tension can also be understood to relate Zeno’s Parmenidean Monism to his paradoxes, because these paradoxes attempt to show that several common sense assumptions which we are equally unwilling to relinquish are, in fact, contradictory.

Having already noted that Zeno appears to acknowledge that his philosophy at large is not intuitive, these paradoxes are not simply puzzles, but puzzles with a point: namely, the incoherence and problematization of common sense in philosophy. This purpose was at least as central to Zeno’s development of paradoxes as was his determination to defend a negation of multiplicity directly.

The closest thing we have to a fragment of Zeno of Elea’s philosophical work comes from Simplicius, a Neoplatonist and commentator on Aristotle. He quoted Zeno thus: “If there are many things, it is necessary that they be just so many as they are and neither greater than themselves nor fewer. But if they are just as many as they are, they will be limited. If there are many things, the things that are are unlimited; for there are always others between these entities, and again others between those. And thus the things that are, are unlimited.”

The Second Paradox: A Paradox of Motion

This is also the central thought behind one of Zeno’s most famous paradoxes, and it comes to us from Aristotle: “First, there is the argument about its being impossible to move because what moves must reach the half-way point earlier than the end… Therefore the argument of Zeno falsely presumes that it is not possible to traverse or make contact with unlimited things individually in a limited time”.

How can we expect to move through infinitely many points in a limited period of time? This seems impossible, and yet we do, in fact, move.

The Reasoning Behind the Paradoxes: Zeno and Infinity

We are again forced to confront Zeno of Elea’s conception of intermediacy as a dimension of his paradoxes and his wider thought. Zeno seems convinced that between two different things, there must be other, intermediate things. This is the central thought behind both of the paradoxes we have examined so far, and because it isn’t obvious why it would be so, we need to clarify what motivates it.

Reception and Responses to Zeno of Elea’s Paradoxes

There isn’t space to cover all of Zeno’s paradoxes here, but it is worth saying something about how they have been received since. As mentioned previously, the argumentative force of the paradoxes seems to be greatly dependent on their problematization of everyday assumptions. That is especially true for our assumptions about physical bodies.

It isn’t hard to see why Zeno is often credited as the inventor not just of the paradox, but of the reductio ad absurdum; to take an argument to its natural conclusion, and by carrying the thought which lies behind an assumption beyond the environment in which that assumption developed, and therefore the environment in which it makes sense, demonstrate the contingency of such an assumption.

Arguably, the development of physical theories which run against the assumptions we ordinarily make about the external world is the first step towards the development of natural science in the Greek world, and therefore modern science as it is practiced today.

How to Be Happy According to Plato