What does Plato’s Parmenides, one of his most difficult and enigmatic works, tell us about his philosophical methodology? 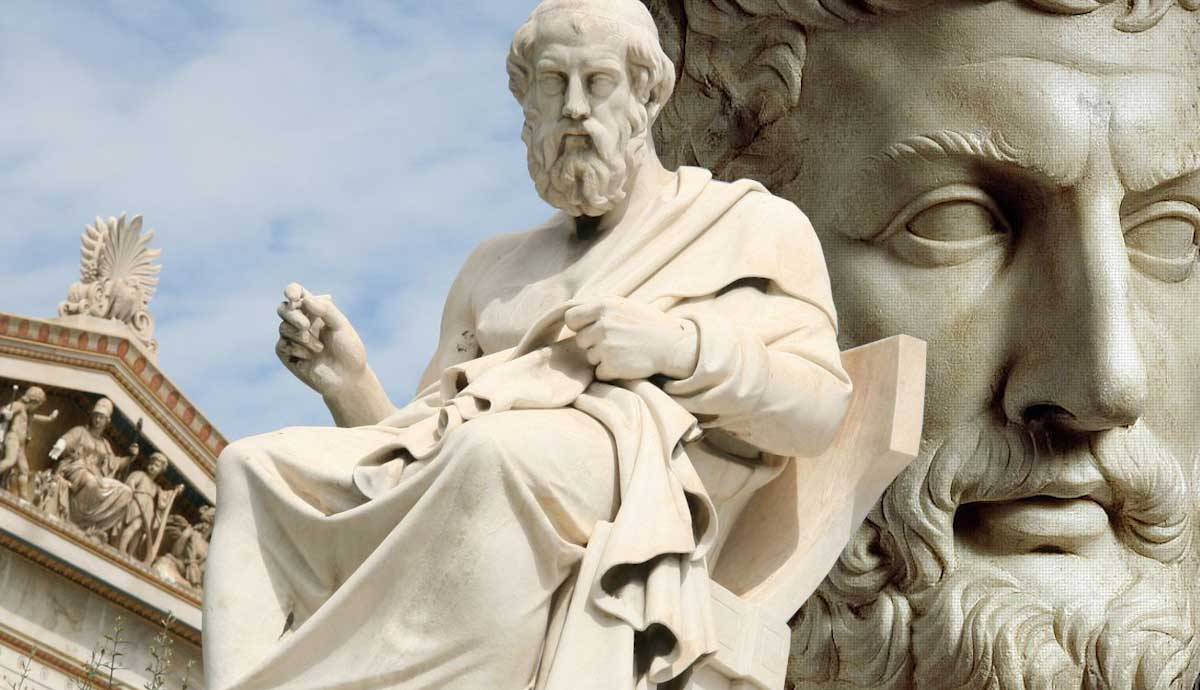 Plato’s Parmenides is often regarded as one of, if not the most challenging Platonic dialogues, both to understand in a sequential, sentence to sentence way, and to draw even the most general conclusions from it. It is also exceptional in the range of stylistic, structural and metaphilosophical techniques deployed, making it an exceptionally challenging piece to interpret.

Yet it remains a critical part of Plato’s corpus, both because it indicates how he relates his own thought to that of the preceding Eleatic philosophers Parmenides and Zeno, and because it develops several aspects of Platonic metaphysics, most notably the ‘Theory of the Forms’, perhaps the definitive Platonic contribution to modern philosophy. This article is not a blow by blow interpretation, but rather seeks to summarise both the approximate structure of the dialogue, and to consider what it tells us about Plato’s philosophical methodology more broadly.

The events of the Parmenides’ are purportedly relayed to Plato from an eyewitness, although historians of the period have given us good reason to suspect the events never took place. The dialogue is set after Zeno has given a reading from his book, a defence of Parmenidean metaphysics against its critics. Zeno was Parmenides’ student and probably his lover as well, and was a strident defender of Parmenides’ thought.

The events of the dialogue itself concern a subsequent discussion on the merits of Parmenides’ philosophy and then of the issues raised by that discussion, initially between Socrates as a young man and the far older Parmenides and Zeno, and then between Aristotle (not the famous philosopher, a different man) and the Eleatics.

What intellectual relationship there is between Plato and Socrates is difficult to trace precisely, but we can roughly summarise that Plato and Socrates cleave to the same philosophical viewpoint. Socrates’ arguments in the various conversations portrayed by Plato are never incidental; they have to be understood as in some way relevant to the philosophical purposes that Plato has in mind.

What’s Unique About the Parmenides?

One thing that is singular about the Parmenides (and there are many), is that Socrates is being asked questions by Parmenides, rather than asking them. Perhaps even stranger; Socrates appears to lose; that is, to contradict himself, to talk past himself, to revise points and abandon them. As he will come to chastise so many of his interlocutors for a lack of intellectual rigor and an overly conventional view of society, language, logic or reality in other Platonic dialogues, so too he is chastised by Parmenides for failing to follow through all of the consequences of his theory – in particular, the consequences of his theory for seemingly insignificant objects.

He also exhibits another major intellectual flaw, perhaps the main flaw he spends so many other dialogues exposing in other people, which is an inability to give up arguments which appear to be refuted, or in which inconsistency is shown. In fact, at the end of the first part (the discussion between Socrates and the Eleatics), even though Socrates’ conception of the form has been seriously battered and dog-eared, it is Parmenides who appears to relent and agree with Socrates.

Parmenides, and the Eleatic philosophers who followed him, is well known for his doctrine of monism. Monism, in a general sense, is the doctrine which holds that ‘all things are one’, or ‘there is only one thing’. The strictest forms of monism hold this view in the most literal sense; that despite appearances (indeed, precisely in spite of appearances) there exist not many things, but only one thing. This is one common interpretation of Parmenides’ philosophical stance that W.K.C Guthrie gives, ‘“that reality [is], and must be, a unity in the strictest sense and that any change in it [is] impossible” and therefore that “the world as perceived by the senses is unreal”, although softer versions of monism are also attributed to him.

Parmenidean being can be understood in contrast with logical identity, an extremely influential idea developed extensively by Leibniz which has proven extremely influential upon subsequent philosophers. Leibnizian conception of identity – obtains between a and b when a and b are (1) indiscernible, or (2) their names are substitutable for one another, or both.

For Parmenides, being is an absolute affirmation of a, to the exclusion of every other thing and every possible representation of a, including language. Nothing else can be said of a. Parmenides’ actually goes even further than this – to specify a definite entity, a, is also to presuppose the possibility of other entities (e.g b).

The specification of an entity is therefore seen by Parmenides as a negation or denial of difference. Parmenidean being is therefore a kind of absolute focus, a fixation not on a thing as opposed to what it is not, but just on what it is. By the time he comes to write the Parmenides, Plato has long been concerned with the relationship between one form, and many sensible things which bear its name. These are central concerns in both Phaedo and the Republic, but to understand them we have to understand what Plato understands by the concepts of a form and a sensible thing.

Forms, the One, and the Many

Richard Kraut summarises Plato’s conception of the forms, at least as it stands in these dialogues, as follows: “The world that appears to our senses is in some way defective and filled with error, but there is a more real and perfect realm, populated by entities (called “forms” or “ideas”) that are eternal, changeless, and in some sense paradigmatic for the structure and character of the world presented to our senses. Among the most important of these abstract objects (as they are now called, because they are not located in space or time) are goodness, beauty, equality, bigness, likeness, unity, being, sameness, difference, change, and changelessness.” The crucial question for Plato in the Parmenides changes, to focus on the relation between any particular individual thing, any ‘one’, and any multiple, any ‘many’.

To overcome the Parmenidean perspective, Plato must both explain how plurality is possible and how relations within such a plurality are possible. Securing this euporia will then allow Plato to go into some detail about the world of the forms, and his wider metaphysics. It is worth pausing here to consider some detail this concept, euporia, and the role it and its opposite (aporia). At the heart of Plato’s philosophical project is the method of the Socratic elenchus (or, logical refutation), which always precedes through a series of questions. Typically, Socratic questioning is meant to force his interlocutor to aporia (literally, ‘no passage’). The concern then tends to shift to figuring out an euporia (free passage) – after the rival hypothesis has been thus discredited.

This discreditation is not of a general kind; it is sufficient to show that, on the premises given by Socrates’ interlocutor, the hypothesis cannot hold. Consequently, euporia is not a constructive proof of Socrates’ hypothesis, but rather a demonstration that nothing prevents it from being an acceptable solution to the problem at hand, given certain assumptions both interlocutors have agreed on.

With that general structure in mind, the purpose behind certain key features of the Socratic elenchus is clear. Those features include: that all premises are to be introduced or accepted by the interlocutor, that all moves in the argument must be sanctioned by the interlocutor, that one a proposition is selected for examination, all moves are conditional on its hypothetical truth.

Situating one’s philosophy first of all not in a constructive project or a system which can stand on its own, but in the context of disagreement in such a way that it does not make much sense outside of the conversation in which it is conceived, has some interesting consequences. One is to unfetter the emotional element of disagreement in a way which modern philosophers do not.

This tendency reaches its culmination in Gorgias, when the arguments ends with Callicles moved to silence through a combination of shame and rage. Another is to emphasise the importance of persuasiveness in general; not just the persuasiveness of an argument as such, but the persuasiveness of one’s style, one’s rhetoric, one’s charisma. Philosophy, on this conception, is irrepressibly personal, libidinal and passionate.

The Method of Hypothesis in Plato’s Parmenides

This is not to say there is no constructive work going on in the Parmenides; indeed, it appears to elaborate the theory of the form extensively. All this is to say that philosophy does not prove ex nihilo, meaning ‘from nothing’, or itself suppose first principles, meaning principles from which everything else can be derived. Rather, philosophy precedes from certain convictions accepted beforehand, and pursues the principle which supports them, which may in turn be utterly different and novel.

This might nonetheless appear to be a limit on Plato’s philosophical ambition, which was to restrict what can be said and what can be claimed. But this method, the method of hypothesis, actually widens the tools of justification and the contexts in which it can be established. Subordinate hypotheses all draw their justification in relation to the overall hypothesis under consideration; the core argument, the core point of the conversation, is the only thing which matters, the upshot of which is that Plato draws his hypotheses from a striking range of different sources, including poets, myths and dreams.