HomePhilosophyParmenides: 6 Facts About His Philosophy and Legacy

One of the most influential Pre-Socratic philosophers has provided us with a model of philosophical enquiry and an approach to knowledge which continues to prove influential even to this day. 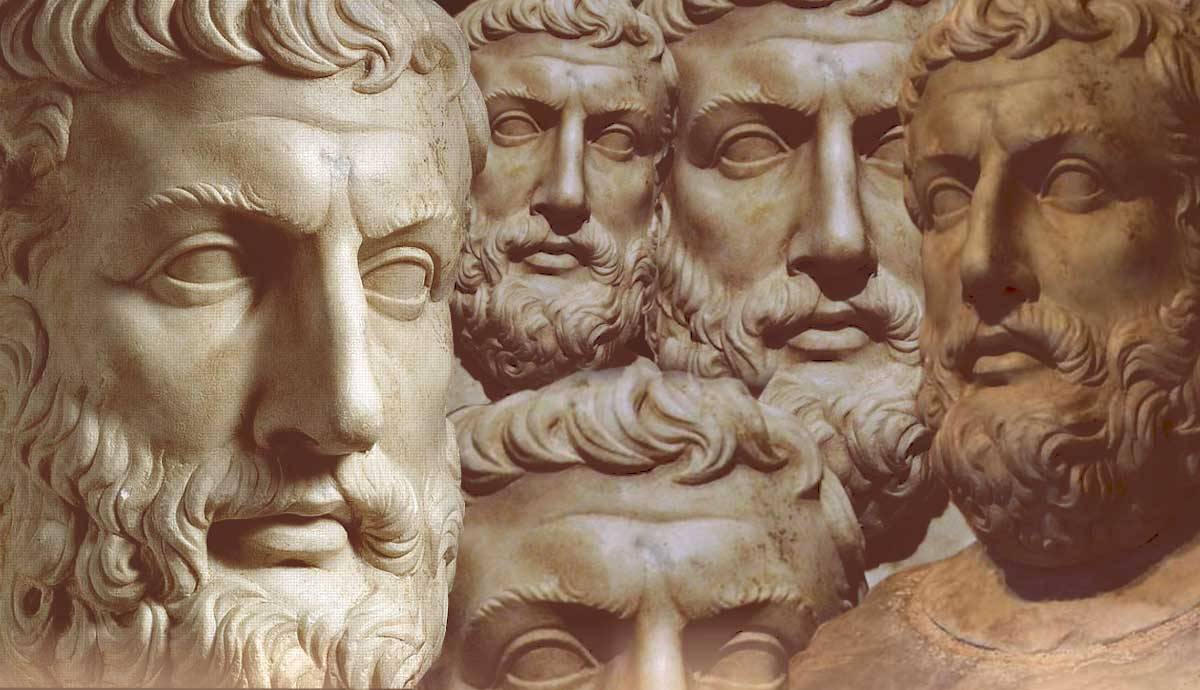 Parmenides was born in Elea, located in the southern part of Italy’s Western coast. This part of Italy was largely occupied by Greek speakers at this time. Plato’s dialogue Parmenides indicates that Parmenides was born around 510 BCE. Little is known about Parmenides’ life – reports that he wrote the laws of Elea are hard to believe, given various reports which place the founding of Elea as 25 years prior to his birth. In this article we will take a closer look at the Ancient Greek philosopher’s life and on his long-lasting influence on philosophy.

1. Parmenides Founded the School of Elea

Parmenides founded the philosophical school of Elea, and his most important pupil was Zeno, who was also widely understood to be his lover. Parmenides’ philosophical influences are obscure. One concrete forerunner of Parmenides was Xenophanes, who is known for distinguishing different forms of knowledge and belief (among other achievements). His only surviving written work is a poem allegedly titled The House of Night and Day.

Parmenides’ poem recounts what Parmenides learned from the Goddess who lives in the house of night and day. It begins with the description of his visit to the Goddess’ house “O young man, accompanied by immortal charioteers / and mares who bear you as you arrive at our abode, / welcome, since a fate by no means ill sent you ahead to travel / this way (for surely it is far from the track of humans), / but Right and Justice”. The opening of Parmenides’ poem is noteworthy for a number of reasons. The reference to ‘a fate by no means ill’ is often understood as a reference to various other mythical accounts of the House of Night and Day, most famously that of Hesiod, which present it as a place of judgement for the souls of the dead.

2. The “House of Night and Day” Is a Metaphor

The notion that the place where the dead come for judgement serves as the home of the Goddess who will enlighten Parmenides can only be understood as a claim for the eternal and unchanging veracity of his philosophy. The fact that he is described as a young man similarly suggests that Parmenides is putting distance between himself and the pre-philosophical wise men. The kind of knowledge he seeks is not the result of the aggregation of experience. The poem continues in a way which sharpens this implication, “You must needs learn all things,/ both the unshaken heart of well-rounded reality/ and the notions of mortals, in which there is no genuine trustworthiness. / Nonetheless these things too will you learn, how what they resolved”.

It is with this implicit standard for knowledge in mind that we should understand the structure of thought which Parmenides goes on to present. In the poem, the goddess begins by presenting what have come to be understood as the defining features of Parmenides’ thought – namely, the ‘Ways of Inquiry’:

Having distinguished between two ways here, the goddess appears to add a third way shortly after, specifically the path along which:

“…mortals who know nothing/ wander two-headed: for haplessness in their/ breasts directs wandering understanding. They are borne along/ deaf and blind at once, bedazzled, undiscriminating hordes,/ who have supposed that it is and is not the same/ and not the same”.

The status of this putative third way, the way in which mortals generally understand the world, isn’t clarified beyond the goddess emphasizing that Parmenides must learn it alongside the ‘unchanging’ knowledge of reality. These descriptions of the ‘Ways of Inquiry’, and just what Parmenides meant by them, have come to dominate subsequent interpretations of Parmenidean thought, and so much of our future.

4. The Ways of Inquiry Point Towards an Obvious and an Unobvious Reality

One way of understanding the contrast between the different ways of inquiry is as an attempt to distinguish the fluid presuppositions of everyday life from the reality as it is unchangingly. That is, it constitutes an argument not in favor of any particular metaphysics – to use a prominent recent definition from Adrian Moore, the most general possible attempt to make sense of things – but something which foreruns that, namely an attempt to define that attempt apart from the logic of everyday life and the assumptions of ordinary people. This is a kind of aristocratic, urbane impulse which one can recognize in many Greek thinkers, and the view that real knowledge is unobvious, subtle and distant from the assumptions which most people precede from is one of the most persisting features of Western philosophy.

Bertrand Russell, one of the most prominent British philosophers of the 20th century and well known for his philosophy of logic and mathematics (among other things), offered his own interpretation of Parmenides’ philosophy in his survey work A History of Western Philosophy. For Russell, Parmenides’ work hinges on the problem of negative existentials. To understand what this means, consider the following passage:

“When you think, you think of something; when you use a name, it must be the name of something. Therefore both thought and language require objects outside themselves. And since you can think of a thing or speak of it at one time as well as another, whatever can be thought of or spoken of must exist at all times. Consequently there can be no change, since change consists in things coming into being or ceasing to be.”

This presents Parmenides’ work as investigating a paradox, whereby thought requires some object (“you think of something”), and so it seems that whatever can be thought of “must exist at all times”. There are various ways to read this aspect of Parmenides’ thought. One, which comes from G.E.L. Owen, is to take it as a rebuke to the obviousness of change and time as distinct from a negation of change and time.

Part of Parmenides’ poem consists in a cosmology – his attempt to make sense of the structure of the physical universe, and especially the movement of heavenly bodies. This cosmology, like all traditional cosmologies, defines structure in terms of change of one kind or another. The apparent tension between this and Parmenides’ opposition to change can be resolved when one sees Parmenides’ opposition to change and time as a more contingent, instrumental kind. It is a rebuke, it is an attempt to present a difficulty for our conventional way of thinking, but it is not a negation outright.

6. Interpreters of Parmenides Think He Did Not Believe in Change

Nevertheless, Parmenides has historically been understood as a ‘monist’ – one who denies the existence of change, one who asserts the absolute oneness of things, one for whom unity is the fundamental principle of knowing true reality. Indeed, however one disputes the strength of this assertion, what cannot be disputed is that the belief that reality is unchanging at the most fundamental level is one which Parmenides articulates and considers carefully. It is to this reading of Parmenides which we must now keep in mind, because it is this reading which has proven most influential for Parmenides’ reputation and influence on Western thought.

The French philosopher Paul Ricoeur articulates one consequence of Parmenidean monism as follows:

“It is striking that Plato contributed to the construction of Euclidean geometry through his work of denominating such concepts as line, surface, equality, and the similarity of figures, etc., which strictly forbade all recourse and all allusion to manipulations, to physical transformation of figures.”

It is, in other words, a willingness to conceptualize the world as unchanging, or aspects of it as excepted from change, that allows the development of certain mathematical concepts. The claim here isn’t just that these concepts follow from a Parmenidean approach to metaphysics, but that Parmenidean metaphysics allows the creation of these concepts which in turn allow for an exceptional degree of understanding and manipulation of the world at large which human beings have ultimately achieved:

“This asceticism of mathematical language, to which we owe, in the last analysis, all our machines since the dawn of the mechanical age, would have been impossible without the logical heroism of Parmenides denying the entirety of the world of becoming and of praxis in the name of the self-identity of significations. It is to this denial of movement and work that we owe the achievements of Euclid, of Galileo, modern mechanism, and all our devices and apparatus.”

But what precisely is the logical heroism of Parmenides? The concepts which follow from Parmenidean metaphysics are then, on Ricoeur’s account, central to the intellectual developments of both mathematics and the natural sciences. If we take, as many do, at least some developments in these areas as not merely constitutive of what we concretely know, but as the exemplar of such knowledge, then at some point the hypothetical has moved into the actual.

Whether this step has to come in the metaphysics which undergirds the concept, or whether the hypothetical possibility can become concrete in its later manifestations is a matter of some dispute. What isn’t disputed is that Parmenidean thought has had an outsized influence not just on the development of philosophy, but on the intellectual development of human beings as a whole.