The term ‘cynical’ has a very different meaning today compared to its ancient roots. This article explores the fascinating school of Cynicism and its bizarre founder Diogenes of Sinope. 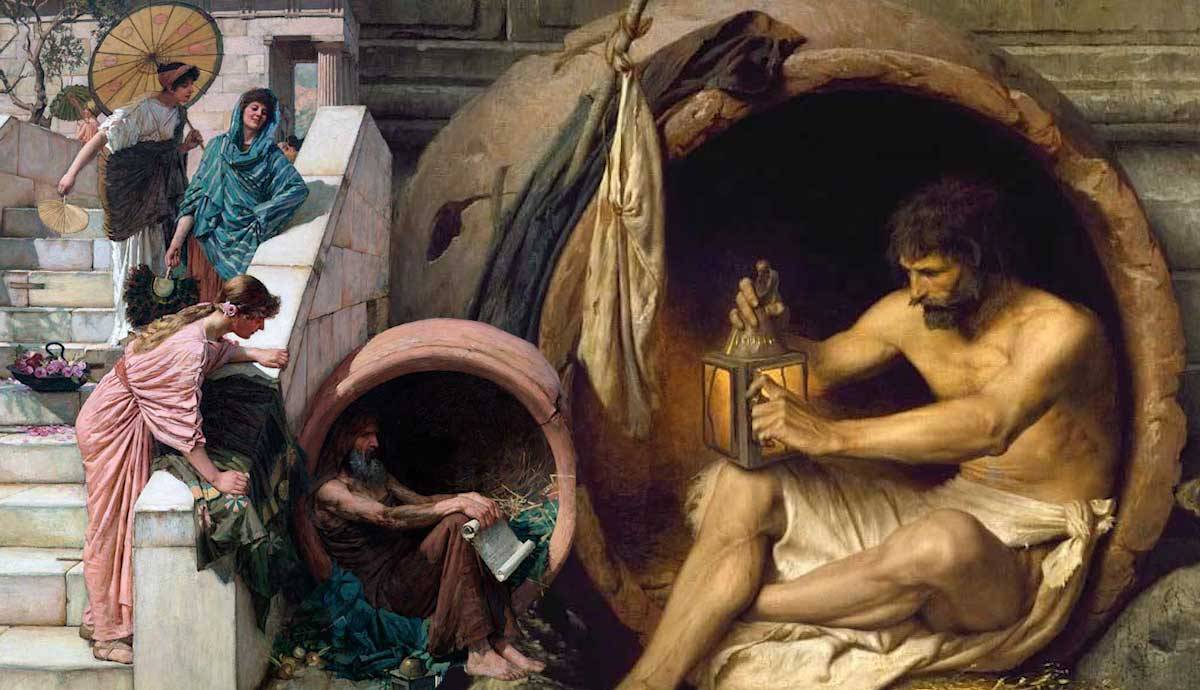 1. Diogenes of Sinope Was a Strange Man

Most of what we know about Diogenes comes from later philosophers who didn’t know him during his lifetime. Only a few scraps of information exist today, but we can still piece together some of his biography. Diogenes was likely born around 404 BC and died in 320 BC. He was supposedly one of Antisthenes’ first pupils, eventually dedicating his entire life to the practice of Cynicism.

Diogenes began this process when he first arrived in Athens after being exiled from his home town of Sinope (a coastal city in modern day Turkey). He was banished from the city for defacing coins, and arrived in Athens with no prospects and nowhere to stay.

According to one source, Diogenes wrote to a friend of his and asked if they knew of any available accommodation in Athens. But when the friend failed to respond to his letter, Diogenes simply roamed the streets. He found a large clay wine jar to shelter inside and quickly realized that he could live in the jar quite comfortably. The four walls and roof of a regular house were luxuries he could easily forego.

Diogenes spent the rest of his days living an ascetic lifestyle. One anecdote reveals that he destroyed his only possession – a wooden bowl – after seeing a peasant boy drinking water from a puddle out of his hands. Diogenes supposedly exclaimed: “Fool that I am, to have been carrying superfluous baggage all this time!”

Some of Diogenes’ behavior was less endearing. He regularly provoked irritation among the Athenian public by urinating on people who annoyed him and defecating in public places such as theaters and markets. Plato once referred to Diogenes as ‘Socrates gone mad’, a label which has stuck with the Cynic philosopher ever since. However, this has led many people to dismiss Diogenes and the Cynics as oddballs without any real philosophical ideas. This couldn’t be further from the truth. In fact, Cynicism explores very serious questions surrounding human nature, custom, happiness and shame.

2. The Meaning of the Term ‘Cynicism’ Has Changed Over the Centuries

Today, the term ‘cynical’ means something along the lines of ‘motivated by self-interest’ and/or ‘mistrusting of people and their intentions’. In other words, if somebody describes you as cynical, then it isn’t really much of a compliment! However, the term hasn’t always carried such negative overtones.

In fact, the word ‘cynical’ has long and ancient etymological roots. The word derives from Cynicism, a school of philosophy which first appeared in Ancient Greece. Back then, it referred to philosophers with a very specific set of beliefs (which we’ll explore in more detail below). Like many words, cynicism has evolved over thousands of years to mean something very different to its original use.

The word ‘cynic’ derives from the Ancient Greek kynikos meaning ‘dog-like’ or kyôn (dog). While there’s some debate about why the Cynics adopted this name, many academics believe that the word was hurled at Cynic philosophers due to their bizarre and unconventional behavior. The Cynics lived ascetic lifestyles, often dwelling in the streets and engaging in public defecation, much like dogs. Unsurprisingly, Cynicism has gained a reputation for eccentricity ever since it first appeared in Ancient Greece. So who exactly were the Cynics? And what did they believe?

3. Diogenes of Sinope and the Cynics Lived in Accordance with Nature

Throughout his life, Diogenes practiced Cynic values. Cynics believed that the main goal of life was eudaemonia or mental clarity. This could only be achieved by living in accordance with nature and embracing ascetic practices. Cynics were also strongly opposed to social conventions such as laws and customs. Diogenes and the Cynics quickly earned themselves a ‘dog-like’ reputation by putting these beliefs into practice.

For example, imagine a busy marketplace in Athens, circa 340 BC. A disheveled-looking man appears in the crowd, lifts up his robes and starts pleasuring himself in plain view of everybody else. When someone approaches him and asks what on earth he’s doing, he replies “I wish it was as easy to relieve hunger by rubbing an empty stomach.”

This is one of many shocking anecdotes that later philosophers and historians told about Diogenes. So it’s not hard to see why Cynicism has gained a reputation for eccentricity. As we will see, living life in accordance with nature means freeing oneself from any kind of public convention. In this example, Diogenes was criticising society’s unspoken role that sexual acts should only be performed behind closed doors.

4. Cynics Believed That Nature Was More Important Than Custom

Clearly Diogenes had a real problem conforming to society’s rules. Indeed, one of the reasons that his behavior shocks us is because of how much it questions the unspoken rules that we adhere to everyday. Diogenes has no regard for societal convention. For example, he sees nothing wrong with going to the toilet in public. Why? Because Diogenes believes following arbitrary rules – in this case, urinating and defecating behind closed doors – is far less important and meaningful than following nature (physis).

According to the Cynics, living according to nature and not human-created customs (nomos) is the highest form of wisdom.

Defecating isn’t considered shameful in private, so there’s no reason that it should suddenly be considered shameful in public. Humans have decided, over time, that people should go to the toilet in private, and now nobody goes to the toilet in public (if they can avoid it, that is). In many ways, this sounds like a pervert’s charter. But it does lead us to question how much of our daily lives are directed by rules that we follow blindly without question. Diogenes does not consider himself to be a madman. He believes that the rules society has created are truly mad.

5. Self-sufficiency and Shamelessness Were Key Virtues for Cynics

Self-sufficiency (autarkeia) is a vital step towards rejecting society and acquiring true happiness. Remember the clay wine jar that Diogenes chose to live inside? The philosopher realized that he could live quite happily in one without the need for a traditional home. This is partly because he believed that life should be spent in a manner closely resembling that of primitive men.

Diogenes begged for food and squatted in public buildings. He didn’t own any possessions. He did this because he believed that living according to nature would lead to true happiness (eudaemonia). Anything else was merely a distraction. Possessions, home comforts: one should reject these luxuries and cultivate self-sufficiency instead. During his lifetime Diogenes was homeless, penniless, exiled and allegedly even enslaved at one point. But despite these troubles, he insisted that he was living a good life, since he was living according to nature and therefore reason. It’s far worse to follow convention and live like everybody else, merely for convention’s sake.

The concept of shamelessness was another important step on the road towards living a truly natural life. Within the context of Cynicism, shamelessness means rejecting any laws that hold certain acts to be harmless in one setting and disgusting in another. For Diogenes, this entailed having sex in public and defecating in the local theatre during a play.

As we’ve seen already, such behavior led to his being nicknamed Diogenes “the dog” by his contemporaries. But Diogenes allegedly embraced this insult as a sign that he was doing things correctly. A dog acts on the whims of its bodily functions alone: it goes to the toilet when needed and seeks out food when it gets hungry. It has no shame. And therefore it acts in accordance with nature alone.

6. We Can Learn from Diogenes of Sinope

Unlike other philosophies such as Stoicism, it’s difficult to see how anyone could apply Cynicism to everyday life without becoming an outcast. It’s highly unlikely that anyone will read this article and then exchange all of their worldly possessions for a life on the streets. Not only that, but in our society a lot of Diogenes’ behavior is illegal, plain and simple. So how can we apply Cynicism to our own lives?

Although it seems shocking at first, we have to admit that there is a bold simplicity to Diogenes’ way of life. His commitment to pursuing the simple things in life prompts us to think about what makes us happy. To what extent can we exist without our little comforts? Diogenes is clearly free from the expectations of society. Furthermore, when we make certain purchases or express certain opinions, are we doing it because we want to? Or because of the invisible expectations society places on us? Every once in a while, it does us good to marvel at someone as extreme as Diogenes. Like a playful jester, he shows us the absurdity in our own behavior by completely overturning our conventions and what we accept as ‘normal’.

What Does ‘Cynical’ Mean Today?

It’s unclear how exactly Diogenes died. Some ancient sources suggest that he passed away after eating raw octopus, while others say he died of an infected dog bite. What we do know is that his dedication to living his philosophy wholeheartedly has drawn plenty of admirers throughout the ages. Many of the Stoics liked him, as well as plenty of Renaissance thinkers. Even contemporary authors like Oscar Wilde have been drawn to Diogenes and Cynicism.

Some experts believe that the word ‘cynical’ evolved in meaning some time around the 18th century. Various thinkers from this period admired the Cynics’ rejection of conventional societal values, particularly their criticism of greed. Over time, the word ‘cynical’ entered common parlance as a way to express ‘an attitude of jaded negativity’ with the actions and behaviors of other people. As we have seen, this narrow meaning doesn’t really do justice to the Cynical prioritization of happiness as the ultimate goal of life.