HomePhilosophyThe Life of Confucius: Stability in a Time of Change 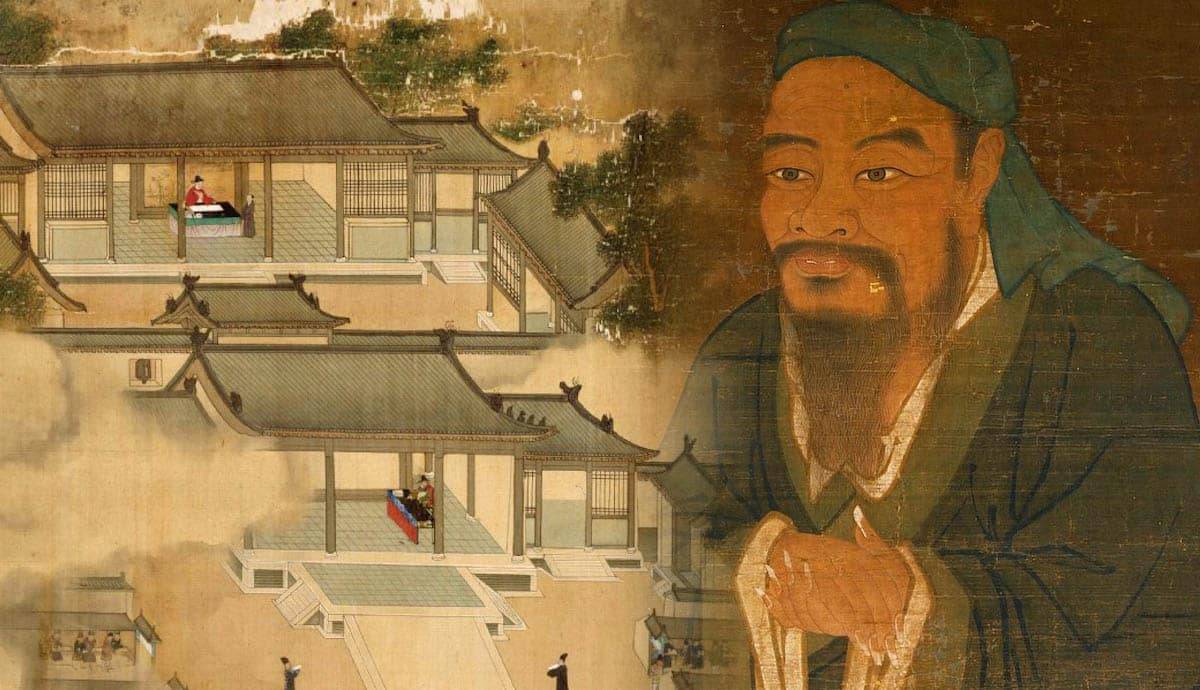 For a person who has influenced the education, thoughts, and lives of more people than anyone in history, few people outside of Asia know much about the Chinese philosopher Confucius. Not that he would have identified with the word “philosopher.” Of all the titles he has been given, he probably thought of himself more as a teacher, one who taught rulers and kings how to be better people so they could lead by example and inspire their subjects to be better people too. All of his teachings were motivated by the hope of providing stability in a time of change. His influence became so great that Confucius’ ideas have been the foundation of much of East Asian and Chinese philosophy and culture since.

Confucius was born in 551 BC, in the Lu province of eastern China, now known as Shandong. His name was originally Kong Qiu. Later his name took the suffix ~zi, which means master, so he was called Master Kong, Kong Fuzi. Confucius is the Latinised name that the Jesuit missionaries to China used in the 16th Century.

The Axial Period and the Contemporaries of Confucius

As he was born in 551 BC, Confucius was a contemporary of Siddhartha Gautama, the Buddha, who lived in India; as well as of Pythagoras, Heraclitus and Parmenides in Greece. Confucius died in 479 BC, ten years before Socrates was born. They were all part of what the German philosopher Karl Jaspers has called the Axial Period.

The Axial period centered around 500 BC. It marked the fall of the Mythical Age, the end of ancient civilizations, and the beginnings of modes of thinking that still influence and inspire us today. It is remarkable that such an outpouring of intellectual invention happened in three unconnected places at roughly the same time; all the more so because Confucius, Siddhartha, and Socrates all had the intention of helping the common person live a better life, even if they had differing ideas on how to achieve this.

One feature of the Axial Period for Jaspers was that it marked the crumbling of old, sometimes thousands of years old, civilizations such as Ancient Egypt. This is exactly what happened in China several centuries before Confucius’s time with the end of the Zhou dynasty.

The Beginnings of Chinese Dynastic Culture

The first major civilization in China that there is a record of was called the Shang. Established as a political state around 1700 BC, the Shang were the only truly literate state east of Mesopotamia and had courts, scribes, and archivists. The Shang were replaced by the Zhou around 1045 BC as the major power in China after a major battle. It is from the Zhou that many features of Chinese philosophy and culture developed.

The so-called “mandate of heaven” began with the Shang but was solidified by the Zhou. The mandate of heaven gave the rulers the right to rule only if they were righteous and ruled justly for the benefit of the whole state. If not, the will of heaven would move on and a new ruler would rise to replace the degenerates, as the Zhou claimed happened when they succeeded the Shang.

Bureaucracy, Merit, and Ritual – the Elements of the Zhou Dynasty

The Zhou state expanded right across China to the eastern coast making a state that was larger than anything that had come before it. It established the foundation of bureaucratic government and filled positions within it based on merit. Officials of the state had to be morally virtuous and prove their ability to govern, to which end books on ethics and statecraft were written to help with their training.

Rituals and rites that began under the Shang were enlarged and became a more central feature of Zhou culture. It all went to emphasize the spiritual qualities of the Zhou rulers and encouraged other states to enter peaceful relations with them. Indeed, the cultural and artistic traditions established by the Zhou not only profoundly affected the cultures and states in their vicinity but carried on long after the Zhou had stopped being a major power in China. These traditions echoed down through the centuries in Chinese philosophy to Confucius and beyond.

China at the Time of Confucius – A Fragile Stability

By the time Confucius was born, the Zhou state had been gone for over 200 years. It still existed in the east of China, but its political power had waned, and its domains shrunk. The period between 770 BC and 480 BC is known as the Spring and Autumn era. It was a time of fragile stability, with the various states that inherited the culture and territory of Zhou existing in semi-peaceful co-existence except for occasional outbursts of violence. It has been likened to a “mid-first millennium United Nations” that aimed to avoid an all-out war. Even so divided, there were many economic and cultural advances during this period, and someone like Confucius was able to travel between different states to offer his services.

Confucius’ ancestry is unclear. Some sources suggest that he may have been a distant descendent of a noble duke of the Shang dynasty, but the records are unclear, and the link was possibly apocryphal. What is clear is that his family were of the class between the aristocracy and the peasants in Lu, a middle-class, at least until his father died when he was three. Consequently, he was raised by his mother in poverty.

Confucius’ Education in the Six Arts

Confucius went to the common school and learnt the Six Arts that had been established as the basis of education by the Zhou. This consisted of Rites, Music, Archery, Chariotry, Calligraphy and Mathematics, and would later be incorporated into Confucian philosophy. After he graduated, Confucius worked in various minor official positions as a bookkeeper, a cattle herder, and a manager of granaries.

“I was of humble station when young. This is why I am skilled in many menial things.”
(The Analects, book IX)

Through a connected friend, he was also able to access a library and continue studying. And it seems he studied a lot about the history, ethics, rites, and rituals of the ancients, which for him were the Zhou and Shang. This laid the foundations of his philosophy, which seeks to bring stability by teaching people how to live together.

Benevolence as the Core of Confucius’ Philosophy

The core of Confucius’ philosophy revolves around what is called “ren”, which means benevolence or humanity. He didn’t have much to say about metaphysical or spiritual things. He didn’t deny the existence of spirits or ghosts or the afterlife, but he made it clear that they had no place in his philosophy. He was only concerned about human relationships and all ethical considerations flowed from considering how to treat other people.

Like Aristotle, Confucius thought that people had to develop virtues to live well within society. Whereas Aristotle aimed at a state, eudaimonia, Confucius aimed at a particular kind of ideal moral character called a gentleman, junzi, or better yet a sage. In order to become a gentleman, a person had to develop several moral characteristics. The primary characteristic was benevolence, kindness towards another person. This meant considering what was good for that person from their perspective not your own. You had to be unselfish and then make moral judgements after considering both your viewpoint and that of the other person.

The other characteristics of a gentleman were righteousness, ritual propriety, wisdom, and trustworthiness, but they all followed the idea of consideration for others.

The power of Ritual in Developing Moral Character

Confucius’ ideas regarding ritual are fascinating. In this respect, he was a conservative as he encouraged people to follow the rituals and rites that were established by the Zhou several centuries earlier. He found value in them primarily because they instructed people in how to behave towards each other, and when done with the proper intention helped people develop moral character. Rituals were the rules of etiquette for the gentleman, but they had to be done with the proper emotional content behind them.

The Political Application of Confucius’ Ideas

Benevolence, a life of virtue and ritual propriety had important implications for Confucius’s political philosophy. He strongly believed and advocated that leaders should lead by example. They should lead a virtuous life and treat their subjects with benevolence. In this way, people would follow their leader out of respect, admire him and try to emulate his behavior. He thought that controlling a state through fear and threats of violence was not only immoral but didn’t work. Confucius noticed that most leaders didn’t live up to this high standard.

Confucius as a Wandering Sage

The fact that leaders did not seek to be benevolent seems to be one reason why Confucius left his official position at the Lu court around 497 B.C. He had become a trusted and respected advisor to the Duke of Lu by this point, but – as the story goes – the duke received a gift of dancing girls from the duke of another state, Ch’i, and disappeared from the court for three days, neglecting his official duties. Confucius was so disappointed at this lack of respect for office and Lu’s lack of moral character that he left the court and decided to wander China as a travelling teacher.

From this point on, it is unclear exactly where Confucius went or what he did. Sources suggest that for the next thirteen years he travelled around and visited several other provinces offering his advice and services to the various courts, all with the intent of teaching people how to live together. He was likely quite well-known and revered by this point and no doubt many leaders and disciples sought him out to get his advice or learn from him. It is during this time that his reputation as a great teacher of Chinese philosophy solidified.

Confucius never wrote down what he taught. He returned to Lu in 484 BC and remained there until he died in 479 BC. It was only after he died that his students gathered a collection of Confucius’ teachings and sayings in the book that we now know as the Analects. It is because of this book and later writings by people such as Mencius that Confucius’ reputation and influence in Chinese philosophy grew after his death.

Soon after Confucius died, what he had feared and worked against occurred: chaos. China descended into the bloody Warring States period that lasted another 200 years until the first Chinese empire was established by the short-lived Qin. It was under the Han, who succeeded the Qin, that Confucius’ ideas were rediscovered, venerated, and disseminated, becoming a core part of Chinese philosophy and political thinking for the next 2,000 years.

10 Ancient Egyptian Inventions That Will Surprise You