HomePhilosophyIs Buddhism a Religion or a Philosophy?

Some people view Buddhism as a religion, while others call it a philosophy. This article explores whether or not it can ever truly be classified. 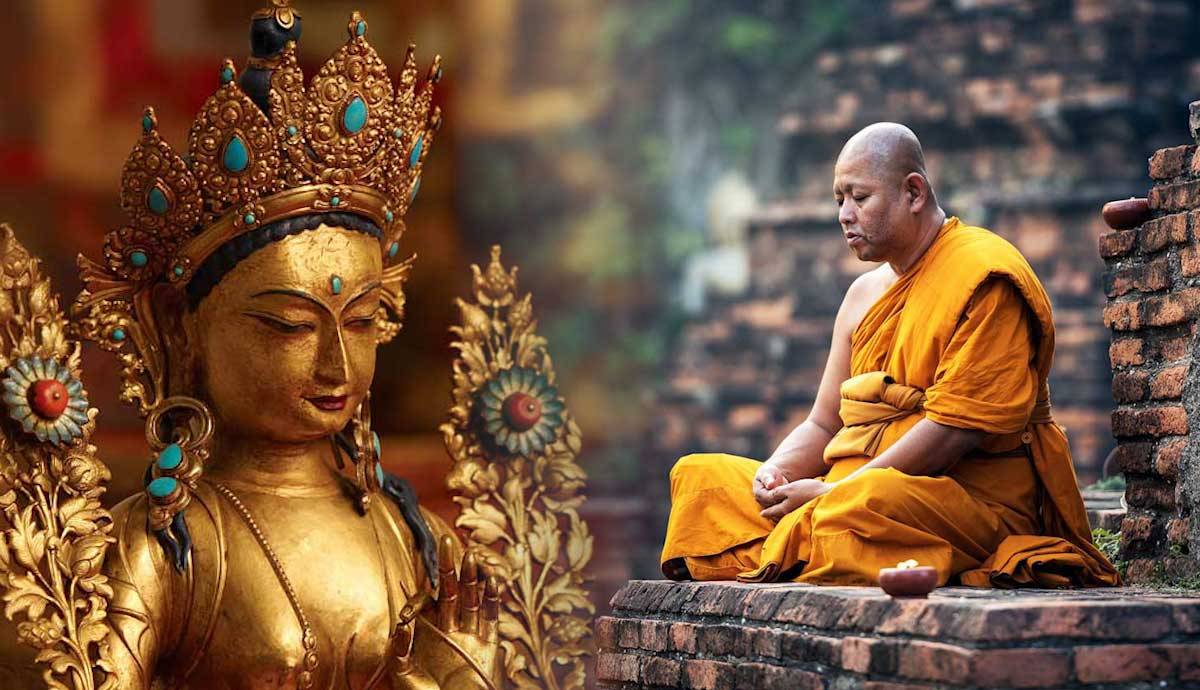 Buddhism is the world’s fourth most popular religion, with over 507 million followers worldwide.  Traveling around India, China and other traditionally Buddhist countries reveals ornate temples, Buddha  shrines and devout followers (much like many of the world’s other great religions!).

However, Buddhism is also frequently referred to as a philosophy, particularly by people in the West. It  shares many teachings in common with other popular schools of thought, such as Stoicism. And Buddha  himself emphasized the practical nature of his ideas, favoring philosophical enquiry over religious dogma.

All this begs the question: is Buddhism a philosophy or a religion? This article explores why and how  Buddhism means different things to different people, and whether or not it can ever be truly classified as  one thing or the other.

Is Buddhism a Religion or a Philosophy? Or Both?

Buddhism first originated in India in the 6th century BC. It is a non-theistic religion i.e. it doesn’t believe  in a creator God, unlike theistic religions such as Christianity. Buddhism was founded by Siddhartha Gautama (also known as Buddha) who, according to legend, was once a Hindu prince. However, Siddhartha eventually decided to give up his wealth and became a sage instead.

He came to this decision after gaining an awareness of human suffering and the pain it causes people. Consequently Siddhartha led an ascetic lifestyle. He devoted himself to developing a belief system which

could teach others how to escape samsara, a Sanskrit word which describes the “suffering-laden cycle of  life, death, and rebirth, without beginning or end” (Wilson 2010).

Despite its popularity today, Buddhism was slow to gain followers at first. During the 6th and 5th century BC, India was undergoing a period of significant religious reform. Buddhism developed in response to the  supposed failure of Hinduism to adequately address the needs of everyday people. But it was only in the  3rd century BC that the religion gained traction. Indian Emperor Ashoka the Great adopted Buddhism  and consequently it spread rapidly through the Indian subcontinent and Southeast Asia.

As stated above, Buddha began to develop his teachings after realizing the true scale of suffering in the world. In particular, he realized that because of human mortality, everything he loved would eventually die  (including himself). But death isn’t the only suffering in human life. Buddha believed that humans suffer  at birth (both the mother and the baby), and throughout life due to desire, envy, fear etc. He also believed  that everyone was reincarnated in the samsara and doomed to repeat this process forever.

These truths provide the basis for the entire purpose of Buddhism, which is to find the path away from craving and suffering through enlightenment.

The ‘Philosophical’ Aspects of Buddhism

Already we can see some philosophical aspects of Buddhism beginning to emerge. The Four Noble Truths above sound remarkably similar to typical logical reasoning involving premises and relations between premises.

But perhaps the most concrete philosophical elements to this religion come from Buddha himself. Rather than imploring his followers to follow his teachings to the letter, Buddha encourages people to investigate  them. Buddhist teachings, otherwise known as Dharma (Sanskrit: ‘truth about reality’), contain six  distinct characteristics, one of which is Ehipassiko. This word is used all the time by Buddha and literally  means “come and see for yourselves”!

He strongly encouraged people to engage in critical thinking and draw on their own personal experience  to test what he was saying. This type of attitude is extremely different to religions such as Christianity and  Islam, where followers are generally encouraged to read, absorb and accept scripture unquestioningly.

It’s also important to note that Buddha’s teachings have spurned a distinct philosophical tradition. As  people began to write down his lessons in the centuries after his death, differing interpretations rose up  among diverse philosophical groups. At first, the people debating Buddhist teachings employed standard philosophical tools and techniques to make their point. However, their reasoning was underpinned by a  total belief that whatever Buddha said was right and true. Eventually, people from distinct but related Asian religions began to analyze Buddhist teachings, forcing Buddhists to branch out into traditional areas of philosophy (e.g. metaphysics, epistemology) to prove the value and worth of Buddhism to other people who didn’t consider Buddha’s teachings as authoritative.

The ‘Religious’ Aspects of Buddhism

Of course, there are plenty of religious aspects to this religion also! We’ve already seen that Buddha believes in reincarnation, for example. He describes how when someone dies, they are reborn again as  something else. What an individual is reborn as depends on their actions and how they behaved in their  previous life (karma). If Buddhists want to be reborn into the realm of humans, which Buddha believes is  the best one to achieve enlightenment, then they must earn good karma and follow Buddha’s teachings.  So even though Buddha encourages critical enquiry, he also provides an excellent incentive to follow what  he is saying.

Many world religions also offer some sort of ultimate reward for its followers to try and aim for  throughout their lives. For Christians, this is reaching Heaven after death. For Buddhists, this is a state of  enlightenment known as nirvana. However, nirvana is not a place but rather a liberated state of mind. Nirvana means that someone has realized the ultimate truth about life. If an individual achieves this state  then they have escaped the cycle of suffering and rebirth forever, because in their enlightened mind all the  causes of this cycle have been eliminated.

There are also many Buddhist rituals and ceremonies that form an important part of worship for many  people around the world. Puja is a ceremony in which followers will typically make offerings to Buddha. They do so in order to express their gratitude for Buddha’s teachings. During puja followers may also  meditate, pray, chant and repeat mantras.

This devotional practice is performed so that followers can open themselves up more deeply to the  teachings of Buddha and nurture their religious devotion. Unlike some religions, in which ceremonies  must take place under instruction from a religious leader, Buddhists can pray and meditate either in  temples or their own homes.

Why Do We Need to Classify Buddhism as a Religion or Philosophy?

As we can see, Buddhism contains many characteristics which blur the lines between philosophy and  religion. But the idea that we need to distinctly classify it as one thing or the other tends to arise within Western societies far more than in other parts of the world.

In the West, philosophy and religion are two very distinct terms. Many philosophies (and philosophers)  within the Western tradition would not have considered themselves to be devoutly religious individuals. Or if they did, contemporary followers have managed to successfully extricate the philosophical from the  religious aspects of a particular school of thought.

Many people who consider themselves atheists or agnostics tend to favor ignoring the religious aspects of Buddhism, for obvious reasons. After all, Buddhist teaching fits easily within the mindfulness, meditation  and yoga movements which have gained in popularity in Western countries over the last few decades.  Sometimes these teachings are appropriated without a proper understanding of their roots, as when  people post Buddha quotes on social media or claim to be interested in Buddhism without having studied any of its key texts.

The truth is that Buddhism is both religion and philosophy, and the two aspects of its teachings can co exist in relative peace. People interested in Buddhist philosophy can easily study it as a school of thought, as long as they don’t try to deny that there are more supernatural elements contained within Buddha’s teachings. Buddhist monks, temples and religious festivals exist for a reason. Ceremony and ritual is an extremely important aspect of Buddhism to millions of people around the world. But equally, it is possible for an atheist to follow plenty of Buddha’s teachings without also feeling obliged to carry out acts of worship.