From the 32 cultural heritage sites in India, here are 10 locations that stand as evidence of the fascinating history of India and attract visitors from all over the world. 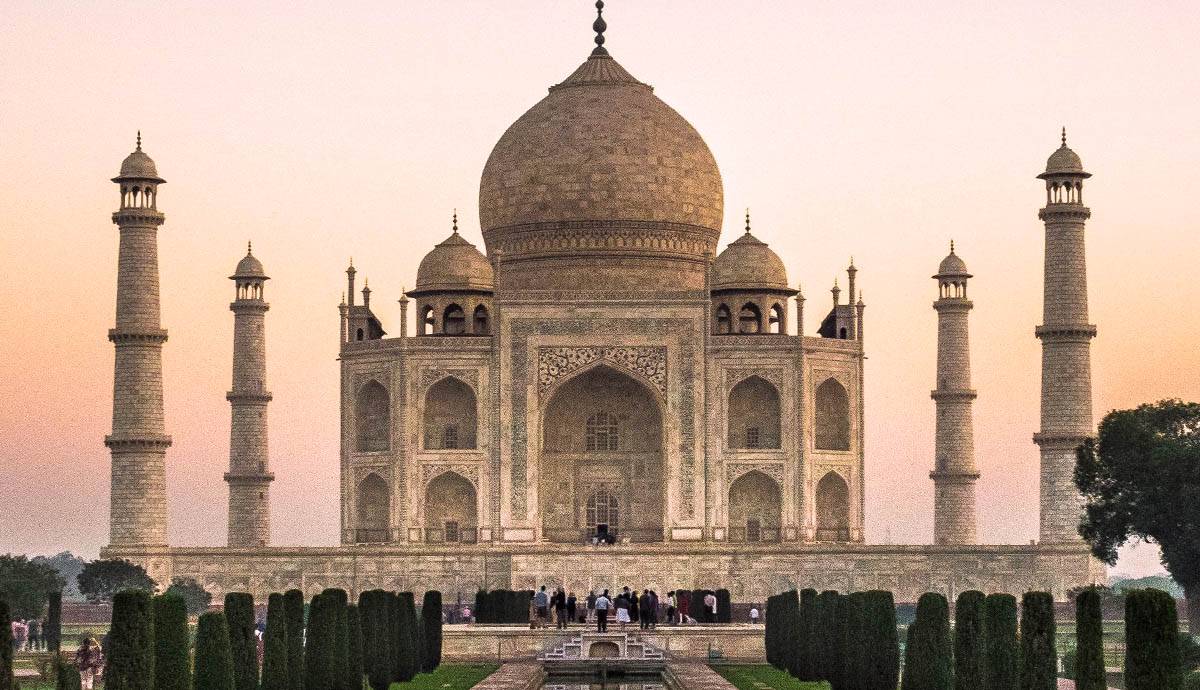 The cultural heritage sites in India, which have been designated a World Heritage Site by UNESCO (United Nations Educational, Scientific and Cultural Organization), are unique examples of architecture and sculptural art that still bear witness to India’s spectacular history. Currently, there are 40 UNESCO World Heritage sites in India from which there are 32 cultural, 7 natural and 1 declared mixed property. This article will cover ten magnificent cultural sites.

The caves at Ajanta are located on a horseshoe-shaped hill in the Waghora River belt in the Indian state of Maharasthra and they are one of the oldest UNESCO World Heritage sites in India. There are thirty sculpted and painted caves in Ajanta that represent a series of works of outstanding artistic and religious significance. The first Buddhist temples in the Ajanta Caves date from the 2nd and 1st century BC, while the others date from the Gupta period (5th and 6th century AD). They contain many remarkable illustrations of Jataka, a sacred text that recounts episodes from Buddha’s life in the many incarnations he experienced on his journey to enlightenment.

The Caves were home to a community of monks from the second to the sixth century AD. Some of the caves were temples (chaitya) and others monasteries (vihara). In addition to the architectural features and sculptures that complement the paintings, the iconographic combination of paintings is also important. The refined lightness of the decorations, the balance of the composition, the beauty of the female figures place the paintings in Ajanta among the greatest achievements of the Gupta period and the post-Gupta style.

Ellora caves include 34 monasteries and temples rock-cut in a wall of a high cliff made of basaltic rock more than 2 kilometers long. They are located not far from Aurangabad in Maharashtra. The art created in the UNESCO World Heritage site known as Ellora Caves dates from the 6th to the 12th century AD. They are important not only because of their unique artistic achievements but also because of the shrines dedicated to Buddhism, Hinduism, and Jainism, which illustrate the spirit of tolerance characteristic of ancient India.

From the 34 temples and monasteries, 12 are Buddhist (5th to 8th century), 17 Hindu located in the central part (7th to 10th century), and 5 Jain located in the northern part of the site and date to a later period (9th to 12th century). These caves are remarkable for their astounding reliefs, sculptures, and architecture and contain some of the most beautiful works of Indian art during the Middle Ages which made them in 1983, along with Ajanta caves, one of the first heritage sites in India.

The Red Fort Complex is located in the city of Agra in the Indian state of Uttar Pradesh, located 2.5 kilometers away from the Taj Mahal. The outstanding fort is made out of strong red sandstone and encompasses the entire Old City, which was the capital of the Mughal Empire in the 16th century. Most of the fort was built during the reign of Emperor Akbar when he declared Agra his capital, and it took on its present appearance during the time of Akbar’s grandson Shahan Jahan who built the Taj Mahal for his wife at the time. It was built for eight years and was completed in 1573.

The fort holds an area of ​​more than 380,000 m2 and it was built of red sandstone. Like the fortress in Delhi, this fortress is one of the most representative symbols of the Mughal Empire. Apart from Mughal architecture and planning, a fusion of Timurid, Hindu, and Persian tradition, there are also structures dating from the British period and their military use of the forts. The fort was designated a UNESCO World Heritage site in 2007. Today it is partially used as a tourist attraction while the other part is used for military purposes.

This truly colossal structure, despite its height and width of over 73 meters, seems like a “white weightless cloud rising above the ground.” The Taj Mahal complex is considered to be the greatest architectural achievement in Indo-Islamic architecture. It was built by the ruler Shah Jahan for his wife Mumtaz Mahal who died after giving birth to her 14th child. The construction of the Taj Mahal lasted from 1631 to 1648. Approximately 20,000 stone carvers, masons, and artists from across India were employed to build it on the banks of Agra’s Yamuna River.

The Taj Mahal complex can be divided into five parts: a riverfront terrace, which includes a mausoleum, mosque, and jawab (guest house), Charbagh gardens containing pavilions, and Jilauhanu (forecourt) with two auxiliary tombs. In front of the forecourt is Taj Ganji, originally a bazaar, and across the river Yamuna is the Moonlight Garden. The main chamber contains the fake decorated tombs of Mumtaz and Shah Jahan. Since Muslim tradition forbids decorating graves, the bodies of Jahan-shah and Mumtaz are placed in a relatively ordinary chamber located below the room with cenotaphs. The monumental, perfectly symmetrical Taj Mahal complex and fascinating marble walls of the mausoleum with inlaid semi precious stones and various decorations make it the most famous heritage site in India.

Among known materials and philosophical contributions of India, there is Jantar Mantar, an astronomical observation site built in the early 18th century in Jaipur. This astronomical observatory and UNESCO World Heritage site is one of the five observatories built in west-central India by Maharajah Sawaii Jai Singh II, the ruler of the kingdom of Amber. Passionately interested in mathematics and astronomy, he incorporated elements from early Greek and Persian observatories into his designs. There are about 20 main instruments designed for the observation of astronomical positions that represent one of the most significant and best-preserved historic observatories in India. This heritage site also shows fascinating astronomical skills and cosmological concepts of the court of Maharajah Sawaii Jai Singh II of Jaipur from the end of the Mughal period.

The Sun Temple at Konârak, also known as the Black Pagoda, is a Hindu temple built during the kingdom of Orissa from 1238 to 1250 in Konârak, a place in the Indian state of Odisha, on the east coast of India. It was built during the reign of King Narasingha Deva (1238-1264). The temple represents the chariot of the sun god Surya, who according to Hindu mythology travels through the sky in a chariot drawn by seven horses.

On the north and south sides there are 24 wheels 3 meters in diameter with engraved symbolic motifs which, together with the number of horses, refer to the seasons, months, and days of the week. The entire temple is aligned along the path of the sun across the sky, in an east-west direction, and divided into various organized spatial units. The harmonious integration of architecture with the decorative reliefs of naturally carved animal and human figures makes it a unique temple in Odisha and one of the cultural heritage sites in India. According to the Ministry of New and Renewable Energy Konark will run on solar energy in the coming times. The innovative scheme is in line with the Government’s vision to transform the ancient Sun Temple in Odisha and the historic Konark Town into Surya Nagri (solar city).

7. Group of Monuments at Hampi

Hampi is a village located in the Indian state of Karnataka. From the 14th to the 16th century, Hampi was the capital of the Vijayanagar Empire and a center of religion, trade, and culture which makes it one of the greatest heritage sites in India. After the Muslim conquest in 1565, Hampi was looted, partly destroyed, and abandoned but some of its great architectural achievements are still preserved. In addition to temples and shrines, a complex of public buildings (forts, royal architecture, pillared halls, memorial structures, stables, water structures, etc.) was also included in the massively fortified capital that indicates a highly evolved and multi-ethnic society. Fascinating details about Hampi’s landscape are certainly seen in the boulders that were once part of gigantic granite monoliths. The monuments in Hampi are considered to be the original Hindu architecture of southern India, but with strong influences of Islamic architecture from the north.

The Archaeological Society of India is still conducting excavations in the area, regularly discovering new objects and temples. While I visited the site in 2017 the authorities decided to finally put control on the informal tourism sector which also resulted in a significant number of residents being evicted. Today, sand mining, road work, increased vehicular traffic, illegal constructions, and floods threaten the archeological sites.

One of the holiest sites related to the life of Lord Buddha, the place he attained Enlightenment, is the Mahabodhi Temple Complex at Bodh Gaya in Bihar. The temple was first built by Mauryan emperor Ashoka in the 3rd century BC while the present temple dates from the 5th and 6th century AD. The temple is mostly made of bricks covered with stucco and is one of the oldest brick temples in India. Apart from the temple, the complex includes the vajrasana or diamond throne of Buddha, the sacred Bodhi tree, Lotus Pond or the meditation garden, and other sacred sites surrounded by ancient votive stupas and shrines.

Although Bodh Gaya is a small village, it has temples and monasteries from other nations that have a Buddhist tradition like Japan, Thailand, Tibet, Sri Lanka, Bangladesh, etc. The Mahabodhi Temple Complex at Bodh Gaya, one of the most important heritage sites of India, today stands as one of the holiest places of Buddhist pilgrimage.

9. Churches and Convents of Goa

In 1510, the Portuguese explorer Alfonso de Albuquerque conquered Goa, an Indian federal state located on the west coast of the Indian subcontinent. Goa remained under Portuguese rule until 1961. In 1542, the Jesuits came to Goa, when Francis Xavier became the patron saint of the place and began the baptism of the inhabitants and the building of churches. Among the 60 churches built, seven major monuments survive. The chapel of St. Catherine (1510), the church and monastery of St. Francis of Assisi (1517), and the church of Bom Jesus (1605), where the remains of Francis Xavier are kept, are some of the most beautiful examples. This former center of the Portuguese Empire illustrates the evangelization of Asia with its monuments that had an impact on the spread of the Manueline style, mannerism, and baroque to all Asian countries where missions were established.  The unique Indo-Portuguese style of the Churches and Convents of Goa makes it one of the fascinating heritage sites in India.

Khajuraho is located in the northern Indian state of Madyhya Pradesh and contains over twenty temples in Nagara-style temple architecture dating back to the 10th and 11th centuries which make it one of the heritage sites in India. Of the many temples built in Khajurah during the Chandella period, only 23 have been preserved and are located within an area of ​​about 6 km².

The temples are built of sandstone, and each consists of three main elements: the entrance (ardhamandapa), the ceremonial hall (mandapa), and the sanctuary (garbhagriha). The UNESCO World Heritage site of Khajuraho is divided into two areas where the main groups of temples are located, the western one which includes Hindu temples, and the eastern one with Jain temples. The temples are also filled with rich reliefs influenced by the Tantric School of Thought. They depict all aspects of life, including erotic ones (which get most of the attention), since according to Hindu and Tantric philosophy, nothing exists without the balance of the feminine and masculine principles.

The God Dionysus in India: The Epic You’ve Probably Never Heard Of