Get to know the generations of African-American women who create the world-famous Gee’s Bend Quilts. 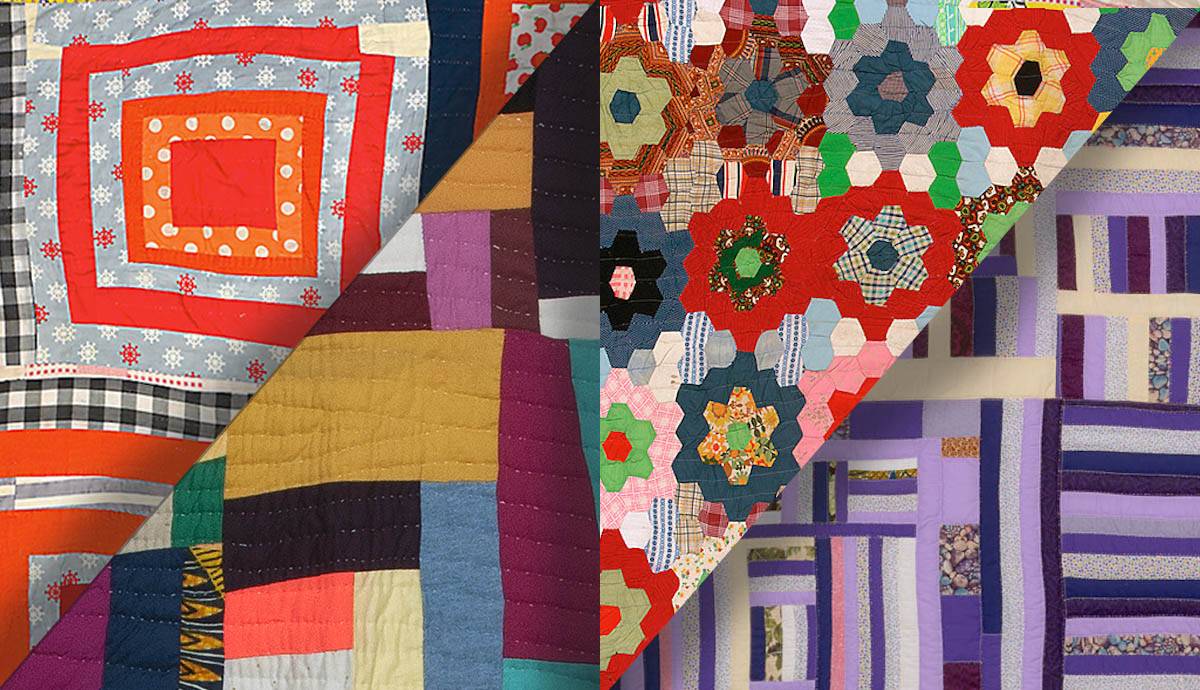 Quilting, or the stitching together of various layers of textiles and padding, is a creative process that dates back thousands of years. While the practical purpose of quilting is to provide warmth and protection, quilts throughout history have typically included decorative elements regardless of their necessity. Among the most recognizable and beloved blankets in the world are those made by the Gee’s Bend quilters, a collective of Black women in the American South who have been quilting for several generations. Explore the rich history, community traditions, and distinctive craftsmanship that is thoughtfully and expertly stitched into each one of the Gee’s Bend quilts.

The History of Gee’s Bend Quilts

In the American South, the history of quilting is intertwined with the history of generations of African-American women in the small town of Gee’s Bend. Southwest of Selma in the Black Belt of Alabama, and surrounded on three sides by the Alabama River, Gee’s Bend is a rural community with fewer than one thousand residents.

In part, the uniqueness of the Gee’s Bend quilters is due to the unusual geographic isolation of their community. During the Great Migration in the early- to mid-1900s, residents of Gee’s Bend remained in rural Alabama instead of moving north to participate in industrialization and the mainstream art world.

In the 1960s, at the height of the Civil Rights Movement, Martin Luther King, Jr. visited Gee’s Bend and inspired residents to take the ferry to the county seat and register to vote. In response to the influx of Black voter registrations, white supremacist authorities eliminated the Gee’s Bend ferry service, which isolated the town from many essential goods and services. Ferry service wasn’t restored to Gee’s Bend until forty years later in 2006.

With geographic and social isolation came artistic isolation. The tradition of quilting in Gee’s Bend began before the emancipation of enslaved people in the 19th century and was passed down from mothers to daughters by generations of Gee’s Bend women, most of whom remained in the community and made quilts throughout their entire lives. This is why the distinctive style of Gee’s Bend quilts has persisted for decades.

The Gee’s Bend Quilts at a Glance

The expertly crafted Gee’s Bend quilts are known for their bold and improvisational use of color, geometry, and mixed materials. Every Gee’s Bend quilt is unique yet belongs to the same aesthetic family. Quilters typically utilize a variety of recycled textiles to make their quilts, including used clothing, upholstery, feed sacks, and leftover fabric scraps from other projects. They don’t typically follow a strict quilting pattern but do gather inspiration from fellow quilters in the community. “We didn’t have no museum in Gee’s Bend, but we would go from house to house looking at quilts and getting ideas about how I would like to lay mine out,” said quilter Mary Lee Bendolph. “People go from museum to museum checking out other people’s work. Sometimes they like it, sometimes they don’t. They go home and try to make it, too. I think that was the same thing we was doing.”

Piecing together found materials and creative inspiration from the community was an approach to quilting born out of necessity when access to new materials was limited and the town of Gee’s Bend was geographically isolated. But over the decades, this process has blossomed into a way for the quilters of Gee’s Bend to honor their ancestors and their community by literally and figuratively stitching them into their quilts. It has also blossomed into what is now rightfully considered to be a significant movement in the history of American art.

The Generations of Gee’s Bend Women Who Passed Down Quilting

Gee’s Bend quilter Menzies Lee Pettway said, “A lot of people make quilts just for to keep you warm. But a quilt is more. It represents safekeeping, it represents beauty, and you could say it represents family history.” Indeed, the tradition of quilting in Gee’s Bend is rooted in family history. Quilting has been passed down from mothers to daughters in Gee’s Bend since before the emancipation of enslaved African-Americans in the American South in 1862, and many Gee’s Bend quilters living today trace their ancestry—and their quilting tradition—back to people who were enslaved on the Pettway Plantation. After emancipation, many stayed on the plantation and continued passing down the Pettway name.

What is extraordinary about the Gee’s Bend quilters is that three or four generations of women from the same family will have made quilts over the decades—a phenomenon rarely seen in art movements. Mary Lee Bendolph, one of the most beloved living Gee’s Bend quilters, was taught by her mother, Aolar Carson Mosely, and later taught her own daughter, Essie Bendolph Pettway, the same traditions and techniques that were passed down from their enslaved predecessors. “We got a big family spread out down here making quilts,” said Bendolph, who today continues to make quilts, exhibit her work, and keep records of the ongoing history of her community.

“I never did like the book patterns some people had…I work it out, study the way to make it, get it to be right, kind of like working a puzzle,” explained quilter Annie Mae Young. The quilters of Gee’s Bend gain technical expertise from a lifetime of practicing their craft and carefully observing the processes and finished products of their fellow quilters. Instead of following a written pattern, the quilters rely on intuition while improvising their own complex versions of simple templates. “We was taught there’s so many different ways to build a quilt,” said Menzies Lee Pettway. “It’s like building a house. You can start with a bedroom over there, or a den over here, and just add on until you get what you want. Ought not two quilts ever be the same.”

The simple starting concept of squares within squares has lent itself to unlimited creativity and complexity for generations of Gee’s Bend quiltmakers. A key iteration that came from this approach is the “Housetop” quilt, which features blocks composed of concentric squares. The “Housetop” quilt template is relatively simple but provides endless possibilities. It begins with a single central panel that is surrounded by rectangular pieces of fabric—connecting short ends to long ends—to form a continuous frame around the center until the block is declared complete by the artist. After enough blocks are made, they are joined together however the individual artist sees fit to form the finished product.

Until somewhat recently, many surveys of American art history—as well as the mainstream art market—neglected the important artistic contributions of craftspeople and artists of color. In the decades before historians and collectors acknowledged the cultural legacy of Black women and craftspeople within the American art history canon, the Gee’s Bend quilters nonetheless gained recognition, and eventually compensation, for their work.

In 1966, the Freedom Quilting Bee was established by a collective of Black quilters in the Alabama Black Belt—including several from Gee’s Bend—to bring economic advancement to their communities and to advocate for civil rights. Through the Freedom Quilting Bee, the Gee’s Bend quilts captured national attention and even helped inspire a widespread interest in using quilts in interior decorating.

In 2002, an exhibition titled “The Quilts of Gee’s Bend” debuted at the Museum of Fine Arts in Houston. This exhibition, which was the first to curate the Gee’s Bend quilts in a museum setting, later traveled to several major art institutions across the United States. In 2003, the Gee’s Bend Collective was formed, which includes over 50 quilters. Together, this group has marketed, exhibited, and sold quilts around the world. They also helped raise the attention and funds necessary to restore ferry service to Gee’s Bend. In 2015, three Gee’s Bend quilters—Mary Lee Bendolph, Lucy Mingo, and Loretta Pettway—were jointly awarded a National Heritage Fellowship by the United States National Endowment for the Arts, which is the highest government honor for folk artists. Now, the Gee’s Bend quilters remain key contributors to the vast and varied landscape of Black contemporary art in America.

Gee’s Bend Quilts Today: The Quilt as a Cultural Document

The cultural impact of the Gee’s Bend quilts is so immense that it would be difficult to find a contemporary quilter who is not in some way inspired by them. Today, the Gee’s Bend quilts have been admired all over the world, and over twenty major art museums have added at least one Gee’s Bend quilt to its collection. In February 2021, the Gee’s Bend quilters began selling their creations on Etsy in celebration of Black History Month. Currently, a Gee’s Bend quilt can sell for as much as $20,000, but a variety of products at a wide range of prices—recently including a selection of pandemic-friendly quilted face masks—are available to purchase online directly from the quilters themselves.

From 19th-century bed linens to 21st-century museum collectibles, the quilts of Gee’s Bend represent the lived experience of several generations of Black women in the American South. Gee’s Bend quilter Mary Lee Bendolph said, “Life is like making a quilt….Quilting ain’t easy. It takes work. It takes time. It takes faith. It takes a mind to do it. It takes patience….Sometimes it won’t work, but you have to keep on and go on anyhow because you need to do that to help you go through life.”

12 Must-See Artworks at the Museum of Modern Art