HomeArtistsInside The Fascinating World Of Henry Darger And Outsider Art

Inside The Fascinating World Of Henry Darger And Outsider Art

Renowned as one of the quintessential "outsider artists," Henry Darger is a masterful storyteller whose artworks were influenced by his own mental health and upbringing. 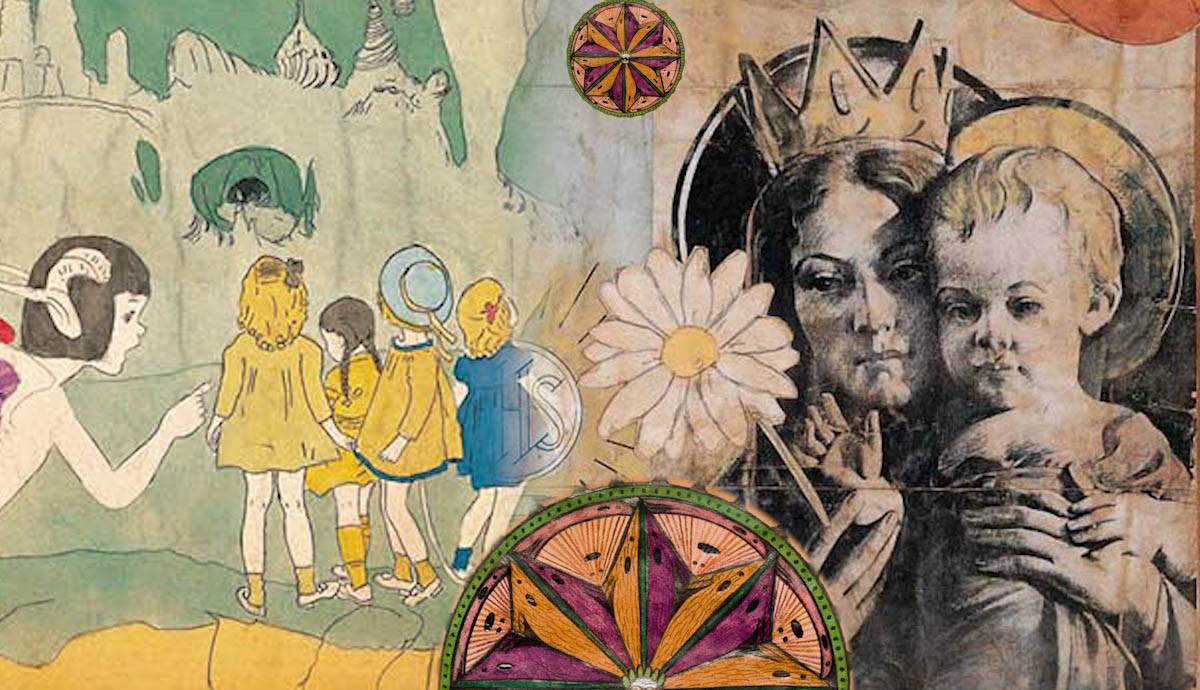 Think of illustrations of fantastical winged creatures with curling tails, flying overhead of androgynous children populating colorful and epic landscapes. It was this curious world that was accidentally discovered in 1973 when the graphic designer Nathan Lerner was cleaning the lodgings of a former tenant. The former tenant was a man named Henry Darger, who left the place and moved into residential accommodation for the elderly. Here, he spent his final days and died just six months later. Prior to his death, Darger lived a solitary, unassuming life as a janitor at various hospitals and churches, where he was known as a pleasant if slightly eccentric character. Read on to learn more about the outsider artist Henry Darger.

Upon clearing Henry Darger’s room, Nathan Lerner was amazed to discover an extraordinary amount of artwork and accompanying literature that Darger worked on his whole life. All of these things were placed amongst the peculiar clutter that Darger left behind that included hundreds of Pepto-Bismol bottles, old newspaper clippings, and nearly one thousand balls of string.

Darger’s final work titled The Story of the Vivian Girls, in What is Known as the Realms of the Unreal of the Glandeco-Angelinnian War Storm, Caused by the Child Slave Rebellion is arguably his best and most renowned work. This particular work, believed to date back to as early as 1909, consists of twelve volumes spread out over a remarkable 19,000 pages and 300 paintings. The story that unfurls throughout this series tells a narrative that is now understood as heavily influenced by the Civil War.

Today, Henry Darger is renowned as the quintessential outsider artist, and his paintings and illustrations are displayed at famous museums such as MoMA and The American Museum of Folk Art. His work can sell for hundreds of thousands at esteemed art fairs and auction houses such as Christie’s. Outsider art is now a popular and collectible art style. The term was first coined by art critic Roger Cardinal in the early 1970s. It is a synonym for the pre-existing art style Art brut which translates to raw or rough art.

Art From The Margins

Outsider artists are self-taught or naive art painters who are not affiliated, influenced, or exposed to mainstream culture. As a result, they consolidate a highly unique, personal style that deviates away from the norm. Outsider art is renowned for conveying unconventional ideas, such as fantasylands like Darger’s. Given these defining characteristics, it makes sense that outsider art is inextricably tied to and practiced by those on the fringes of mainstream society. For example, outsider artists can be psychiatric hospital patients who used their artworks as a sort of therapy, communication, or means of escapism.

For instance, another well-known outsider artist is Adolf Wolfli who produced countless artworks from his cell in a Swiss asylum during the twentieth century. He spent the majority of his adult life there. His work, which consisted of poetry, collage, and coded musical compositions that he allegedly played on a paper musical trumpet caught the attention of Dr. Walter Morganthaler, one of the institution’s psychiatrists.  Rather than perceiving Wolfli’s creative outpourings as simply a symptom of mental illness, Morganthaler recognized them as illustrative of innate artistic ability and dedication to a craft. Subsequently, he published a selection of Wolfli’s work in a publication titled A Mental Patient as an Artist. Other artists who are known to have produced some of their most famous works whilst institutionalized include Vincent Van Gogh and Edward Munch.

For Henry Darger, his art practice appears to be motivated by a combination of therapy, communication, and escapism. Biographers and art historians have pieced together a backstory that portrays a somewhat tragic life. Darger was born in Chicago in 1892 and lost his mother to puerperal fever when he was just four years old. He then lived with his father for the majority of his early childhood, until his father was taken to St. Augustine’s Home for the elderly.

It is believed that Darger lived a solitary and ultimately fairly unhappy existence there. He was socially isolated from his peers due to his quiet nature and random outbursts that have been attributed to his possible Tourette syndrome. Following his father’s death, Darger fought to escape the institution and eventually did so successfully. With the help of a distant family member, Darger managed to find casual employment within a Catholic hospital as a janitor.

From this point on Darger lived a life that was seemingly unexceptional. A life governed by routine and habit, in which he retained the same type of employment until his death. He had very few friends. Although Darger did normal everyday activities, such as attending the daily mass, he was also engaged in unusual practices, such as collecting and saving an assortment of rubbish from the streets. By 1930, Darger was settled in an apartment located in Chicago’s North Side, where for the next 43 years he worked on his many art pieces.

The Story of the Vivian girls

Henry Darger’s final project is a fascinating insight into his mental state. It shows to what extent his own upbringing and childhood experiences shaped and influenced his work. The story of the Vivian girls tells the tale of a war between two nations on an unnamed, fictional planet where Earth is identifiable as the moon. The story’s lead protagonists and heroines are the seven Vivian sisters, or Abbiennian princesses, who are fighting for justice against the cruel and vicious Glandelinians overlords, known for child enslavement and abuse.

The Christian nation of Abbiennia eventually reigns victorious and persuades their nemesis Glandelinians to cease their evil practices.  However, this happy ending is not without its trials and tribulations. As articulated by The Carl Hammer Gallery, the battles that Darger conjures are  “[…] full of vivid incident: changing armies, ominous captures, storms, and explosions, the appearance of demons and dragons”. Indeed, whilst the heroes of this elaborate world achieve their happily ever after, this conclusion is only possible after their exposure to enslavement, torture, and barbarous abuse. All of which is visualized by Henry Darger in painstaking, and often shocking, detail.

The methods and materials that Henry Darger deployed to tell this story are mixed. It seems that he was unconfident in his own artistic ability, and often relied on the technique of tracing figures using his collection of catalogs and magazines. He then arranged them into large landscapes and collage-like compositions, where some were double-sided and as large as 30 feet wide. Some were also photographically enlarged so that they could be re-traced over to add further features. To color his illustrations, Darger relied predominantly on watercolors and used a diverse palette with heavy use of yellow, green, grey, and red.

Art historians and psychologists have postulated a myriad of theories relating to Darger and his work. His drawings of naked children have led to some speculations that he might have been a pedophile, however, this has never been proven. The generally more accepted theory is that Darger was very sheltered and used his fictitious child princesses as a metaphor for childhood innocence which he himself had lost growing up.

Therefore, many perceive Henry Darger’s work as semi-autobiographical and interpret it as his need to protect children from the Glandelinians of real life. For example, the authoritative figures of the orphanage and asylum had failed in their duties of looking after and nurturing the vulnerable children under their care. In keeping with this idea, Darger is buried in All Saints Cemetery in Illinois where his grave headstone is inscribed with the fitting description of both Artist and Protector of Children.

Henry Darger’s work is a perfect example of how art can be used to communicate a powerful and meaningful narrative for both the artist and the audience. Since his death, the outsider artist has gained substantial recognition and fame. His pieces have been featured in exhibitions in reputable museums. His artworks are also included in the permanent collections of the Museum of Modern Art and American Folk Art Museum located in New York.

If you’d like to further explore how illustrations and graphics can be used to tell unconventional stories, read about Toshio Saeki, an iconic Japanese artist whose bold and controversial work intrigues viewers whilst simultaneously making them uncomfortable.

By Philippa OgdenMA History of MedicinePhilippa Ogden has a passion for history and holds a MA in the History of Medicine from Newcastle University. She is particularly interested in perceptions of the body within the early modern period. In her spare time, she is a keen musician who plays old-time and bluegrass fiddle in her hometown of North-East England.