Hawaii’s role in history is not often understood. Before becoming a US state, it was once an independent nation with its own vibrant history and culture! 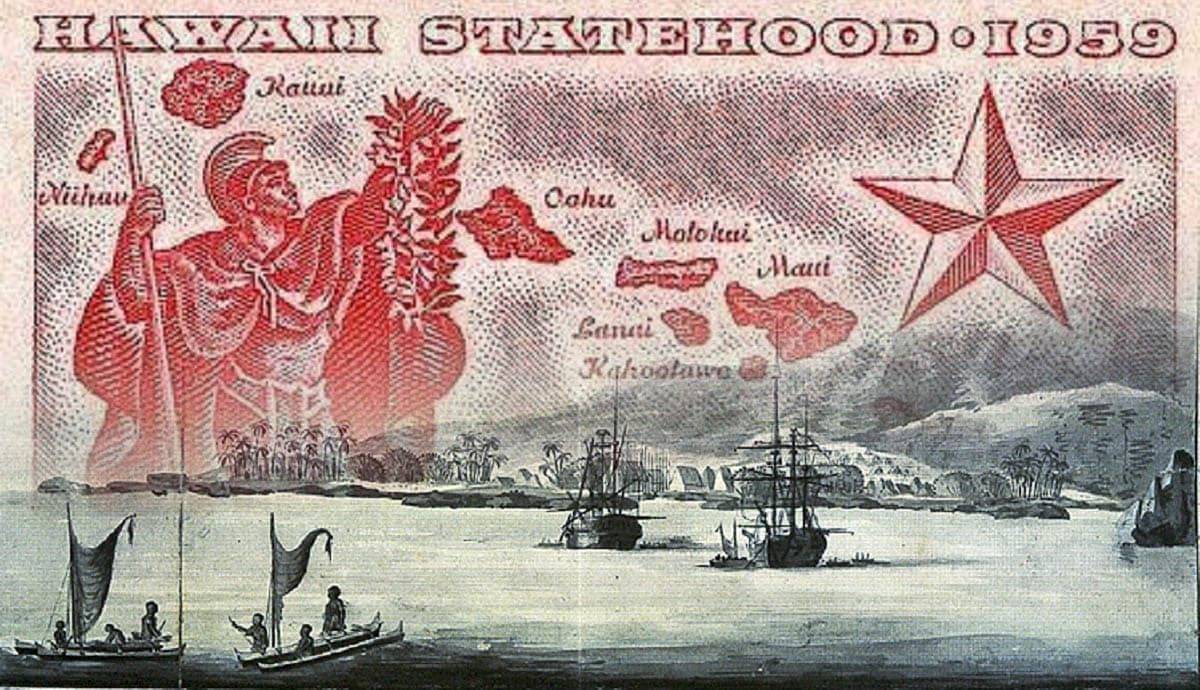 Today, Hawaii is the only true island state in the United States. Its distant location in the Pacific Ocean often makes it a relative mystery to other Americans. Just as Native Americans populated the continental United States prior to European settlement and American expansion through the 1800s, Native Hawaiians also had a rich, vibrant culture and history in their own land. This is a look at the history of Native Hawaiians and how they became incorporated into the United States during the 19th and 20th centuries. From the Spanish-American War and subsequent annexation into the US, here is a look at the native culture and history of this chain of active volcanic islands.

Due to its remoteness, the South Pacific was the last region of the globe to be settled by humans. Traveling the oceans was accomplished with the use of double-hulled canoes by ancient Polynesians. Pacific islanders were very advanced in sailing techniques and navigation long before Europeans were ready for cross-Atlantic voyages. The first Polynesian settlers to Hawaii may have arrived as early as 400!

Settlement of the entire South Pacific region, including Hawaii, took a thousand years due to the complexity of navigating such wide expanses. Traditional Polynesian boats were fast and light and could be paddled even when there was no wind to operate the sails—Europeans who first encountered such vessels marveled at their quality and speed. Although Pacific islanders lacked compasses, they had elaborate techniques for navigation that included noting the position of the setting and rising sun, as well as tracking the time and distance traveled.

The first settlers on the Hawaiian islands are believed to have come from the Marquesas Islands. They brought pigs and chickens, which had Asian origins. By the 1300s, many settlements had spread to the sheltered coastal parts of the islands, such as lush valleys.  Between the 1300s and 1500s, settlers began moving inland.

After the Seven Years’ War, the British had become the dominant European power, also known as the French and Indian War in North America. To improve travel between the Pacific Ocean and England, the English sought to discover a Northwest Passage that would run between the Pacific and Atlantic Oceans through northern Canada. Although Captain James Cook did not discover such a passage, he did become the first white person to land in Hawaii in January 1778.

Cook was initially greeted as a king-like figure. However, his crew dealt harshly with any perceived aggression or mischief from native peoples, resulting in hostilities that erupted in 1779 when he returned to Kealakekua Bay to retrieve items he thought had been stolen.  Cook was ultimately killed in this violent confrontation. Cook’s discovery of the Hawaiian islands was published in 1784, sparking interest in Europe and North America.

At the time of Cook’s discovery of Hawaii, the islands were ruled by rival chieftains. One of the most powerful was Kamehameha, who received divided territory after the death of his uncle in 1782. Due to his skill as a warrior, Kamehameha was able to amass allies and challenge others for control of Hawaiian territory. By 1790, the civil war ended with no leader gaining control over Hawaii.

After 1790, however, Kamehameha had a distinct advantage that would let him unite Hawaii by force by 1810: European weapons. Kamehameha’s territory included Kealakekua Bay, which was frequented by foreign trading ships. He also adopted the use of war dogs, like the Spanish Conquistadors, and hired European artisans to build a warship. His final remaining rival, the ruler of Oahu, also utilized the help of European advisers before a power-sharing deal was ultimately made that acknowledged Kamehameha as national sovereign.

Despite the ill fate of James Cook, other westerners were eager to explore and settle the beautiful islands. In 1809, an American sailor arrived in Hawaii and created the first large ranch owned by white settlers. Starting in the 1820s, Christian missionaries from the United States and Europe began settling in Hawaii. As in the continental United States, native people were encouraged to adopt westernized concepts of private land ownership and permanent farming. White settlers often took the best land for themselves, which became profitable for agriculture.

The spread of white culture and manufactured goods would disrupt traditional island culture. Europeans introduced new crops to Hawaii, including coffee, pineapple, and mango. The coffee industry proliferated between the 1820s and 1840s, and in 1848 King Kamehameha III passed a law to allow private ownership of land, abandoning the traditional feudal model of land ownership based on heritage.

After the legal reform to allow private land ownership, known as the Great Mahele of 1848, westerners quickly took advantage of the new system. Many Native Hawaiians did not successfully convert their feudal holdings to the new legal holdings, allowing white settlers to purchase much of the best land. This allowed wealthy settlers to create large plantations for cash crops like coffee and sugar. The Hawaiian sugar trade soared during the American Civil War (1861-65) when the Union could no longer import sugar from the South.

As early as 1842, the US government had its eye on Hawaii. That year, the Secretary of State sent a letter to Hawaiian diplomats in Washington DC indicating that the US was interested in close relations with the young nation and formally opposed its annexation by European powers. This was the same time period during which the independent nation of Texas was interested in becoming a US state, which it finally accomplished in 1845. In 1849, diplomatic relations were formalized between the United States and Hawaii.

In 1875, a Reciprocity Act was signed between Hawaii and the United States to allow imports from each nation without tariffs. This provided economic benefits and allowed the US government land in Hawaii, which later became the Pearl Harbor naval base. As economic trade between the two nations increased during the 1870s and 1880s, the US wanted to ensure that those economic ties could not be hindered.

Americans in Hawaii Overthrow the Monarchy

Despite being a formally independent sovereign nation, including a diplomatic delegation in Washington DC, American troops helped overthrow Hawaii’s monarchy in January 1893. The year before, a group of American and European businessmen had begun plotting a coup d’etat to overthrow the new queen, Lili’uokalani, if she proposed a new constitution that would strengthen her power. A previous constitution, written in 1887, limited the monarch’s power and aided the interests of westerners.

When the coup was launched in January 1893, the US Navy quickly assisted by landing sailors and Marines in Honolulu. To avoid violence, Queen Lili’uokalani quickly abdicated, allowing a US-backed provisional government to take control. Although US President Grover Cleveland protested the coup that December, Congress took no action, and the provisional government was allowed to remain. A new Republic of Hawaii was created in 1894 with Sanford B. Dole, one of the coup organizers, as the first president.

Annexation of Hawaii by the United States

Now a republic led by a white president, Hawaii was ripe for annexation by the United States, similar to what had occurred with Texas some fifty years earlier. President Sanford B. Dole traveled to Washington DC to personally advocate for annexation. The sudden outbreak of the Spanish-American War in the spring of 1898 made Hawaii invaluable to war hawks who wanted a strong naval presence in the Pacific. US President William McKinley also wanted to annex Hawaii to prevent the expansion of Japanese domination in the region.

Congress agreed with annexation and voted to do so in the summer of 1898. Under the agreement, Dole became the first governor of the US territory of Hawaii. The status of US Territory was finalized in 1900. Dole retired from the governorship in 1903 and became a federal district court judge. His younger cousin, James Dole, moved to Hawaii in 1899 and became famous for the fruit company that bears his last name.

In 1940, with tensions rising in the Pacific region due to Japan’s aggression against China and other surrounding nations, US President Franklin D. Roosevelt transferred the navy’s Pacific Fleet from San Diego, California to Pearl Harbor, Hawaii. Because of Japanese atrocities in China, the US had stopped selling oil to the island nation, which had no natural reserves. Anxious for oil, Japan decided to go on a major offensive across the South Pacific to seize oil in and near the Dutch East Indies (Indonesia). The only potential obstacle? The US Navy!

The Japanese pre-emptively struck the US Pacific Fleet at Pearl Harbor on the morning of December 7, 1941. Over 2,400 American military personnel were killed, along with 68 civilians. The battleship USS Arizona was sunk, and today remains a monument to the horrific attack. Overnight, the American public became far more aware of Hawaii and its strategic importance.  War was swiftly declared on Japan, and soon the US was also at war with Japan’s Axis Power allies, Germany and Italy. Unfortunately, many loyal Japanese-Americans in Hawaii were interned temporarily out of fear that they might be loyal to Japan and assist in hostilities against the United States.

In 1959, the last two states to the union were admitted: Alaska and Hawaii. After approval by Congress, US President Dwight D. Eisenhower, and Hawaiian voters, Hawaii became the 50th state on August 21. It continues to serve as a transportation and military hub for the United States in the Pacific Ocean and today is a major destination for tourists. Tourism is Hawaii’s largest industry, and the islands are renowned for beautiful scenery and a pleasant climate.

As a remote chain of islands, Hawaii has a high cost of living, including record-high real estate prices. Another challenge is maintaining Native Hawaiian culture in the face of tourism demands and financial pressures from investors and wealthy settlers. Residents hope that Hawaii can retain its pristine beauty and tradition while enjoying the benefits of modern life, with tourists and newcomers respecting the islands’ heritage and nature.

By Owen RustMA Economics in progress w/ MPAOwen is a high school teacher and college adjunct in West Texas. He has an MPA degree from the University of Wyoming and is close to completing a Master’s in Finance and Economics from West Texas A&M. He has taught World History, U.S. History, and freshman and sophomore English at the high school level, and Economics, Government, and Sociology at the college level as a dual-credit instructor and adjunct. His interests include Government and Politics, Economics, and Sociology.

Native Americans: A History of Conflict in the South