The Seven Years War was a world conflict fought on five continents in which all the great European powers of the time took part. 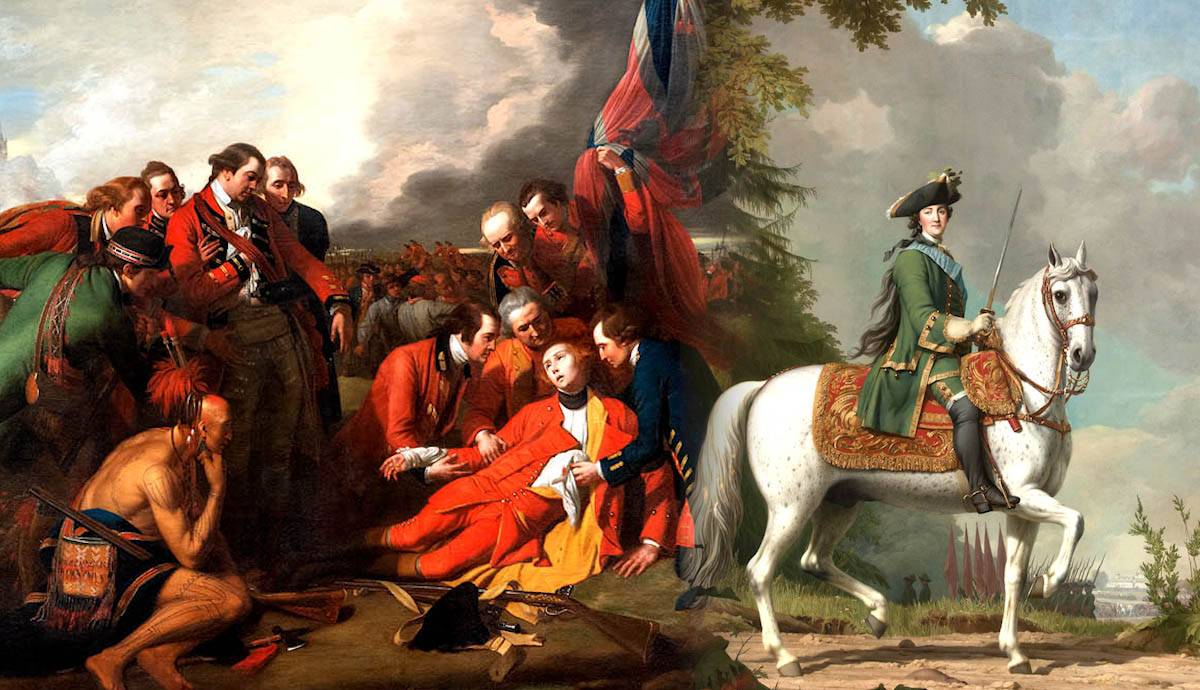 The pressure created by competition between various European states and dynasties during the 18th century exploded into a large-scale war. Due to the territorial distribution of the areas in which it was fought, it can be freely called a world war. Due to differences in the goals and relationships of the conflict’s main rivals, the Seven Years’ War can be divided into two parts.

The first part of the Seven Years’ War was a rivalry between Austria and Prussia that also involved the growing ambitions of Russia on European soil, which is why it is often called the Continental War. The second part concerned the Anglo-French rivalry in North America, the Caribbean, and India. This part of the war is known as the French and Indian War, or the Great War for Empire.

In the early 18th century, the main rivalry in Europe had been between the Habsburgs and the French. However, by the middle of the 18th century, politics shifted, so that this old rivalry was no longer so important, and new rivalries grew — above all between the French and the British.

Competition in the New World and the desire of Austria to take revenge on Prussia for the loss of Silesia were some of the main causes of the war. For Austria, France was no longer their main rival because her position in the Holy Roman Empire now depended on the actions of an increasingly greedy Prussia. Therefore, Austria found a partner in an anti-Prussian coalition with Russia and its Empress Elizabeth.

The Russians viewed Prussia as an obstacle to their ambitions in Eastern Europe, and Prussian geographical vulnerability was particularly appealing to the Russians. The personal motivations of Empress Elizabeth also came into play. She was a woman of great faith and she did not have much respect for Prussia’s Frederick II, who was not overly pious. All these differences led to the beginning of the Seven Years War.

The Creation of Alliances and First Conflicts in Europe

Frederick II, aware of the dangers surrounding him, hurried to ensure his safety through diplomatic channels. Prussia and England concluded a convention in Westminster, whose main goal was to secure peace in Germany.

France perceived this agreement as a betrayal by Friedrich, who did not have confidence in France’s ability to help him when in trouble. Therefore, France and Austria signed an agreement in Versailles in May 1756. Russia was ready to immediately enter the war, which chancellor Kaunitz wanted to postpone till 1757.

In August 1756, Frederick II sent his troops to Saxony, which started a new war, known to us today as the Seven Years War. The army captured Dresden and defeated the Austrian army near Lobositz. In the following year, Friedrich’s forces experienced both defeats and victories. The generous financial support of Britain enabled Friedrich to maintain his troops despite the great superiority of his enemies.

After a defeat at Kolin (June 1757), Frederick withdrew from Bohemia. French troops occupied Hanover, and the Russians invaded East Prussia. In October, the Austrian army captured Berlin, and Friedrich tried to renew his alliance with France, without success. The Swedes also invaded Pomerania, and the French invaded the Rhine provinces.

In November and December 1757, Frederick inflicted heavy defeats on the Saxons and Austrians in the battles of Rossbach and Leuthen, which enabled the return of Prussian troops to Bohemia and Silesia. It strengthened Friedrich’s reputation and position and encouraged hope among his army and his people.

Turning the Tides of War

During the summer of 1758, one of the bloodiest battles of the Seven Years War occurred. The Prussian army inflicted a heavy defeat on the Russians at Zorndorf and in October, the Austrians defeated the Prussians at Hochkirch. It became obvious that Prussia could not continue the Seven Years War as before: its army had only 100,000 soldiers versus their opponent’s 200,000.

In August 1759, the Russians defeated Frederick at Kunersdorf, a battle in which the Prussians lost almost 25,000 soldiers. Frederick believed that all was lost. This was Russia’s biggest victory in the Seven Years War and the Russians entered Saxony, as Frederick made great efforts to maintain his army.

Against the odds, in the summer and autumn of 1760, Frederick inflicted heavy defeats on the Austrians at Liegnitz and Torgau, which weakened the Austrians’ will to fight. At the same time, the Russians burnt Berlin.

The following year, Prussia found itself in a difficult position. Britain’s King George III removed William Pitt from power, ending English aid. On the other hand, in January 1762, Empress Elizabeth died, and her successor Peter III was a fan of Frederick and immediately ordered the cessation of war operations and reduced the threat to Prussia.

The Great War for Empire

The conflict between France and England spread throughout the world, wherever the two powers were in close contact. The fiercest conflicts, however, took place in the territories of North America and India. Although war was declared in 1756, it really began with the arrival of the English regular army and operations at Fort Duquesne.

The situation changed dramatically in 1757 when the determined William Pitt took the lead over the British war effort. Setting the conquest of Canada as his ultimate goal, Pitt organized a series of offensives that culminated in the capture of Quebec in 1759. The British victory at Quebec in September 1759 practically determined the outcome of the war. By the end of the war in Europe, Britain was victorious everywhere.

Britain took away from France their main strongholds in North America — Louisburg, Ticonderoga, and Niagara. As the end of the war drew nearer, the complete collapse of French rule in North America became increasingly apparent.

In May 1762, Russia and Prussia signed a peace agreement in St. Petersburg, according to which Russia was to return its conquered territories. In the same month, Prussia concluded peace with Sweden. The coming to power of Catherine II, (the Great) did not encourage the renewal of hostilities with Russia.

Frederick was able to concentrate his few remaining funds against Austria, winning the battles of Burkersdorf and Freiburg. Cut off from British funding, Frederick accepted Austrian pleas to begin peace negotiations in November 1762. These talks eventually produced the Treaty of Hubertusburg, signed on February 15, 1763, which ended the Seven Years’ War.

The terms of the contract were an effective return to the status quo. As a result, Prussia retained the rich province of Silesia acquired by the Treaty of Aix-la-Chapelle in 1748. This treaty brought respect for Prussia and acceptance of the nation as one of the great powers of Europe.

The Treaty of Paris

By November 1762, Great Britain and France, along with Spain, participated in a peace treaty called the Treaty of Paris. As part of the agreement, the French ceded all of Canada to Britain and waived all claims to territory east of the Mississippi River except New Orleans. In addition, British entities guaranteed navigation rights along the length of the river. Fishing rights at the Grand Banks were confirmed, and France had permission to keep the two islets of St. Pierre and Miquelon as commercial bases.

In the south, the British held the estate of Dominica, Tobago, and Grenada, but returned Guadeloupe and Martinique to France. In Africa, Gorée was returned to France, but Senegal was guarded by the British.

Britain became the absolute controller of India, which would soon become their most important colony. The defeat of the French in North America would also bring some problems to the English, as their 13 colonies would feel relief after the departure of the French threat, so they would no longer have to rely on England to guarantee their safety. This would later become one of the reasons for the struggle of the 13 American colonies for independence from British rule.

The Consequences of the Seven Years War

Britain remained the world’s ruling power, albeit deep in debt. The costs of the war introduced new problems for relations with their colonists — a situation that would continue with the American Revolutionary War, another global conflict that would end in a British defeat.

France on the other hand was on the brink of economic catastrophe and revolution and Prussia lost 10% of its population. Still, Frederick’s reputation remained, as he had survived the alliance of Austria, Russia, and France, intact.

Reforms followed in many belligerent governments and armies, as Austria’s fear that Europe was on its way to catastrophic militarism proved to be well-founded. The failure of Austria to reduce Prussia to a second-rate dominion led the two countries to compete for the future of Germany. This situation benefited Russia and France and eventually led to the creation of the Prussian German Empire.

The Seven Years’ War also marked a shift in the balance of diplomacy. Spain and the Netherlands became less important, and they were replaced by two new great powers: Prussia and Russia. Saxony was destroyed.

The Great Westernizer: How Peter the Great Earned His Name