HomeStoriesReconquista: How the Christian Kingdoms Took Spain from the Moors

The Reconquista, the reconquest of Spain, lasted seven centuries, from the 8th century to the 15th century. During that time the Iberian Peninsula was liberated from Muslim rule. 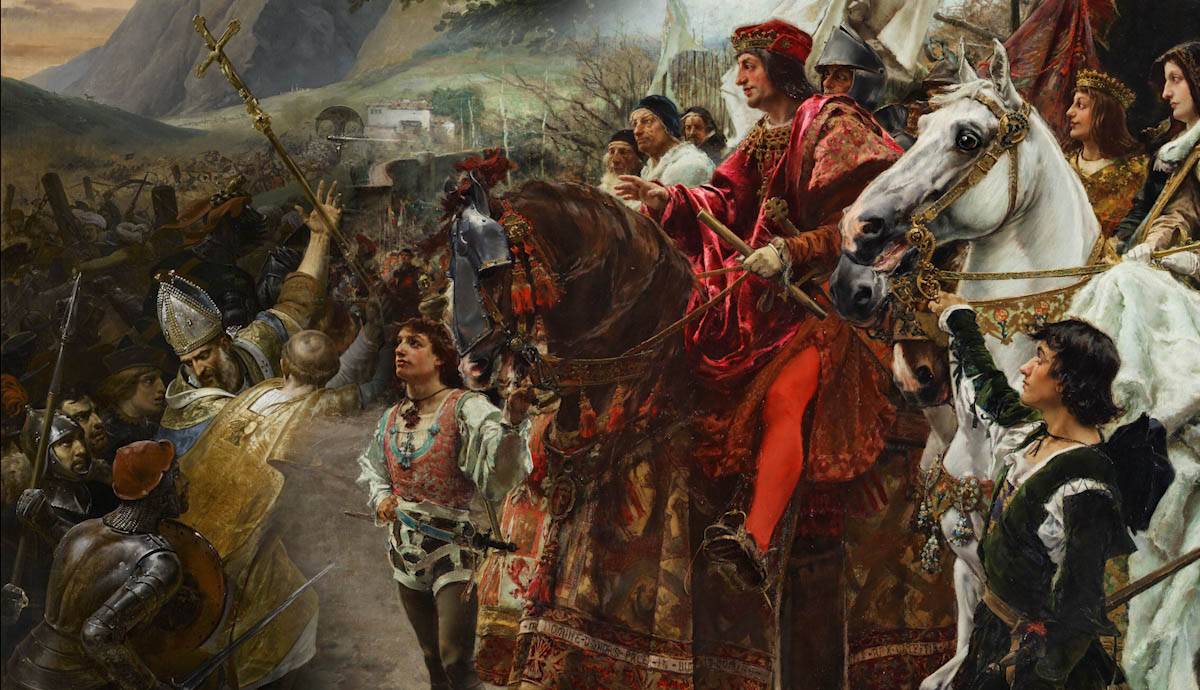 The Iberian Peninsula was invaded in the 8th century CE by the Muslim Umayyads. The Umayyad state, known as the Umayyad Caliphate, was based in Damascus. The Umayyads brought an army from North Africa and inflicted heavy defeats on the Visigoth regime in Iberia, at the Battle of Guadalete in 711. This victory opened the way for the armies of Islam to conquer the whole Iberian Peninsula.

By the beginning of the 11th century, a civil war had broken out in the Muslim Caliphate of Cordoba, after which the Iberian Peninsula disintegrated into several different Islamic kingdoms. This disagreement led to the expansion, advancement, and emergence of the Christian kingdoms to the north, among the strongest of which were the kingdoms of Castile and Aragon. Christianity spread rapidly, and so began a movement to restore the dominance of the Christian kingdoms, in a period known as the Reconquista.

The Muslim Conquest of Spain

The Muslim conquest of Spain was never total. When Umayyad forces invaded the country in the 8th century, the remnants of the Christian armies retreated to the northwest corner of Spain, where they founded the kingdom of Asturias. At the same time, Charlemagne founded the Spanish March east of this country, in Catalonia.

Between the 9th and 10th centuries, the golden age of Islamic Spain occurred. In the capital of Cordoba, a beautiful mosque was built, second only to the Great Mosque in Mecca. At the same time, Christian Spain consisted of only a few small independent areas in the northern part of the Iberian Peninsula, where people prayed in low, cave-like churches.

By the 11th century, the Christian countries were revived. At this time the monks of Cluny began to organize a pilgrimage to the great shrine of Santiago de Compostela in northwestern Spain. Feudal knights started arriving there after the monks and pilgrims, warmed by the crusading ideal of fighting non-believers. These knights breathed life into the ideals of the Reconquista.

Conquest of Toledo and Role of El Cid

The first great success of the Spanish Reconquista was the conquest of Toledo, ten years before the First Crusade. In a fierce battle in 1085, Alfonso VI annexed the city of Toledo, which had previously been the capital of the Visigoths. After the victory, Toledo was considered a stronghold in the fight against the Muslims.

After their defeat, the Muslim taifas turned for help to the rulers of North Africa, the Almoravids. This alliance contributed to their victory over the Spaniards at Sagrajas in 1086. But it was only a temporary success. Soon, in 1094, thanks to the famous Spanish cavalryman Rodrigo Diaz de Vivar, better known as El Cid, the Castilians managed to capture Valencia. The Christians repeatedly repulsed the attacks of the Muslims, and they soon controlled Valencia and Toledo. In 1118 they also captured Zaragoza.

Because of his overall importance to the Spanish Reconquista, El Cid has become one of the greatest heroes of Spanish history and he was the main subject of many legends and romances sung by wandering singers. As the Reconquista took on the characteristics of a heroic struggle, the Christian part of the peninsula found the story of their struggle reflected in one of the best medieval epics of the period — the Song of El Cid. For Spaniards, El Cid embodied the ideal of chivalrous virtue and patriotism and was the greatest hero of the Reconquista period.

The Turning Point of the Reconquista

However, in the late 12th century, the Christians ran out of luck. The new rulers of North Africa, the Almohads conquered large parts of Muslim Iberia. By the end of the 12th century, the Castilians had retreated to the north. It was the hardest phase of the whole Reconquista period.

To defeat their enemy, the kings of Castile, Aragon, Leon, and Navarre created a union and at the beginning of the 13th century, there was a new turning point in the Reconquista. In 1212 the united forces of the Christian Spanish kingdoms, joined by Crusaders from other European countries, defeated the Almohads in the battle at Las Navas de Tolosa. It was a defeat from which they could not recover. Now the conquest was progressing fast.

In 1236 Christian Spaniards occupied Cordoba — the center of the Caliphate — and at the end of the 13th century, the Moors controlled only territories in the south of Spain. The new Emirate of Granada centered around the city of Granada. It was in this territory that Islamic Iberia held out for a very long time — until 1492. By the 14th century, the two kingdoms of Castile and Aragon had the dominant role in Spain. However, great changes would occur over the next century.

Kingdoms of Aragon and Castile

The Christian states that formed in the Iberian Peninsula were aristocratic monarchies. First, in Castile, the leaders of the council came from the highest secular and ecclesiastical authorities. Later, representatives of the ordinary peasantry were also invited to these meetings.

There was a constant war between the kingdoms of Aragon and Castile. Both sides wanted to annex the other and thus unite the peninsula. In the middle of the 15th century, Aragon became a large maritime state. Although the trade interests of Catalonia played a crucial role in the rise of the Kingdom of Aragon, these conquests brought the greatest benefits to the knights of Aragon. They occupied vast areas of Sicily and southern Italy and they began to exploit the peasantry of those countries in the same way as they exploited peasants in Aragon.

In the center of Spain, Castile covered three-fifths of the entire peninsula and played a major role in the Reconquista. With the death of King Martin I of Aragon in 1410, the kingdom was left without an heir. The Compromise of Caspe of 1412, led to the decision that the Trastamara dynasty of Castile should take over the rule of Aragon.

Ferdinand and Isabella: The Unification of Spain

At the end of the 15th century, the last phase of the unification took place. One of the most significant moments in the history of Spain was the unification of Aragon and Castile. In 1479 these kingdoms officially united under the reign of a married couple — King Ferdinand of Aragon and Queen Isabella of Castile. Their territories included most of the Iberian Peninsula, the Balearic Islands, Sardinia, Sicily, and Southern Italy. The consequence of this unification was that Spain became one of the most powerful countries in Europe. The marriage between Isabella I of Trastamara and Ferdinand of Aragon was a political means of consolidating power and uniting the crown.

They soon turned their attentions toward the Emirate of Granada, the last Muslim stronghold in Spain. In 1481 Isabella and Ferdinand started their campaign in Granada. The whole campaign had the character of a Crusade against non-Christians. The war with the Moors lasted for 11 years, and in 1492 Isabella and Ferdinand conquered Granada. With the conquest of Granada, almost the entire Iberian Peninsula was united in the hands of the Spanish kings, and the Reconquista ended in 1492, while the unification of Spain ended with the addition of Navarre in 1512.

Consequences of the Reconquista: The Creation of a Catholic Kingdom and the Inquisition

The Moors surrendered Granada on the condition that Muslims and Jews could retain their property and faith. But these promises were not fulfilled and many Muslims and Jews had to move to North Africa. Isabella and Ferdinand wanted to impose political and religious unity among their diverse population, which could not happen painlessly. Under Islamic rule, Spanish Christians, Jews, and Muslims had lived in relative harmony, but this tolerant atmosphere soon ended.

Spain gained its Catholic unity, but at a high price. More than 150,000 Muslims and Jews left Spain, and many of them were skilled, capable, and educated people who made significant contributions to the Spanish economy and culture. Of course, all of this would never have happened without the Reconquista.