From the Moors: Islamic Art in Medieval Spain

Moorish art is a term used to explain the artistic production of Medieval Spain under the rule of the surviving remnants of the Umayyad Caliphate after the 8th century. 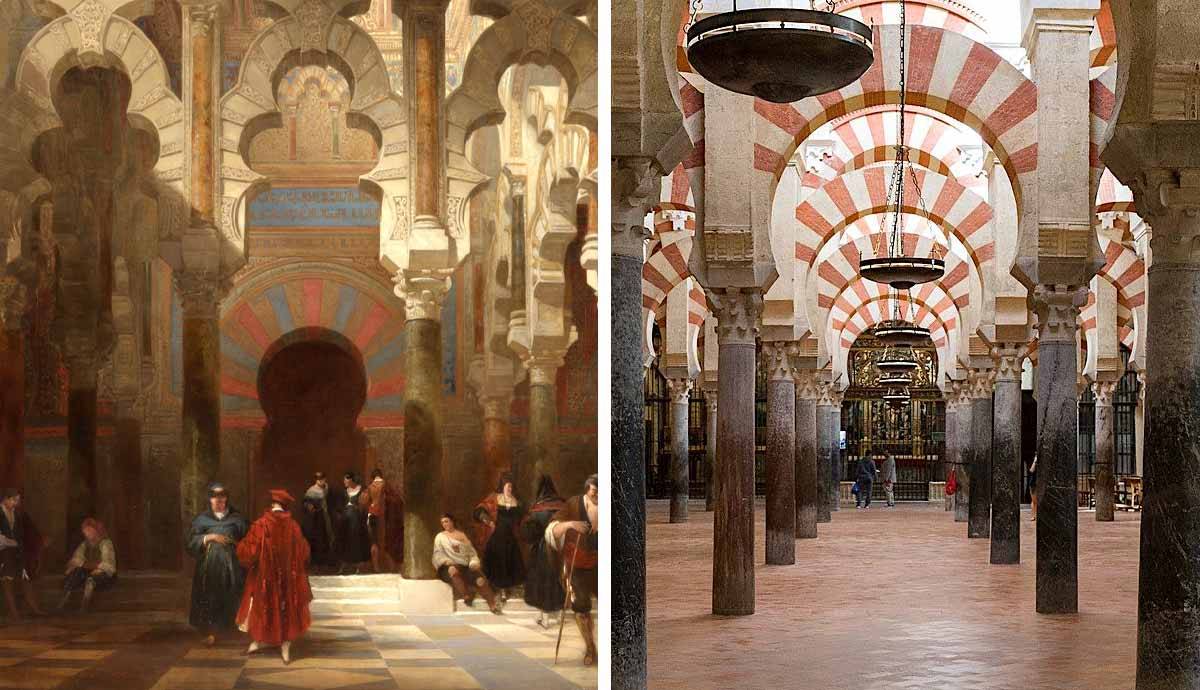 From the 8th to the 16th century, medieval Spain was a place where many cultures and peoples clashed. With intermissions, the city-states of both Christians and Muslims in Spain were characterized by peaceful trade, religious tolerance, and intellectual patronage. In this context, the palaces of the exile rulers of the Umayyad dynasty were fertile grounds for the development of Moorish art. Fusing the multiculturalism and prosperity of medieval Spain, it grew into some of the masterpieces of Medieval art in general. The Great Mosque of Cordoba and the Palace city of Alhambra, though changed through the centuries, still remain prime examples of Moorish art.

The Beginnings of Al-Andalus

In 711, the army of Umayyad caliphs landed in the south of the Iberian Peninsula, kick-starting a new period of medieval Spain and the development of Islamic art. In the next seven years, almost all of the peninsula, by then Visigoth territory, was under Muslim rule. Newly conquered territories of the Umayyads came to be known by their Arabic name, al-Andalus. By 750, in the east of the Caliphate, a new Arab faction revolted against the ruling dynasty. Led by Abul Abbas as-Saffah, it overthrew the Umayyad rulers in Damascus. The new Abbasid dynasty showed no mercy towards their predecessors. The living Umayyads were assassinated, and graves of the dead ones were desecrated. One surviving prince, Abd al-Rahman I, escaped from North Africa to Spain, establishing the emirate in the city of Cordoba.

Several terms describe Islamic-type art in Spain, each of which has a particular meaning. The best-known term is “Moorish art,” which is sometimes used to refer to Islamic visual culture in general. The less well-known term, Mudéjar, refers to architecture carried out for Christian patrons by Muslim craftsmen. Mudéjar architecture uses most of the characteristic elements of Islamic art and architecture, including Arabic calligraphy and the horseshoe arch.

The importance of Moorish art lies in using elements from various traditions to create distinct styles. In Medieval Spain, Christians and Jews lived in a Muslim-held kingdom, sharing knowledge and artistic tradition, all while speaking the same language. Moorish art was based on its relation to the Umayyad courts in Cordoba, Granada, Toledo, Seville, and Malaga. All the artistic innovations were ushered in by the patronage of the rulers of these city-states. They viewed sponsorship of artistic activity as a privilege of kingship and didn’t make distinctions between the religion of their craftsmen.

The Great Mosque of Cordoba

Until Ferdinand III of Castile captured the city, Cordoba had been the capital of Islamic Spain. Abd al-Rahman I made it the capital of al-Andalus and started the construction of the Great Mosque of Córdoba (known in Spanish as La Mezquita). By the 10th century, the city had around 50 mosques, but the religious center was always the La Mezquita. The Great Mosque was built on the site of a Visigoth church that the Muslims had previously shared with the Christians.

The mosque was enlarged multiple times by Abd al-Rahman II and al-Hakim II, which meant adding new mihrabs (prayer niches). The 9th-century mihrab is the size of a large room and has now been converted into the Villaviciosa chapel. Next to this mihrab is the royal enclosure embellished with grand carved stucco decoration and multifoil horseshoe arches. The other 10th-century mihrab is an octagonal chamber set into the qibla wall with a massive ribbed dome supported on arches. The dome’s interior is decorated with polychrome gold and glass mosaics (perhaps a gift from the Byzantine emperor).

Madinat al-Zahra is a 10th-century palace-city west of Cordoba. Though now in ruins, the extensive complex was begun by Abd al-Rahman II and completed by his son al-Hakim II. It is named after Abd al-Rahman’s favorite wife, Zahra, and was supposed to be a palatial residence and administrative center away from the crowded capital of Córdoba.

The palatial complex is an interesting example of how the Spanish Umayyads tried to emulate the architecture and protocol of their more powerful ancestors in Damascus. In particular, the complex is thought to recall the country residence of Abd al-Rahman, the first Spanish Umayyad, at Rusafa in Syria. Usual motifs of Islamic and Moorish art, such as symmetrically arranged vegetal scrolls and complex geometric patterns, covered the surfaces of objects. Works of art made in Madinat al-Zahra were products of a Mediterranean taste that drew upon indigenous traditions of Spain as well as those of the Umayyads’ native Syria.

In 1010, Madinat al-Zahra was destroyed during a Berber revolt, and its riches were plundered.  Some materials from the palace were reused by Peter of Castille (Pedro the Cruel) in building his palace in Seville. Many of its objects ended up in northern Europe, where they were admired and preserved.

Seville was the first capital of the Visigoths until they moved to Toledo. It was captured by the Arabs in the 8th century and remained a Muslim city until the early 13th century, when it was taken by Ferdinand III. Despite this change, Seville remained an important center of Moorish art throughout the Middle Ages. During the Islamic period, the city was known for silk weaving and scholarship.

Unfortunately, little remains of the early Islamic city. Parts of the first Umayyad mosque founded in 859 can be found in the church of San Salvador. These remains include arcades resting on columns and the minaret, which may be Spain’s oldest surviving Muslim building. The present cathedral of Santa Maria de la Sede is built on the site of the Almohad Great Mosque, built in 1172. The mosque itself no longer exists, but the minaret known as La Giralda still dominates the city’s main square.

The interior contains seven chambers, one on each story, each with a different type of vault. The best example of Moorish art and architecture in Seville is the Alcazar, which was rebuilt as the palace of Peter of Castille in the 14th century. Many of the masons and craftsmen were hired from Granada, a fact that explains some of the similarities between the lavish decoration and design of this palace and the Alhambra. The palace also reused some of the columns and other building materials that were taken from Madinat al-Zahra after its destruction in 1010. The palace contains a series of courtyards or patios decorated with intricately carved stonework arcades.

Toledo was the capital of the Visigoths until its capture in 712 CE by the Arabs, who used the city as their capital until they moved to Córdoba in 717. The city remained a vital frontier city until its capture by the Christians in 1085. However, this didn’t stop Muslims and Jews from making significant contributions to the city’s intellectual life with translations of scientific treatises.

Considerable remains of the Islamic period are still standing, together with some notable examples of Moorish art. Probably the most famous gate of the city is the Old Bisagra Gate (also known as Puerta de Alfonso VI), through which El Cid entered the city in 1085.

Within the city, there are several important religious buildings, one of which is the mosque of Cristo de la Luz, the former mosque of Bab al-Mardum. It is a nine-domed mosque with a raised central dome built in 999. Originally, there were triple entrances on three sides with a mihrab on the south side. Three of the outer faces are made of brick and decorated with a band of Kufic inscriptions, below which is a geometric panel above decorative intersecting round horseshoe arches.

Granada is one of the longest-lasting strongholds of Islamic Spain. It became prominent after other Muslim city-states were defeated in the 13th century. From 1231 to 1492, Granada was ruled by the Nasrid dynasty, which maintained alliances with Christian neighbors.

The masterpiece of not just Moorish art, but Islamic art in general, is the palace complex of Alhambra. It is not a single palace but a complex of palaces built over hundreds of years. The earliest parts of the complex date from the twelfth century, although most buildings were constructed during the 14th or 15th centuries. Several public buildings survive within the walls, including the hammam (Bañuelo Carrera del Darro), one of the best examples of Islamic architecture remaining in Spain. Also within the city is the Casa del Carbón (coal exchange), formerly known as the Funduq al-Yadida (new market).

As is usually the case with Moorish art, its decoration is the result of a synthesis of preexisting local Spanish traditions and artistic influences from neighboring Christian regions, North Africa, Iran, and the Near East. This distinct Nasrid style is known for its slender columns, colorful geometric tilework, horseshoe arches, carved plaster walls with lacelike patterns and Arabic inscriptions, extensive use of muqarnas (small, honeycomblike niches used to decorate architectural surfaces), and four-part gardens. The Nasrid rule in Spain ended in 1492, but the Christian conquerors from the North continued to use the Alhambra palace and adapted many Andalusian forms and styles into their own visual culture.

After centuries of gradually losing its hold on the Iberian Peninsula, the Islamic rule over Spain came to an end. Though politically weakened, its intellectual, philosophical, and theological influence defined the cultural development of Europe. From Spain, the skills and styles passed to the rest of Europe. Most obviously, some of the main elements of Gothic architecture, the pointed and multifoil arch and ribbed vaulting, come from the influence of Moorish art.

By the beginning of the 16th century, the Spanish arrived in Mexico and brought with them the shared Christian and Muslim culture. Their homeland’s artistic and architectural styles were brought to the New World. Further, Spanish Catholic missions in California and Arizona made by the monks of the Franciscan order in the 18th and 19th centuries expanded it further. The influence of Moorish art and designs is especially visible in San Xavier del Bac in Arizona and San Luis Rey de Francia in California.

6 Stories of Byzantine Emperors Based on Their Portraits