HomeArt6 Stories of Byzantine Emperors Based on Their Portraits

6 Stories of Byzantine Emperors Based on Their Portraits

For more than a thousand years, Byzantine emperors held the most important place in the Mediterranean. Here are 6 of their stories told by their surviving portraits. 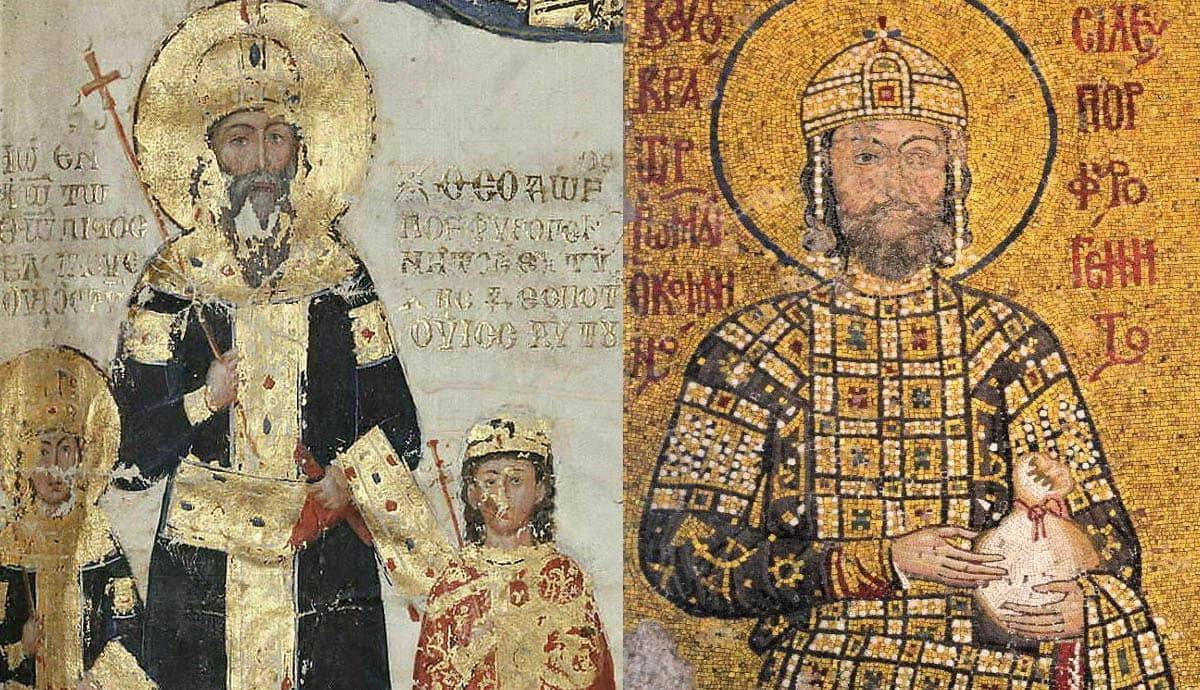 The Eastern Roman Empire, or Byzantium, is a continuation of the Roman Empire centered in the city of Constantinople. Roughly, it lasted from the consecration of Constantinople in 330 AD to its fall to the army of Ottoman sultan Mehmed II in 1453. During its more than a thousand-year existence, the Byzantine played a crucial role in the Mediterranean’s political, cultural, religious, and economic developments. It occupied different territories at different times, from Spain in the West to modern-day Iraq in the East. The conceptual pillars upon which the Empire was built were Greek culture, Roman law, and Christianity. Byzantine emperors, whose political and religious importance was unparalleled by any other European monarch, held a firm grasp on the life of the Middle Ages.

From the 7th century, Byzantine emperors officially carried the title basileus (Greek for emperor) of Romans. During the existence of the Byzantine Empire, this title was considered the highest ordain a monarch could receive. Its importance lies in multilayered religious and political symbolism. First of all, the ruling basileus was the heir to the throne of Constantine the Great, the first Christian Emperor.

Since Constantine’s power came from Christ, all of his successors had been appointed to the same position through divine providence. This idea of the emperor as Christ’s emissary on earth is the foundation of the Byzantine political ideology. Even with many dynastic changes and grievous events that almost ended the Empire, this idea was ingrained in the minds of Byzantines. Representations of Byzantine emperors, from the golden mosaics of Hagia Sophia to miniature portraits of Constantinople manuscript makers, were all defined by this belief.

This unique mosaic decorates the lunette over the Imperial Door of Hagia Sophia. The central figure is an enthroned Christ blessing with his right hand and holding a gospel in his left. To his right is a prostrating Byzantine emperor in ceremonial garments. In the upper field of the mosaic are two medallions. In one medallion, there is a woman, presumably Virgin Mary, and in the other is an Angel holding a scepter. Based on the style of the mosaic, it is dated to the end of the 9th or beginning of the 10th century, during the reign of either emperor Basil I or his son Leo VI. Regardless, the idea of prostration has been connected to repentance, an Old Testament example being the Repentance of David before Nathan.

Though he was a well-educated emperor, Leo’s transgressions against the church were so out of place that he had been denied entrance to Hagia Sophia on two occasions at the Imperial Door. Leo’s fourth marriage caused a schism between the Church and the State. According to the patristic tradition, the fourth marriage was considered “beastly polygamy.” Unfortunately for Leo, three of his first wives died without providing the heir to the throne. Leo not only married his concubine but proclaimed (although not crowned) her the Empress of the Romans. This event was a catalyst for numerous events for which Leo repented at the end of his life in 912.

A simple golden coin portrait of a Byzantine emperor holding a globus cruciger and Christ holding a gospel is depicted here. According to the inscription, the emperor is Constantine, and scholars agree that this is none other than the scholar-emperor Constantine VII Porphyrogenitus. The representation itself is common for Byzantine coins, representing the core belief of a Byzantine emperor ruling through divine providence.

Constantine VII was the son of emperor Leo VI and his mistress Zoe Karbonopsina, whom he married after their son’s birth. This was done in great opposition to the Greek Church and its patriarch Nicholas Mysticus, which forbade the widower to remarry more than once. Leo’s death in 912 made for fertile ground for debates and doubts about the legitimacy of Constantine as a rightful heir to the throne. Together with his young age, Constantine was pushed aside by nobles until 949, when he seized the Byzantine throne. To relieve these doubts, Constantine used the name Porphyrogenitus to signal that he was born in the Purple Chamber of the Imperial Palace in Constantinople. This was a place where only legitimate children of reigning emperors and worthy imperial successors were born.

Shown here is a depiction of Byzantine emperor John II on the walls of the south gallery in the Great Church of Hagia Sophia in Constantinople. This part of the church was reserved for the imperial family and courtiers while attending the liturgy. On the right of the Virgin Mary holding Christ-child is John II. On the left is his wife Irene, as well as his son and co-emperor Alexios on the western wall. The imperial couple offers a bag and a scroll to Mary and Christ. A sack filled with earth and a scroll symbolize the mortality and humility of the one presented. Thus, this image emphasizes the piety and philanthropy of the imperial family. The inclusion of Christ-child blessing John recalls the idea of the origin of imperial power and the legitimacy given to John and his son through their favor. The inclusion of halos around their heads emphasizes the idea further.

Not only was John II a patron of the Great Church, but he also financed the building of many other Orthodox sanctuaries. Most notably, John and Irene founded the monastery dedicated to Christ Pantocrator in Constantinople (Zeyrek Mosque). Their son Manuel I Komnenos built another church in the monastery, dedicating it to the archangel Michael.

The manuscript Parisinus Graecus 1242 holds a number of interesting portraits of John VI Kantakouzenos. The book consists of four theological treatises written by John himself. The most detailed one shows the emperor presiding over a council flanked by Orthodox high priests. John VI, sitting on a throne, is much larger than the other figures. He is wearing a golden crown (a Byzantine stemma), a dark robe (a Byzantine sakkos), and a golden waistband (a Byzantine loros) while holding a cruciform scepter and a red scroll. All of these attributes are symbols exclusive to the Byzantine emperor.

John VI was an emperor-usurper, taking the throne from John V of the Palaeologus dynasty. This started a civil war between two factions in Constantinople. Parallel to their fight over the throne, a theological controversy and debate were taking place. Barlaam of Calabria accused the Athonite Hesychast monks of rejecting the scriptures and claiming to experience psychosomatic visions of God’s essence. In his defense of the Hesychast practices and theophanic theology, Gregory Palamas argued that, although God’s essence is unknowable, it is still possible for humans to experience by divine grace a luminous vision of God’s uncreated energies.

This is the same divine light that the disciples had seen during Christ’s Transfiguration on Mt. Tabor. This same debate found its way into the civil war, with John VI supporting Palama’s Hesychasm. John Kantakouzenos eventually won the war, which marked the triumph of Hesychasm. At the Council of June 1351, presided by John VI, the anti-Hesychast teachings were condemned. This marked the victory of Palama’s teaching.

The Byzantine emperor shown with his family is Manuel II Palaeologus. Above the imperial family is the half-figure of the Virgin Mary with Christ blessing them. The head of Manuel is considered a realistic portrayal of the Emperor. On the colophon, the last page of the manuscript, it is written that Manuel sent this manuscript to the monastery of Saint-Denis in Paris in 1408, four years after his visit. The text is a translation of the writings of Dionysius the Areopagite, patron of the monastery. In the case of the portraits of the imperial family with Mary and Christ, they can be interpreted as a form of propaganda. The scene is typical for Byzantine art, as it shows that the Emperor derived his power from heaven and enjoyed divine protection.

In great need of aid against the growing threat of Ottomans, Manuel left Constantinople in December 1399. This long voyage took him to Venice, Milan, Paris, and London. While staying in Paris, Manuel often spent his time in the Monastery of Saint-Denis discussing theological matters. Unfortunately for Manuel, all his diplomacy provided no military aid. At the end of 1407, he organized another diplomatic mission, headed by Byzantine intellectual Michael Chrysoloras, who delivered the manuscript to the abbot of Saint-Denis.

Minted at the end of the 8th century, these coins, for the first time in the history of the Empire, represent the Empress as a sole ruler. The woman in question is empress Irene of Athens. From both sides, the golden coins show the portrait of Irene with a cruciform scepter and globus cruciger. In them, she is titled as either Basilissa or Augusta, titles carried by the emperor’s wife. We know of only one instance where she called herself “Irene the pious emperor.”

The rule of the first Byzantine Empress was dynamic and eventful, to say the least. Irene was an Athenian-born wife of the emperor Leo IV, and mother of Constantine VI. Irene ended the first period of Iconoclasm in 787 at the Seventh Ecumenical Council in Nicaea. At the council, the veneration of icons was restored. Even as a co-emperor, Irene held most of the political power in the Empire. She crushed multiple conspiracies and revolts. After having her son arrested and blinded, Irene became the sole ruler of the Empire. She opened diplomatic relations and contemplated marriage with the Frankish king and emperor Charlemagne. She stayed on the throne until court officials and generals deposed her in 802. Just a year later, she died on the island of Lesbos and was canonized by the Ecumenical Patriarchate.