HomeStoriesRichard the Lionheart and Saladin: The Great Rivalry of the Crusades

Richard the Lionheart and Saladin: The Great Rivalry of the Crusades

The Third Crusade was fought between 1189 and 1192. Discover the many epic clashes between King Richard the Lionheart of England and the great Kurdish leader Saladin. 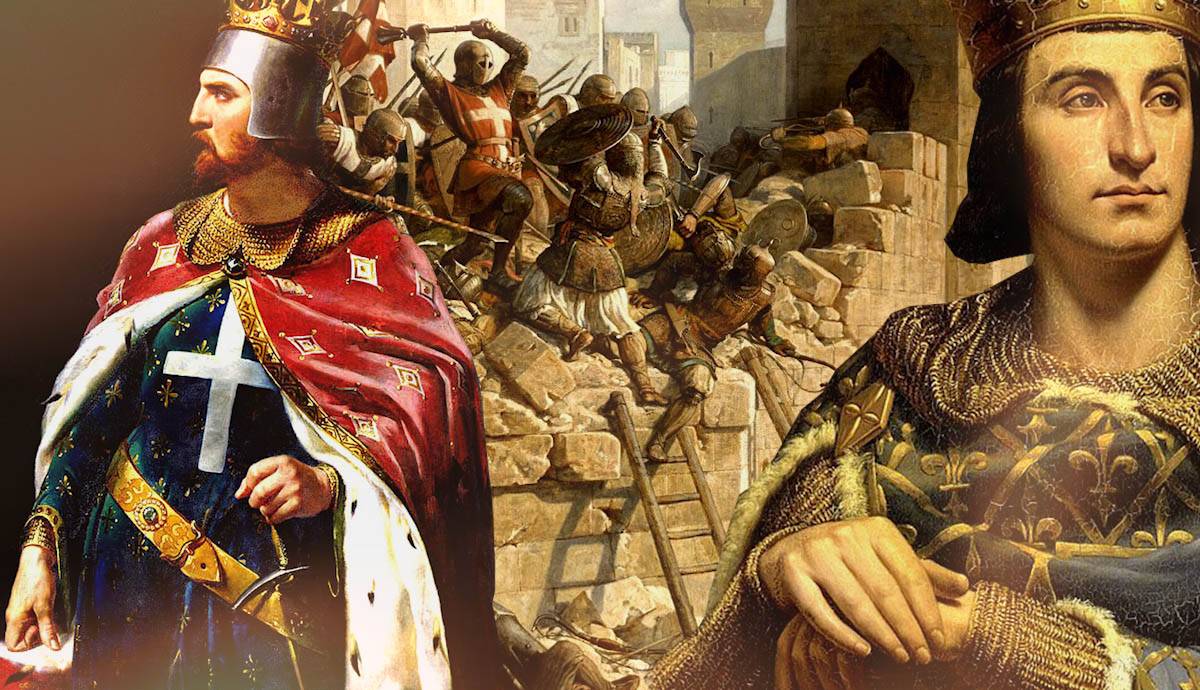 In the late 12th century a vast area covering Egypt and Syria was in the hands of a new ruler, Saladin. Saladin had shown his power by conquering Jerusalem in 1187. After the conquest of Jerusalem, he had also shown his character as a noble warrior, who did not take revenge for the Christian massacres in the city, letting all the Christians leave peacefully. The fall of Jerusalem ultimately led to the Third Crusade.

The call of Pope Gregory VIII was accepted by the most powerful European rulers of the time: the German ruler Frederick Barbarossa (who never even reached the Holy Land because he drowned in a small river in Asia Minor), the French King Philip II Augustus, and the English King Richard the Lionheart. For the first time since the crusades began, the Crusaders found themselves clashing against an excellent military leader and an even better diplomat, Saladin.

Richard the Lionheart and the Initiation of the Crusade

In October of 1187, Jerusalem fell under Muslim control, and at the end of October that year, Pope Gregory VIII issued a bull, the Audita Tremendi, calling the Third Crusade. The Holy Roman Emperor Frederick Barbarossa was the first to leave, departing from Regensburg on May 11, 1189, with an organized and prepared army. The German emperor traveled to the Byzantine Empire via Hungary and Serbia. Arriving in Byzantium, Frederick did not receive a warm welcome. He also had great difficulties when he reached Constantinople as Isaac II Angelos was not in a friendly mood towards the German ruler.

At the end of March 1190, Frederick moved through Asia Minor. He followed the well-known path of Godfrey of Bouillon. The arrival of the English and French armies was expected, so the Muslims were fearful. However, one event reversed the situation in favor of the Muslim armies; Frederick Barbarossa drowned in the River Saleph on June 10, 1190. His death greatly aided the position of Muslims who were in a difficult situation.

The other two rulers started their journey much later. Philip left Messina on March 30, 1191, and arrived in Acre on April 20. Richard the Lionheart conducted an adventurous expedition on the way to the Holy Land, leaving Messina on April 10, but arriving in Syria on June 7.

The Crusader Conquest of Acre

In the summer of 1191, the French and English kings attacked the city of Acre. By July, the city was exhausted, and the garrison began negotiations. Saladin was not against peace, but the Christians were offering very strict conditions. On July 12, 1191, Acre fell into the hands of the Crusaders.

Fulfilling the preconditions for peace they soon ran into some obstacles and there were serious misunderstandings among the Crusaders. After the liberation of Acre, both the French and the English wanted to seize more power in the city and started to oppress the local population. The kings did not care that the Muslims had fulfilled the provisions of the treaty and the French king was extremely irritated.

Philip’s dislike of Richard the Lionheart fueled rumors that the English king was planning to sell the entire Christian army to the Muslims and that he was preparing to encroach on Philip’s life. Annoyed and ill, Philip left Acre and went home. The early return of the French king caused great damage to the cause of the Crusades.

Massacre of Prisoners in Acre

After the fall of Acre, the number of Muslim prisoners was around 3,000. One part of the surrender conditions was the exchange of prisoners and Saladin had agreed and was willing to pay a high ransom for the Acre garrison. Details about why they reached no agreement are not known. After Saladin released the first group of prisoners on July 24, there was a discussion about the ransom.

After losing patience and believing that the delay was inappropriate for Saladin, Richard the Lionheart decided to continue his campaign as soon as possible. He took the prisoners out in front of Acre on August 20 and killed 2,600 of them. In his letter to the Abbot of Clairvaux, Richard stated that “as the pact which he [Saladin] had agreed was entirely made void, we quite properly had the Saracens that we had in custody . . . put to death.”

Saladin’s troops watched the massacre and attacked the Christians in an attempt to save their compatriots. They were easily repulsed by the crusaders, who withdrew when the reinforcements sent by Saladin arrived. Richard’s reputation fell in the eyes of his Muslim enemies and the eyes of Saladin himself. Saladin had no choice but to do the same as Richard had done, and killed his captured crusaders.

The crusaders had to move further south. Richard the Lionheart planned to secure the Syrian coast, from where he could later direct his forces towards Jerusalem. Saladin certainly could not calmly watch this march through Palestine, so he followed them constantly through the hills, waiting for Richard to make a mistake. Saladin knew he could not defend certain cities, so he destroyed them.

The Crusaders reached Arsuf. In the gardens in front of the town, Saladin intended to enter into an open battle with them. On September 7, 1191, it was extremely hot near Arsuf and the crusaders were surrounded by Saladin’s army, and there was no way out. Richard the Lionheart did not want his army to suffer a similar fate to the crusader army at Hattin, defeated by Saladin, so he consolidated his ranks and prepared for their defense.

The ensuing victory at Arsuf was essential for the Crusaders. It was a great strategic defeat that cost Saladin many troops, including the best warriors from his army. The fall of Acre and the battle of Arsuf were major blows that reflected on Saladin’s prestige in the Muslim world.

Saladin wanted to block the road to Jerusalem. He was by now in a difficult position. His army was losing morale, but the sultan encouraged them by telling them that they were on their land and that the Christians would have to work hard to conquer Jerusalem. Saladin became aware that he could no longer engage in open conflict with Richard, so he began evicting the Muslim population from his cities, who moved in processions towards Egypt.

Saladin avoided open conflicts and completely withdrew behind the line of defense in Jerusalem. He hoped that the attacks of the English king would eventually stop. He was sure that the interests of Richard the Lionheart in Europe would prevail, forcing him to give up the campaign and return to the west.

King Richard the Lionheart twice led the troops towards the interior of Palestine, both times reaching a small improvised fortress, which was only eighteen kilometers from the Holy City — in December 1191 and in June 1192.

On both occasions, he probably had no intention of actually launching an attack on the city, these were just tricks designed to test Saladin’s determination and they contributed to subsequent diplomatic negotiations. During these maneuvers, the king respected all the rules of medieval warfare but still failed to achieve his goal.

Negotiations Between Richard the Lionheart and Saladin

Diplomacy ultimately occupied a very important place in the Third Crusade, unlike in previous conflicts, where there were no negotiations and all disputes were resolved by force of arms. Negotiations were used to assess the enemy’s fighting strength and morale, but also for deception.

Instead of Saladin, Richard the Lionheart met with the sultan’s brother and right-hand man Al-Adil during long and frequent negotiations. Richard the Lionheart was a much better and more cunning diplomat than Saladin thought. The final negotiations came after the Battle of Jaffa in August 1192. Richard, who was in a difficult situation and worried about his English possessions, used all his means to enter into relations with Saladin.

Finally, Richard the Lionheart, who, by staying longer in the Middle East risked losing his crown, concluded a treaty with Saladin on September 1, 1192. This treaty gave him a small coastal belt from Jaffa to Tyre. Jerusalem remained under Muslim rule. In October 1192, Richard the Lionheart left Syria. Although both rulers planned to continue the war, this did not happen. Richard even spoke publicly on several occasions about his plans to return to the Holy Land, but in the end, none of those big plans came to fruition. In this way, the conflict between these two great medieval rulers came to an end.