The Kingdom of Prussia served as the precursor to modern Germany. From a small region in northern Poland came a German superpower, reigning from 1525 until World War II. 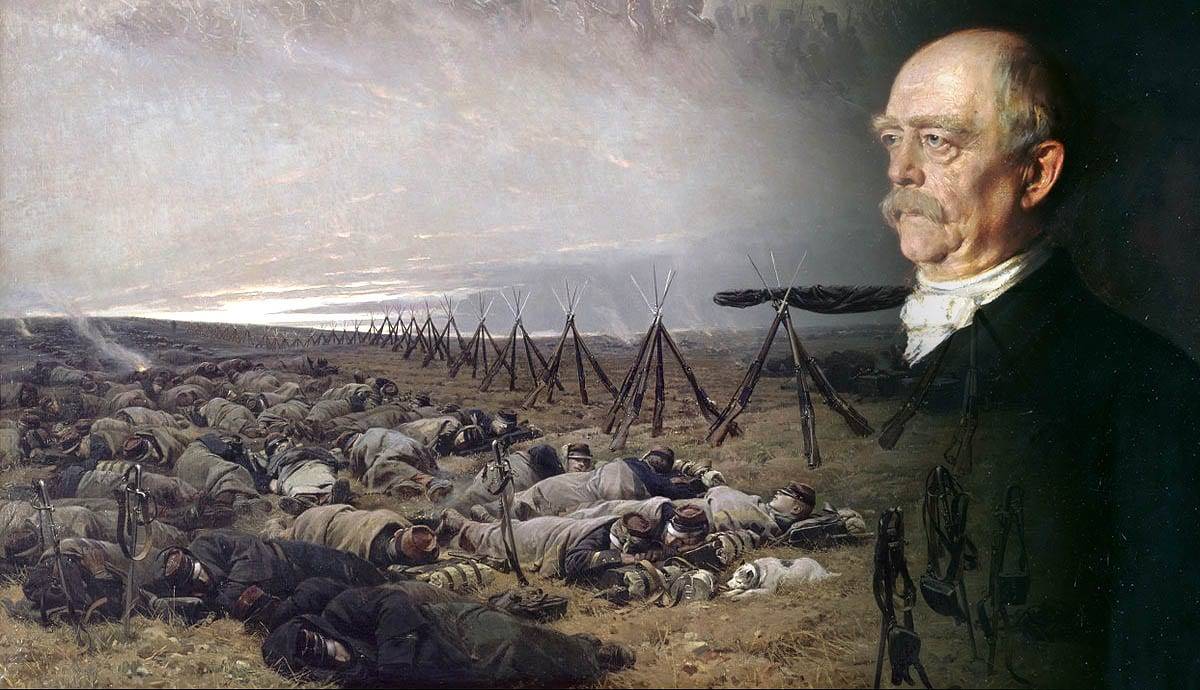 The Prussian Prime Minister Otto von Bismarck oversaw the unification of scattered German-speaking states in 1871, forming the German Empire and becoming its first Chancellor. But what was Prussia before Bismarck’s brainchild? Why did Prussia hold the seat of power in the new Bismarckian imperial state? Prussia was the single most dominant German power in the late nineteenth century – where has it gone? Read on to discover the history of Europe’s forgotten superpower: The Kingdom of Prussia.

Before a United Prussia: Fragmented Germany

The region of Europe for which the Kingdom of Prussia was named sits nestled between Poland and Lithuania on the southeastern corner of the Baltic Sea. Its people spoke a Baltic language related to modern Latvian and Lithuanian, called Old Prussian, more broadly related to Polish and Czech.

To the west, the region that would become Germany was fragmented into a number of duchies, electorates, principalities, and minor kingdoms united only in language. Though these fragmentations existed within the bounds of the Holy Roman Empire, its crown lacked the administrative power to impose political dominance throughout the region evenly.

Historic Prussia existed administratively independent from the surrounding kingdoms. In the 13th century, the Teutonic Knights – German-speaking Christian crusaders sent by the Holy Roman Emperor – conquered the region and imported German culture and language. The Germans clashed with the Polish, thirteen years of conflict ensued and resulted in the Second Peace of Thorn signed between King Casimir IV of Poland and the Teutonic Knights in 1466.

The Second Peace of Thorn split the region into Eastern Prussia and Western Prussia – a fiefdom and a province to the Polish crown. In 1525, the eastern fiefdom established a ducal government in the wake of the Protestant Reformation and remained susceptible to Polish, German, and Lithuanian immigrants. Both Prussian realms descended from Teutonic Prussia (after the German knights’ invasion) a generation prior.

In 1525, Albert, both a Grand Master of the German Teutonic Knights and a nephew of the Polish King, was awarded the title of Duke of Eastern Prussia by his uncle. Duke Albert adopted Lutheran Protestantism as a state religion, making it the first European government to do so, and married a daughter of the King of Denmark.

The Teutonic Knights were a Catholic order; the militaristic wing of a faith renounced by Albert of Prussia upon becoming Duke. As Duke, Albert single-handedly secularized Protestantism which swept northern Europe. Albert heavily favored the arts and education and established several schools. Ironically, he also participated in overthrowing Holy Roman Emperor Charles V, sufficiently weakening any imperial presence around the German states.

The Rise Of A Prussian Kingdom

Albert’s Prussia would remain a fiefdom of Poland until 1657. The territory also sustained governance by the lineage of Albert until the male line died out in 1618.

The Thirty Years War between Catholic and Protestant powers (1618-1648) ravaged northern Europe. The religious discourse had existed within the German states since the era of Martin Luther and was exemplified by the conflict. By 1648, the Holy Roman Empire was reduced to a shell that echoed its former religious fervor: Germany was shattered.

At the beginning of the conflict in 1618, the Hohenzollern dynasty of German Brandenburg, of which Albert himself was descended, intermarried with Albert’s descendants in Prussia. The resulting inbred line politically solidified the family’s holdings in the Holy Roman Empire with those in the east: the region of Prussia in Poland. However, the two holdings were landlocked from one another and not yet territorially united.

After the Peace of Westphalia ended the Thirty Years War in 1648, the newly dubbed Brandenburg-Prussia gained significant territorial expansion. Nine years later, the Brandenburgs signed the Treaty of Bromberg, which freed the Prussian region from the Polish crown.

Immediately, Brandenburg-Prussia established a highly-skilled standing army and a navy, opened up its territory to swaths of Protestant immigrants, and centralized its administration in a new capital in the Western holdings: Berlin. By 1701, Prussia had declared itself a kingdom.

The operation was overseen by the current Elector of Brandenburg and simultaneous Duke of Prussia: Elector Frederick William (r. 1640-1688). Though he would not live to see his domain achieve the status of a kingdom – a title first claimed only by his son and successor – the status was the fruit of his labor.

After the devastating Thirty Years War, Frederick William focused his efforts on rebuilding his war-ravaged economy and military. His policy of religious tolerance spurred immigration which buttressed both of these feats. Economically, Frederick William allied himself with his nephew William of Orange – sovereign of the economic powerhouse that was the Dutch Republic who also would sit on the throne of Britain as William III (r. 1689-1702).

While shifting his attention westward toward his nephew in the Netherlands, Frederick William kept a fixed gaze on shattered Germany. The war had substantially weakened the Catholic Holy Roman Empire, and Protestantism had prevailed in pockets of its borders. Though it was weak, the final devastating blow to the Holy Roman Empire would only be delivered by Napoleon Bonaparte in the next century.

Frederick William was succeeded by his son in 1688, who ruled as Frederick I, Duke of Prussia. As of 1701, Frederick I became King Frederick I of the Prussian Kingdom.

The United Kingdom Of Prussia

The family line in Germany had now seized control of both the German and Polish territories and imposed the name of the Polish region. Thus, the Kingdom of Prussia was born. Her first king, Frederick I (r. 1701-1713), was first cousins with the Dutch-born King of England William III.

With the economy and military built under his father, Frederick focused the new Kingdom of Prussia on dominating the fragmented German political realm. The excellent economy and mass immigration yielded a powerful noble merchant class. Though the economy was surging, the imperial administration had a thorn in its side, preventing absolute autonomy.

It was not until Frederick I was succeeded by his confusingly-named son Frederick William I (r. 1713-1740) that the Prussian imperial sovereign accumulated enough sway to rule with absolute power. Economically, the strictly militaristic and frugal lifestyle of Frederick William contrasted with that of his lavish father and greatly fed the imperial treasury.

Prussia During The Enlightenment

Frederick the Great ushered the Enlightenment movement into his young state. The Prussian state had become powerful enough for the third generation of its sovereignty under Frederick II to annex areas of Poland expanding eastward. To the west, Frederick competed with his Austrian Habsburg counterparts for control of Germany.

As of 1772, Frederick the Great finally territorially united the holdings of his crown save for a few small electorates to the west. In order to unify these territorial vulnerabilities, Frederick clashed heavily with Maria Theresa of Austria – the sovereign of the Habsburg line ruling as Holy Roman Emperors.

The policy of religious tolerance, the liberal political philosophy, and the immense stimulation of the arts spurred Prussia into becoming a dominant European power. Frederick the Great was a personal friend of the Enlightenment philosopher Voltaire and Johann Sebastian Bach, whose son sat at the king’s court. Prussia flourished and became a European cultural powerhouse in addition to a political one.

Frederick the Great was rumored to have been homosexual and died childless in a loveless marriage. If it wasn’t for his nephew Frederick William II, the family line might have ended with this great ruler.

An Obsolete Power: The Legacy Of Prussia Today

Prussia continued to exert its dominance on Germany well into the next century. Throughout the nineteenth century, significant territorial gains accumulated and eventually led Prussia to become the core power behind attempts at unifying Germany, which began in the 1860s.

First absorbing most German principalities into the North German Confederation in 1867 and eventually the German Empire in 1871, Prussia had quite literally dominated a Germany that had been fragmented for so many years. When the German Empire was formed, the Prussian Prime Minister Otto von Bismarck served as its first Chancellor from 1871 to 1890.

In 1918, following the German Revolution, the imperial administration was replaced with a democratic republic. By the 1930s, the shell of what was once Prussia had been absorbed into Nazi Germany. After the Second World War, the partition of Germany between the United States and the Soviet Union effectively crushed any existence of the Prussian state. From once a dominant power, Prussia has now become a historical write-off.