The English Civil War was arguably the British chapter of the religious conflict that was the Thirty Years War. How did the conflict make a social impression? 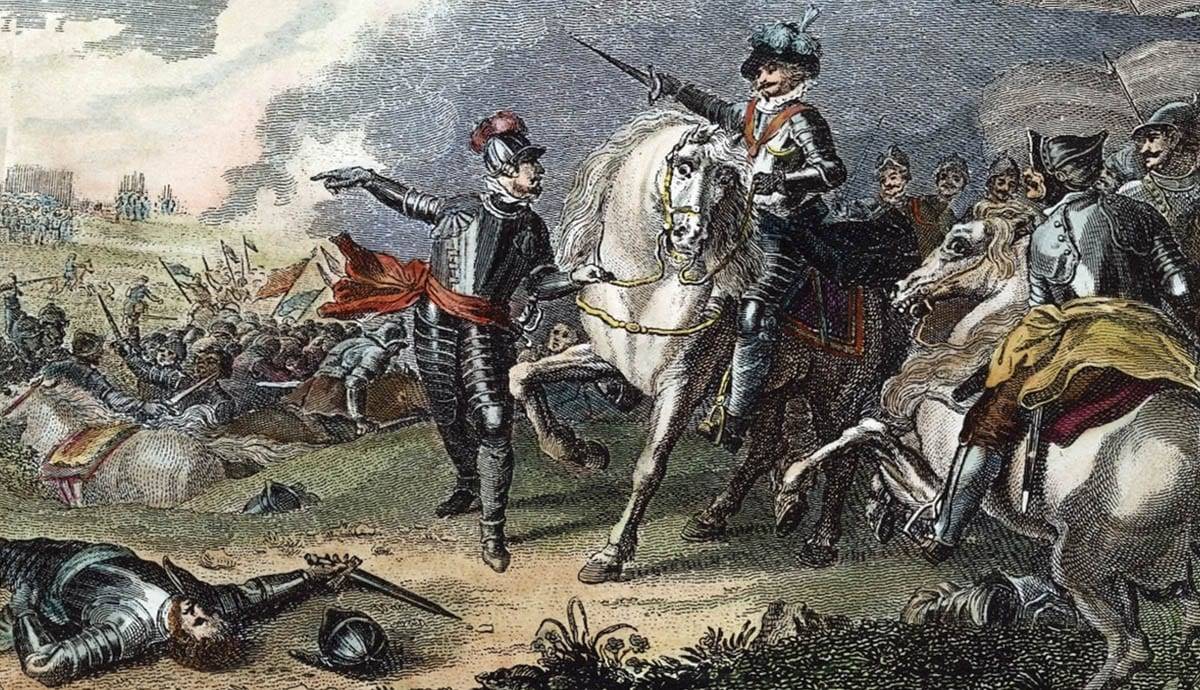 The first half of the seventeenth century is marked by extreme religious violence. One hundred and one years after Martin Luther nailed his Ninety-Five Theses onto the door of the All-Saints Church in Wittenberg, Germany, his followers – by then known as Protestant Christians – faced off with their Catholic counterparts in what is known as the Thirty Years War (1618-1648). The British chapter of this violence became evident in the English Civil War (1642-1651) which not only transformed the British state but also made a significant political and philosophical impression on budding liberal thinkers such as John Locke. It was due to the English Civil War that the United States would form its ideology of religious freedom.

Seeds of English Protestantism: Prelude to the English Civil War

Protestantism in England is cultivated from the renowned story of King Henry VIII (r. 1509-1547). The King, second ruler of the House of Tudor after his father, had trouble producing a male heir to secure the line of succession. Henry married six different women in desperate attempts to solve his succession issue. Though he fathered twelve (legitimate and known) children in his lifetime – eight of them being boys – only four survived into adulthood.

Henry first wedded a Spanish princess: Catherine of Aragon. Together they had six children, though only one – the eventual Queen “Bloody” Mary I (r. 1553-1558) – survived into adulthood. The King eventually wanted to annul his marriage after Catherine failed to produce a strong male, which went against Catholic principles.

Pope Clement VII refused to grant the annulment; it was unchristian. In 1534 the obstinate King took matters into his own hands: split his realm from the authority of the Catholic Church, denounced the faith, founded the Church of England/Anglican Church, and declared himself its supreme leader. Henry divorced his wife, dissolved all monasteries and convents in England (seizing their land), and was excommunicated by Rome.

King Henry VIII meshed the realms of church and state under his crown; he was now Protestant Christian, as was his domain. Unbeknownst to the king, the two faiths in his realm would violently clash in the English Civil War in the next century as well as throughout the continent in the Thirty Years War.

From Henry’s death in 1547 to the beginning of the English Civil War in 1642, the British throne was occupied by five different people. Three of the four surviving children of the reformer-King sat on the throne; the last of which being Queen Elizabeth I (r. 1533-1603) with whom the Tudor line died.

Political movements are only as powerful as their leader is charismatic or persuasive. When the dominant character that was Henry VIII died, the crown was passed on to his nine-year-old son King Edward VI (r. 1547-1553). Edward was raised Protestant and groomed in the beliefs of his father, though lacked age, experience, and charisma. When he suddenly died at the age of fifteen his half-sister Mary seized the throne despite being barred from succession.

Queen Mary I (r. 1553-1558) was devoutly Catholic, vehemently opposed her father’s reforms, and was endowed with the nickname “Bloody Mary.” Mary unsuccessfully attempted to restore Catholic churches and monasteries to their former glory (her attempts were thwarted by Parliament) and burned several religious opposers at the stake.

With Mary’s death in 1558, she was succeeded by her half-sister Queen Elizabeth I whom Mary also had imprisoned. A benevolent and competent ruler, Elizabeth quickly restored the Anglican Protestant Church created by her father but remained tolerant of the Catholics. Though charismatic and relatively stable, the “Virgin Queen” never married or produced an heir, ending the religiously ambiguous Tudor Dynasty.

A Monarchy at War With its People

On her deathbed, Elizabeth quietly named King James VI of Scotland, a distant cousin, as her heir. With her passing, the Tudor Dynasty was replaced with the Stuart Dynasty. James was directly descended from King Henry VII of England – the first Tudor ruler and father of the famous King Henry VIII. James, therefore, had a very strong claim to the English throne though it was not publicly acknowledged.

James ruled the entirety of the British Isles – sixth of his name in Scotland while simultaneously first of his name in England. Though his Scottish rule began in 1567, his English and Irish rule only began in 1603; his holds on both thrones ended when he died in 1625. James was the first monarch to rule over all three kingdoms.

James was a practicing Protestant though remained relatively tolerant of Catholics since they were a substantial political force, predominantly in Ireland. Keeping true to Protestant practice, James commissioned a translation of the Bible into English. This significantly contrasts Catholic tenets, which very strictly adhered to the use of Latin for all clerical affairs. The King lent his name to the English translation of the Bible, which is still in widespread use to this day – the eponymous King James Bible.

The Scottish-born king was succeeded by his son King Charles I (r. 1625-1649) who attempted to bypass parliamentary law and rule by decree. Charles favored the divine right to rule, which claimed a monarch as the representation of God on earth, paralleling the role of the Catholic Pope. Charles also married a French (Catholic) princess. It was Charles who reigned in England through the height of the Thirty Years War in Europe. The new King became increasingly unpopular and plummeted the country into the English Civil War.

The Thirty Years War in England

By 1642, war had raged throughout Europe for twenty-four years – any guesses as to how many years were left in the Thirty Years War?

Catholics and Protestants were decimating one another across northern and central Europe. In England, there were always significant tensions (especially through the abstruse reign of the Tudor family), but violence had not yet been elicited. The grievances towards Charles I shattered the kingdom and resulted in many different cities, towns, and municipalities leaning with different political sympathies. Certain pockets of the kingdom were Catholic and Royalist, others were Protestant or Puritan and Parliamentarian, and so on. The Thirty Years War had infiltrated England in the form of a civil war.

Both King and Parliament levied armies. The two sides first met at Edgehill in October 1642, but the battle proved inconclusive. The two armies strategically moved about the country attempting to cut one another off from supply, occasionally clashing to hold or siege key strongholds throughout the realm. The Parliamentary force was better trained – the King fielded mainly aristocratic well-connected friends – a weaponized a better logistic strategy.

With his eventual capture, the King was tried for high treason and subsequently became the first English monarch to ever be executed. Charles was executed in 1649 though the conflict carried on until 1651. The King was succeeded by his son Charles II. Despite a newly throned king, England was politically replaced with the English Commonwealth under the de facto rule of Oliver Cromwell – a parliamentary statesman who assumed the title of Lord Protector of England. The new king was exiled, and the country was ushered into a period of dictatorship.

Oliver Cromwell, along with liberal thinker John Locke, was a Puritan: a Protestant sect significant in number who advocated for a purge of all remnants of Catholicism from the Church of England. With the end of the English Civil War, Cromwell assumed the role of Lord Protector and acted as head of state of the newly declared (albeit short-lived) republican Commonwealth of England.

As leader, Cromwell promulgated a number of punitive laws against Catholics within the realm – small in number in England and Scotland but substantial in Ireland. Cromwell decried an official religious policy of toleration applicable only to the various sects of Protestantism. Though he took control of the kingdom in the wake of the Thirty Years War, he did nothing to ease the tensions that rippled due to the cataclysmic war.

In 1658 Oliver Cromwell died aged fifty-nine. He was succeeded by his much weaker son Richard (sound familiar?) who immediately lost control of the realm. By 1660 the monarchy had been restored to Britain with the popular King Charles II (the son of Charles I) (r. 1660-1685) returned from his exile.

So what does the English Civil War have to do with John Locke?

Historians, political theorists, and sociologists widely agree that the large-scale religious violence of the seventeenth century birthed the modern nation-state as we know it. From this era of history onward, states and countries began to operate in the fashion we are familiar with to this day.

The religious violence and subsequent religious persecution that was widespread on the European continent resulted in mass emigration. Those who desired the freedom to worship how they wanted simply left Europe for the New World. The Puritans became a sizable population within the early Thirteen Colonies in the years leading up to the English Civil War.

The English Civil War and the volatile religious tensions in Europe are the context in which political philosopher John Locke grew up. Lockian thought played a massive impact on the eventual birth of the United States. Just as diamonds are formed under pressure, John Locke formed his ideology based on the abhorrent violence he grew up surrounded by; he was the first political theorist to advocate for popular choice and approval of government. He also became the first to suggest that if a people disapprove of their government, they should change it.

Though he never lived to see it, John Locke is arguably the pivotal reason the United States upholds religious freedom and toleration in their Constitution.